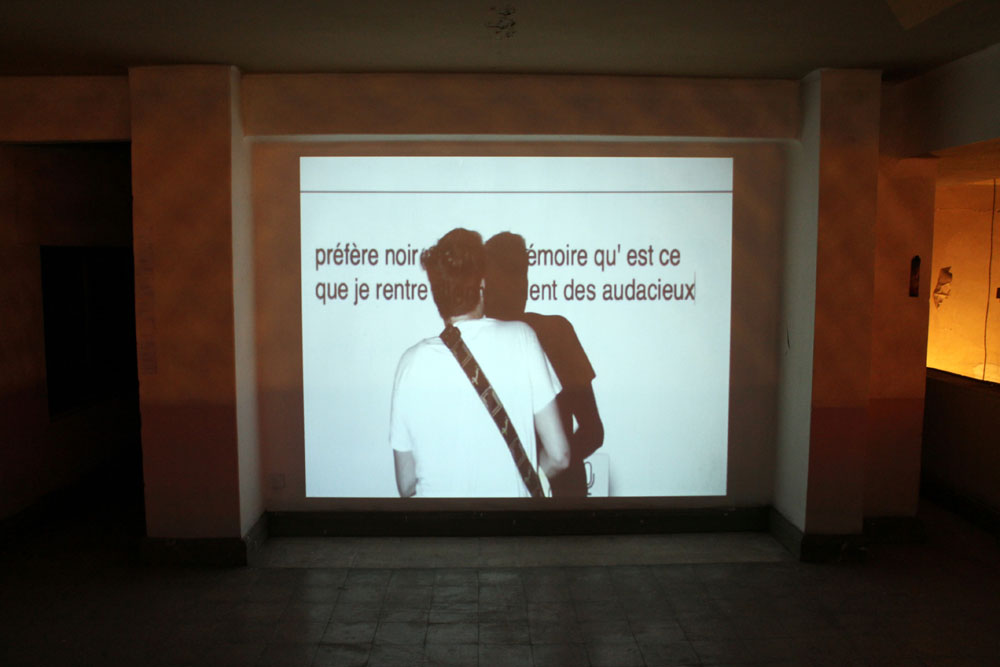 We interviewed Elena Giulia Abbiatici, curator of “A New Social Contract“, one of the projects engaged by the vision of the curator Simon Njami responsible for the Off Biennale Cairo initiative, this year titled “Something Else“. Various artists have contributed with their works, aiming to stimulate reflection on issues relating to an eventual re-thinking of the concept of society in the age of social media, and the possibility of reconsidering and updating the concept of humanity, from the starting point of Jean Jacques Rousseau’s Social Contract.

E.G. Rossi: When and how did the spark come about that motivated you to base the Bienniale project around the idea of a new social contract?

E.G. Abbiatici: In the words of Simon Njami, the first curator of “Something Else” and the person who gave the Off Bienniale its name, two powerful concepts were emerging: the idea of togetherness and a sharing of the tangible, in other words, a proper world to be explored and revived. So, there was the idea of creating a new space for living in a spirit of collectivity and joint participation. And in this new space, where openness is at a maximum but maximum input is also required, I immediately saw a place for a hypothetical new social nucleus. In other words, a group of individuals who decide to get together and build something different based on attitude rather than performance. The fact that we live in the age of social networks, where everything becomes “social” and shared, overly superficial, made me question the meaning of being social and of making society in this “augmented era”. Rousseau’s logic of general will can no longer hold – it was already difficult to sustain in the late eighteenth century – what is needed is a beginning, or perhaps a new beginning. We need to start eliminating all the structures that allow the continuance of state and governing systems which are distant from the needs of citizens, instead of placing them at the centre, and thereby to see what individuals need, and to build a new general will, taking into account what is social, what is social network and how the two can be related.

As an image I have chosen the pianist of Kiev, who played his music to riot police during the uprising in winter 2013; it’s not dissimilar to the Gezi Park protests in Istanbul a few months previously, with guitar chords, flowers and poetry declaimed to police by the protesters. It’s people’s ability – which Egypt experienced even before that, during and after the Arab Spring – to stay united through culture: the determination to accept, understand difference and change the structures imposed by governments, building a new community. 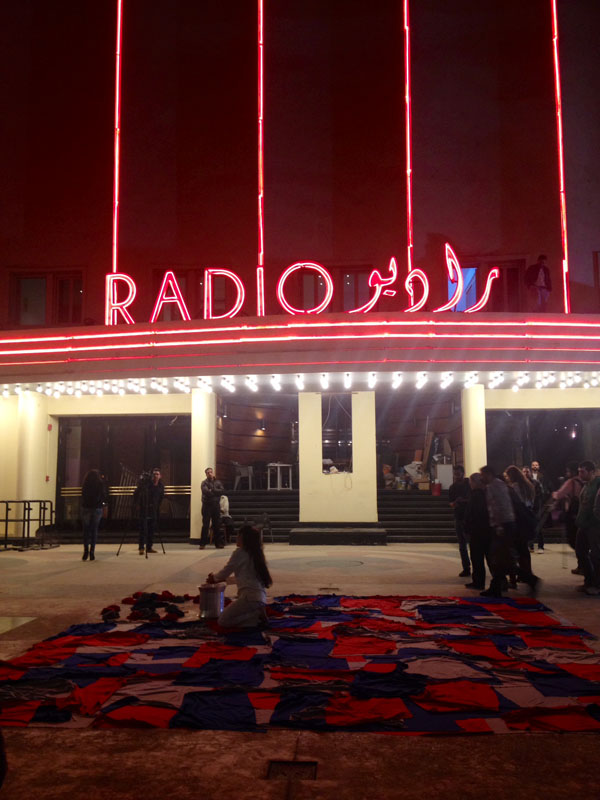 How does your project fit in within the Off Biennale? Is there a continuity of thought between the various projects?

All the projects in this Biennale started from the curatorial outline drawn by Simon Njami. There’s the idea of a new space to be inhabited, where different elements can be made to coexist; the question of how to mould fragility and give new direction to the lack of freedom of expression, how to synchronise individual and collective rhythms. Identity and the building of the self vis-à-vis a climate of unrest. The creation of new blueprints for present and future in postcolonial areas such as Latin America. The relationship between the personal and the political in the various ways of experiencing the real world. I was very struck by Jean Lamore, an excellent thinker, writer and artist, who has a series of notes and diaries in the exhibition. A couple of examples: “The impotence of the individual has never been greater than when faced with the world’s administration” and “In antiquity, nothing was more feared than exile. It was the ultimate form of punishment, feared more than death itself. Paradoxically, an equal number of people now live in exile”. I believe these statements sum up very well the idea of wanting to leave a place that doesn’t belong to us and move confidently into something else. “Something Else”, in fact, something new, more in method than in form. 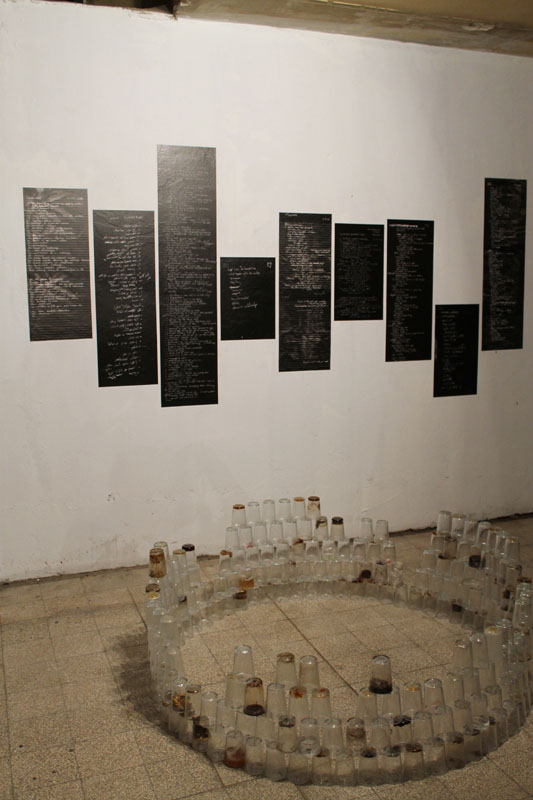 Many of the works presented are proponents of a transnational condition, driven by the nature of the global society. A lot has happened since you conceived the Bienniale project. Do you think that a democratic, open, transnational system is still possible, and desirable?

I believe that an open and transnational – or post-national – system is always desirable because it means rethinking, exchange, exuberance and evolution. Certainly in this opening or levelling of borders, or rather, this refusal to belong to paradigms which are already over-defined, the risk is that you generate dissatisfaction in those who have a more definite vision of the system, and thus fall into dangerous territory.

In ancient Greek the word pharmakon (hence pharmacy) refers to both the poison and the cure. The state “beyond nations” as a new pharmakon is seen as poison by those who want to preserve what can be salvaged, albeit frozen, but not contaminated. Similarly, the social networks, with their unchecked impulse to debate and the circulation of information, may be intolerable for those who prefer to stay in the slow lane, afraid of being sucked in by the dizzy speed of the Web. The real challenge would be to turn the possible into the real, the virtual into the actual. And for me the possible includes not belonging to any religion, system, nation or political movement. At the very least limiting their power to run individuals’ lives, the arrogance they possess and their ability to describe a human life or inscribe it in preordained clichés. How much longer must a person’s value be determined by a document, a label, a business card? During a press conference someone asked Simon Njami how many Egyptian artists had been invited. His answer was clear: “I haven’t counted them, I’m not interested in any kind of nationalism, but if you like, there’s a job for you”. 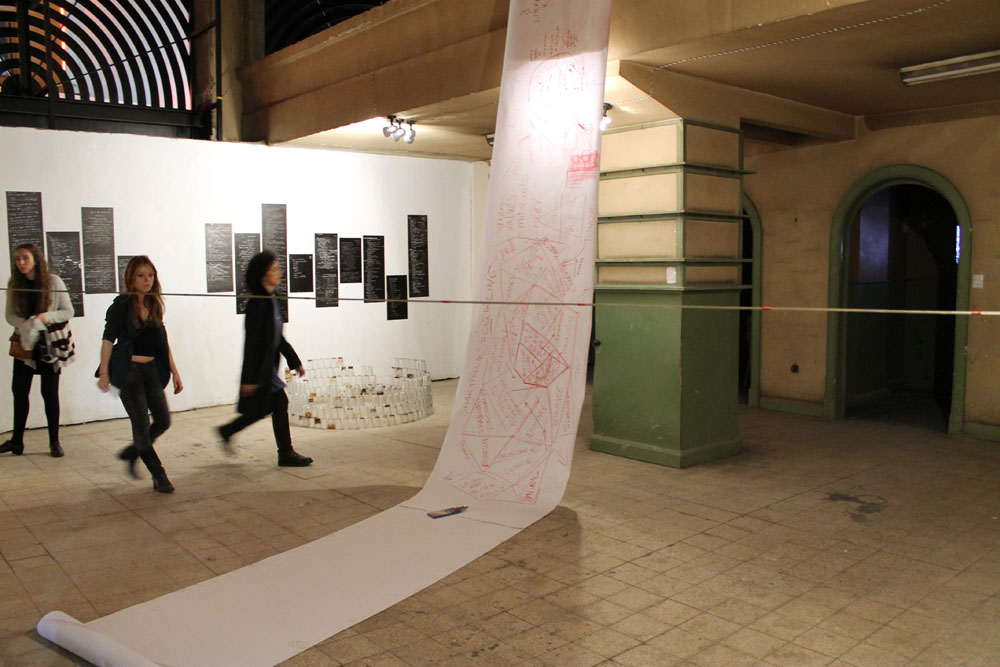 This brings us to your project “The Nationless Pavilion” at the Venice Biennale and now here in Cairo. Can you tell us how this project came about, how it fitted in the context of the Biennale and how it translates to Cairo?

“The Nationless Pavilion” was born from the bosom of the Venice Biennale and its system of National Pavilions, which is still stuck in an old-fashioned idea of nation. With Sara Alberani, Caterina Pecchioli and a considerable number of partners (Open Society Foundation, Lettera27, Archivio Memorie Migranti, Free Home University…) we constructed at the Magazzini del Sale Docks a space where we could think again about what it means to be a resident or a citizen of a nation; how the nation we are born in determines our identity and perhaps our destiny, yet without helping to say anything about us, in fact, limiting us. We worked with a lot of young refugees, mostly in Venice, Lecce (where we have Nationless Pavilion workshops) and Rome, in order to make the Pavilion a space that’s inclusive, not merely descriptive. Personal memories are intertwined in the workshops, which, among other things, resulted in the creation of this “totemic map”, now on display in Cairo. It concerns the “Nationless Social System”, and is the result of a workshop run by Denis Maksimov (founder and leader of the Avenir Institute): a deconstruction of the model of the traditional state, moving towards a molecular reconstruction of society where borders become places of sharing and where the logic of movement and free thought underlies every particle. With Sara and Caterina we also launched the artistic platform “Nation25”, with the aim of examining experiences of migration, marginality and invisibility, and to shed light on such a vast and dislocated territory (that of political refugees, a population which would be the 25th largest nation). Nation25 is therefore that “something else” for those who no longer identify with the logic of nationalism. It’s open and it receives, even without documents.