by Giona Ferrara
in focus 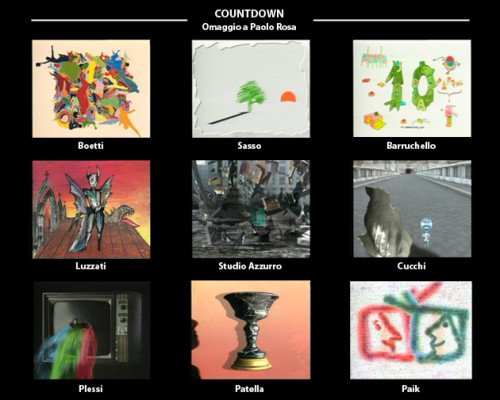 The symposium on the Camerino Festival, organised by Silvia Bordini and Francesca Gallo at MLAC (Museum of Contemporary Art of La Sapienza University in Rome) on 20 October 2017, has made an important mark on creativity in Italy, always anchored to its image and inherently linked to its classical tradition.

Today Italy is still behind when compared to the world’s electronic avant-garde. Is this because of the abundance of secular art forms? Or could it be skepticism towards diminishing thought processes? Or the love for Michelangelo, Leonardo and Caravaggio? The fact remains that, despite a few exceptions, Digital Art has been slow to take hold in the collective Italian imagination and a day spent remembering those who have tried and succeeded in the field must be good for students.

Claudio Zambianchi (Director of MLAC) opened proceedings and then handed over to Paola Castellucci to moderate the first session of this intense day of critical debate and reflection on the pioneering heritage of this union between art and science. The “La Sapienza” Professor Silvia Bordini was the first to talk about her own experiences between science and technology, providing a general introduction and review of these new forms, ideas and technical skills, mentioning software such as “Homage to Lisa” and introducing the concept of hypertext with accompanying audiovisuals from this period as examples. An excellent archival overview of the Festival’s first two years was then presented by Francesca Gallo, lecturer in contemporary art history, who looked back at the period defined as the Electronic Renaissance and its new postmodern images. This was inevitably followed by the Manifesto of Italian Computer Art, presented by Enrico Cocuccioni in the form of video extracts from the Locarno Festival of 1985. Coming from classical art studies he now identifies with a universal algorithm of artwork in line with his interests. Professor Sandra Lischi from Pisa University also took part in the symposium, focusing on a Video Art norm as a case for communication and, starting from the relentless succession of festivals in the 80s, asks: Who were the sponsors? It would actually be interesting to conduct research into those first financial backers of the artistic avant-garde who believed in novelty.

In the second session Silvia Bordini returned to moderate and introduced Valerio Eletti who offered an overview of the evolution in computer technology, starting from games, through ASCII Art to multimedia content and interactivity, concentrating on “Pixnocchio”, the first Italian work to win at “Siggraph”. Paola Lagonigro followed with an interesting reading of some pages taken from “Video Magazine”, where the research, passion and dedication to the experience of art in contemporary society was evident. Gianni Blumthaler concluded this session by highlighting some of the issues in New Media Art such as, in the first place, the conservation or sale of artwork: “What can we give the buyer that does not transport us to another art form?”.

The task of refreshing listeners’ minds, however, was carried out by a round table event and the screening of a selection of Computer Art works presented at the Camerino Computer Art Festival. Valentino Catricalà (Mondo digitale, Rome) chaired this event and introduced the speakers: Mario Sasso, aiming to render the immaterial image material; Adriano Abbado and his musical approach; Pietro Galifi, who accidentally found himself part of a project at Camerino which he initially thought was “far-fetched”; Antonio Glessi, who used graphic novels as a point of departure to explore sectors; Paolo Uliana, coder of sounds, shapes and their random numbers; Fabrizio Savi, who connects light with external sound; and finally, Michele Bola who, with his highly critical intervention, demonstrated a great work of Computer Art.

From this intense, edifying day the work undertaken by the Camerino Festival from 1983 to 1990 merits appreciation, as it anticipated multimedia art, a new global visual motor that has become part of today’s language, both in discourse and action.

«Memory of Computer Art in Italy. The Camerino’s Festival of Electronic Art Festival Art», took place at the University “La Sapienza” in Rome on October 20th, 2017, curated by Silvia Bordini and Francesca Gallo. After announcing the event through the press release, Arshake proposes a series of reflections so that the memory that was built by gathering the protagonist of the event can continue in the digital flow, also through the reflection of the younger generation. The firs one, by Angelo di Bello was published on Arshake on October 17, 2017.