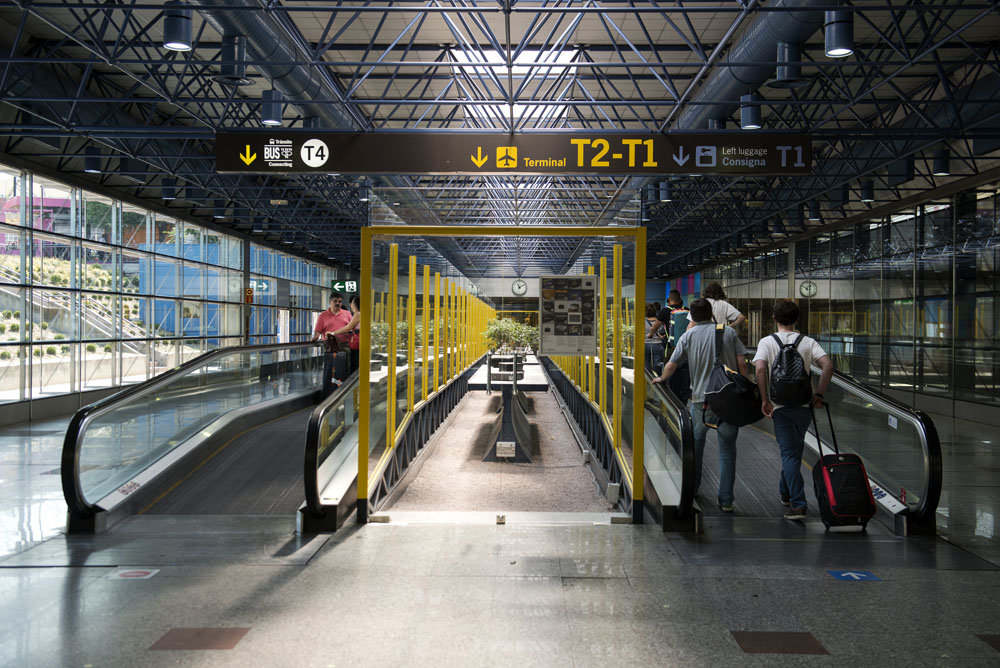 The time we are living in is characterized by travel and mobility. Some of us travel by choice while others are forced to in order to escape turmoil, famine or climatic disasters.

Mobility and the possibility of travelling through space and time. We have to conceive a space without time but never a time without space. Time needs things or the constant motion of thoughts in order to exist. In other words, to redesign concepts within new mental spaces.

Fabio Mauri’s 1993 work Il muro occidentale o del pianto (The Western Wall or Wailing Wall) tells us of prejudice and barriers through a wall of suitcases, generating a paradox between the idea of travel – which is naturally a transmission of ideas, cultures… and that of the walls being constantly raised between peoples and ethnic groups. 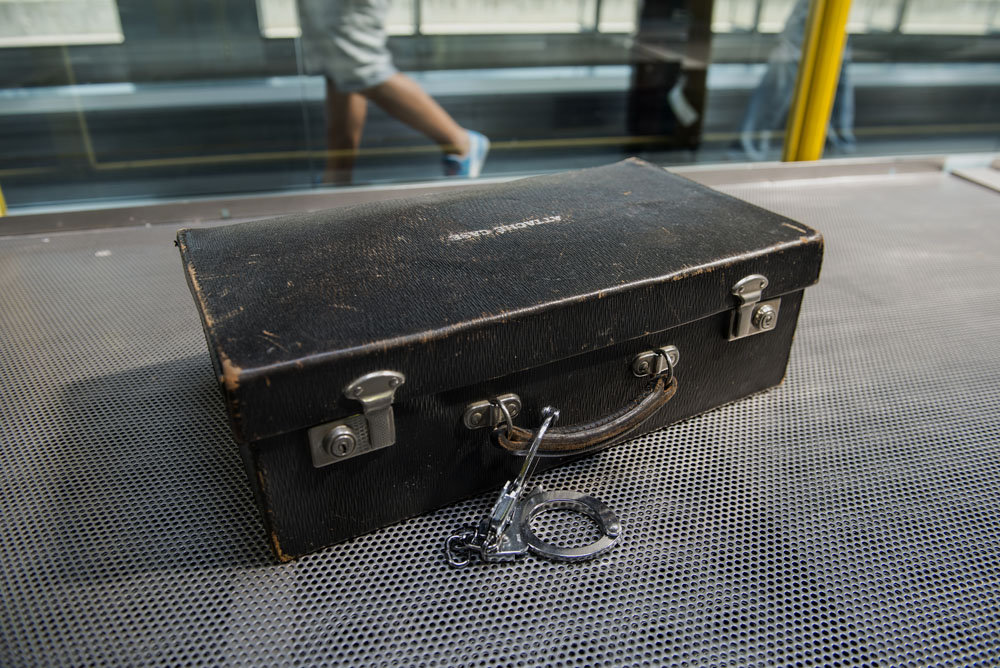 We can still identify with the work now in 2015. Marcel Duchamp’s Boîte en-valise (1941), the leather suitcase filled with miniature copies, colour reproductions and a photograph of the artist’s works, is another obvious reference if we take a close look at “Valise Diplomatique Low Cost”, the itinerant project by Spanish curator Nilo Casares: 16 suitcases for 16 artists for 16 airports to be compared with the standard carry-on luggage of international low cost travel.

The British architect Cedric Price had worked on curatorial and architectural solutions with light luggage capable of activating places of learning and participation which could lead people to speaking together in public places where knowledge and energy are shared like Cities on The Move and Floating City.

Nilo Casares’ idea does not seem to be very far from this: exchanges of thoughts and reactions in all airports where suitcases make their landings, as well as a reflection upon the changes cities become familiar with – beginning with constant experiences with of and migration. Here a city fits in a suitcase’s handful of centimetres. 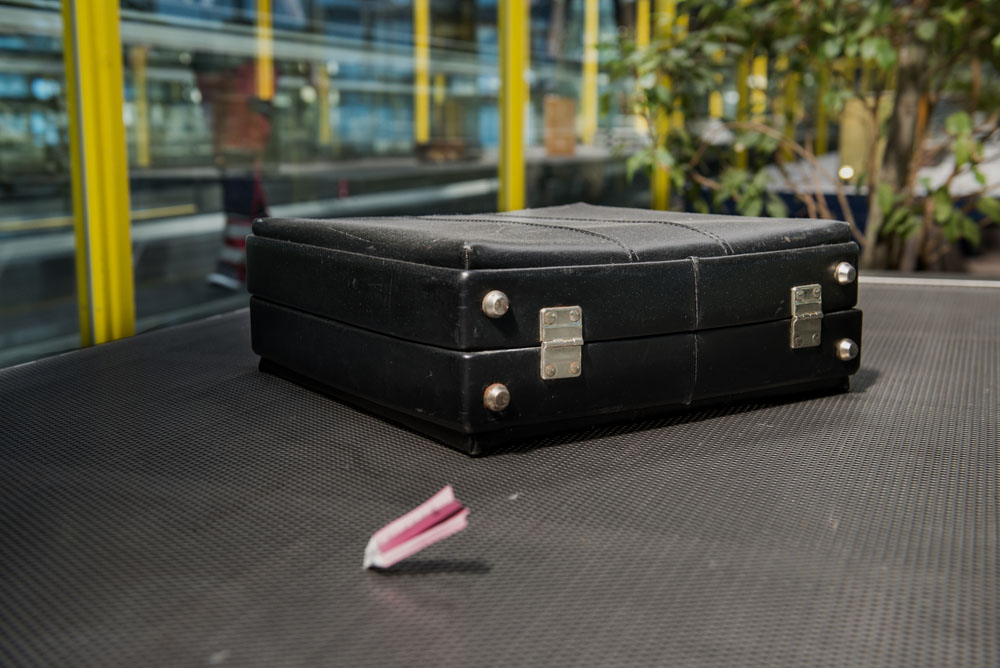 This circular course brings me back to the video ‘The way things go’ by Fischli & Weiss, in which a chain of machines are activated by reaction. To represent human dynamics. In the “Valise Diplomatique Low Cost” project, the suitcase is the traveller headed for a destination (and that never arrives) – a destination that drives it to continue travelling, the true purpose of travel. It brings up the question that perhaps we too are baggage in transit along a collective voyage.

This is an exhibit that penetrates into another structure: the one of the airline companies and that of airports which become a heterogeneous situation in which other methods of outfitting and purposes are combined. Suitcases are portrayed as catalysts of actions, elements of ubiquity in the middle of things, at the heart of nothing and passing through many places and times.

The issues addressed are: migration flows (Isabel Löfgren & Mats Hjelm – Stockholm, Peter Burke – Melbourne,  Carla Cruz- London), the difference between time and money, the former being not combinable and transferable, and the attempt to cancel is with a suitcase filled with singles (banknotes) in 60 minutes ( Gustavo Romano – Madrid), censorship (Rute Rosas – Oporto), the bioelectric nature of organisms and the human acoustic system (Arcangel Costantini, Mexico), the accumulation of data in our global society of information (Ciro Museres- Buenos Aires) and the paradox of long-distance love – “High-Cost Lover” that must count upon low-cost travel companies (Luigi Pagliarini – Rome)! 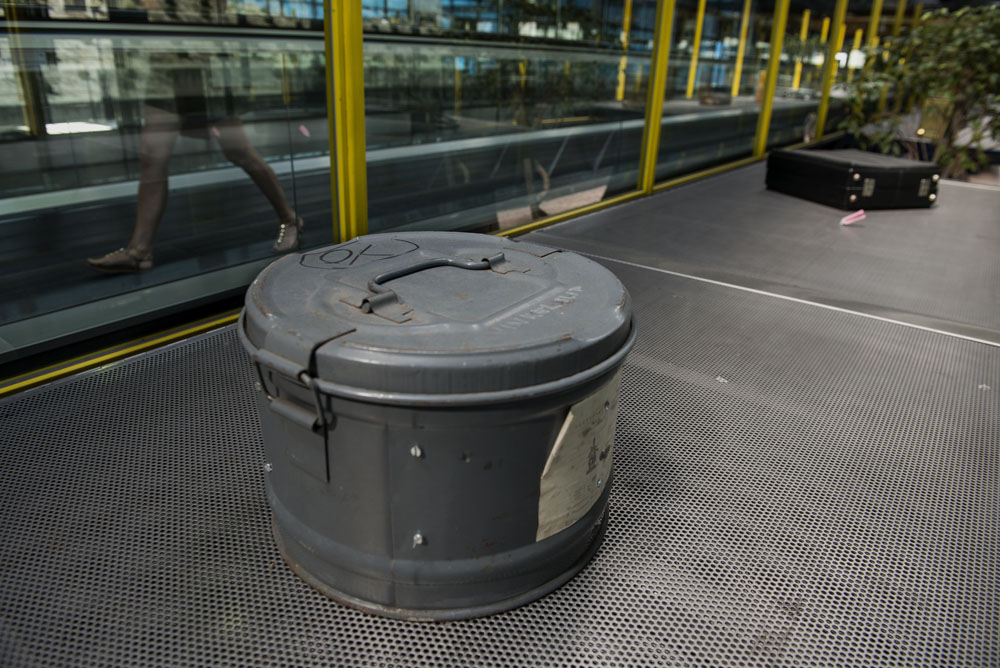 And so, “Valise Diplomatique Low Cost” might suggest to – first and foremost – “transferring our thoughts” (as Paul Ricoeur would put it). On display at the Madrid airport from 8-28 June 2015, these works will also be exhibited in Rome, Paris, Munich, London, Stockholm, New York, Montevideo, Mexico, Santiago, Buenos Aires, São Paolo, Melbourne, Istanbul and Oporto thanks to the sponsorship of ART-EX, a programme by the Spanish agency of international cooperation for development.