A one day seminar with artists and theoreticians to talk about television and creative experimentation.

Scholars – Francesca Gallo, Paola Lagonigro and Martina Rossi conceived a workshop at the University of La Sapienza in Rome to recount when television was at the centre of creative experimentation. In particular, the workshop explores what it means to experiment in full, at a time when companies provided studios and equipment, aware that experimentation leaves no space for an organisation defined in terms of time and that such an approach necessarily involves some failure.

Artists take part in several ways in TV programmes, devising opening sequences, graphics and sets, but they also experiment with material that is never broadcast, some of which will be shown and commented on during the day at the workshop. Television, in fact, has represented both a communicative model from which to distance oneself and, at the same time, a new medium to be explored in its linguistic and technical features by graphic designers, painters and sculptors, interested in particular in electronic arts. 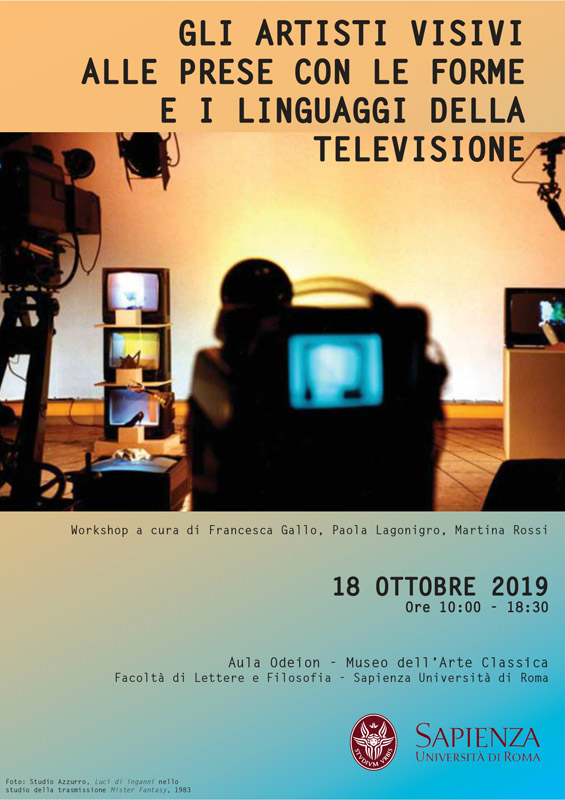 Pioneer artist Pietro Galifi will tell the thirty-year story of electronic images, from analog TV to online streaming. Scholar Martina Rossi will talk about Pino Pascali’s television sets while Fabrizio Plessi’s sculptures on TV will be the focus of Paola Lagonigro’s talk, Bruno Munari on TV. Silvia Moretti will discuss Silvia Moretti’s poetronics. Chiara Mari will talk about Giulio Macchi, a television author in conversation with contemporary art, while Pasquale Fameli will examine art on TV during the nineties and Blobcartoon. Marco Maria Gazzano will talk about Mario Sasso’s experiences with television experimentation, including pioneering opening sequences on television and his mixing with traditional techniques. Ugo Nespolo’s The Tel(e)visions will be the focus of Anna Luigia De Simone’s talk. These and many other contributions are intended to remind the audience of and discuss a completely experimental phase of television (and technology in general), an experiment that over the years has transformed itself when dealing with new technologies. Today this experimentation is often flattened (not always), reduced to a passive or mannered use of technologies. Individual speeches will be interspersed with discussions with leading scholars, including Valentina Valentini, Raffaella Perna and Tommaso Casini from IULM in Milan. Casini will close the meeting in the evening together with the scholar Francesca Gallo, one of the workshop curators.