His work moves between techniques and disciplines in the constant search for a connection between the inner and the outer world. Known for his installations made with bread, his participation in the Terna Prize coincided with the entry of his research into a new phase that leaves matter in order to move and operate in a mental dimension, although while continuing to experiment with more varied materials. This marks the beginning of a process of research aimed at the creation and visualization of new symbols, new phonemes and new grammatical conventions that could orchestrate a new language that is a summary of humanity throughout the course of its evolution. «The true mother of this research» –  said Reimondo when discussing his creative process in a recent interview with Neve Mazzoleni, «is the production of symbols.» The artist continues, «I strip the words from the superstructures to get to the visual and instinctive essence – summarizing, cleaning.» Poesia di tre metri, the work with which he participated in and won the Terna Prize 05 in 2013, is an installation of pipes of various sizes, which make up a cloud. As part of this phase of research into language and phonemes made with different techniques and materials, Reimondo, for the first time, introduces sound. Setting out from the idea that sound is matter, the pipes blow sounds and words in their own language. Sound is represented here through a visual rather than an auditory aesthetic.

His work has been exhibited in Italy and abroad, in galleries such as the Di Meo Gallery (Paris 2010), Gian Enzo Sperone (Sent, Switzerland 2009), Julie M. Gallery (Tel Aviv 2008), Ermanno Tedeschi Gallery (Turin 2007) and international events such as the Second International Biennial of Malindi (Kenya 2008), the Visual Art Bath Fringe Festival (Bath, UK 2004) and the Ninth Bienniale in Cairo (Egypt 2003). The interview took place in his Milan studio on June 10, 2014. 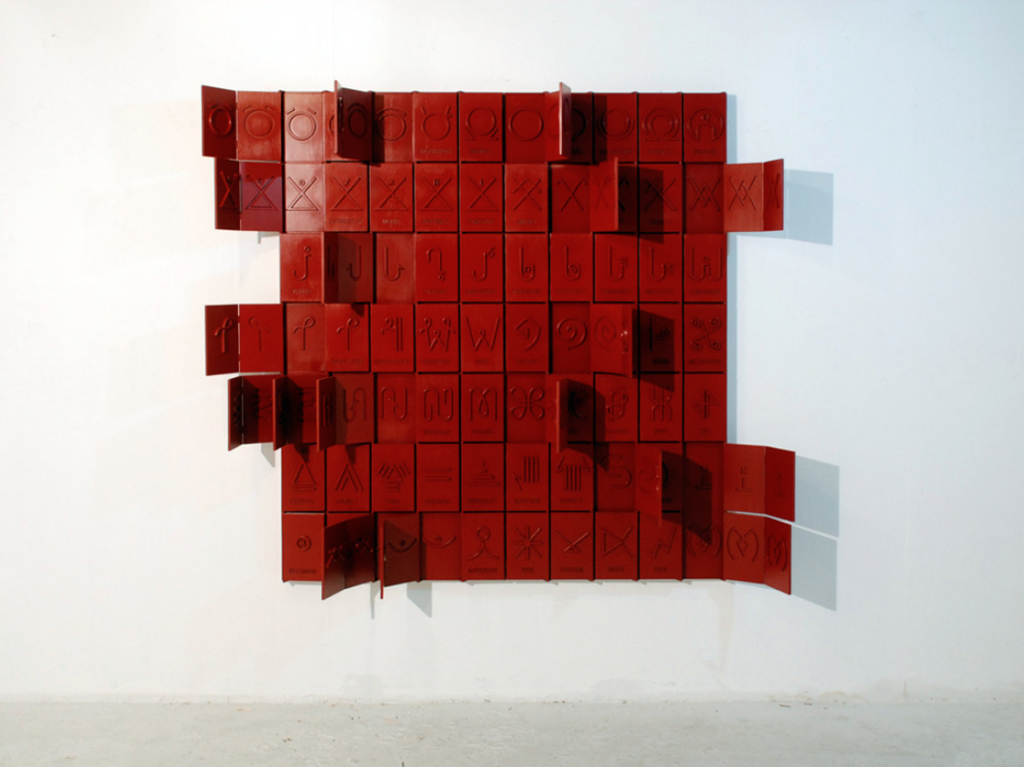 What is the role of the artist in the current art world and society?

This is a time of great change. Much of the contemporary world is literally being recreated from scratch. In this context, artists are looking for a new position and, though our instinct perceives that there is something in the air, no one has found it yet. So I do not have an answer. What I can see is that artists need to be more eclectic, to know how to move between the different fields. One of these, for example, is linked to the social sphere and goes by the name of “public art”. There are artists who collaborate with other specialist figures, such as scientists, philosophers and scholars. Others, however, prefer to be alone, locked in the studio because their research requires them to live within a more intimate dimension. I believe that artists should not belong to one or other of these. They must be agile and fast moving in all these areas, getting out and about, working with different realities as well as researching the most intimate dimensions.

I believe that the crisis has toned down the excessive euphoria that has characterized the art world in recent decades, and has forced it to place its feet squarely on the ground. Along with the difficulties of the moment this has brought great benefits to artistic growth, restoring an awareness of who we are and our economic situation. Of course we are seeing a lot of pressure on the artist to take up a position within the social context. As far as I’m concerned, commitment and presence in the social sphere is important, but I also understand those who are engaged in pure research, aimed more at an individual dimension. 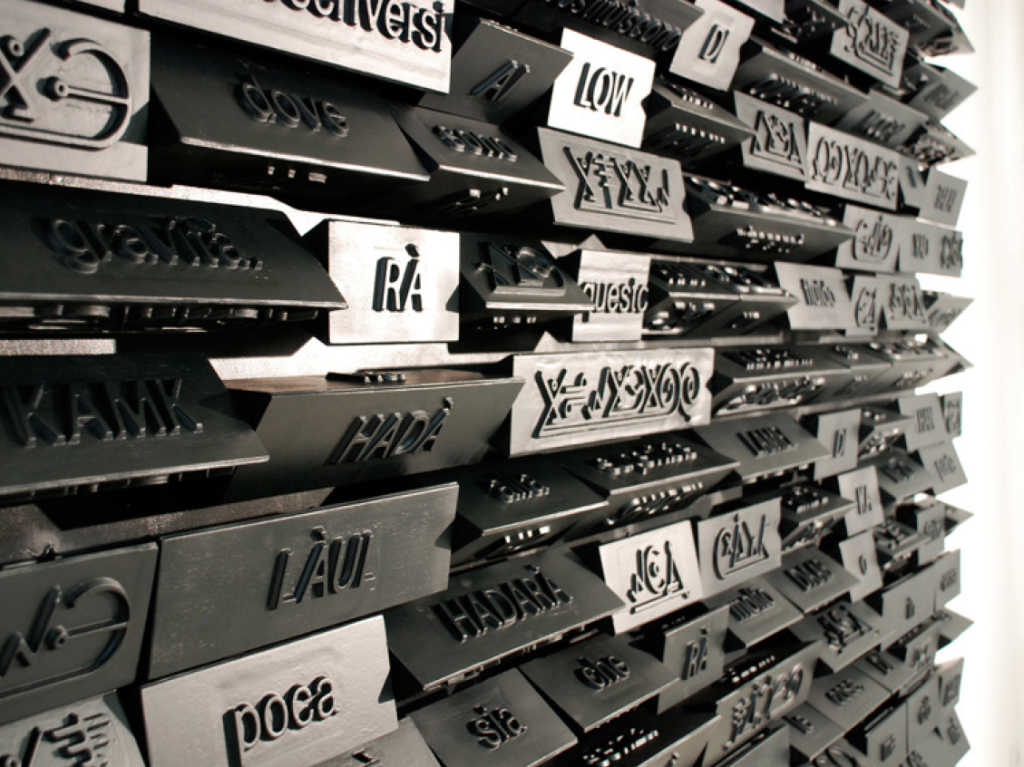 What did your participation in the Terna Prize mean for your experience and research? What real opportunities has it generated, including in the marketplace? (Examples)

The Terna Prize was a wonderful experience. Let me admit one thing: I did not expect to win it. I entered because for some time I had ventured into a new phase of research, different from the one involving the use of the bread with which my work has been known on the Italian and international scene and with which I was strongly identified. So, what better showcase than the one offered by the Terna competition? Reaching the final for me meant being able to present a new moment in my research, a new evolution of my work beyond what I had achieved with the bread. I won the prize quite recently and so far there have been no changes in the work with regard to the interest of third parties. I am confident that they will come into play in the near future and I would be happy if this could also happen with Terna itself.

At a bureaucratic level, we artists do not fall into any category. The first step is to recognize that being an artist is a profession. It’s a cultural issue. Italy never looks too fondly on things that are new. It is a country which is linked to its history and rather hermetic. There are different approaches but these are one-off cases and they are often private initiatives.

For the State, art does not exist. Art and research are not valued at all. Given that now the world is easy to travel around, we have to think about the world as a whole. Maybe we need to leave and then perhaps come back later. Nowadays, speaking of Europe, I would go to Berlin. There is a system there that helps one to train as a researcher in all fields, even in art. Suddenly, if you show that you are serious, you are recognized as an artist and you are given facilities right away. Then of course there is London in England.

My past work was very tied to physicality, to the body, as a human, as flesh, which I represented metaphorically with bread. In this new work, however, I want to deal with thought, the way a human thinks using different forms of language. It is all based on the evolution of language as expressed through well-established rules as well as through the breaking down of those rules.

I’m trying to experience in a relatively short time what humans have experienced over millions of years. I like it because it is a work in progress, and there are always new discoveries. I’m trying to communicate with external realities in the world of art that can influence my work and make it grow. I’m currently working, for example, with deaf and dumb people who interpret my symbols and I am shooting a video of this. I’m very focused on exploration and experimentation. I have embarked on a journey and I do not know what the final destination is. Every day and every experience becomes an enriching feature of my research.

What materials, techniques or technologies that you have not yet used could whet your curiosity as possible “matter” for your symbolic universe?

Many times I have ideas that I cannot bring to fruition, because they would require a lot of funding. In particular, I would love to begin to learn about the area of the grapheme. I have a utopian project, which is to cast a shadow puppet onto the moon. I don’t think I’ll ever be able to do it! It all starts from what I would like to communicate at that time and the material comes to me as a result. I choose the one which is best suited to expressing what I want to express. At the moment the grapheme attracts me, and I’d also work with science. 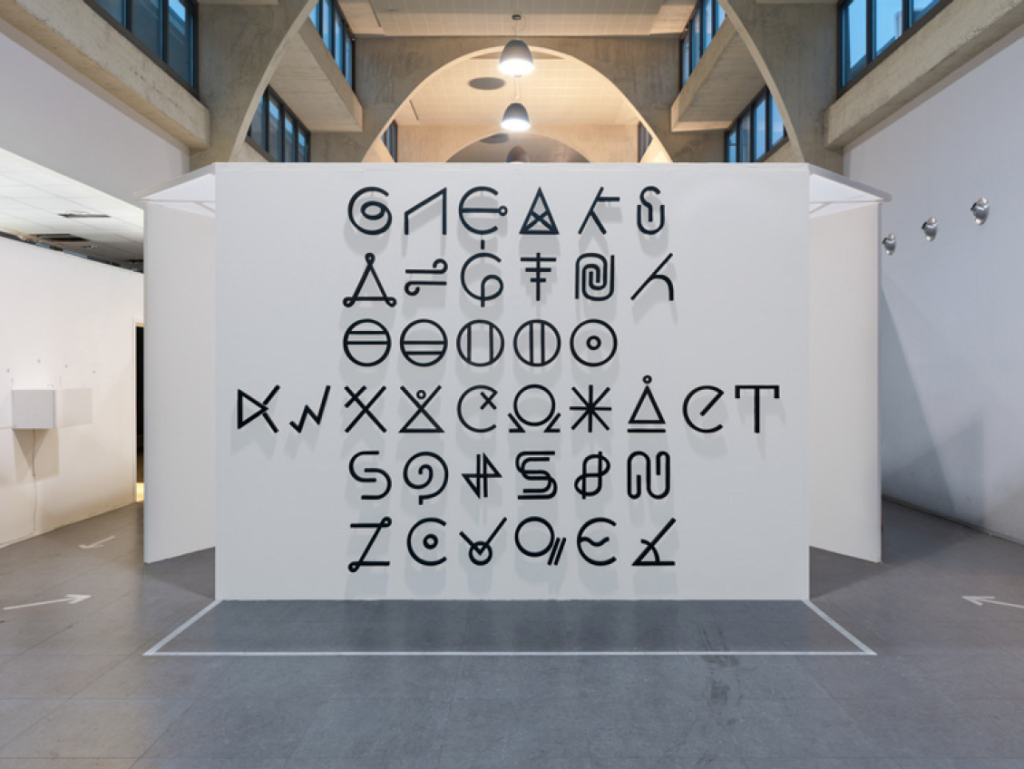 From the works made with bread to the sound installation in the work you entered in the competition, how do you handle the documentation and preservation of works?

When I start a work, I conceive it instinctively. A work sets out from your basic knowledge, is enriched with the suggestions from friends and is then perfected at a later stage. What I did with the bread was simple intuition: resin has also led me to a conceptual discourse. The first resins were, in fact, toxic. They could not be touched and yellowed over time. This material then evolved into more sophisticated resins, now non-toxic, whose shine lasts without yellowing as much.

Always keeping in mind that a work must stand the test of time, indeed the thing that fascinates me is that an idea is a product that can be reproducible. The value of this reproducibility is still a doubt for me, rather than a certainty. For the Chinese, copying is not bad. We are mentally linked to ancient thought. The East is much less so. My work on pipes, in my opinion, can also be reproduced in a thousand years, so it is important to preserve the audio recording. If it does not last, it could be made exactly the same way. In fact, it depends on the value that we give to the message arising from the beauty of what we did: the work involving tubes with voices coming out of them is the idea. It really fascinates me to think that the preservation of the object itself is not important, but rather the idea: if it is remade in five hundred years’ time, the idea will still be there.

The way it is structured, the Terna Prize is a very effective Italian institution because it is open to everyone and because the work that wins is the one that is considered most appealing at that time. I am very happy to have won it. In professional terms I was competing at the highest level. As artists we have been very pampered, on this we all agreed. My advice is to eliminate the second and third prize, because art is not the Olympics. 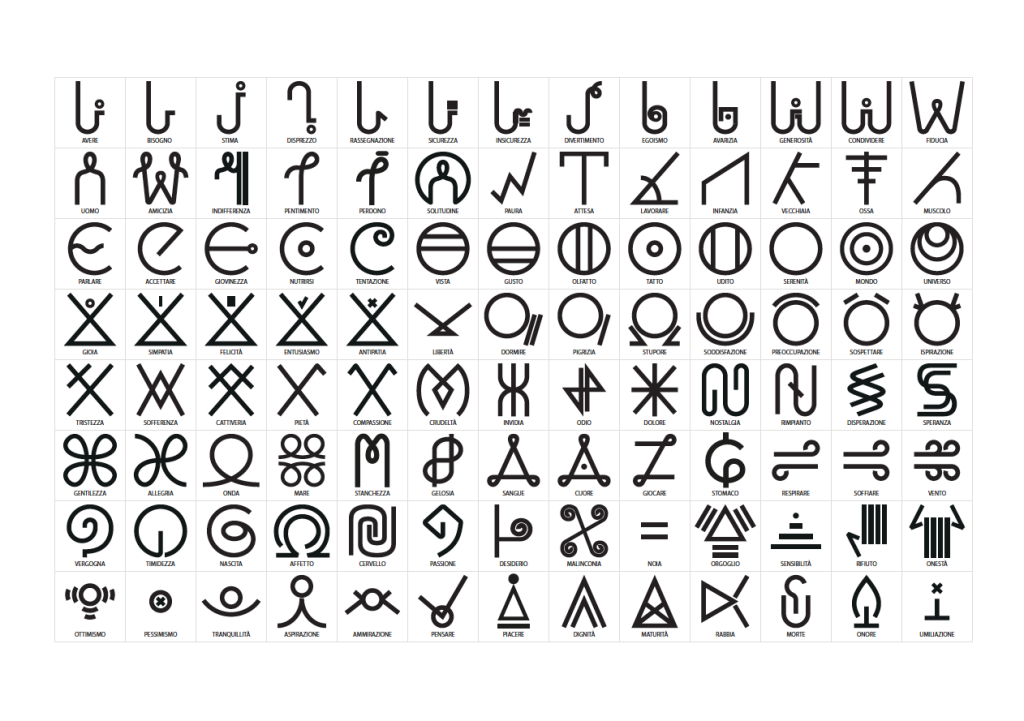