Rocco Dubbini was born in Ancona in 1969 and studied at the Accademia di Belle Arti of Urbino. He currently lives and works in Rome. It is difficult to classify his aesthetic expression as a trend, style or language: he works by experimenting with reality (in the anthropologic, social, individual sense) and the mystery concealed within it, using different media in an assiduous experimental process that continually aims to exceed the limits. He communicates through the installation media form, in which he combines video, digital photography, sculpture and performance to create projects that are lucidly thought-out and endowed with a high level of rigorous form, presented using a minimal, meticulous lexicon. This «lucidity» and formal coherence corresponds with a transversal sense of concept, based on continuously overturning the vision and the sense, creating polysemous texts and alienating the senses, presenting layered readings and interpretations that fail to create clear impressions, but are designed to open continuous questions which fail to provide as many answers. If it is possible to identify a common thread in terms of the themes handled throughout the artistic career of Rocco Dubbini, this could be traced to his «insistence» in facing up to diversity, proposed as a quid full of enigmas and fascination for all that which is different from us. His works simultaneously attract this and push it away, generating contrasting sentiments that promote emotional and intellectual thought and encourage us to consider who we are and all that which is different from us.

Termosifone acceso, the work which was among the winners of the Terna Prize in the Megawatt category is a photograph of a lit radiator made of wax, which burns out slowly, releasing light and therefore energy. «The radiator combines the archetypical and intercultural value of the candle with the value of modernity in everyday life. In this work, energy is generated by the crystallization of heat, light, nature, sanctity and form. Termosifone acceso is a layered presentation of the epiphanies of energy that generate a perceptual short circuit, in turn activating a complex form of thought, or energy» (Rocco Dubbini). 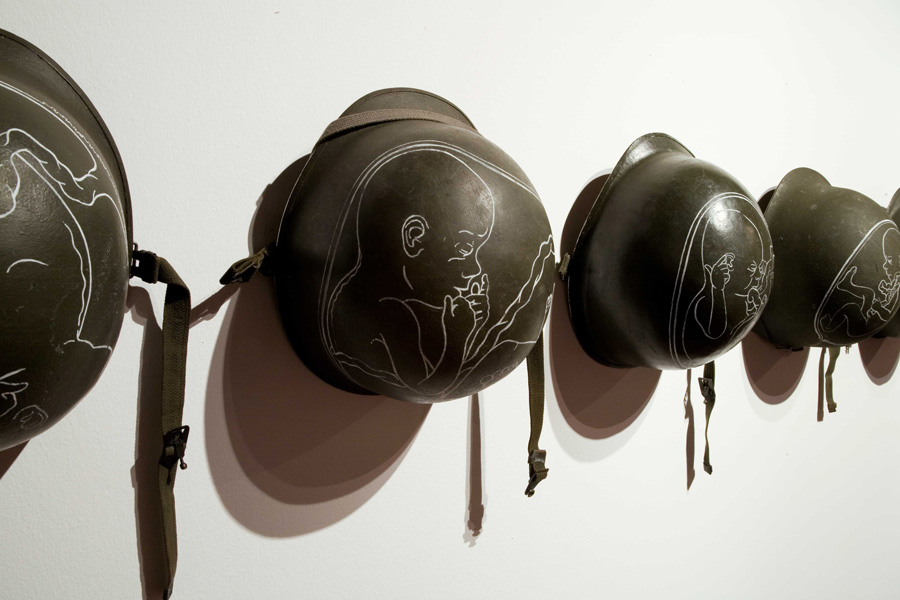 What is the current situation of art in Italy? What role does an artist play in the current art system and in society?

Contemporary art in Italy over the last few years, one would have said long ago, cannot be classified because indeed no situation exists. There are only independent bodies, motivated by the spirit of a few die-hards attempting to organize an artistic culture that can become the heritage and a stimulus for society as a whole. There are museums scattered around Italy, very often driven by the skill of their individual directors, who have been trying for years to make the accounts balance, on miserable wages. These figures produce the only intersection visible between the entities in our country, between local and national culture…..then all the rest is just wasted energy, purposely managed in an amateurish fashion.

Years ago, Veneziani said that in the end, all this turmoil would only have served to promote the sale of paintbrushes, canvases and paint. But as far as the artist’s role is concerned, as always, it is still being defined. Each era has produced its own particular type of artist: this era is over-producing artists, artisans, artificers and authors. When I think about the artist’s role, I always loyally return to make a comparison with Yves Klein, Piero Manzoni and Joseph Beyus. As far as my own work is concerned, I’m not very sure what my role is, but I would say that I do tend to always think a little in advance things that others fail to see and feel. Maybe this could come in useful for society, even if only as an element that encourages it to stop and think. Compared with what I was expecting, and considering the historical forms of innovation that were created up until the 1970s, I think that in the end, the contemporary art scene is a bit disappointing. I believe that one important example which shows how we can understand the role of the artist and of Art at this time is indeed the extremely interesting interpretation of the Biennale di Venezia by Massimiliano Gioni.

This is a difficult question to answer: are the dominant rules those set by people who believe that art exhibitions are the occasions when artist, gallery, system and economy come into closest contact? What about the positive data relative to sales of work by consolidated 20th century artists and everything else that has little to do with contemporary research?

And the same five Italian curators who are always the ones given the possibility to develop funded projects? And the same handful of artists who always win the residencies or competitions?….etc……etc….for me this is the dominating system that currently rules us but we have to just get on with our work far away from these definitions. If we assume that the dominating system is not an identifiable fixed point, I don’t believe for a minute that artists have moved the focus of their research towards problems and themes approaching social issues, even if in the end art is inevitably social. To tell the truth, over the last few years I have noted a widespread aesthetic development that is obtained from social culture: this matter can be placed alongside a form of aesthetics of communication stressing certain types of content which later influenced artists in their production and the public in receiving them light-heartedly, but this is not commitment. We would need to know a little more about communication and have read Perniola to understand what the medium means to express, and the same goes for Branzi’s design and interpretations. 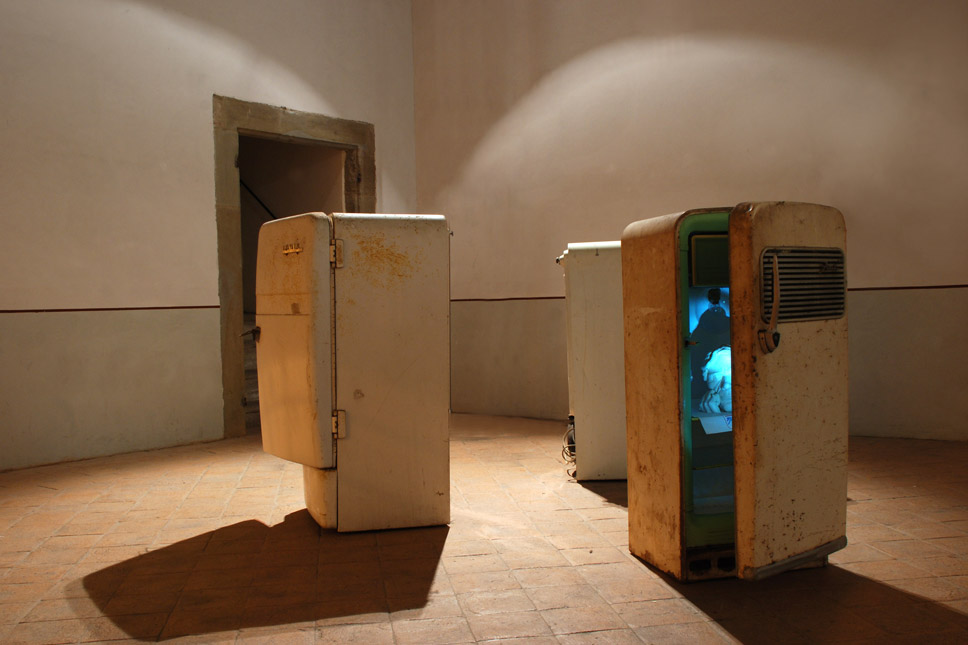 Yes. With great pleasure! At that time I was working on the very piece that I then entered in the Terna competition. It was an installation composed of paraffin radiators which, once lit, would have dissipated their energy in an irreversible way, by providing light. A non-organic performance that is the result of the evocative memory of the light from a candle and the domestic image of the radiator that has allowed man to bring heat into residential areas, to houses, schools, offices……and the inexorable conclusion of the matter that forms the radiator as it melts, leaving space to nothing: entropy.

I have spent lots of time recently researching Pasolini and other 20th century figures such as Enrico Mattei or the lawyer Davanzali… all figures linked to the region where I was born, the Marche region, which was the ultimate economic, social and cultural context in Italy during the years when it was being rebuilt. These figures can be used as litmus paper to indicate the downturn our country has embarked upon over the last few years.

How much time do you spend on pure research? And also, how valuable is it for the artist to dialogue with professionals from other sectors?

I only dedicate time and space to pure research. The ability of subjects, techniques and different professions to interact and undergo osmosis is part of my make-up as a man and as an artist. I use this exchange to purify my research, to avoid falling into predictable aestheticisms and unconscious contaminations. This allows me to analyze the art that I produce and that surrounds me with an analytical eye, to understand its mechanisms, drifts and origins. 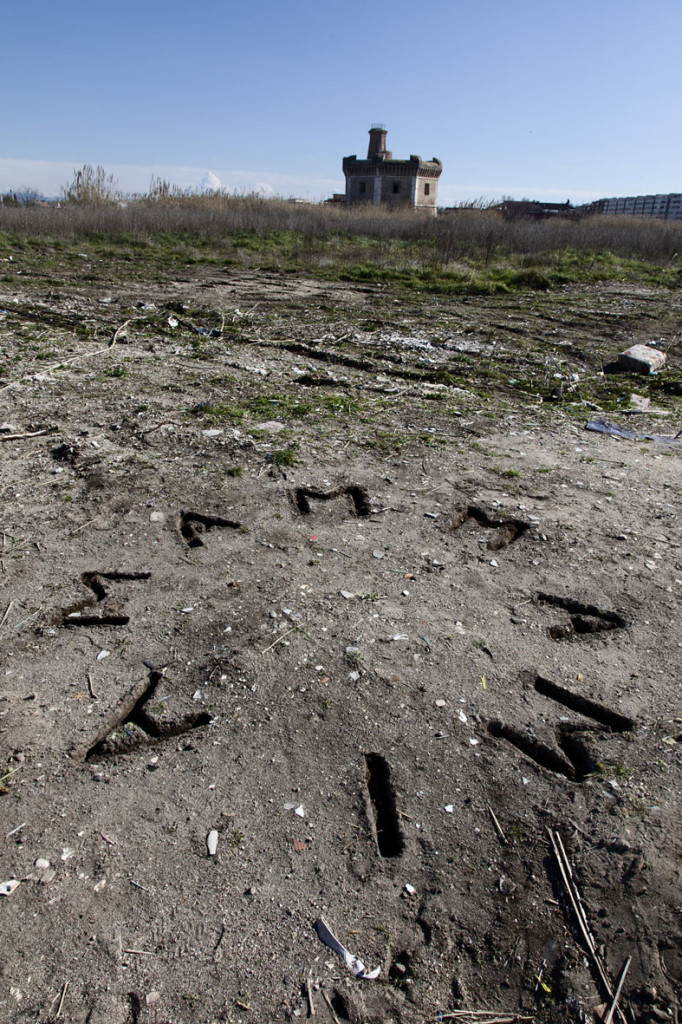 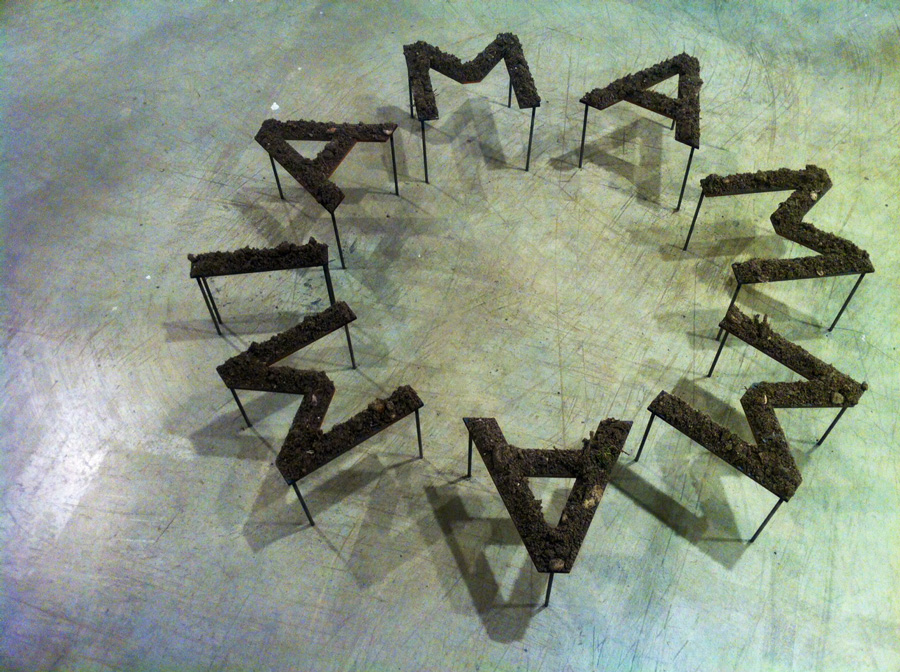 How much does your experience in the world of theatre influence your work?

The theatre was one of my first important experiences in the world of art and this came about as the result of a special project I worked on with Andrea Pazienza. We created the set for a historical Italian theatre company that has now disbanded, «I Sosta Palmizi». I still keep a tight hold on my contacts with this world today, exchanging opinions, drawing inspiration and gaining experience from working with a friend who is like a brother to me, the choreographer Simone Sandroni from the company Déjà Donne.

In Italy, a CLEAR form of support for creativity is completely absent. We lack an economic system in the art sector that allows us to perform research. But I’d like to turn this point around: how many artists exist for the taxman, even if they are famous? How many artists declare what they earn? Do artists form a specific category, given the delicate situation and particular conditions in which they find themselves living? What is missing is a real method of planning how Italian art should develop on a national level. ART is written in capital letters and it is a value that can be spent or invested, just like any other precious material. Let me just say again that Sgarbi, with his widespread biennale, has perhaps shown the state of art in Italy, more effectively than anyone else: an endless mechanism, a type of protagonism built on who one knows, on improvisation and the resources of the individual. So anyone can invite anyone they want. Sgarbi has provocatively brought to light a mechanism that fails to abide by the rules……….a form of anarchy? But I am an irregular, Bakunian artist, who adores the mad gestures of the mathematician Caccioppoli and who lives through this situation with a clear mind and a peaceful heart….  «…nothing is simple, nothing happens without complications and suffering: … what counts most of all is the critical lucidity that destroys words and conventions and delves deeper into things, into their secret, inalienable truth» P.P.P

It is an important award and an opportunity to spotlight one’s work, let’s say that it is probably the most civil art competition that we have at the moment here in Italy. I remember the extremely serious panel at that edition, composed of authoritative, passionate judges who took time to meet with us privately and make important observations about our work during the Award ceremony at the National Gallery. They had truly scrutinized and analyzed our pieces and I left the event feeling flattered. And then there was the week in New York that I spent with a caravan of other winners and journalists, the exhibition in the Chelsea Art Museum, and then the intensity of the press attention we received throughout the experience…..