At Arebyte London, on the 29 of September, a group of established and emerging thinkers will discuss about technology and science fiction while acclaimed collective Fronte Vacuo will present its latest performance ℧R

Arebyte, London non profit visionary space and project dedicated to technology, science and society,  hosts Science Fiction Squared, a one day symposium (September 29, 2022) organised by former New Scientist and Arc editor-in-chief Sumit Paul-Choudhury. Established and emerging science fiction writers and critics will discuss how social and technological trends are likely to change the form and function of science fiction. What new challenges and eternal questions will tomorrow’s SF address? Will it advocate for a better world, or warn against a worse one? Who will create it, and why?

Since its invention, science fiction has taken many forms – from its beginnings in the gothic horror of Frankenstein, through the globe-trotting adventures of Jules Verne, the techno-utopianism of its Golden Age, the trippy fantasies of New Wave and the slick, corporate dystopias of cyberpunk. But what will it evolve into next?

The event culminates with the ground-breaking performance ℧R by acclaimed collective Fronte Vacuo. 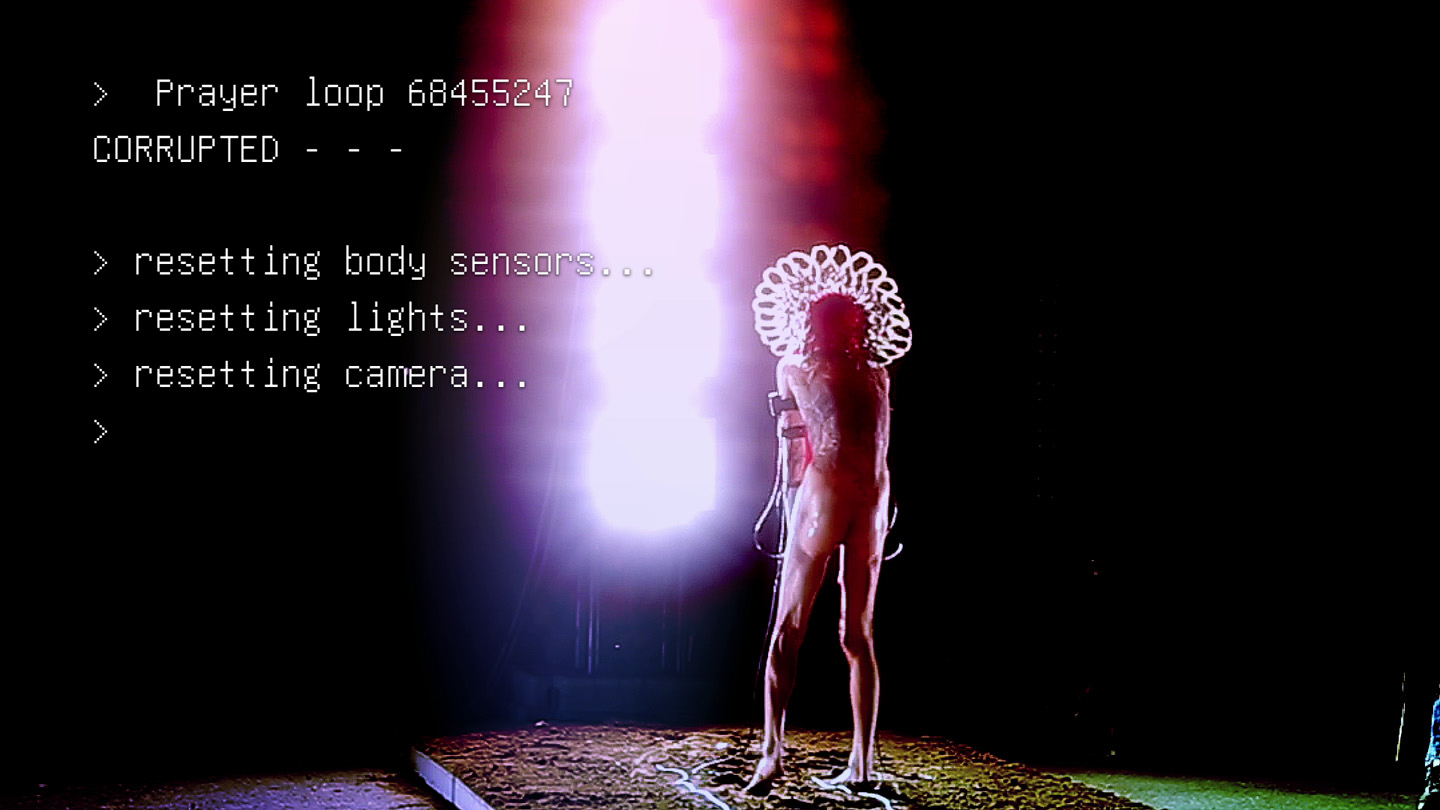 ℧R is a solo performance developed and produced by the Performance-Theatre group Fronte Vacuo (Marco Donnarumma, Margherita Pevere and Andrea Familari), as a new rhizome of their project Humane Methods.

℧R reflects on violence as a foundation of current algorithmic societies: a violence of instructions, of systems, of infrastructures created with the specific purpose of abusing all living beings. Such systems work through loops, organised repetitions. Humans make instructions, machines repeat instructions, living things suffer instructions, on and on and on. The piece takes the loop as a starting point to combine multi-sensorial stimulation with human-computer interaction and somatic practices to test the seeming impossibilities of bodily articulation and repetition. Embodied in Marco Donnarumma’s musical instrument XTH Sense, an interactive, machine learning algorithm transforms the inner sound of muscles, blood, and bones into a real-time choreography of movement, sounds and light. 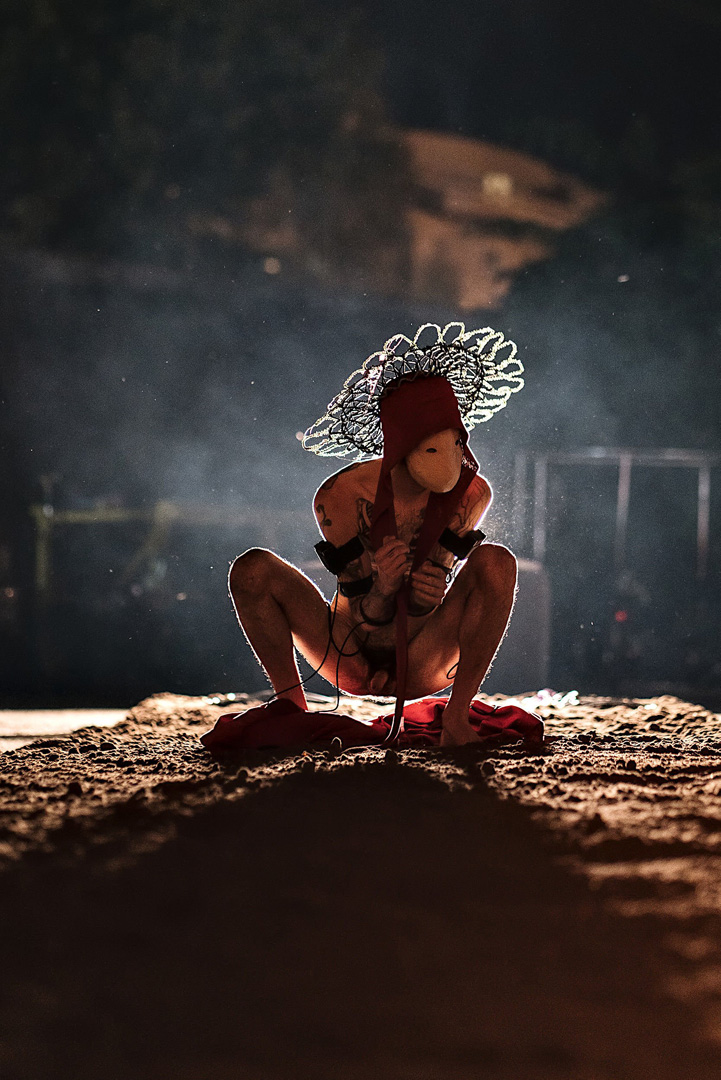 Without a glance, a faceless figure walks and prays, walks and, ecstatic, plunges into the darkness. Her red drape sanctifies her. Her missing face alienates her. The walk is a cycle, a prayer, an assault, an annihilation and a transformation. An AI computer vision system monitors the body, trying to distinguish it from the ‘noise’ around it. The AI wants to represent what it sees, but the system works against itself in a paradoxical loop: the more the algorithm learns to see, the brighter the light becomes. In the eyes of the algorithm, the body is devoured by the storm of light. The flesh of the limbs of the nameless is amplified: microphones on the muscle tissue magnify the internal sonic tumult of the body. The internal tension resonates in the growing brightness. Movement is sound, repeated; sound is vibration, repeated; vibration is pressure, repeated; pressure is released. The howl grows ominously, repetition turns into dysfunction, luminosity into blindness. Will the unnamed reach for the light and burn, just as moths do?

The performance is followed by a conversation between Fronte Vacuo and Nimrod Vardi (creative director of arebyte) explaining the ideas, research and artistic methodology behind the saga Humane Methods (2019-ad infinitum). 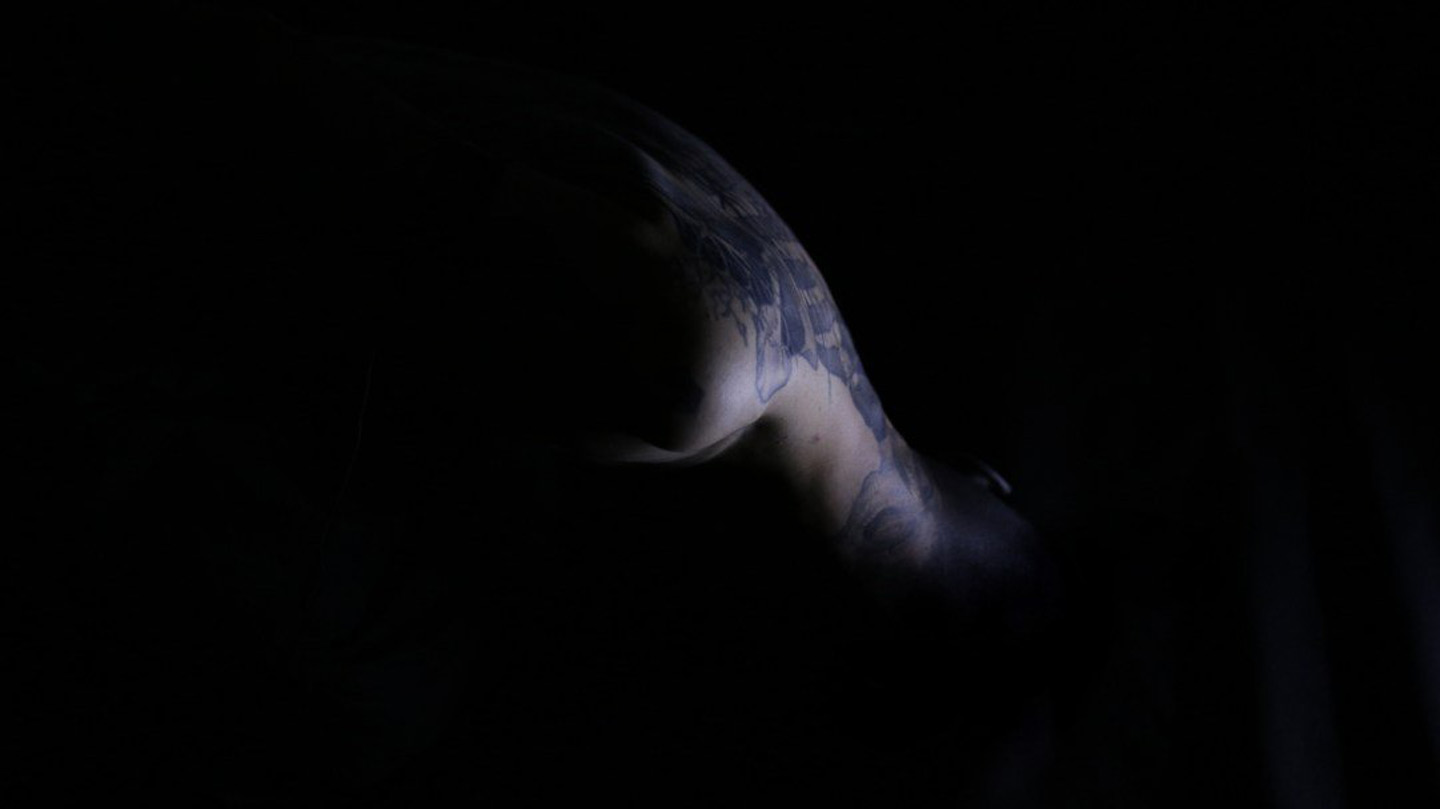 The group’s only project, Humane Methods exemplifies the group’s conception of live art as a social experiment. The saga consists of happenings, living installations and theatre productions in which dance, theatre, bioart, interactive music, living set design and AI technology are integrated into pulsating ecosystems. Each work in the saga acts like a branch of a rhizome: each one dives into different facets of the same theme and world, with an ever-growing cast of human and non-human characters. The works in the series – ΔNFANG (2019), ℧R (2020), ΣXHALE (2021-22) and δISSOLUTION (ongoing) – combine the performing arts with technology and the human with the non-human in different ways to reveal the violence of algorithmic societies through sensory, physical and human strategies. The conversation will be followed by a Show & Tell session in which Front Vacuo will invite visitors to discover the inner workings of the machines used in the performance, interact with <dmb>, the group’s customised computerised artificial intelligence, and talk face-to-face with the artists about the multiple technological, artistic and theoretical levels of the group’s practice.

30’ break with refreshments at arebyte Gallery

FRAME > All the stars we cannot see

Sensoria: The Art and Science of Our Senses

Sensoria: The Art and Science of Our Senses