Smell as a transcendent sense

Smell as a Transcendent Sense stems from the “Eternal Body. Human senses as a laboratory of power, between ecological crises and transhumanism”, project by Elena Abbiatici. This rearch has been organised thanks to the support of the Italian Council (IX edition 2020), an international programme promoting Italian art under the auspices of the Directorate-General for Contemporary Creativity of the Ministry for Cultural Heritage and Activities and for Tourism.

According to researcher R.A. Schwaller de Lubicz, the architectural plan of Luxor – one of Egypt’s largest temple structures, located on the eastern bank of the Nile, in ancient Thebes – is said to be a representation of the human olfactory system, confirming how important smell was for the Egyptians as the point of origin and arrival for human experience[1]. The Egyptians considered men’s noses to be a sanctuary and created recipes, which are still inscribed on sarcophagi today, for the preparation of different essences that would act as a saving viaticum for the afterlife. These mixtures accompanied the dead, also through the practice of mummification using myrrh and incense, to make their entry into the dimension beyond death less burdensome and more solemn.

The contemporary world, on the other hand, by rejecting and ideally removing death, seems to have somehow set aside the most trans-corporeal sense of all, to use an expression found in the work by Prof. Hsuan L. Hsu. In his book The Smell of Risk, Hsu explores the nuances that olfactory, artistic or literary landscapes bring with them – through an invisible intangible medium they manage to reveal our reality’s progressive aseptic, osmophobic, not to say colonialist, becoming. They represent characteristics of the real, filtered through a trans-corporeal sense that is to be re-established and centred through constant daily attention. 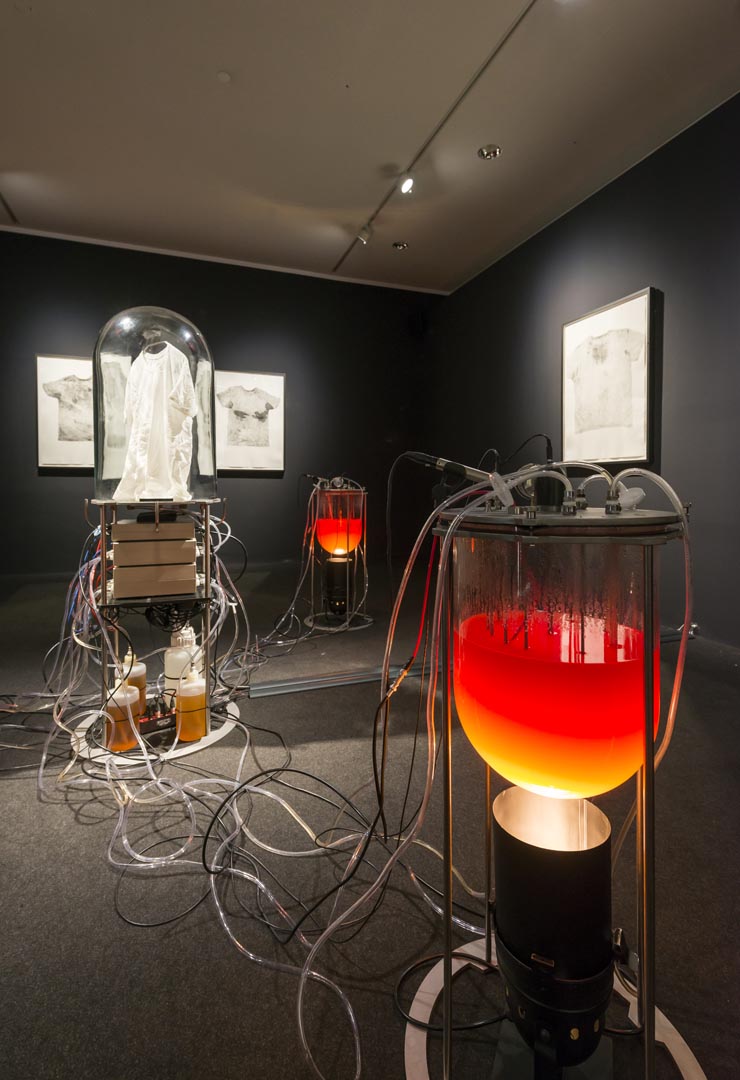 The erasure, rejection and overcoming of certain odours is emblematic of a metropolitan humanity that has replaced them with other smells, proliferating with polluting elements derived from rubbish, car emissions and industrial waste. The VOCs (Volatile Organic Compounds) that we breathe, organic elements carried by wind and dust, are released slowly over time from materials used in architecture and design, such as porcelain stoneware, wooden panels, synthetic fabrics, carpets, detergents, etc[2]. These are tailor-made (polluted) olfactory landscapes, to which the deodorant industry has responded with products that cover up, rather than eliminate, existing odours in domestic and social environments. Air purification treatment has a significant impact on emotional and relational constituents. In 1986, Clino Trini Castelli and Marek Piotrowski recreated a “clean room” by purifying the air in a room as if it were the sanitised environment of an operating theatre, with the visitors’ reaction being one of complete disorientation[3].

Aseptic air represents the extreme final point of a process that began in the 20th century, when the smell of corpses became clinical, meaning disinfected, frozen. And the smell of blood and of rotting, decaying bodies have acquired a distinct distance, especially olfactory, from life event. Death is no longer accompanied as a moment of passage to a new life, but feared, abandoned. This has also been demonstrated by scenes from this last year. Funerals were not held and bodies were destined for a space which was not only physically removed, but also emotionally distant. Funeral rituals are no longer imbued with the olfactory dimension of the Egyptian embalming ritual: corpses are crystallised, put in formaldehyde, taking the ritual to extremes as in Damien Hirst’s imaginary works.

In contrast, Museum of Edible Earth, awarded at Ars Electronica Starts Prize 2021, encourages the experience of geophagy – the practice of eating the earth, an ancient spiritual and sacred practice widespread in Africa, Asia and Latin America. Started as a project in 2017, Museum of Edible Earth[4], in 2020 has catalogued and archived more than 400 types of earth from 34 different countries, with the aim of re-evaluating the sacredness of the element earth, which has been downgraded to a dirty and unsanitary element in the modern era.

While across-the-board deodorization has made many collective spaces aseptic and antibiotic inhibition has bacteriologically impoverished our bodies, microbes today produce a wide range of products, including enzymes, food, drink, raw materials, fuels and pharmaceuticals, even – ironically – producing the smell of sweat as a nostalgic effect of productive activity. This is the work of Paul Vanouse who, in Labor (2019), using bioreactors, recreates the smell of people exercising under stressful conditions, generating a short-circuit between increasingly pervasive forms of microbial production and the progressive disappearance of sweat following increasingly computer-based activities. In the installation, the specific odour is created by bacteria propagating in the three glass bioreactors, each of which incubates a species of human skin bacteria responsible for the primary odour of bodies sweating from exertion, stress and anxiety: Staphylococcus epidermidis, Corynebacterium xerosis and Propionibacterium avidum. The smell spreads throughout the exhibition space and, immersed in this atmosphere, we reflect on the role of microbes in the biological processes of our bodies, in our immune, digestive and emotional systems. The prevailing anthropocentric view has led us to lose sight of the actual nature of the “ecological” relationship between the macroscopic and microscopic living worlds, a relationship of constant cooperation and conflict between human beings and particular species of microorganisms. “The intention of the artwork – states the artist – was also forcing scents that had been despised and both classized and racialized into the realm of high culture, the opposite of western aesthetics of good taste”. 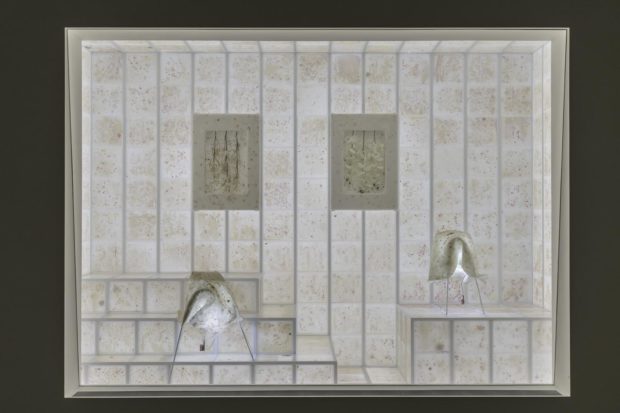 Anicka Yi[5], a Korean-American artist, also creates installations populated by bacteria and germs. These are chosen for their aesthetic beauty and to put coexistence with these organisms, which are natural to life itself but have been wiped out by western capitalist logic, at the centre of the cultural agenda in exchange for fine dust and food that has been genetically modified or grown with the use of pesticides. Anicka Yi uses fragrances, food and fermented bacteria to take art towards a corporeal experience. Her works incorporate microbial samples, germinating bacteria as if they were pictorial matter, to examine what she calls “a biopolitics of the senses”, i.e. the relationship between the perception of odours and issues of gender, race and class. 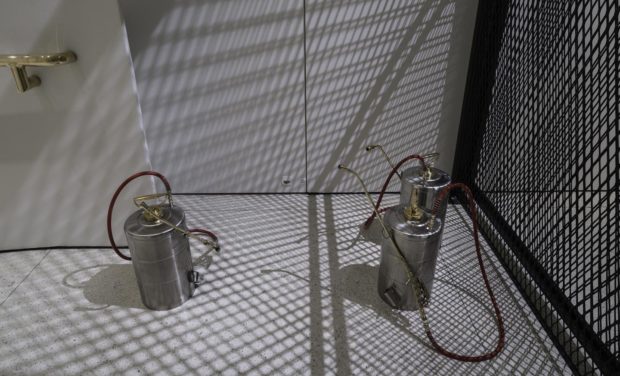 In the installation Life Is Cheap, presented on the occasion of the 2016 Hugo Boss Prize (curated by Katherine Brinson, curator of contemporary art at the Solomon R. Guggenheim Museum, and Susan Thompson, Assistant Curator of the Life is Cheap exhibition), Yi created a setting of two dioramas: on one, strains of bacteria sampled from sites in Manhattan’s Chinatown and Koreatown neighbourhoods grew and multiplied; on the other a colony of ants – insects with a matriarchal social structure closely dependent on the olfactory system as a guide to behaviour – lived and thrived. The ants were exposed to a fragrance called Immigrant Caucus, an hybrid scent of an Asian-American woman (vegetal and floral, with notes of cedar, hay, cumin, and cellophane) and a carpenter ant (citrusy and meaty), combined with a set of scents derived from compounds found in human sweat and ant tissue.

The gallery space was therefore pervaded by a rather unpleasant odour, in order to remove spectators from a comfortable situation that would distract them from thinking about new social models – such as that of the ants – guided by the sense of smell as an essential route of information and marked by an indispensable collaboration.

Salvador Dalì said that, of the five senses, smell is the one that best conveys the idea of immortality, transcending space and time and entering the sphere of the divine. However, smell is currently being weakened by environmental threats, and enormous digitalisation and industrialisation processes which, as we said at the beginning, have reduced its primary function. It’s proved that olfactory sensoriality is diminishing because our survival doesn’t anymore depend on it, moreover it’s demonstrated that high levels of olfactory pollution increase olfactory disorders. Acute and chronic alterations in taste and olfaction are discussed for smog, industrial substances, solvents, herbicides, fungicides, pesticides, disinfectants, germicides, soil fumigants, dyes, pharmaceuticals, textile wastes, smog, tobacco smoke, flavors, plastics, synthetic rubber.[6] Moreover, exposure to air pollution — and particularly to particulate matter (PM) – is strongly associated with higher risk of neurodevelopmental disorders, poor mental health and cognitive defects[7].

For its hand, technology and A.I. have worked to replace potentially very solid genetics. A revolutionary study by a research team at the Italian Institute of Technology (IIT) in collaboration with Harvard University in Boston (USA), in 2020 succeeded in ensuring that an artificial odour was transmitted and perceived directly by the nerve cells of the olfactory bulb, thus managing to understand how the brain processes olfactory stimuli. The team led by Stefano Panzeri, coordinator of the IIT Centre for Neuroscience and Cognitive Science in Rovereto and head of the Neural Computation laboratory, has used machine learning algorithms to develop mathematical models capable of interpreting and translating the language of the nerve cells involved in the perception of odours. This is a decisive discovery because it paves the way for the development of nerve prostheses capable of restoring the functioning of damaged sense organs through artificial interfaces and thus the functioning of damaged parts of our brain[8].

With the likes of Sterlac and Orlan, Neil Harbisson and Moon Ribas, co-founders of the Cyborg Foundation[9], have extended their limited human capabilities through a sensor implant. With a view to trans-originality or trans-sensoriality between living species, Harbisson has acquired the ability to see colours through sounds and Ribas to perceive earth tremors in advance, like animals, claiming the right of cyborgs to movement, identity and citizenship. At the point of digital evolution, Et Atkins’ image of a dystopian future in Safe Conduct (2016), a large three-channel video installation in which artificial organs have been stored as accessories and read by a scanner at the airport, seems to be getting closer. 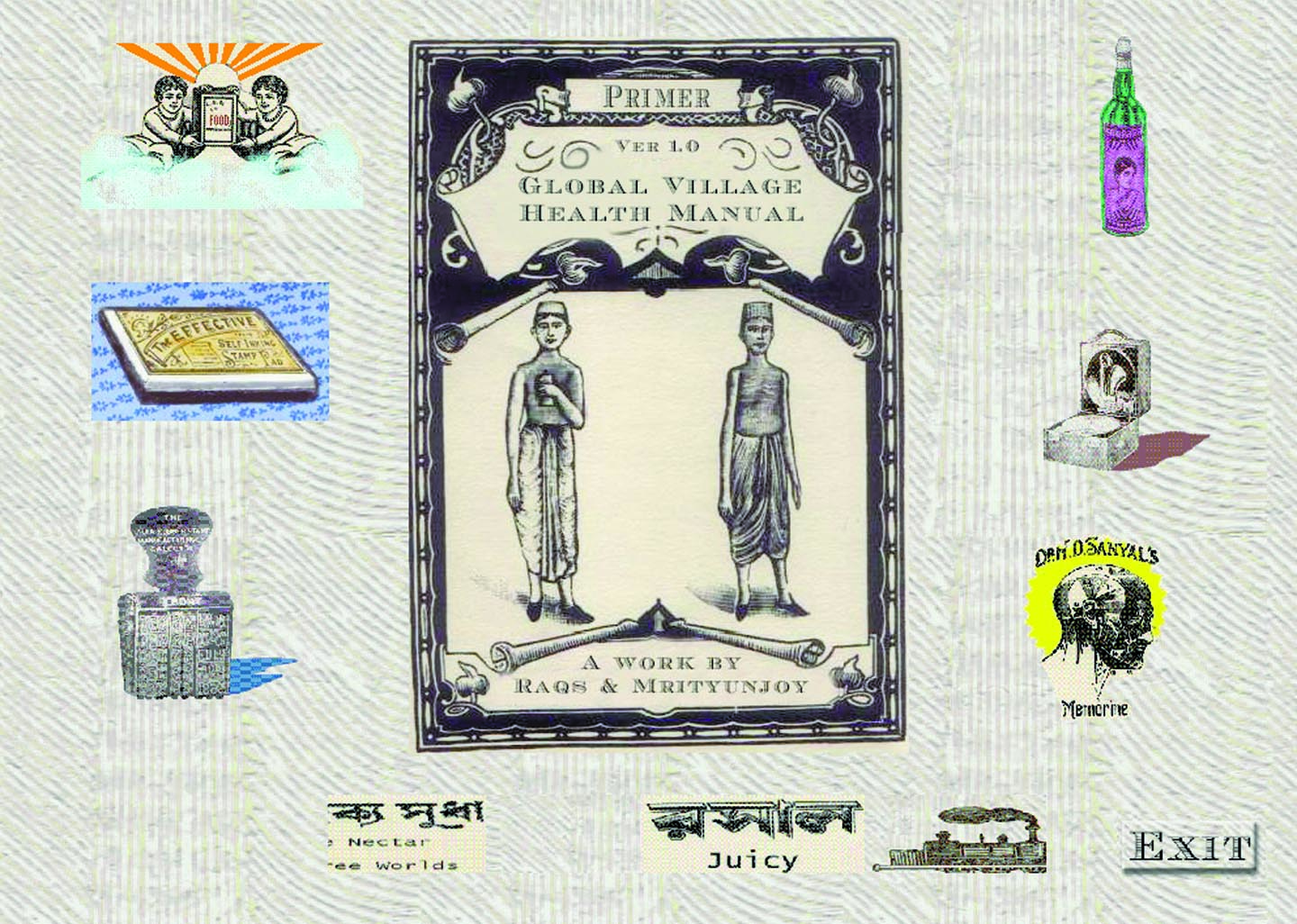 Travelling into the future, back in 2000 the Raqs Media Collective and Mrityunjoy Chatterjee[10] wondered about the outcome of the body’s first forays into virtuality. In the Global Health Village Manual, a printed manual along the lines of the medical manuals of the 19th century, the Collective has assembled all the fragile dystopia to which (perhaps) future bodies could be subjected: cloning, repetitive strain injury, cyborgization, data extraction, virtual prostheses, anthropometry and new methods of torture.

At the end, we could say that in our society we racialize cultural odours, we reject body scents, bacteria and viruses and the smell of death, but we have no problem embracing the odours emitted by consumption and industrial production. In the midst of an advanced process of artificialization of humanity and human senses pollution, we postpone death and seek immortality by entrusting sensor implants, nerve prostheses, bionic organs with the task of restoring or appropriating human vulnerabilities. This makes one think of Italo Calvino’s perfumeries “for the noseless man of the future”.