Stefano Cagol was born in Trento in 1969. He currently lives and works between Trento and Norway. He studied at the Academy of Fine Arts of Brera in Milan and continued his studies with a post-doctorate project in Canada with the Ryerson University in Toronto. His twofold Italian/South Tyrolean origins greatly influence both his field and method of research. Accustomed to life along the border, he explores the ongoing development of physical and mental barriers using his homeland as a starting point, thus his work becomes a means of crossing boundaries and bringing distant realities closer together. «A boundary is a place where ideas are debated, influenced and enriched chiefly due to the distinct morphology of mountains continuously dissected by valleys», stated Cagol. A cosmopolitan artist by choice, reinstating, by means of a creative process, relations between location and history and casting future Countries and cultures while overcoming traditional cultural, spatial and temporal dimensions.

His site-specific installations, public art, performances and videos that disseminate through national and international territories: were on show at the Museum of Modern and Contemporary Art of Trento and Rovereto (MART) , the Museum of Modern and Contemporary Art in Bolzano (Museion), the Zentrum für Kunst und Medientechnologie in Karlsruhe (ZKM), the Priska C. Juschka Fine Art in New York, the Nomas Foundation in Rome and the Platform in London. He participated at the 54th and 55th Venice Art Biennale, at the 4th Berlin Biennale di Berlino (special event), and at the 1st Singapore Biennale (satellite project). He has received many awards including, the VISIT of the RWE Foundation, the Francesco Fabbri prize (special mention), the Martino Martini competition in Mezzolombardo, the A22 (Brennero – Trento Motorway) competition, the Targetti Art Light prize, and the Murri Public Art award in Bologna. He was part of several artist-in-residence programs: the USF in Bergen (Norway) the Drake Arts Center in Kokkola (Finland), the Viafarini in Milan, the BAR International by Pikene på Broen in Kirkenes (Norway), the International Studio and Curatorial Program (ISCP) in New York, the Leube Group’s Art Program in Gartenau and the Künsteraus in Salzburg. He was also awarded a bursary by the International Center of Photography (ICP) in New York. He is currently involved in a six-month transnational project supported by the RWE Foundation (Germany) in the frame of its VISIT program 2014.

Dissolving light, winning the Terna Prize 02 in the Megawatt category, is a light box that provides the image of the luminous installation created for the Parallel Event for Manifesta 7 in Trento, i.e. a potent 15km beam of horizontal light launched into the sky over the city of Trento «a perfect metaphor of boundaries to overcome: boundaries between different cultures, opinions, historical periods and separating man from nature and past from innovation».

What is the artistic situation in Italy today? What role is played by an artist within the current art system and society?

Italy does not fully believe in the potential of its artists. Our production lacks support and our work is not sufficiently promoted on an international level, this negatively impacts our image on a global level. Furthermore, this is a period in which our Institutions are in great need of funds. As a result of the current crisis, our politicians continue to reduce funds made available to culture, this is a big mistake since we are all aware of the fact that culture, and especially in Italy, is a unrenounceable resource. Contemporary art however is currently more widely accepted and has reached a mature stage. It has even become trendy. Many young people are fascinated by this form of art and decide to engage in it. Actually there is a training process that is quite standardized and requests to move to foreign universities as a way to success. However it is no easy. A new phenomenon is occurring: art curators are on the rise and have almost matched the number of artists.

The Terna Prize issued, within one of its first editions, a foresight research on the condition of art for 2010-2015. The results shined a light on the current scenario. The results also indicated that the crisis would weaken any remaining dependency on dominant rules and ensure greater social commitment in terms of art. Do you believe this is actually happening?

I think this forecast is quite right. Some fields of art are heading in this direction. I am a strong believer of a more concrete art chiefly focusing on content and the overall message. In this way, art achieves a significant, real, communicative, symbolic and political role: as I often say, art is communication, but this does not mean aesthetics can ever be neglected. 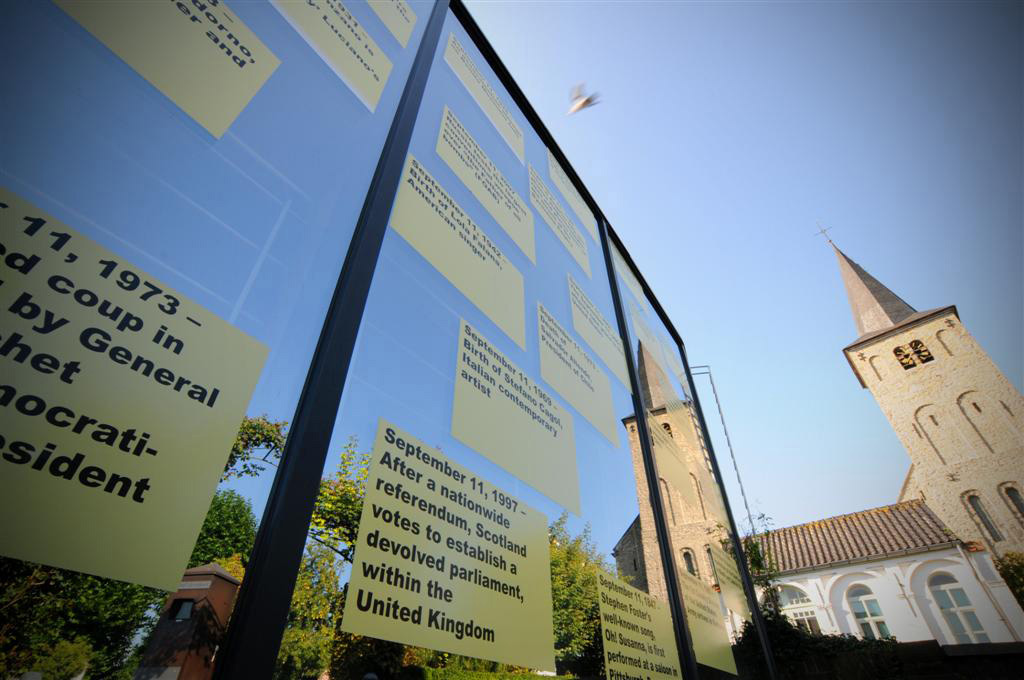 During that period I was living and had an art studio in Brussels. The studio was a beautiful garage we inhabited in Hadelskaai, minutes away from Sainte Catherine. I was in the studio when I received the phone call announcing the award. It was a wonderful moment, I love remembering it.

Whether to take part was a simple decision for me. I have often used energy as a means for my work. I had just finished an important installation for the Manifesta 7 opening week, by tracing a beam of light (several kms long) in the sky of my hometown, Trento that as it progressed it dissolved and disgregated boundaries: Light dissolution (of the border). I received the Terna Prize and residence at the ISCP in New York City with a picture of this work. 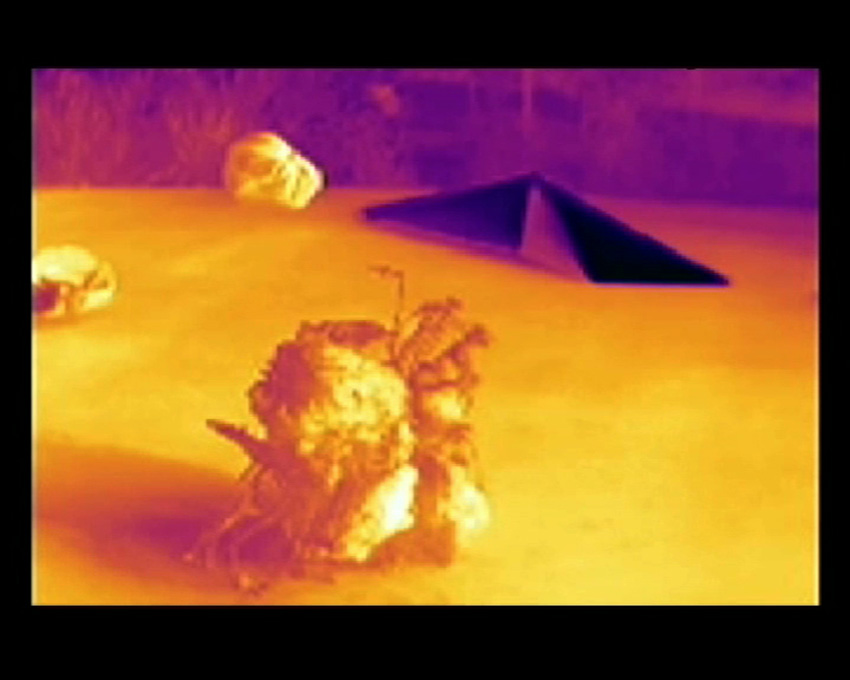 As part of the project you are currently involved in as an artist in residence of the RWE, what kind of involvement do you expect from museums and how will you achieve the flexibility you require from them?

I hope for an open mind, immediateness, simplicity … I believe the involvement of several institutions is aided by the financial support this project receives from the RWE Foundation, thus in order to take part the main requirement is enthusiasm! This nomadic project is an interesting challenge, but also represents a procedure I have already used in the past for projects such as Bird Flu Vogelgrippe (2006) and 11 settembre (2009). It is amazing when we are able to overcome the strict reasoning behind institutional schedules. In fact, I am currently writing from a Hotel in Hamburg. On route to Bergen, Norway, where in two days I will reach the Landmak /Bergen Kunsthall that hosts the first event of the project with the RWE Foundation: The Body of Energy, strictly in progress. 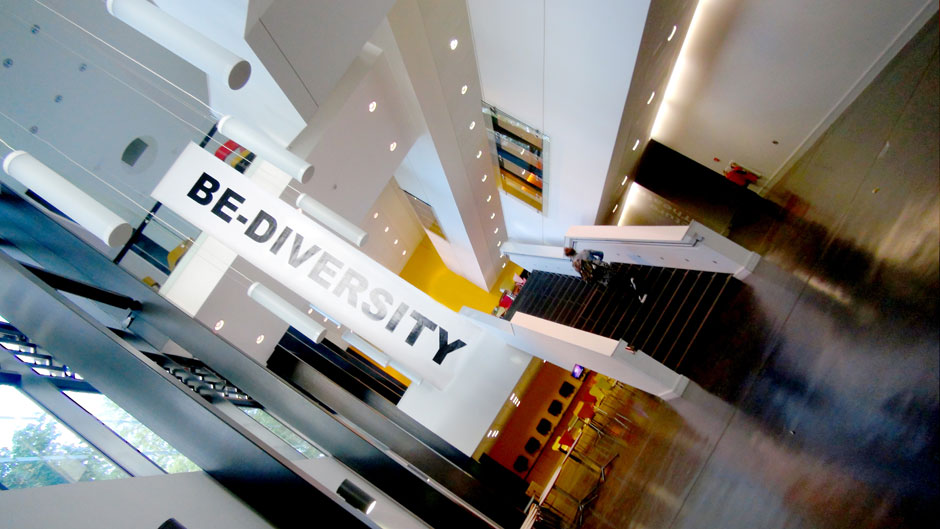 Could you tell us a bit about the «BE-DIVERSITY» concept and how you came up with the idea?

BE-DIVERSITY was initially developed during a symposium I took part in last May: «Critical Ways of Seeing» at Goldsmiths University, London. It is based on the creation of a neologism, in fact be-diversity echoes biodiversity announces: «new ways of existing and sharing existence: demanding and protecting individuality from standardization…». The project featured an event / action, caught on video, that baptized the birth of this new word: a «flag» in capital letters was unfurled and was kept on display for over a month in the University’s New Academic Building (NAB).

The birth of this word coincided with the development of a platform for discussion. For this occasion I repeated a method I had developed for the project on climate change, namely The Ice Monolith, for the Maldives National Pavilion during the last Venice Biennale. In London students, curators, intellectuals were asked three metaphorical questions concerning common dilemmas: three FAQs [Frequent Asked Questions] hugely popular on Google’s global platform. Their answers now set the coordinates of a digital map. 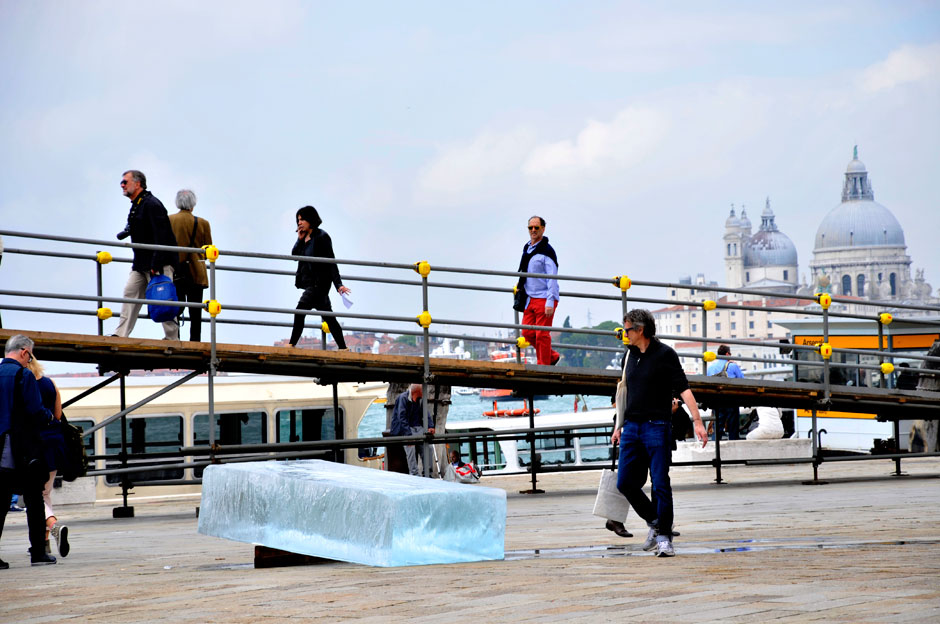 You research projects often involve temporary means. What is your view on conservation? In this regard [but also with reference to the presentation and appreciation of temporary works of art], what do you think we could learn from the museums you have worked with several times such as the ZKM in Karlsruhe?

Generally speaking a temporary work of art leaves a conceptual trace behind living in the memories and the eyes of those who have witnessed it. However, with my procedure, the work of art is transferred onto a photograph or a video. This occurred in the disappearing of the block of ice of The Ice Monolith during the Biennial in Venice, or in the ray of reiterated light as part of The End of the Border for the Barents Art Triennial.

Conversely, 11 settembre is a work consisting of several important dates… This unwinds, is transferred and lives on several means: LED journals (previously on display and currently part of the Mart, Kustraum Innsbruck and ZKM collections), videos (such as the one at the Other Gallery in Shanghai), large prints (such as the one presented for the open studio of my studio at the Officina in Lambrate, Milan), or large post-it notes (installed on the glass walls of the PAM for Ename Actueel in Belgium). This is a truly conceptual work, but it becomes mutable and, according to the event, site specific.

In addition to my ephemerals, I have developed many permanent installations, in marble or steel, sometimes monumental, precisely to reiterate that my work knows no boundaries (among others, the giant marble chessboard in Bolzano, and the Novus Atlas, a giant steel structure relating to/contrasting with an original 1500 Map and Tridentum, three large steel pyramids, a metaphor of the Roman origin behind the name of the city of Trento). 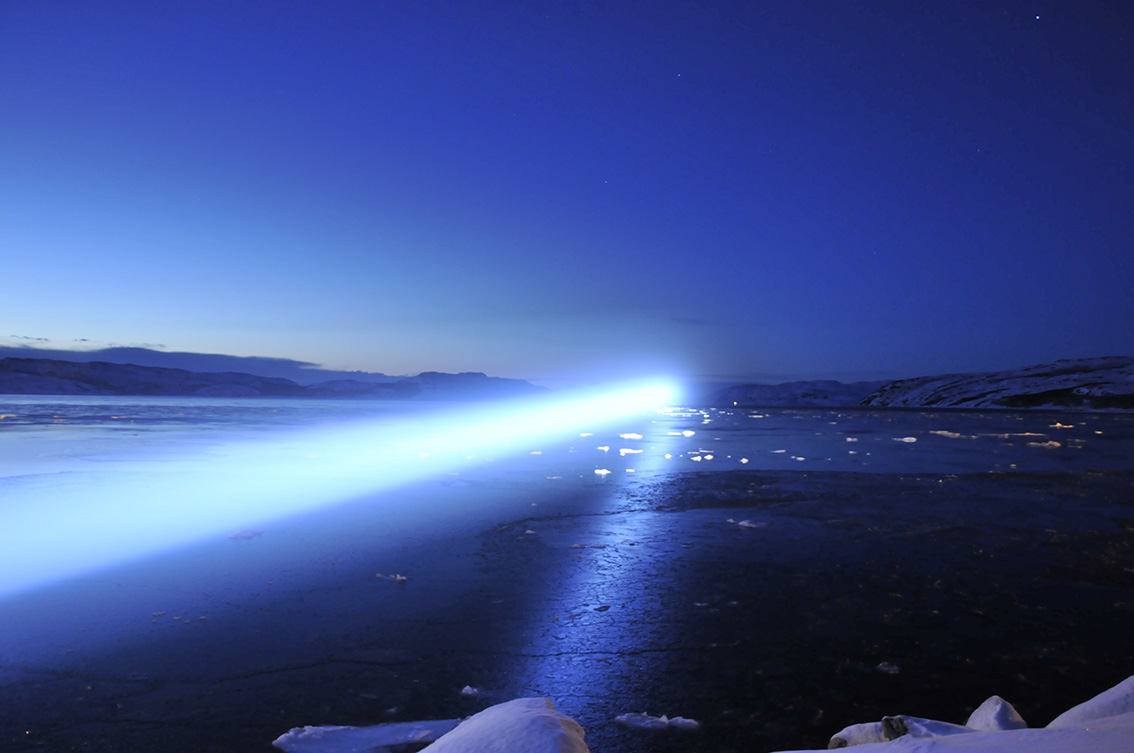 What should Italy have (that it does not already have) to encourage creativity and make our country even more competitive at international level? Which country do you believe achieves this best?

I have had the privilege of working with many Italian Institutes of Culture. In Oslo, Toronto, London, Amsterdam, Tokyo and Singapore. Potentially an exceptional network. The problem is that initiatives such as these are chiefly due to initiatives by individuals. Thus, we appear to be lacking any form of endorsement of our noteworthy artists abroad, as opposed to the models suggested by the Goethe Institute or the British Council.

To name a successful model I would indicate Belgium that invests, believes and endorses (especially in the Flanders) with significant enthusiasm its own expressions of contemporary art, achieving remarkable results on an international level. They proudly nurse their own artistic heritage strongly believing that they are currently holders of great art. A Flemish art with ancient roots, but steadily consolidated in the present and strong ideas for the future. What about the Italians? 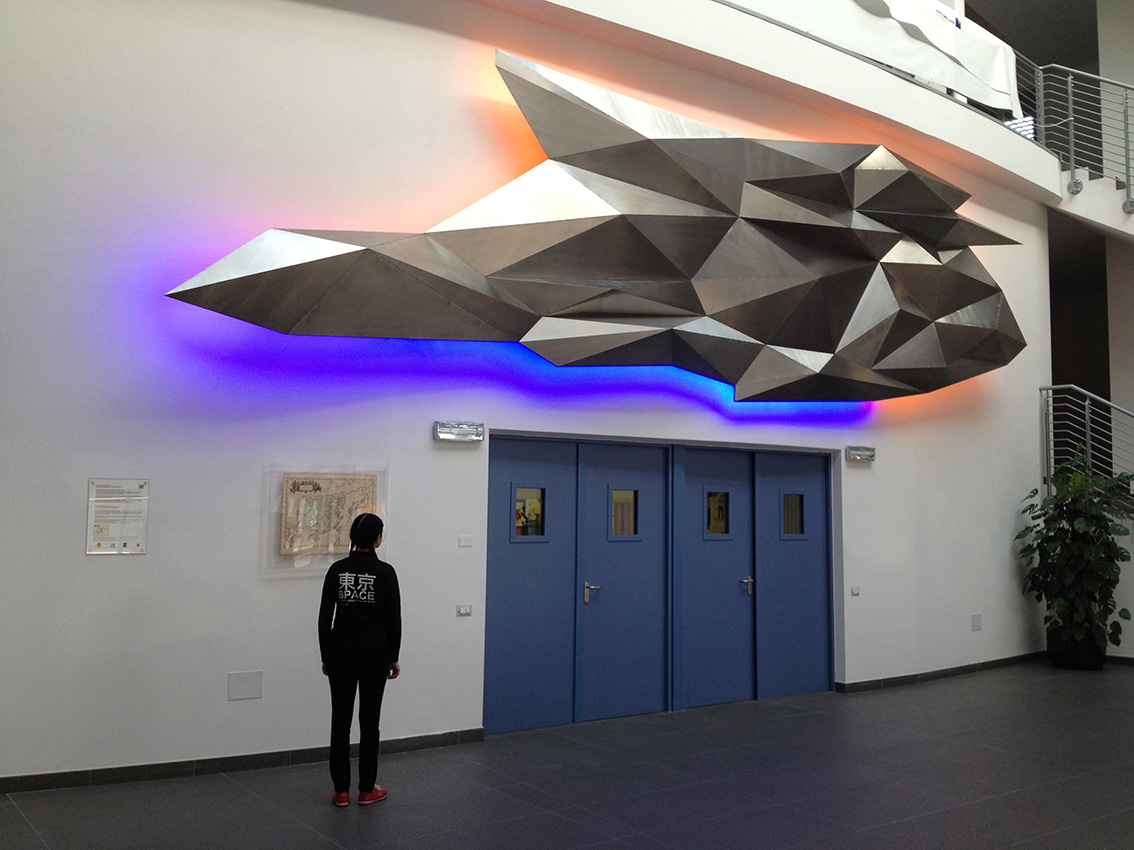 An opportunity to receive support for projects developed abroad such as our presence at the ISCP – International studio & curatorial program in New York and to travel to and be on display at the Expo of the SUPEC – Urban Planning Exhibition Center in Shanghai were certainly an important moment of development and acknowledgement.

Terna is a company that provides energy to our Country. Its commitment to the Terna Prize focuses on transmitting energy to art and culture and creating a network for supporting and developing talent. Do you think that the Terna Prize formula is still relevant for promoting art? Do you have any suggestions for the next edition?

To persevere with continuity, leverage, determination and freedom as has been the case to this very date. A future pavilion including all Terna Prize winners at the Biennale in Venice could be a very interesting opportunity indeed …