Pt. II: In the Head of a Plankton

Noise pollution produced by shipping, sonar employed by military vessels and airguns used for oil exploration are causing devastating effects on the marine ecosystem. There are many studies on the subject but it is difficult, even in the face of numerous proposals for bans on mining activities or changes in shipping routes to avoid protected marine areas, to stem the propagation of sound waves at sea. The issue is becoming increasingly problematic, as the frequent images of beached whales testify.[6]

Several artists have developed projects starting from the problem of underwater pollution and then developing it further. We are going to present the research by Francesca Thyssen Bornemisza, artist and founder of the foundation Thyssen-Bornemisza Art Contemporary (TBA21), Robertina Sebjanic, Slovenian artist and researcher, and Victoria Vesna, media artist, professor at UCLA Department of Design|Media Arts,  founder and director of the UCLA Art Sci center’.

Francesca Thyssen Bornemisza’s performance consists of a lecture that sounds like a strong denunciation against the backdrop of an increasingly insistent beat, becoming louder and louder. The project features a collaboration with the Acoustic Ecology Laboratory of the Scripps Institution of Oceanography, the award-winning NRDC documentary Sonic Sea, TBA21-Academy expeditions and the sound artist Jana Winderen. Sounds too Many is the name of Francesca Thyssen-Bornemisza’s lecture-performance, realized through sophisticated audio engineering techniques to produce an overwhelming, immersive experience. Never-before-heard sounds were spatialized by the sound designers of Ears Up Sound Design Studio in Burbank, California, in collaboration with Meyer Sound Laboratories and diffused at Ocean Space in Venice, home of TBA21 at the Church of San Lorenzo, where, it is said, Marco Polo is buried. For the occasion, Ocean Space becomes the set of a performance taking place daily in the waters of the lagoon and allows the artist to problematize the consequences of mass tourism on the biodiversity of many port cities.

Noise Aquarium, on the other hand, places the viewers in a large aquarium populated by giant plankton the size of whales and simulates the acoustic sensations produced by anthropogenic pollution. These microcosms are severely affected by our waste and noise pollution, mainly caused by consumerism. A 2017 study by McCauley et al. published in Nature Ecology & Evolution claims that the airgun technique causes a significant decrease, including an increased mortality, in the abundance of zooplankton organisms in a 1.2 km radius of the sound source.[7]

Victoria Vesna, an artist and professor at UCLA, together with the team working with Alfred Vendl, director of the Scientific Visualization Lab at the University of Applied Arts Vienna, developed Noise Aquarium, which has been presented at a number of locations around the world. At Ars Electronica Festival 2018, Deep Space 8K was transformed for the occasion into a fully immersive plankton aquarium. (This work will be shown again at the Pratt Manhattan gallery in NY in November 2021 and will be part of a major traveling exhibition at the Barbican centre in London).

The extraordinary quality of this simulation arises from the work of a team composed of biologists, chemists, nano-toxicologists and an animator, which managed to transcend the ecological theme translating it into aesthetic forms. This helps to reposition the importance of microorganisms on marine and terrestrial ecosystems, by enlarging the size of plankton and highlighting the anthropogenic source of noise. The 3D scans of plankton were obtained by zoologist Thomas Schwaha and biologist Stephan Handschuh using unique scientific imaging techniques. These scans were then passed on to Martina Froeschl, who specializes in computer animated scientific visualizations of tomographically scanned microscopic organic entities at Vendl’s Scientific Visualization Lab.

Noise Aquarium is designed to be viewed through linear video, augmented reality (AR) and virtual reality (VR) for an immersive experience able to boost an awareness of the damage we inflict on microorganisms which are invisible, but which our life depends on. In fact, plankton is one of the primary bases of the marine food chain and a crucial component of the Earth’s ecosystem as it contributes from 50% to 85% of the oxygen in the Earth’s atmosphere.

As a result of the urgency of this issue, the artist created an online meditation version during the pandemic. It was first performed for the Laznia center in Poland, where the Noise Aquarium exhibition was hosted with the sound artist Anna Nacher joining, after which it was hosted by the Heong gallery at the University of Cambridge, for the benefit of those suffering from the virus in South Asia. These striking images are accompanied by immersive binaural sound which encourages the audience to meditate on these micro-organisms.

Jellyfish, in contrast, are the subject of Aurelia 1+Hz/proto viva sonification, an audio video performance by Robertina Sebjanic, a Slovenian artist who was awarded an honorary mention for Interactive Art at Prix Ars Electronica in 2016. Robertina Sebjanic’s work revolves around the biological, chemical, political and cultural realities of aquatic environments and explores the impact of humanity on other species and the rights of non-human entities. Aurelia Aurita is the name of the jellyfish featured in the performance: it has rudimentary sensory nerves at the base of its tentacles allowing it to sense light and smell, as well as orientate itself. The artist’s interest in this jellyfish stems from the observation that it is one of the most adaptable species in the Anthropocene, able to withstand significant noise pollution and return to a polyp state if threatened by the environment. The artist’s aim was to try to understand Aurelia Aurita’s biological intercommunication in relation to the sonification of the environment and underwater bioacoustics, still unknown to date. The audiovisual performance combined pre-recorded sound loops of jellyfish sound experiments in an enclosed environment with the sound generated live by Aurelia Aurita using a localization system. The resulting acoustic and visual experience echoed the sonic fascination of jellyfish movements, contractions and interactions which, taken together, reveal the value of bioacoustics in studying how the natural world communicates and in establishing a new interspecies coexistence. The performance Aurelia 1+Hz proto viva sonification was accompanied by the interactive installation Aurelia 1+Hz/proto viva generator that questioned the properties of jellyfish tissue for possible application in regenerative medicine, imagining the development of a new biocybernetic organism, between robot and jellyfish. Can we aspire to the homeostatic resources of jellyfish? In the future will we be able to imagine taking on the characteristics of certain living organisms, crossing the sound barrier or regenerating their tissue like their senses? Mermaids, half human and half fish, are mythological creatures whose song, not by chance, made Ulysses fall into a state of despair and whose name has ended up representing danger.

Finally, in aqua_forensic, a work developed during a residency funded by the European Media Art Platform – Creative Europe Programme, Robertina Šebjanič and Gjino Šutić explore how water is affected by human pollution generated by chemicals and pharmaceuticals.The study was conducted in Linz along the Danube and in the Adriatic Sea in Dubrovnik. In both cases the objective was the search for, collection and analysis of samples containing polluting molecules, especially pharmaceutical residues, such as antibiotics, antifungal medicine, painkillers, hormone pills and psychotropic drugs. 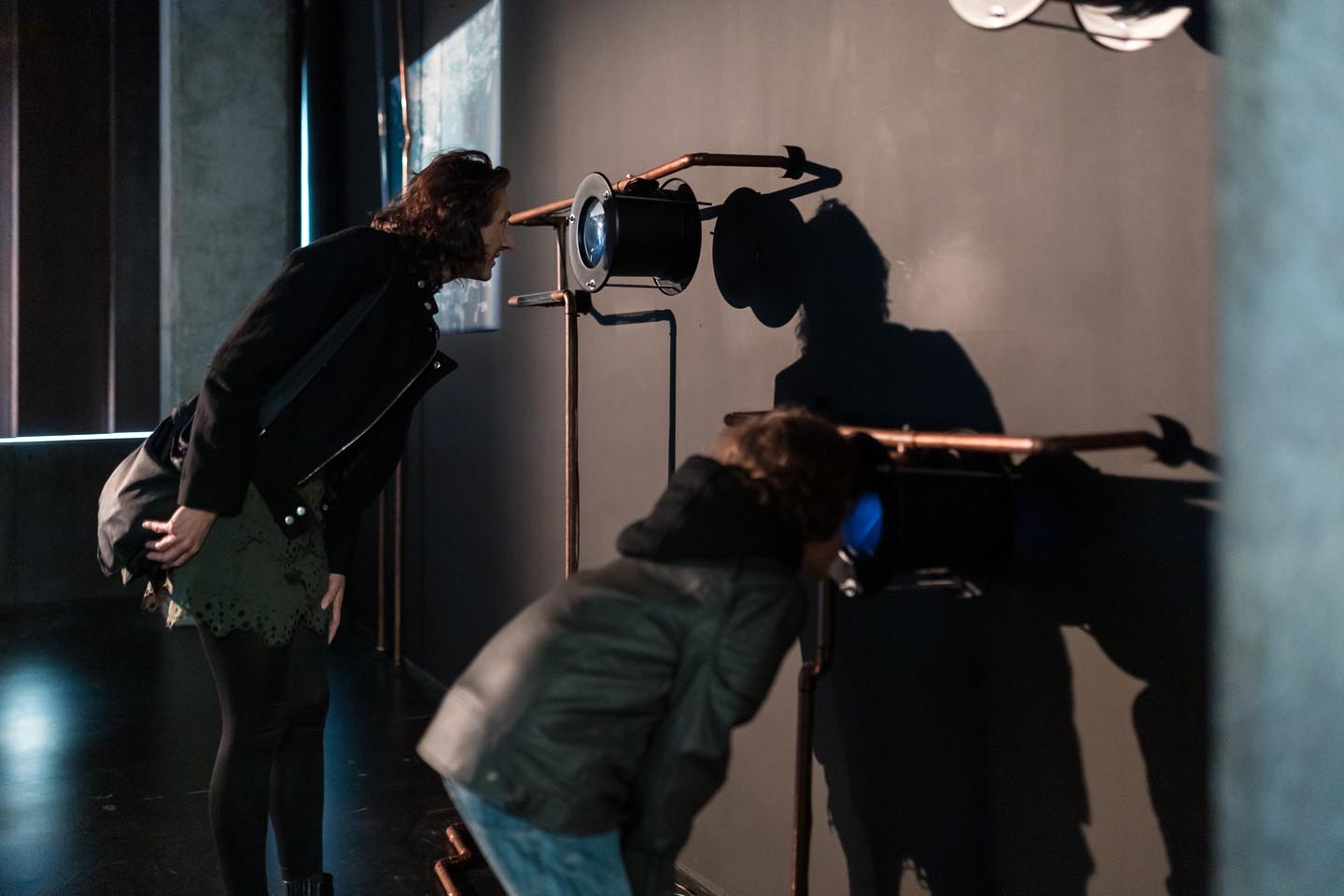 Designed to generate a forensic space, characterised by openness and dialogue and with a role for active citizenship, the project included a workshop at Ars Electronica which was transformed into an installation highlighting how the fate of the sea environment and the species is entwined. The installation included a tubular structure punctuated with holographic videos of dead microorganisms in a drug solution 20,000 times weaker than an average human dose. 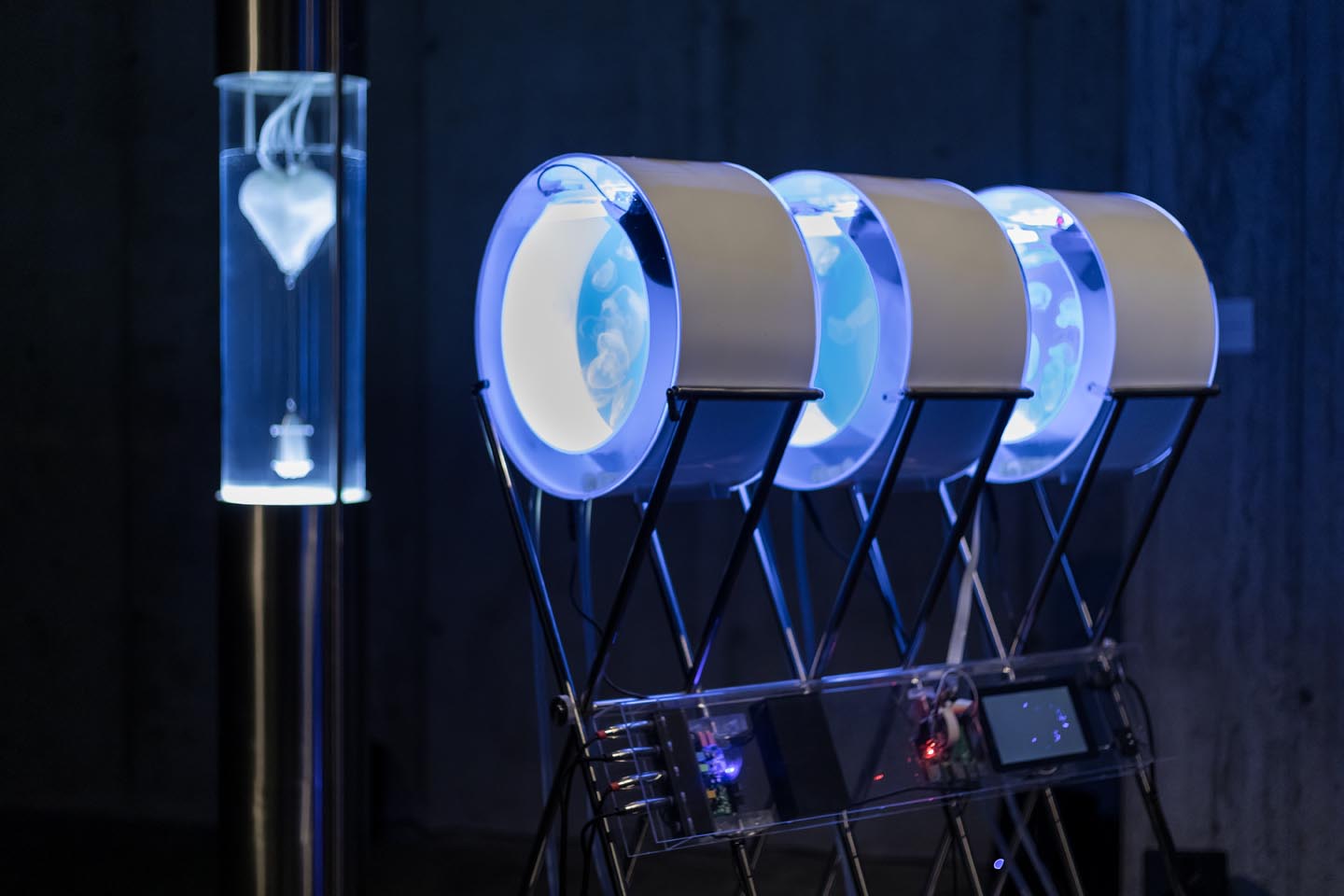 The challenge of these works is to get to know an underwater sound environment, to understand the impact that our technologies have on the marine habitat and the benefits that, as land mammals, we can identify through medical biotechnology, strengthening specific features of resistance and transformation. Can we take them on board?

The political component of noise in the artistic practices of the last century is part of “Eternal Body. Human senses as a laboratory of power, between ecological crises and transhumanism”, curated by Elena Abbiatici. This rearch has been organised thanks to the support of the Italian Council (IX edition 2020), an international programme promoting Italian art under the auspices of the Directorate-General for Contemporary Creativity of the Ministry for Cultural Heritage and Activities and for Tourism.

E.G. Abbiatici, The political component of noise in the artistic practices of the last century, Pt. I, 14.10.2021