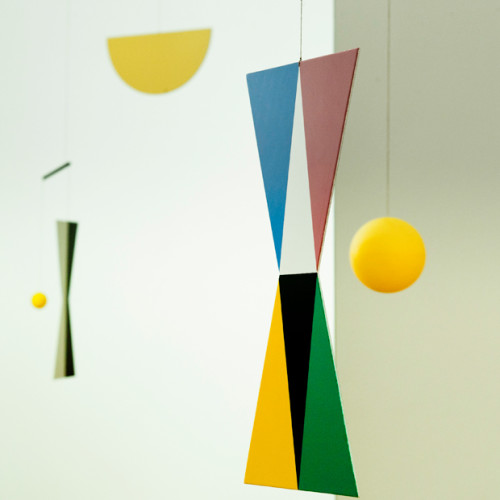 We have discussed in detail the aerial characteristics, the lightness as well as the lack of pattern and predictability of the Useless Machines. We have insisted upon the aspects of installation and spectacularity due to the use of light and shadow. We have placed emphasis on the constant development in space of a shape and the modification over time of a structure that is neither sculpture nor painting. We have pointed out the kinetic traits, the harmonious relationships between shapes and measurements resulting from programming, the characteristics of serial production for aesthetic purposes. We have also highlighted the real motion of the machine’s elements that shifts at the slightest change in the environment. An example of this are air currents. We have not, however, dedicated much time to virtual motion as a purely perceptive fact – revealed at the very moment that the spectator moves. In fact, the Useless Machines possess the dual characteristic of motion: real (the colourful elements of the «pictorial» composition) and apparent (since the form changes in function of how the spectator moves).

Munari himself reminds us of this programming and aesthetic aspect: «I cut out these shapes […] and I painted the other side (the one that is never seen in paintings) in a different way so that they present a variety of combinations when rotating in the air».[1] The elements are painted on both sides and have their «Side B» which is as important as and pictorially equivalent to «Side A» in such a way as to make the traditional dualism between figure and bottom perceptually unstable. In the photograph we can see that the colour schemes are not repeated on both sides of each element, partially responsible for the variation and perceptive instability of the composition on a whole. All of these conditions contribute to the creation of an idea of apparent motion determined by the relationship between mobile and the eye of the spectator.

In 1937, Munari published an article entitled Che cosa sono le macchine inutili e perché [2] (What are Useless Machines and why?) in «Corriere della Sera»’s illustrated newspaper supplement «La Lettura». The artist provides a detailed and particular explanation of his works in this informative essay: the singularity of the description is found in the fact that he equated his creations, historically positioned to the origins of kinetic art, to natural phenomena.

Munari represents his creations as such: «Objects to be observed as one would observe a mobile complex of clouds.» He then comments that the Useless Machines «find their engine in natural phenomena such as a change in airflow, temperature changes, humidity, light and shadow etc., taking on the aspect of a life of their own that can be compared to the motion of grass in a field, the transformation of the clouds or the way a stone spins around in a stream.»

This is how a possible and alternative interpretation of these works lead us to finding a certain naturalness in them which, in a specific case, means observing the laws of nature and the developmental process of dynamic form. Munari uses the lessons learned from the observation of natural phenomena and tries to transfer them into the context of artistic visual communication. 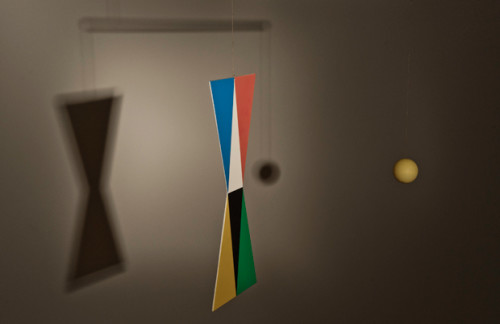 He would re-introduce the parallel between certain observable phenomena in nature and his mobiles towards the end of the 1970s, comparing the birth of the Useless Machines to children’s games like those of scattering bits and pieces of paper from the ceiling.[3] The observation of motion produced by the various shapes of the papers as they flutter to the ground determines the visualization of how the air moves about, an action that would be formalized in a performance given in Como in 1969 entitled Revealing the air at the group exhibition «Campo Urbano. Interventi estetici nella dimensione collettiva urbana /Urban Field. Aesthetic interventions in the collective urban dimension.»[4]

The theme of the large machine fascinated Munari very much whose futuristic training always carried a substantial weight in his works. It is the protagonist of a story in the book of reflections upon the use of photography, published in 1944 with the title Fotocronache. Dall’isola dei tartufi al qui pro quo (Photo-Reportage).[5] 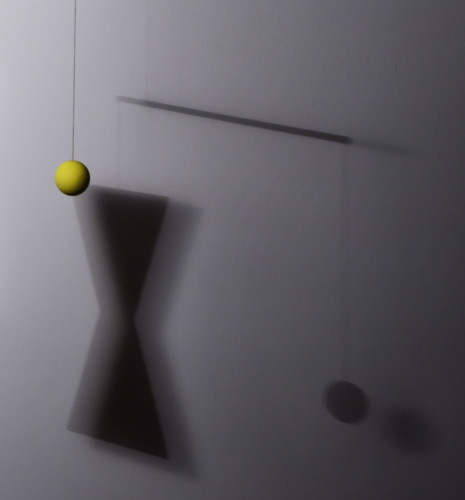 «Once all painted, I use rust with squirts of water all over and stones. What a machine, kids! What I went to see over these past few days (I often visit the dredges), is an authentic floating monument.» Actually, for the artist the idea of the Useless Machines was a result of his observations of natural phenomena such as the waterworks generated by old mills with their large wheel paddles along the shores of the Adige River, a river that crosses the flatlands south-west of the lagoon in Venice where Munari grew up, or the observation of air as a means and physical force to exploit along with the concept of levers or elastic energy. Air currents, moistures and light are all natural elements that contribute to the Machine’s behaviour.

With the exhibition «Bruno Munari Politecnico», The City of Milan and the Museum of the XXth century are dedicating, starting from April 5, 2014, a retrospective to this visionary and versatile artist. Starting from the analysis of his series of Macchine Inutili/Useless Machines Luca Zaffarano reconstructs a full portrait of  Bruno Munari (1907-1998) that Arshake will be publishing on a weekly basis. The Useless Machines reconnect with the many aspects of the artist, illustrated by unpublished photographs by Pierangelo Parimbelli.

Mario Sasso. Art, technology and hypothesis for a laboratory