ZKM is a German institution which is acknowledged throughout the world as the museum of the future. It is particularly focused upon experimentation with new technology and notably inclined to an experimental and interdisciplinary approach.

«Mapping Spaces», curated by Prof. Dr. Ulrike Gehring, is being inaugurated this week in the futuristic spaces in Karlsruhe. This exhibition presents the theme of contemporary landscape with a completely revolutionary interpretation of the landscape genre. To better understand it, one must go back in time to the 17th century – the Golden Age of great painters and also of great technical discovery. The genesis of the landscape genre is linked here to science, to the progress of manufacturing and to military engineering – singled out as the true elements of connection between maps and image. 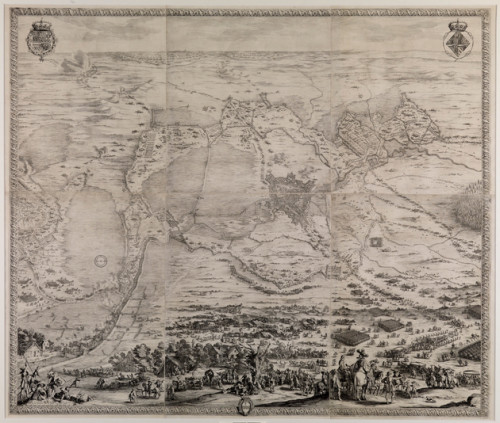 Over 200 works on display include surveying instruments, globes, books, maps and paintings on loan from some of the world’s most prestigious museums: the Rijksmuseum (Amsterdam), the Prado (Madrid) and the Louvre (Paris). The exhibit reconstructs the influence that the first geographical and scientific guide books for constructing fortifications had on landscape artists. Most importantly, they reveal an interdisciplinary approach which was already well-established at the time. Examples of this are the exchanges among mathematicians, experts in geodetics, instrument manufacturers and painters. It is here that the true antecedents are found of new systems of landscape mapping with the use of today’s sophisticated technology.

The foreword to the project, developed at the University of Trier, is Pieter Snayers’ large-format depiction of historical battle scenes: maps and landscape paintings are projected over one another to document the most recent developments in modern engineering, ballistics and fortification construction. A press release for the exhibit states that «Artists had designed modern surveying systems long before new media drew on images from outer space.» Yet again, a museum of the future shows us how important it is to understand the continuity with the past when modernity was simply shifted to other parameters which were equally cutting-edge for their time. ZKM director Peter Weibel believes that «the relationship between science, technology, and art – the signature of ZKM – has been in existence for centuries. The 17th century art of painting is similarly indebted to contemporary media technology.»