Fabrizio Bellomo. They Are Just Numbers 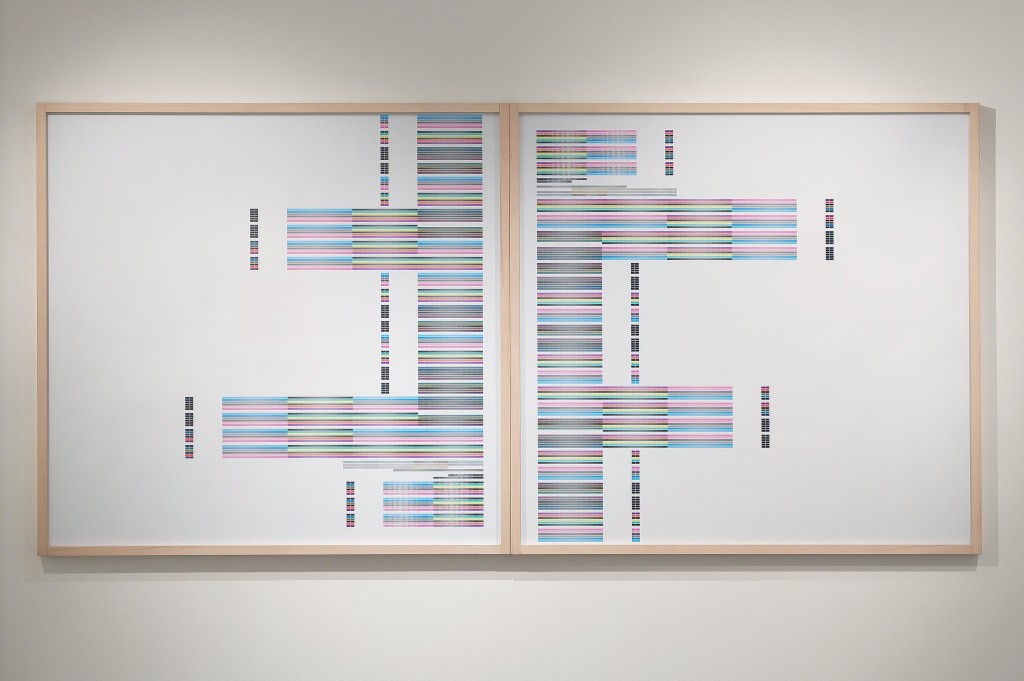 The Swiss painter Johannes Itten used to dress like a monk and abhorred all the kind of machine, the Hungarian artist Làszló Moholy-Nagy had the engineering point of view and thought the machine was the soul of his own era. Both of them taught at the Bauhaus, the most influent modern school of the XXth century. Two opposite dispositions: Itten’s ritual approach and Moholy-Nagy’s rational strictness. Both of them though, have introduced in their works light, than color, than mathematic and it doesn’t mind if one had reached that through meditation and the other through analysis. Among the faithful supporters of Bauhaus’ statements, also the Swiss Max Bill and the German Josef Albers. The latest made squares one inside the others with homogenous layers.  We may say the symbolism of the painting was checked by a rational process, making some tests on the quantity of color of a surface. 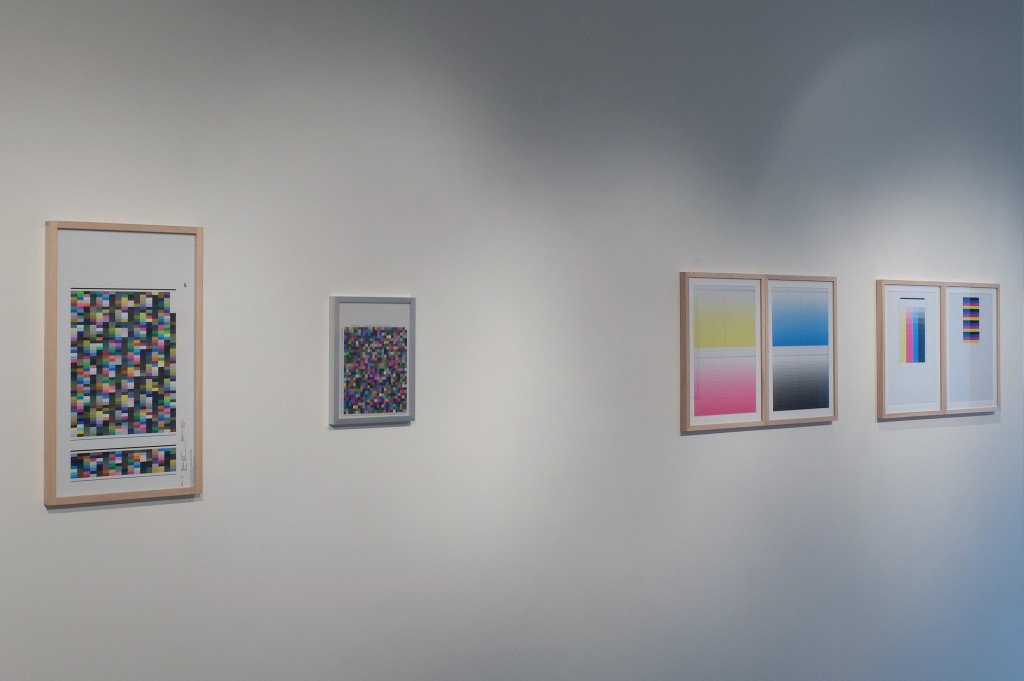 Fabrizio Bellomo considers the works of these artists a kind of preparation of what happened later, carrying consequences even to our contemporary reality. This idea was generated in Bellomo, collecting a big amount of color proofs, generated by digital printers, necessary to control all the electro-mechanical parts they were made of. He collected this material inside photographic laboratories on a good roster of European cities, after the important and inspiring experience of Berlin. Having observed and saved these colored sheets (made by a machine), the artist decided to confront them with the abstract works made by the Bauhaus school.

The exhibition is made in this sense of prints in a unique copy, that Bellomo has saved from the industrial process, along with historical works in limited edition made by famous artists, for this reason both not made by the artist himself, that has just chose and made up these elements, in order to create a wider installation. Bellomo curates in every single detail the set-up of the exhibition, choosing some old aluminum frames and some other handcrafted in woods, so that the iconography of the historic works and the contemporary shapes will become the same concept. 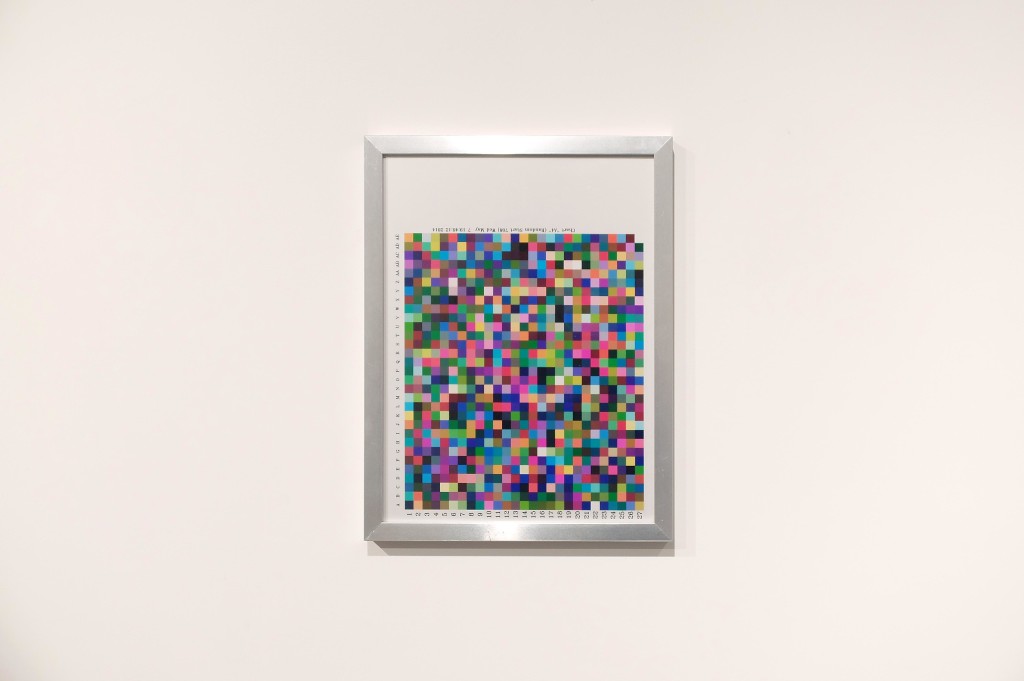 Contemporary print systems, and in general all our world organization through numeric coordinates, are for Bellomo the consequence of Albers, Itten, Moholy Nagy and all their fellow’s theories, but coming back to the IXXth century also Goethe’s color theory and even before Newton’s chromatic disk. The necessity of measure the visible in the XVth century experimented the Renaissance perspective even if, coming back again we shouldn’t forget other precise instruments for geographical measurement (meridian and parallel) and temporal measurement (mechanical clock). The color tests would become today the son of a world driven by mathematical rules.

The one who is writing, is fighting a battle in the last few years so that the XXIst century artist’s point of view will look ahead, not behind and there is a reason to think that Bellomo is reluctant in this sense. In this case, the approach is totally understandable; the act of turning back to our past, in this occasion is more than necessary because it gives more consciousness on today’s knowledge.

The experience we daily made with images it’s almost based on a numeric representation, that is correspondent to a visual information. In order to automatically remove “the inconvenience” from a photography is sufficient to apply some specific algorithms. For this reason the process of digitalization, consists in the conversion of a continuous flow of data (analogic) in numeric representation (digital). These are modular, possible to be programmed several times and convertible into other languages that live in the same informatic landscape. 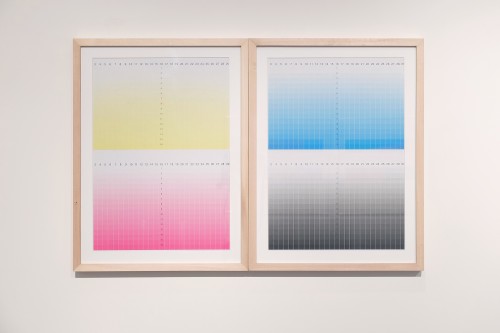 It has been said that Moholy-Nagy has ordered the realization of all the geometric shapes that build the work Porcelain enamel (1922), giving advice through the telephone, thing that is only possible if there is a share code, a share reference system that, measured in the right proportions, is able to convert and share all the information. A paradigm, a mold that can reproduce that signs into an infinite number of exemplars. Bellomo, like the Hungarian artist, in one work that is displayed, doesn’t resist to the temptation of making clear the process of every images’ conversion, making this through the small squares of a book, like a hidden claim to the process the pupils are asked to learn during the time of their education.

On a square sheet in fact Fabrizio Bellomo writes the numeric sequence of the colors that create the image, finding in this way a pleasant correspondence. These handwritten traces, witness the disposition of the artist to behave like a machine, quite translating, making a physical exercise with conceptual meaning.