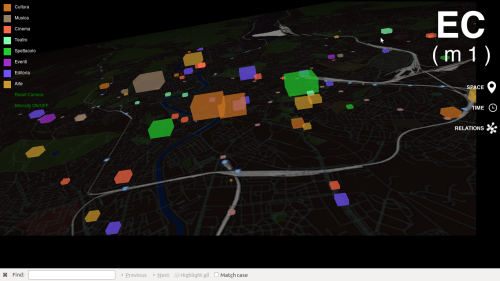 For several years now, Salvatore Iaconesi and Oriana Persico have crossed through art, science, performance and design with their work, using a variety of tools and techniques to analyse the territory with all its overlapping with the invisible layers provided by computer science – the same ones people materialize whenever they communicate and access «connection» devices.

As a result, new methods of observation emerge that enable us to interpret the «techno-environmental» transformations of the territory – more specifically, the urban territory – to make them comprehensible and therefore useful. These artistic interests and the research involved are part of a larger project called «AOS – Art is Open Source», founded by Oriana and Salvatore. This project is an international network created for the purpose of exploring the way people are changing due to the increasing and ever present accessibility of digital technology and networks.

Within the sphere of this macro-project, we would like to retrace its development and the possible applications of their method of «tuning in» to the cities that have evolved from ConnectCity (2008) into Human Ecosystems, a new series of projects aimed at visualizing the urban fabric as it conforms to a «human ecosystem» through Time, Space and Relations. Based upon information captured on social networks in Real Time, we will learn more about which is analyzed and with what criteria to then examine how it is later returned to the common weal and what impact it may have on the territory.

The first of these projects is EC (m1), an Ecosystem in Real Time of Culture for the city created in collaboration with the I Municipality of Rome. For the first time, the method of «tuning in» is the protagonist of a field experiment thanks also to the vision and the open-mindedness of the local administration. Before getting to the heart of the matters of the method and the EC (m1) project, let’s take a step back to better understand the meaning behind the discussion of techno-environmental transformations.

In the past, we saw technological devices as magical instruments capable of ferrying us to distant worlds and new universes where we could exist and operate with «other» identities – a place to return from once we got disconnected. Today, technology has gone from being an «object» to being an «environmental condition». We breathe it, we live it and it has even registered itself into our genetic code as it relates to us in a sort of symbiotic rapport.

It was the very insight to a possible symbiotic rapport between mankind and machine that led psychologist and engineer Licklider, back in the early 1960s, to distinguish the theoretic basis for the functioning of connecting systems which evolved into today’s internet. The way in which this exchange has proceeded and intensified has brought us to the point of being totally immersed a techno-ecology where the confines between real and virtual – natural and artificial, if you will – no longer have a reason to exist. But when did all of this happen? Technology wormed its way into our lives so gradually that we never even noticed that we have become one and the same. 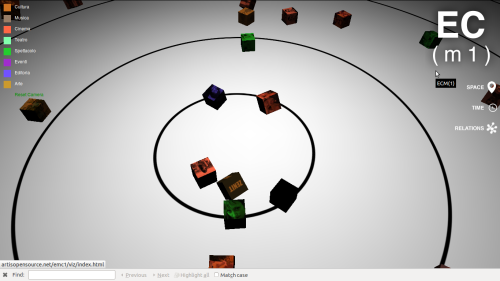 Salvatore Iaconesi and Oriana Persico have analyzed these transformations. The first thing to remember is that they did so in true ethnographic style, as «peer to peer ethnographs», as they like to define themselves. Peer to peer because the material upon which they base their research is information extracted by social networks in Real Time. The realm is a cultural one – in places hosting it, in those creating it, in those enjoying it and in its insertion within an urban grid through the filter of mobile devices.

Appropriation of information and organising it with the help of captivating info-aesthetic visualisations transform a complexity of reports into legible formulas. This way, the territory we call home – the one where architecture and IT intersect – is made visible. Above all, its morphology is outlined for us as it goes global: multiple geographic configurations whose boundaries are constantly changing, are not yet easily comprehended by the naked eye, which is not used to this new spatial-temporal dimension.

Architecture, design, art, science, anthropology, sociology all add up in a collaborative and trans-disciplinary discourse. The intent is to formulate a method to train the brain for transversal thought; an exercise to put the visual field in to practice by acquiring poly-sensorial capacities. But before this, one must sense the existence of the ecosystem and its entity.

Even in the so-called natural life, the realization that we are a part of an Energy that extends matter beyond the confines of the skin only happens to us at a certain point, if at all. It is only invisible to our eyes or (better yet) senses, hidden by a time of perception that is too accelerated to make us capable of seeing or comprehending it.

Their latest project continues this reflection upon a ‘systemic logic’ or eco-systemic logic. Like the biological ecosystem, its evolution depends upon different combinations and relations of events. In comparison with previous operations, this time the theoretic model finds a practical validation through the possibility of effectively acting upon the territory, in this case in a district of Rome. In fact, the administration of the I Municipality of Rome – which embodies the entire central ward of the capital – was ready to accept the challenge and get into sync with the experimentation of an «eco-systemic model». Ecosistema Cultura Municipio I is the acronym in which the title’s «formula» explodes. First of all, let’s see how the project works:

EC (m1) is a technological system, a platform to tune into that is capable of gathering, analyzing and visualizing in Real Time the public activity of those using social networks to express themselves culturally (in this case in Rome). Adopting methods and technology developed in recent years (NLP, Emotional Analysis, Geo-coding and SNA), the system captures the public activity of operators (who publicize and communicate events and initiatives) and citizens (who participate, evaluate, discuss and express themselves culturally in their everyday lives): it includes the subject matter of online exchanges and the emotional states expressed therein.

Information is visualized by info-aesthetics: three mappings that are configured by the three variables taken into consideration. The Space generated in Real Time from the places hosting culture, the Time that articulates the duration of  new added elements that are combined with Space and the ‘Relations’ or the connections (real and potential) that determine the position of each individual within the ecosystem and their function within the eco-systemic grid. Before this ‘ecological model’ is transformed to all intents and purposes one must acquire knowledge of its existence. 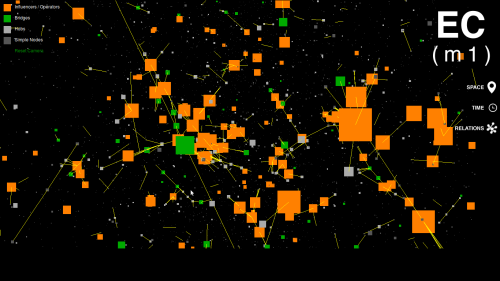 Salvatore and Oriana provide some tools to visualize the ecosystem in which we belong to understand our position and function in order to later experience and modify it as accomplices of its successive transformations. First of all, we must learn to see and ‘hear’ the given information in order to use the nuances in terminology with which Salvatore and Oriana lead us towards our need to boost our poly-sensorial abilities.

There are many cues to teach us how to look at this techno-environment; one of these is the processing of acquired information which, in their info-graphical visualizations, are free of the laws regulating social groups and returned to the common weal in an open-source format. This way we can focus our perception on the Space of the networks for what it really is – a private rather than public phenomenon. The impact that this model could have on the territory (and not only on the Roman area) is full of potential. Among other things, the information analyzed to date of the I Municipality ward has detected the great abundance of operators and their inadequate interconnection as well as the low affluence at events in comparison with the amount of available ones on hand.

Identifying the players in this cultural sphere (producers, users etc) and visualizing their roles in the eco-systemic architecture will most definitely facilitate the forming of new collaborations, the optimization of pre-existing ones and the emergence of smaller creations such as spontaneous communities, operators from abroad and authors of individual initiatives which could evolve from weaker units into important junctions of an eco-systemic structure. Generally speaking, the opportunity to visualize this great amount of information also makes it possible to move around within the boundaries of this ecosystem and recover an active role in order to act in one’s own favour and in that of the community. Once we have gained some familiarity with this new ability to see, many other aspects could be revealed when examining information and from its constantly changing applications.

After years of examination and «tuning in» to many different cities such as Turin, Cairo, Istanbul, Berlin and Hong Kong, EC (m1) has now reached a turning point in the research conducted by Salvatore and Oriana; the theoretical model  finds room for field experimentation and is now yielding its first result.

The proactive entrance made by the Municipality into this ecosystem has carried out – with its presence alone – a radical and irreversible transformation. The «real players» in the city now have all the tools they need to undertake a route to re-appropriation of public space. The ‘real’ one. EC (m1) is an acronym but it is also a formula, as its typographical model suggests, of a flexible thought model that can be used in a different manner every time and open to the defining of new variables.

(1) Salvatore Iaconesi and Oriana Persico, EC (m1), SPACE, the space, the geography of culture  (a map generated in Real Time visualizes the places that produce culture and the places where people express themselves on culture, where citizens visit exhibitions, show and events, from where they move from in order to participate…); (2) TIME, the time of culture (the temporal distribution of communication as it is realized by the operators and by its public who react to the news expressing and communicating reactions); (3) RELATIONS, the relations of culture  (a map of connections that put at the forefront the way operators and citizens relate to each other collaborating, participating, expressing their ideas)