by Dobrila Denegri
in focus, Interview 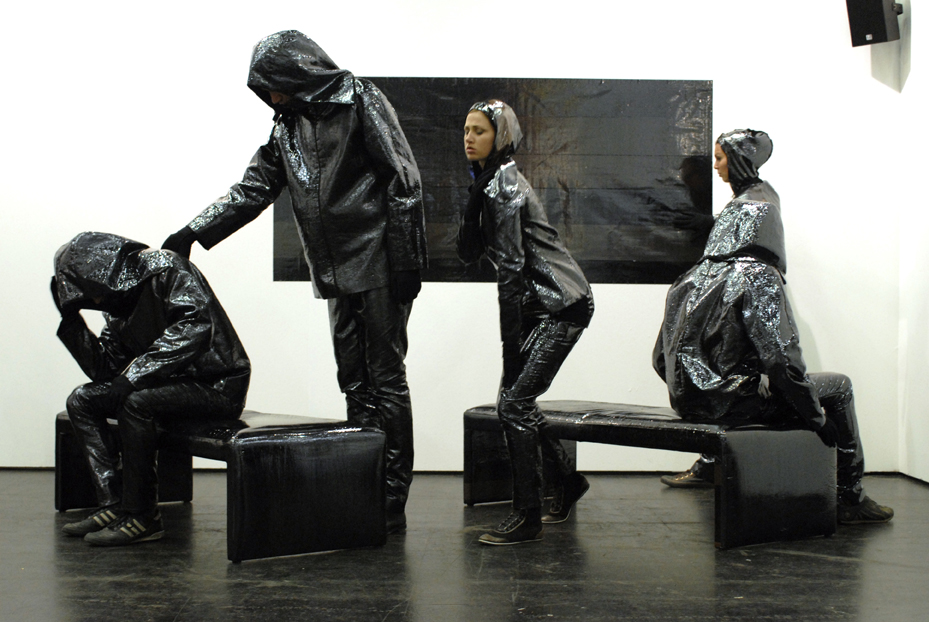 Writing the preface of his book Micrographia, Robert Hooke, an English natural philosopher, architect and polymath  who played an important role in the scientific revolution, called for augmented senses already in 1665. According to his words «its’ not improbable that there may be found many mechanical inventions to improve our senses of hearing, smelling, tasting and touching.» In his time glasses were considered as an advanced instrument. Today we are entering in the age of «wearables» – intelligent «second skins» that are not only augmenting our senses, but actually concurring our entire beings. They are becoming parts of our bodies, indispensable for physical activities and integrated in daily routines. Bodies with technological «attachments», «cybernetic organisms» rooted in our collective imagination since ‘60s, do not belong to Sci Fi literature any longer; they are becoming integral part of the every-day life. Inevitably this «smart second skins» capture imaginative and creative potentials of contemporary artists, stimulating them to search new applications and new meanings. In this direction moves project developed by Martin Rille, Coded Sensation, postulating the possibility to transform the surface of our body into the «sensible container» of data and knowledge, of words and sounds that can be «released» through body-contact. Touching, hearing and feeling thus become equally important as seeing; a synthesis of senses become a way of knowing the world. For the moment it is only a possibility; but that’s exactly what art should do: envision possibilities and open perspectives, allowing us to became aware of our present and even more of our hypothetic future. Seeing sculptural and performative works by Marin Rille make us believe that future is closer than we think: it corresponds to a time-dimension in which we are able to «unfold» our stories through sensible body-films that make us «speak» through the movement, guide us in a sort of a sensuous dance enhanced by mysterious music and noise produced by dark and shiny «sound» suits. Suits, made of audio tape and entirely sustainable, besides potential futuristic scenarios, trigger awareness about environmental urgencies of our present time.

Dobrila Denegri: Martin, I remember when we first met, quite some time ago, you were doing works inspired by some of the icons of SciFi world. Could you tell us something about your initial interests -in art and beyond- which led you towards what you are doing now?

I always wanted to be an Inventor since I was a kid. I disassembled radio controlled toy-cars and built new things with the electrical / mechanical parts inside. Before studying art I finished a technical college because of this childhood dream. During my studies of art in Vienna I first started with video art were my science background met the art world.  My initial interest is expressing art through self invented technology.

How did you start to develop Coded Sensation and where is it leading you?

After visiting a workshop for body awareness / movement / touch I got the idea to have Information stored on the surface of our skin which could be «read» like brail letters are. Then seeing a work of Nam June Paik and having been working at SONY repairing Walkman’s as a 16-year old I knew that CODED SENSATION would be possible with the magnetic tape of audio cassettes.

Could you tell us more about process of making the piece Coded Sensation and with whom you have been collaborating on it’s realization?

It started in 2008 with a performance in Nitra (Slovakia) together with Artist Amber Gabrielle. 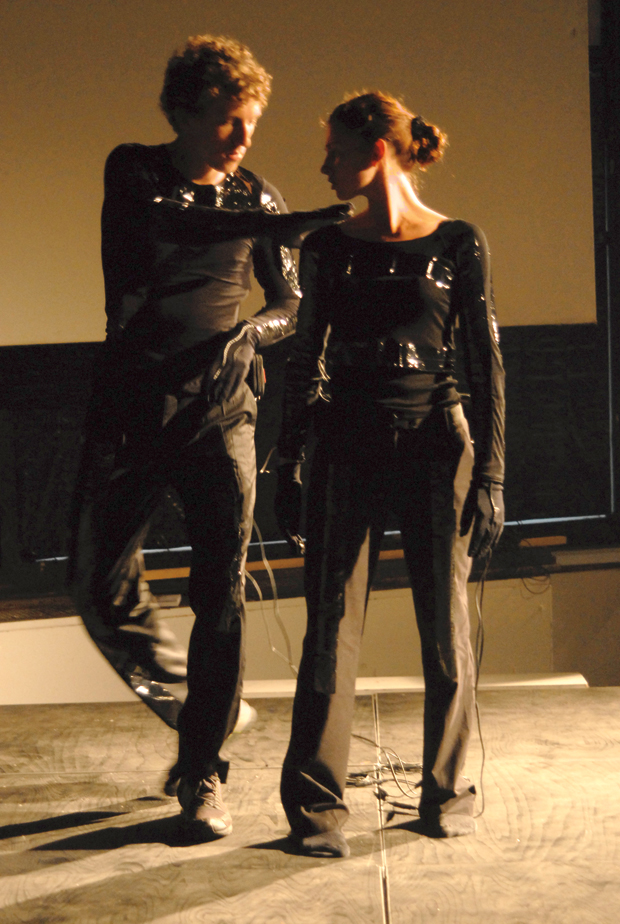 After this first performance and technological demonstration I built a machine with Artist Max Frey to seamlessly manufacture magnetic tape cloth. Whole suits where created and reading was built with wireless transmitters. With Artist Sarah Hyee we developed suits that would make it possible to move with the flexibility limitations of the produced CODED SENSATION material. 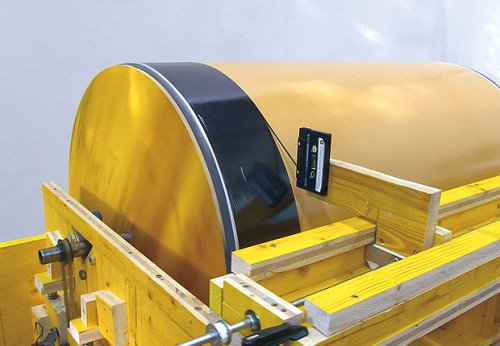 How would you define yourself, as an artist? performer? inventor? designer? … and how all this practices interrelate one to another in your case?

I like the term Inventor. But all ideas or inventions rest and rely on the work of others. For the realization of Coded Sensation I have to thank a long list of people. But I see myself as an artist, because I take the invention a step further, into art.

Could you tell us more about you design project Squat?

I attended a wood-workshop «build your own sitting tool within a week» at the art university in vienna and designed and build the SQUAT there. The small cubes move and adapt to your body. I developed a mechanism for it and it got patented in 2012. 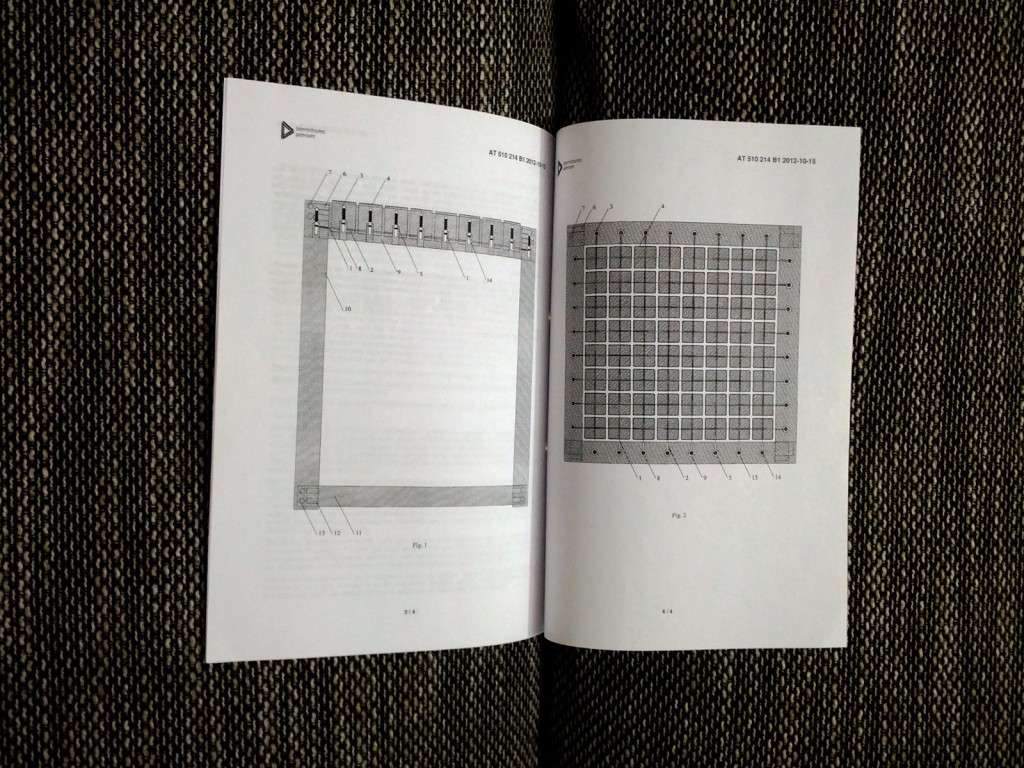 What are other projects on your horizon?

Im building a new prototype, its currently in development. A new work after CODED SENSATION.