Masbedo. Images to Handle With Care

by by Simona Brunetti
in focus 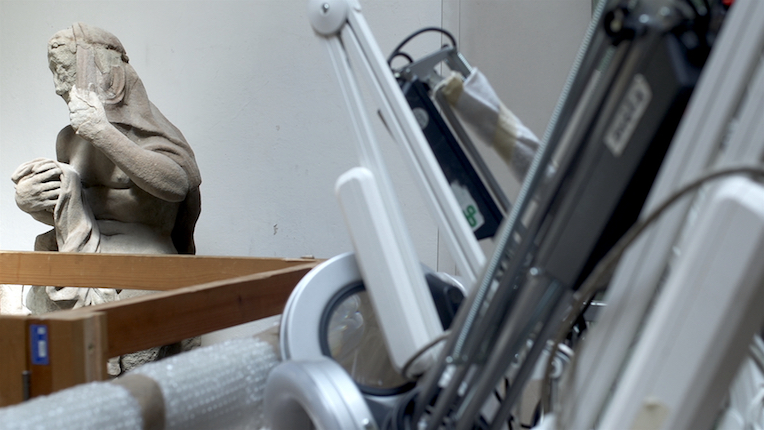 Arshake is pleased to relaunch, traslated into English, the essay by Simona Brunetti on the work by Masbedo published on April 14, 2017 on Alfabeta2, Italian magazine initiated by Nanni Balestrini and Umberto Eco in 2010 as a monthly review of cultural intervention.

Cesare Brandi’s theory of restoration states that matter is indispensable to achieve “the epiphany of image”, in other words, its self-manifestation. Brandi bases all his discourse on restoration on this claim, which sets the work’s materiality free from any condition of schism or otherness in relation to the abstract idea. This theory has represented a guiding light for generations of restorers who work on those ancient and modern pieces that embody the concept of restoration itself, both structurally and ontologically. In contemporary art, however, where the process, the very act of becoming, and transience are all intrinsic features of the art work, researching these themes inevitably takes place on open, yet slippery ground. It is also worth noting the complete lack of artists’ voices in a debate that involves mainly conservationists and restorers in assessing the destiny of a work, its ability to travel in time, its survival beyond the life of its creator, thus transforming itself and, in the process, conveying multiple epiphanies of meaning. This is why a project like Handle With Care by Masbedo, curated by Paola Nicolin within the framework of The Classroom, carried out with the support of the Centre for Conservation and Restoration La Venaria Reale and promoted by the Opificio delle Pietre Dure in Florence, represents a rare and significant artistic contribution to the semiotic interpretation of conservation works. 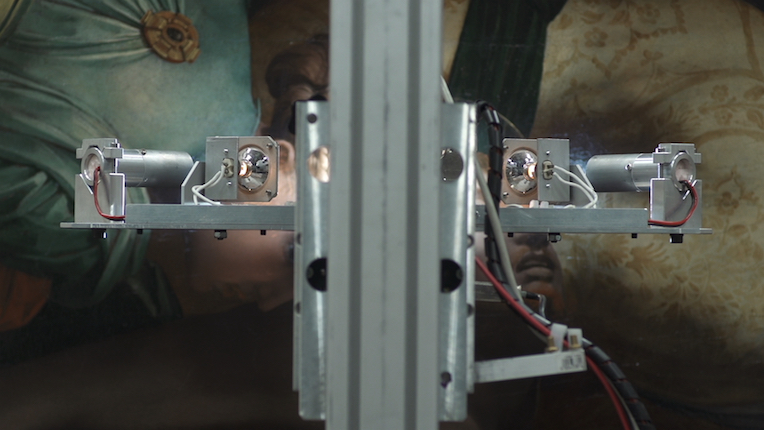 The installation – articulated on six screens and exhibited in October 2016 at the Opificio in Florence, in January 2017 in the Scuderie Juvarriane in the Venaria and from next autumn at the Castelbuono Civic Museum – reveals a private space, which would otherwise have only been accessible to insiders, to the general public. This is not only a physical space, but also an interior dimension where the artists engage in a profound reflection on what Jacques Rancière has called “the future of the image”. This is also reflected in the book, Psychic Diary, which presents an analysis of a contemporary art exhibition (Quodlibet 2016) through the notes, reflections and email exchanges between Masbedo and Paola Nicolin during the project’s preliminary stage. The research undertaken by these two artists could only begin here, in these places/secular temples where restoration rituals and liturgic ceremonies, as well as prior research on conservation, are celebrated daily. In this very space the work loses its sacred aura and reveals itself in its secular material dimension. Paintings and sculptures are plumbed, laid bare by optical scanners, and are subject not only to restorers’ careful examination, but also to clinically and surgically precise operations of conservation. 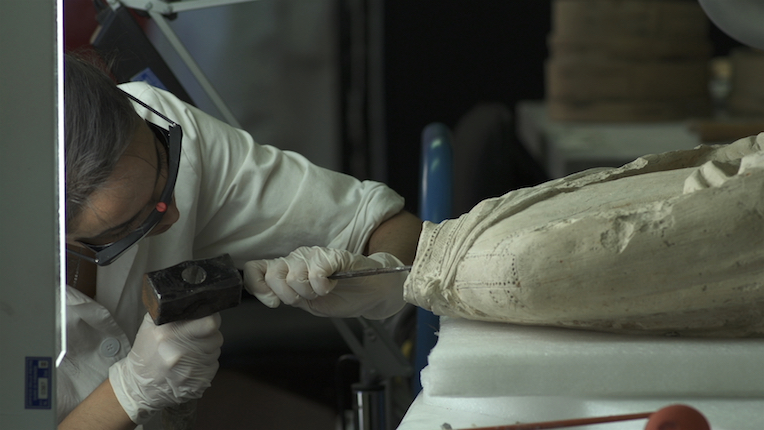 The video, one of today’s most immaterial and transient modes of expression, is entrusted with the task of investigating these mediation process between the world of matter and the realm of the spirit, describing restoration practices as a mechanism that operates within a bigger mechanism, which is none other than man’s attempt to stop the passing of time. This is done not by indulging in the fetishistic obsession with the object itself, something that would already spell death, but rather by insisting on the process in which matter regenerates itself. This might very well take place on the restorer’s operating table, but it involves us all and must be of interest to us, spectators included, for the mere fact of being embodied subjects. 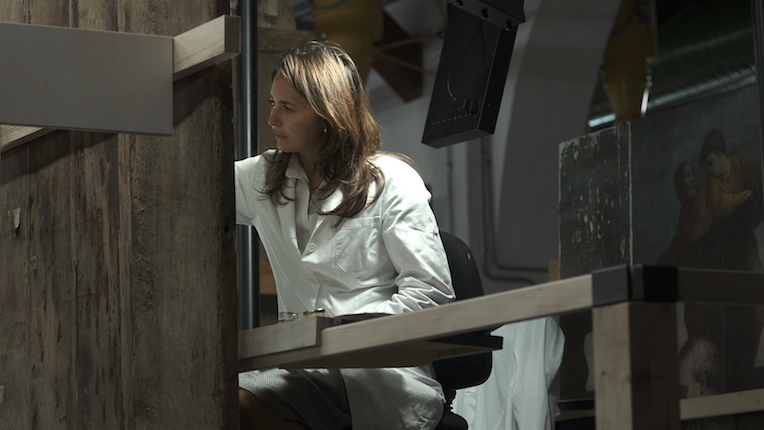 In this context, a visual comparison with one of the most iconic works in the art history, The Anatomy Lesson of Dr. Tulp, acquires legitimacy. The difference between Rembrandt’s famous painting and other similar works of art is found precisely in the feeling of compassion emanating from the work – compassion in its etymological sense of cum-passio (with affection) – that brings the subject matter of the representation and the observer together in front of a corps which is about to be dissected; compassion that develops from the shared knowledge of being part of the same life cycle. The widespread warmth surrounding the scene in Rembrandt’s painting is a metaphor for humanity’s feeling of compassion that, as in Masbedo’s work, counteracts the apparent clinical coldness of the setting. In the same way, in the intimate space of the restoration lab, surfaces of paintings and sculpture pieces reveal, with their ‘wounds’ on display, at times both in an iconographic and metaphoric sense, the unsettling truth about time, a generator of both life and death – a process which even art is not immune from despite its longing for eternity. Wounds can be sewn up, surfaces cleansed, voids filled: everything is given over to the loving care of the restorer, whose movements and glances are captured in an entire video, one of the six making up the installation. 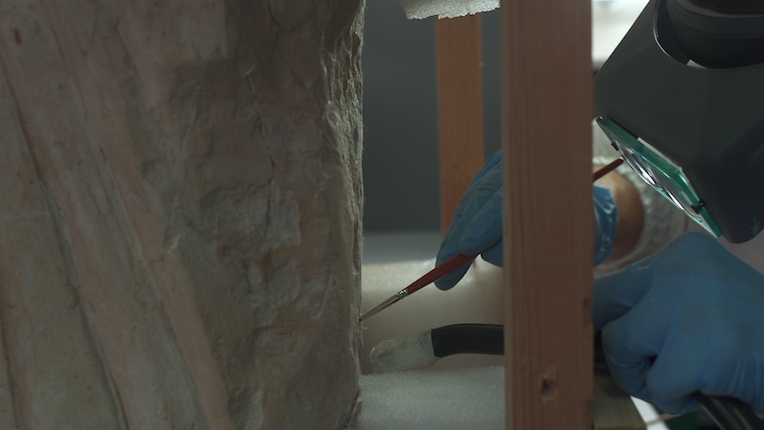 All this translates into a work that, attentive to the great lessons from avant-garde cinema, is conceived as an organic mechanism in which every element has a function in this totality and is a function of totality. Following on from this reference to experimental cinema, the installation’s ‘orchestration’ of images and sounds recalls the work of Dziga Vertov on physical rhythm. 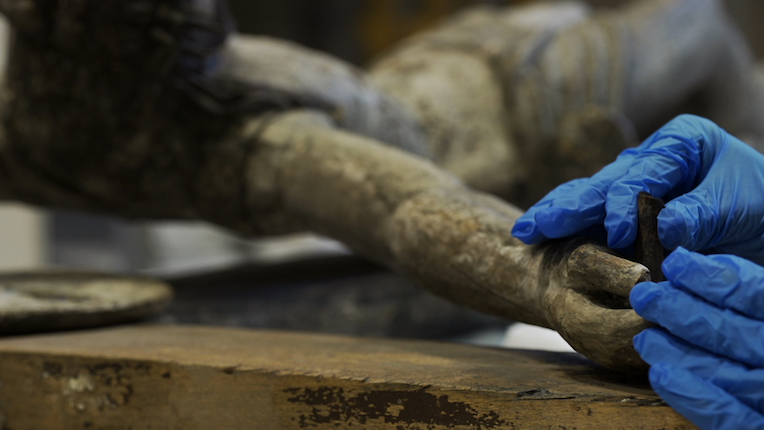 This can be seen in The Man with the Movie Camera (1929), a masterpiece of Soviet constructivist cinema, where every so often Vertov enjoys bringing the flow of images to a halt and, thus, positions his film subjects at the same level of his space-time narrative. Similarly, at a certain point, the installation’s narrative is subjected to an epistemic rupture. This occurs when all screens realign onto one shared image and sound: a printer reproducing a high resolution optical scanner, which is a direct reference to the serial processing of images that, at a time of “technical reproduction”, proceeds independently, removed from the images’ unique and authentic features. This halt is necessary because, as Giuliana Bruno (The Atlas of Emotions, Johan & Levi 2015) stresses with reference to Vertov’s editing dynamics, “it has the power to free movement”. “Cinema” – adds Bruno – overcomes the death of the “fixed” image. This is similar to the process of elaborating grief, life carries on.” 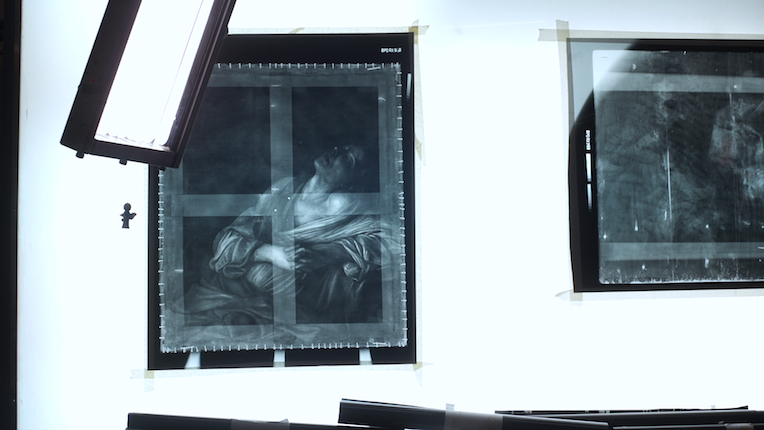 From this perspective, the craft of a video artist and that of a restorer appear to unexpectedly intersect: both act on the image following postproduction dynamics and thought processes that give the art work a “lived” meaning, which changes and shifts with time. Ultimately, Handle with Care is a written experiment and a videographic work recording an alternative History of Art: one where time becomes part of the storytelling process and part of a methodological analysis, placing alongside each other generation and regeneration, image and process. 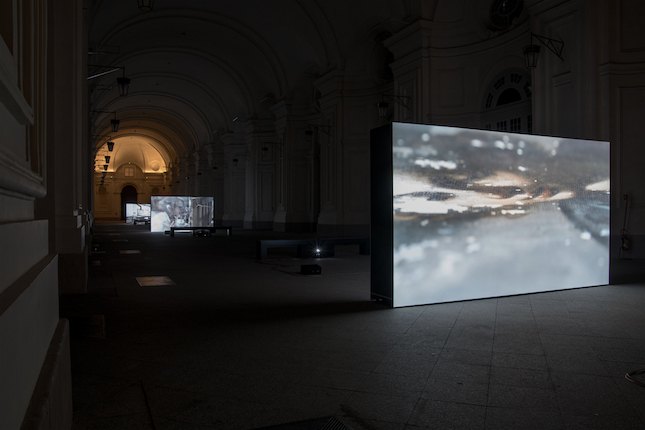