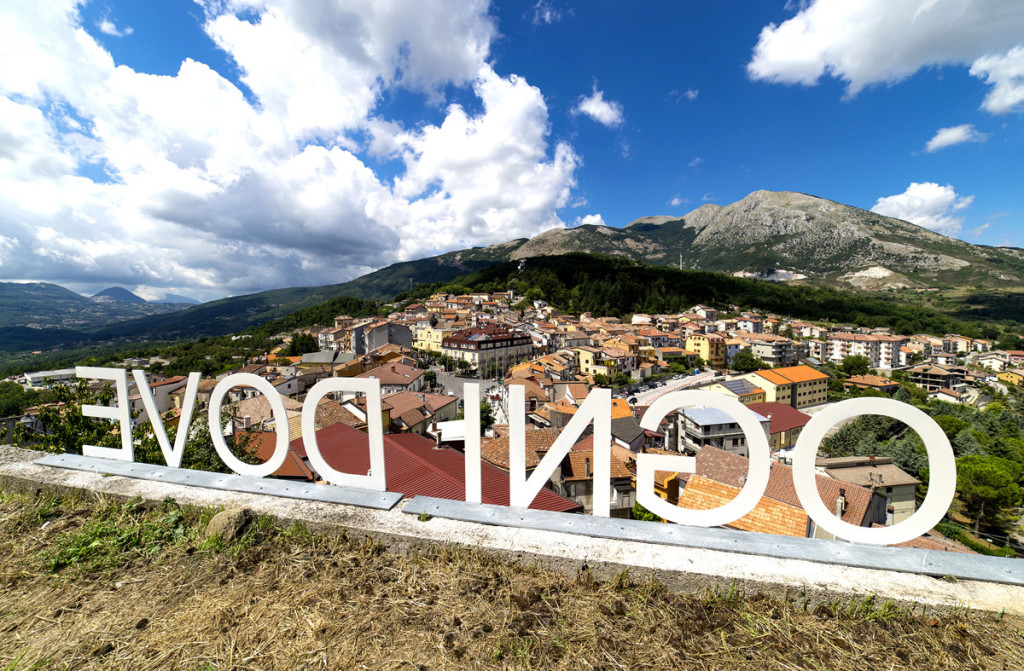 In the Basilicata town of Latronico there’s a contemporary art project which has led to the creation of an “open air” collection. The Vincenzo De Luca association, founded in 2005 in tribute to the local artist who died prematurely, set out to “recruit” artists from all over Italy to sustain and keep alive Vincenzo’s memory in the land of his birth. The idea soon turned into a public art project which over the past ten years has involved a succession of artists who, in conjunction with the local residents, have created a series of permanent works located around the town’s historic centre. A Cielo Aperto is a project geared to the creation of a widespread museum, turning Latronico into a place where art is employed to study, preserve, valorise and present the collective memory of both the community and its land. 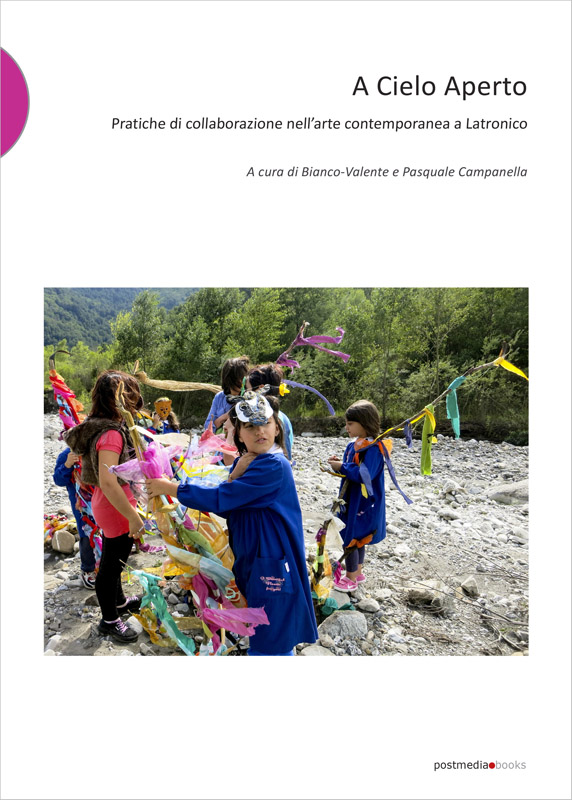 The tenth anniversary of the art project sees the publication of the book A Cielo Aperto. Pratiche di collaborazione nell’arte contemporanea a Latronico, edited by Bianco-Valente and Pasquale Campanella: another shared work, and an enormously valuable text which brings together reflections, statements and contributions by individuals who have taken part in this complex event made of art, but above all of relationships.

The project has created a microcosm in which art and life fuse, offering those who come this way a dimension that is above time and space. The works are a symbol of an indefinable territory in a state of constant transformation, just like the art world itself. After all, the very definition of “public art” encompasses infinite nuances and a series of contradictions which make it impossible to rigidly define the scope of art which, in this particular case, for example, arises from a policy of sharing in which participatory action occurs in the public space without recourse to funding by the municipality or institutions – nevertheless these are involved in other ways – and at the same time sustains a practice of hospitality which has now become rooted in the town.

In fact, particularly in the summer months, Latronico turns into an artists’ residency; the entire community takes in artists, musicians, critics and cultural mediators, who join the life of the town, immersing themselves completely in the social fabric and memory of the place, and thus generating new points of contact between art and life, as well as countless prompts for investigation in the form of reflections which take shape in artworks but also in critical essays, gathered in the new publication and signed by Maria Teresa Annarumma, Pietro Gaglianò, Elio Grazioli, Marco Petroni, Alessandra Pioselli, Leandro Pisano, Pietro Rigolo and Gabi Scardi.

Maria Teresa Annarumma’s contribution, with the seemingly ironic title Latronico è più grande di New York (Latronico is bigger than New York), focuses on the relationship between Local and Global, and from the starting point of a strong belief in the historical and social vocation of art, highlights the extent to which attention to the local is needed in order to understand the dynamics and potential for collective growth, which in a megalopolis such as New York are cancelled out in a process of “depersonalisation in any type of practice, from the commercial to the political”, thus creating a “sense of distance and mistrust, due to a progressive loss of contact with the personal and social dimension”. Small-scale projects therefore become observatories in which it is possible to find and rescue the relational dimension necessary for the preservation and valorisation of collective memory, the only antidote to the self-centred consumerism associated with the categorical imperative “I consume, therefore I am” written of by Bauman, paraphrasing Descartes. 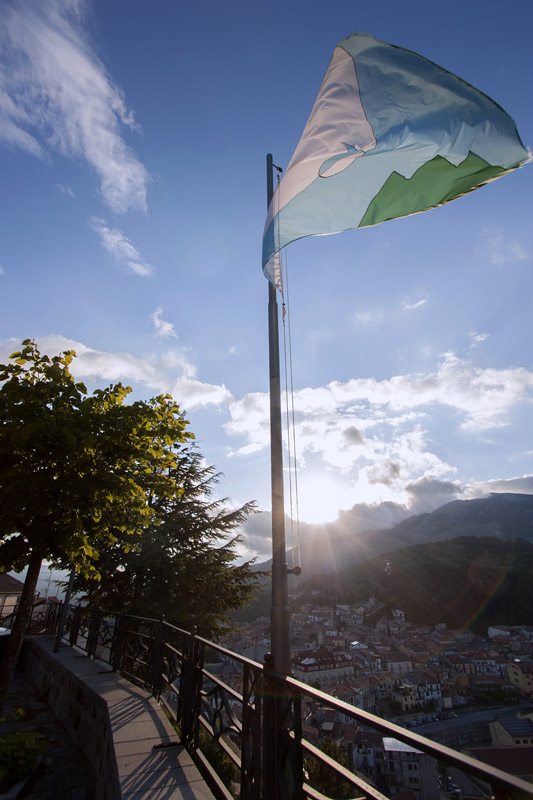 Meanwhile, in La politica del sottile, Marco Petroni reflects on the various interpretations of the concept of community, and acknowledges A Cielo Aperto to be a stimulus for the inception of a virtuous circle, a system of trust which establishes “a giving economy capable of creating a pure community that does not seek conflict with institutions and inhabitants but rather an alternative relationship based on the transmission of knowledge through contemporary art”.

For Gabi Scardi, A Cielo Aperto is a concrete example of the close and intense relationship between art and anthropology since – she writes – “the ethno-antropological component is part of the overall framework of the project,” which aspires to “reconquer, reinvent, constantly regenerate the material fabric, but above all the immaterial, symbolic and relational fabric we have at our disposal”.

Maria Teresa Annarumma, Marco Petroni and Gabi Scardi’s contributions are only a few of the stimulating critical viewpoints which analyse the art event as a point of intersection between the trajectories that link Latronico to the world and art to disparate forms of knowledge, thus creating an osmotic relationship with the human sciences, economics and geography, while never losing sight of the key concepts underlying the project, including that of identity and participation, which are present in the works created with and for the community and meticulously described in the book. One of these, Eugenio Tibaldi’s Una bandiera per Latronico (A flag for Latronico), involved the residents in the conception, design and production of a flag to represent Latronico, a symbol in which all the inhabitants can recognise themselves, “a flag which as such can contain the tensions and the conquests of anyone who feels represented and which can flutter in the wind, becoming a mute witness of a social sentiment”, as the artist explains in a text included in the pages of A Cielo Aperto.

Cènte by Wurmkos is a work based on the close links between art and territory, a genuine excavation, an investigation that starts with an ancient custom: the creation of cènte, devotional objects which become small monuments, “wearable sculptures” the alter ego of the people who make them and ultimately carry them in a “festive procession” which marks and modifies the space, interacting with the place, the community and memory.

Lastly, the duo Bianco-Valente tackle the issue of emigration, a phenomenon which is highly relevant to Latronico, with their work Ogni dove (Every where): a large slogan in white-painted metal installed on the slope of the headland on which the ancient town stands. This constitutes “a line of meaning which alters the normal perception people have of that landscape or that setting”, as the artists affirm in an interview with Elena Giulia Rossi which is recorded in the book. Bianco and Valente’s work, then, amounts to an enormous postcard addressed to those leaving their birthplace, but also to those who have decided to stay, and more generally to the continual flow of people who overcome limits and cross borders in search of new opportunities in life. The slogan superimposed on the landscape “evokes the many real and immaterial places in which people live or leave traces of their passing”, because all of them can find in “ogni dove” part of themselves.

In conclusion, A Cielo Aperto is not merely a text that gathers fragments of a lengthy, intensive and complex experience, but a tool for knowledge and investigation, an open-ended work.

An open debate at the CSAC Museum-Archive.

Kirsten Stolle – Proceed at Your Own R

Kirsten Stolle - Proceed at Your Own R