A DataMeditation for a New Living

A meditation through data

by Giorgio Cipolletta
in exhibitions, focus

To meditate [from the Latin meditari, frequentative of mederi “to cure”] is a complex, unique action. From its etymology we derive the act of caring, taking care of oneself and reflecting. This operA(c)tion conquers the capital A with a noble act. This performance rests on the “bipolar” back (the going up and down) of the first letter of the alphabet, which creates, becomes operAtional and, at the same time, produces actions or, rather, rel-a(c)tions.

In this phase of intense “spiritual” concentration, meditation acquires a unique, intimate, profound moment of facing oneself, with oneself.

And suddenly Datameditation comes along? A meditation through data. 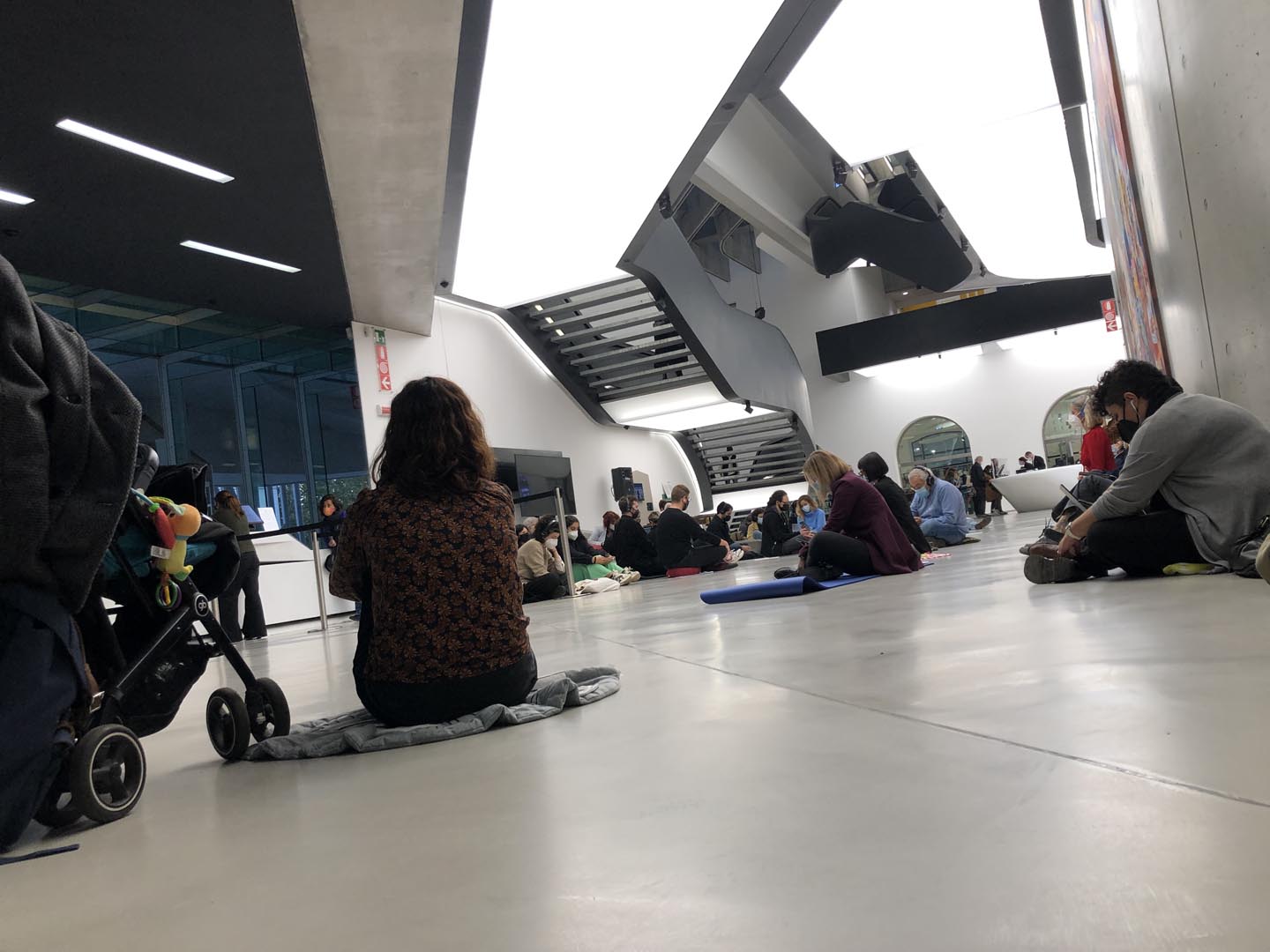 Salvatore Iaconesi and Oriana Persico’s Datameditation project emerged, for the first time, during the pandemic (Covid19) over the course of an online workshop in Amsterdam (20-25 July 2020). This data-ritual consists of a daily meditation through data, creating meaningful relationships and rethinking data in a way that is no longer extractive, but existential. Recovering this project by the eclectic couple Iaconesi and Persico,, and giving it a new context and a process of critical thinking for a New Living (Nuovo Abitare), the founders of AOS (Art is Open Source[1]) have built an endecalogue[2], composed of eleven “principles that govern a different way of relating to the “sensitive” environments (sense-ability) surrounding us, generating alliances between human and non-human actors (AI, organisations, plants, oceans…) that find in data the red thread on which to sew the complex and intimate plot of relationships and the expression of a social imagination.” 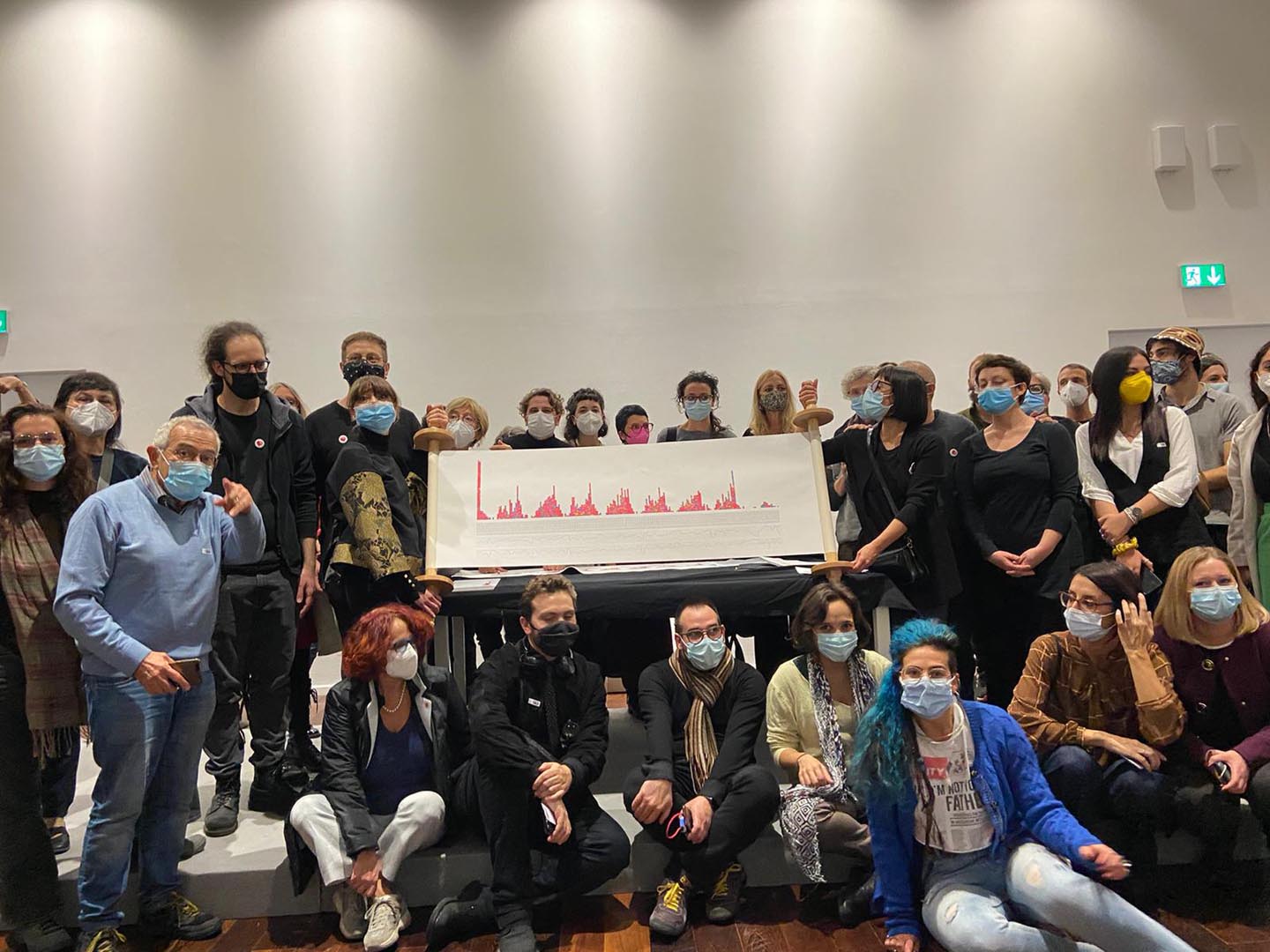 On the occasion of #All4Climate-Italy 2021[3] the MAXXI Museum in Rome hosted the DataMeditation project. A meditation for the Environment. The Persico-Iaconesi duo, artists and founders of the research centre HER: She Loves Data[4] and Nuovo Abitare,[5] together with the (digital humanities) philosopher Stefano Capezzuto, the process designer Daniele Bucci and Cecilia Marotta for communication, created the project, between art and science, in which participants are invited to experience the practice of meditation through technology and applied to our relationship with the environment and society. 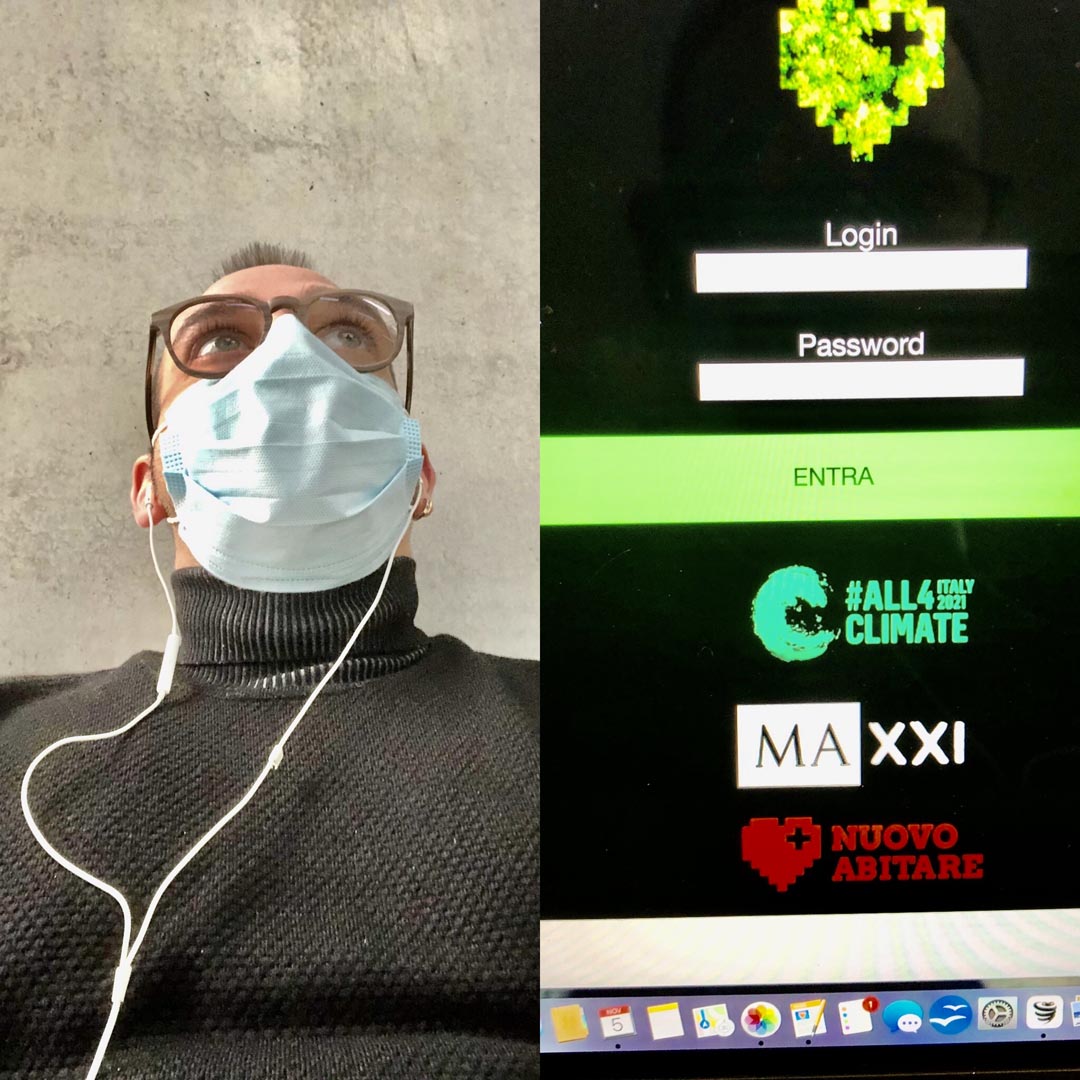 Every day – from 22 to 29 October 2021 – future data-meditators (about eighty, between 19 and 76 years old), chosen after an open call[6] (which saw more than two hundred submissions), had the opportunity to participate in this wonderful and “explorative” (so near, yet so far) experience. A web app[7] (based on Ubiquitous Commons[8]) allowed participants to express themselves through data, providing a testimony of their relationship with the environment through a “message in the bottle” for their Other chosen by an algorithm (that they do not know) and with which they will form a present-absent-remote pair for the entire meditation period. Every evening, each participant joined in a meditation ritual. The data generated during the final 24 hours was transformed into sounds and texts at the start of the meditative practice scheduled each day from 21:00 to 21:15. Each data-meditator’s data was played through headphones in the left ear (stereo channel and the side of the screen displaying text), while their Other was read and listened to with the right ear. For a week, all participants had the opportunity to imagine an Other, to take care of them, devote themselves to them, reveal themselves, communicate and form a relationship, while also thinking about different environments. 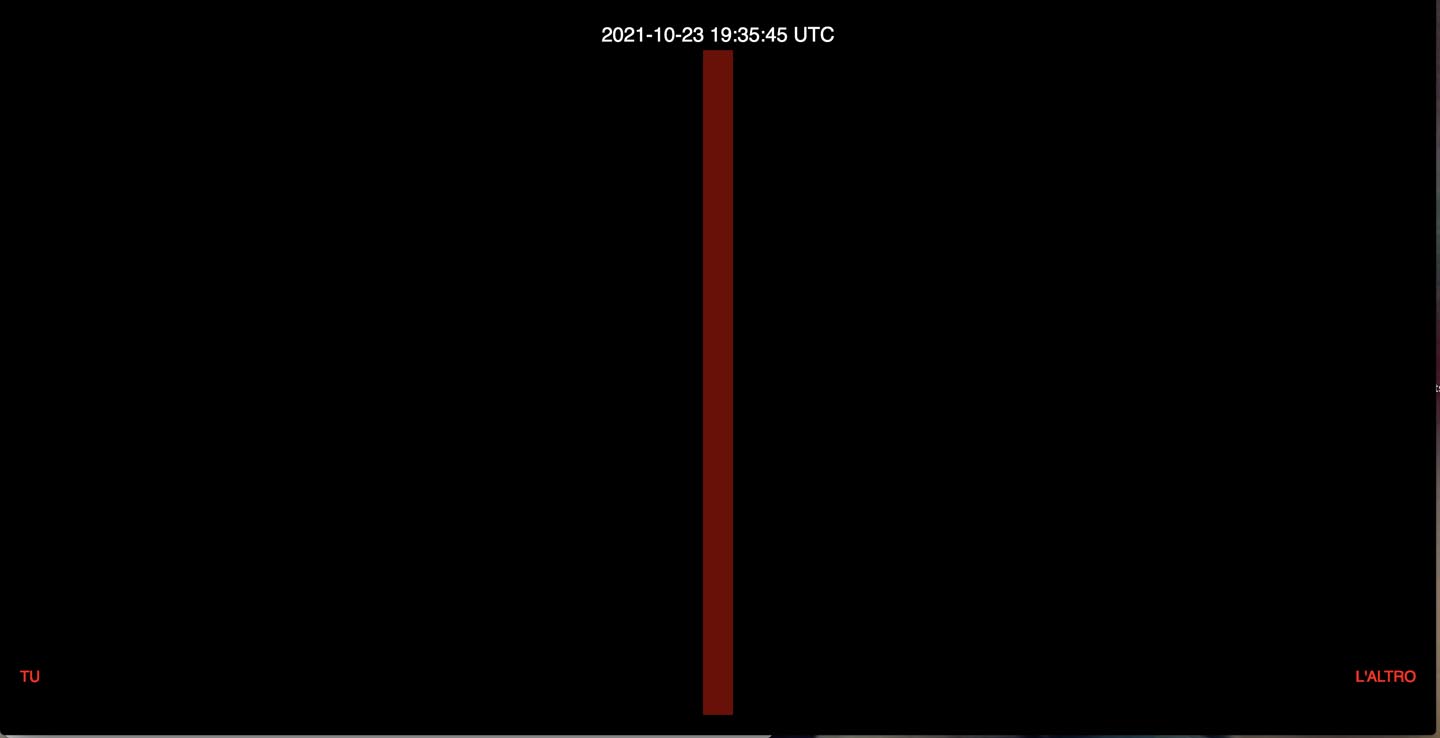 In a final choral performance on 5 November the data-meditators, having generated this ubiquitous and participatory relationship, met at the MAXXI Museum in Rome for a final meditation in which the presence-absence experienced up to that moment dissolved in the encounter of the pre(es)sence. The choral Datameditation encapsulated in its “poetic”, almost “spiritual” form the possibility of meeting the Other and exchanging gifts such as “postcards” (and many other objects). Over the next two days, the MAXXI Museum hosted an exhibition bearing witness to this experiential journey. With DataMeditation – an architectural module of datapoietic experience[9] – the generative team of Nuovo Abitare has “originated” existential and expressive possibilities within the widespread relations economy, where bodies of data and data-bodies have produced a degree of plural existences. This datapoietic meditation was a gymnastic thought exercise to train the ecosystems which we are part of (human and non-human), a ritual that experiments with a “technology of the self”, creating magic and empathy in an environmental short-circuit. Being in tune or not in tune with the environment is crucial to an understanding of how much we are in “tune” with ourselves, environments within environments. Being inside or outside the comfort zone. Being in and with the interface. Because the interface knows that it is “shameless” in weaving relationships, it interacts, produces and generates other things, both inside and outside of us. Interface is an environment that requires care, patience, conflicting with technical fact and technological logic. The debugging process (crucial in the post-meditation phase) is resolved in the error itself. An error from which a process of generation and operA(c)tion is born. It is precisely in the act of giving, of deciding to participate in a choral act that requires unfulfilled expectations and expanses of emotion qualifying a non-human existence, but “transpecific” with elements from the environment. A New Living (Nuovo Abitare) requires a new outfit and the outfit demands relationships, so that they can be transformed into actions that, in turn, generate data, which unmeasure rather than measure.

DataMeditation is generative info-aesthetics (an analogue-digital Torah) where data, stories, biographies, together with polyphonic, collective and connective narratives are revealed; where the self becomes “we”.

Nuovo Abitare gathers the emotional peripheries in its cosmology (cosmogony), centring and decentralising them in a ritual that expresses, excites, gives and heals in the incredible interweaving of the Other, in the Beyond (without disturbing Mr. Zuckerberg and his Meta-) until the end. Because we need art more than ever. Salvatore and Oriana, together with the entire undisciplined team of Nuovo Abitare, represent the authentic expression of a complex process that generates poetry, performs, connects and amazes. Datameditation is a space to inhabit, to host, a territory of ensemble where the sum is more than its parts, to then build an Archive (of rituals)[10], knowledge graphs tracing eXistences, constellations, bodies (bodiesquake), satellites and architectures where the stars shine and radiate.

Meditation involves an intimate, unprecedented act pouring itself out through data; generating networks, connections, environments and co-existences of opportunities to give, receive, feel and listen to oneself within a “tragically” emotional, transformative geography that is continuously re-written and re-listened to, like a loop that pulsates and generates wonder, beyond infinite existence, d-e(x)istence, r-e(x)istence in an exit of vowels and consonants where the spelling becomes “data” (i.e. given) meditation.

Her She Loves Data/Nuovo Abitare, DataMeditation. Una Meditazione per l’Ambiente, 2021

workshop online realized by Her She Loves Data/Nuovo Abitare and an encounter and project at the MAXXI Museum in Rome, curated by Sofia Bilotta e Agnieszka Smigiel