A short note about Visual Poetry

Poets, as we all know, are explorers of words. But what happens when words are not presented in their pure state and tend to be combined more and more with images? Words and images are placed together in advertising, newspapers, cinema and on television. And yet not even then can poets desert their quest. Visual poets do not idolize content nor reject it. They are constantly inspired by it. […] poetry as the exclusive art of the word is no longer possible. New poetry wants to be a general art of the mark [1].

Emilio Isgrò’s moment of awareness dates back to 1966. It is only one of the first episodes that admitted to the altered condition of poetry as an artistic practice. Poetry resumed demolishing traditional linguistic barriers and conventional syntactic restrictions in the 1960s, vigorously placing itself on the fertile terrain of experimentation. As a whole, these experiences fit under the (possibly restricted) classification of visual poetry, a field broadened by aesthetic-literary operations – an area of contact and «convergence of much the most serious research» (Argan). The mapping designed by Lea Vergine accentuated the essentially Italian trait of this phenomenon – without omitting the Swiss fathers of concrete poetry (Gomringer, D. Roth) or the Brazilian ( the brothers Augusto and Haroldo de Campos) and Czech (Kolar) groups – as she proposes a certain variety of names in the substantial simultaneity of her roster: the Technological Poetry of the 1963 Florentine group (Pignotti, Miccini, Marcucci, La Rocca, Ori, Malquori); the Neapolitans (Martini, Caruso, Rubino, Piemontese, Nazzaro); the collage and graphic experiments by the Romans Balestrini, Giuliani, Pedio, Porta; between Bologna and Milan with Vicinelli and Sanesi; the essential contributions of Carrega, Spatola, Martino and Anna Oberto, Accame, Isgrò, Bentivoglio, Vaccari, Mignani, Vitone, Landi, Ferrari, d’Ottavi, Niccolai, Nannucci, Mussio, Xerra, Perfetti and Sarenco[2]. The affirmation of Visual Poetry is the witness to that short circuit (painting to be read or poetry to be seen?) which, as Pignotti commented, is the appeal to an image to reveal the limit of the word while the word accentuated the debilitation of the image. The operative trajectories of motion comprehend a change of view of sign structures (alphabet letters, ideograms, cursive, arabesques, images) and a repositioning – an authentic re-signification that is no longer found within the standard spaces of a text but (as Lyotard suggested) within the spaces of the image where “significance acquires a meaning of itself, for its physical, material and plastic qualities”[3]. Menna stays on the same track when he retraces that autonomy that “ut scriptur” art has claimed, invading the space of figurative art[4]. 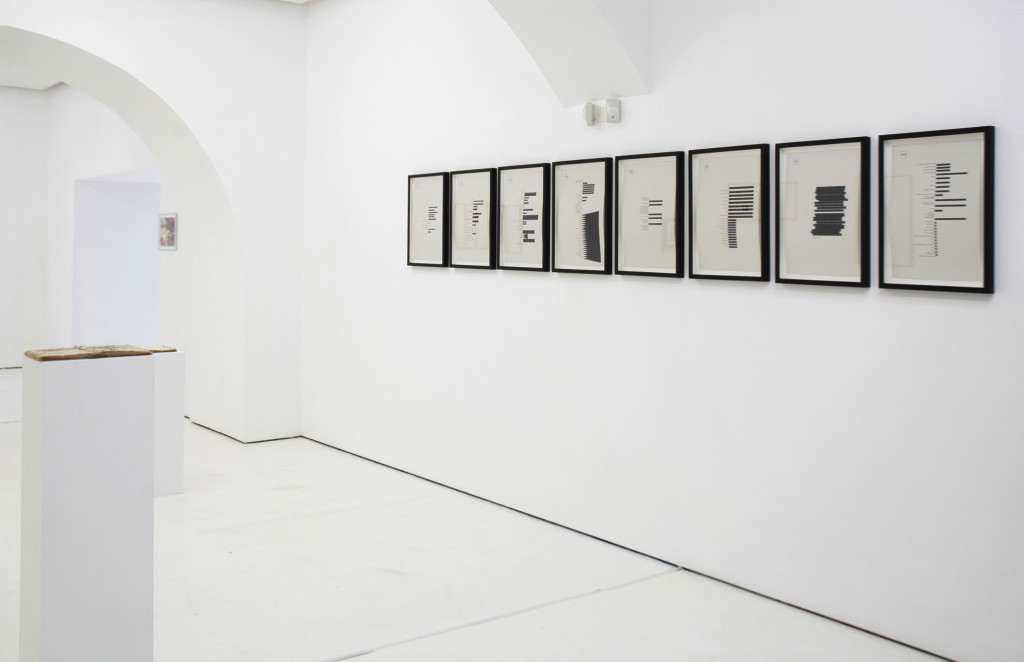 For that matter, Menna’s premonition of going beyond confines and experimentation described as «an increasingly driven fusion between verbal and pictorial» would be embodied in a work by Barilli. In 1981 he reported the crisis that literature was facing as it prepared to leap over the used-up space of the sentence. (Viaggio al termine della parola. La ricerca intraverbale – Journey into the end of the word. Intra-verbal research, Feltrinelli Publishing, Milan 1981). The contributions needed to officialize this artistic trajectory arrived – as they often do – from magazines and art exhibits – the timely and prompt seismographs of any manifestation of human creativity. If Lamberto Pignotti is a spokesperson for technological poetry through his cartoons, stamps and photographs as well as through those fundamental essays published in  «Questo e altro» and «Paese Sera», Florence’s Galleria Quandrante was the place that raised visual poetry in 1963 with the «Tecnologica» exhibit that presented works by painters Bueno, Loffredo and Moretti, musicians Bussotti and Chiari, poets Pignotti and Miccini. The authoritative voice of Dorfles in 1965 (Nuovi riti, nuovi miti,- New rituals, new myths, Einaudi Publishing, 1965) placed attention on the introduction of linguistic elements changed by the technological and advertising fields whose grasp of poetry was abundantly demonstrated at «Tecnologica». The activity of the ’70 Group is usually associated with visual and technological poetry. (The group was founded officially in 1963-64 during the «Art and Communication» and «Art and Technology» conferences held in Florence) and the analytical work assigned to magazines like «Dopotutto», «Linea Sud», «Civiltà delle machine», «Nuova presenza», «Il portico», «Lineastruttura», «Ex», «Lotta Poetica», through such common ideas as irony, objections and criticisms of the culture of images and the inversion of slogans. In this sense, Tommaso Binga’s experience is exemplary: his career is filled with the passionate osmosis of poetry, painting and performance and at times it unhinges false stereotypes by restyling words that are stripped and then re-decked – arrows often tipped in desecrating irony. His «Dattilocodici» are overlapping linguistic signs condensed into new ideographic views labelled as «inaugural» (1970s-80s). The contribution of words to the visual arts became popular but the climate of interconnection and barrier-breaking amongst artistic mediums preferred a different course during the 1960s and 70s and artists like Baruchello, Novelli, Rotella, di Bello, Patella and Parmiggiani did not hesitate to partake. Poetry also encountered critique during that time as well. Examples of this can be seen with the works of Cesare Vivaldi, Edoardo Sanguineti and (above all) Emilio Villa[5]. 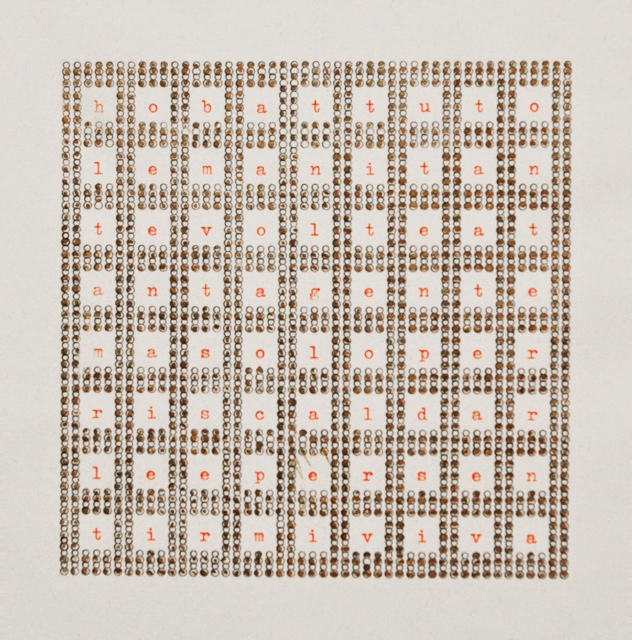 A series of exhibits over the years reveal the constant presence of these artistic trends: «La scrittura [Writing]» in 1976 curated by Menna, Mussa and Pignotti, «La forma della scrittura [The shape of writing, Bologna 1977], «Le stanze d’Agorà [The rooms of the Agorà]», Genoa 1991. 1993 was the year of the «Fiuggi poesia 1993» exhibition curated by Franco Falasca which presented the relationship between poetry and the contribution of electronic elements. The «Viaggio al termine della parola [Journey to the end of the word] exhibition curated by Antonello Tolve was hosted in Salerno’s Galleria Tiziana Di Caro from 17 May to 1 August 2014. Lastly, The Donnaregina Foundation for contemporary arts in Naples presented a reconstruction of the parable of visual poetry called «La scrittura visuale/La parola totale [Visual writing, The total word]» as part of the larger Progetto XXI programme which hosted art exhibits and encounters curated by Giuseppe Morra and open to the public  from September 2014 to January 2015.