Balarm by Alessandro Librio is one of the most interesting works among the emergent talents included in «Artisti di Sicilia. Da Pirandello a Iudice (Artists from Sicily. From Pirandello to Iudice)» the exhibition curated by Vittorio Sgarbi currently on display at the former Favignana and Formica Islands Florio Almadraba Factory and scheduled to tour several Italian cities. The exhibit gathers about 200 works created by prominent exponents of 20th century Sicilian art such as Fausto Pirandello, Carla Accardi and Renato Guttuso without overlooking emerging talented artists like Alessandro Librio. 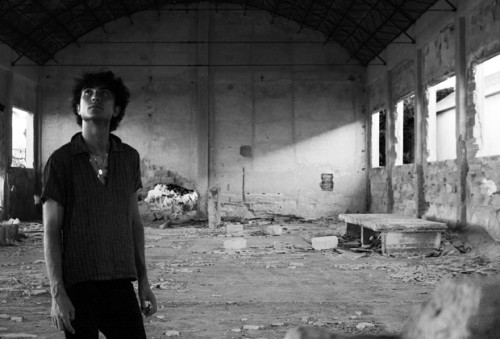 Born in Erice (province of Trapani) in 1982, the gifted Sicilian artist Alessandro Librio has focused his experimentation on audio-visual research by creating video installations whose sound and performance qualities are the absolute protagonists. He began studying music as a child (violin, piano and composition) and graduated from the Vincenzo Bellini Conservatory in Palermo with a specialization in violin. He has studied with Giuseppe Gaccetta in Genoa, Zoya Nademliska in Marsala and with Francesco Peverini in Rome and  specialized in viola with Renato D’Anna. Librio is passionately dedicated to electronic music and theatre. In 2005, he founded the 38th Parallelo,   an artistic union which focuses on video art as well as avant garde music and theatre. Librio has collaborated with great masters from the international artistic scene such as Patti Smith, Michael Moore, David Murray, Wim Wenders and many more. This brief excursus on his training and his debut made it possible to delineate the multi-disciplinary approach Librio has towards art, characterized by a modus operandi in which the work is a total work of art. Artist, musician, composer and performer, Librio brings a fundamental role to each of these aspects and the audio-visual element is the leitmotif of his latest installations like Balarm. The video installation in question reveals this artist-performer-musician in flight on a paraglider accompanied by a violin, which is offered to the wind as more than just a musical instrument. Through this evocative operation capable of illustrating the spontaneous reactions that came about on Mount Grifone and the mutual incitement between the musical instrument (violin) and the natural element (wind), Librio takes on the role of engine for the encounter between the wind and the violin by simply directing the latter.

Balarm is part of a series of works in which the artist examines the theme of the ecosystem and its safeguard from his own particular viewpoint, characterized by the presence of natural elements introduced as authentic «devices for the works» themselves. Such works arise from a profound tie to nature and use audio-visual  idioms in an updated manner that is also sensitive to older methods while maintaining today’s connection between art and nature. Balarm, as the artist points out, «is part of a series of installations that are linked to nature in a certain way. As a random and uncontrollable element (like the wind in Sicily) that coexists and activates the organizational part (identified as the violin) which, in this case, loses its traditional role to become nothing more than an elastic body that produces a sound. The sound is neither that of the wind nor that of a violin. When I work, I imagine an invisible aerial architecture that can be called sound, but vibration would actually be a more accurate definition».

The artist’s upcoming projects include La Trilogia su Palermo (The Trilogy on Palermo) created partially at the 54th Venice Art Biennale and will conclude in New York by 2016 and Music for the Queen, a particularly fascinating installation that includes the presence of a grand piano being “played” by thousands of free black bees to be created in London within the year.

Ciro Fundarò. «Everyone Is an Immigrant»