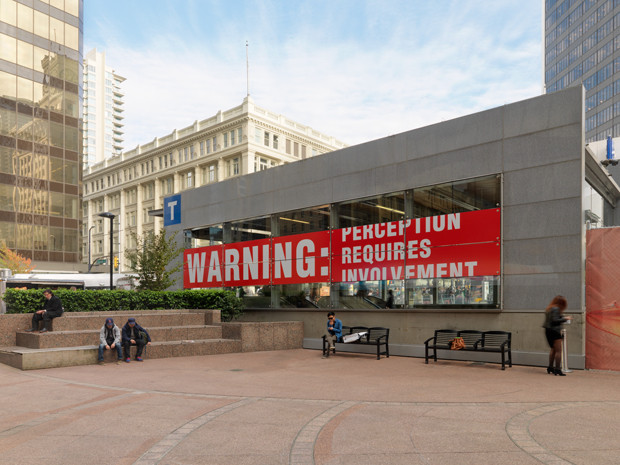 The broad-ranged cultural operations of Antoni Muntadas have led to an interest that is strongly aimed at Language: in the way it is generated into social dynamics and how it is transformed by them as well as how it evolves into other types of conventional signs, such as money, maps, colours, electronic icons and anything generated – in terms of linguistic codes – in the media dimension we inhabit.

The elaborate Entre/Between project, for its last day on display at the Vancouver Art Gallery, rethinks the Spanish artist’s entire career with a live, contemporary formula featuring his key works with the goal of becoming an ulterior linguistic device and a macro-processer of semantic decoding. His works are constructions of methodologies in which videos, performances, photographs, multi-media installations, net art, publishing projects and much more are «possible appearances». It is as if these were traces of a process and a provocation for observers who are now removed from their media alienation and involved in the linguistic decoding into a role – that of spectator –  without which the work itself would have no sense. 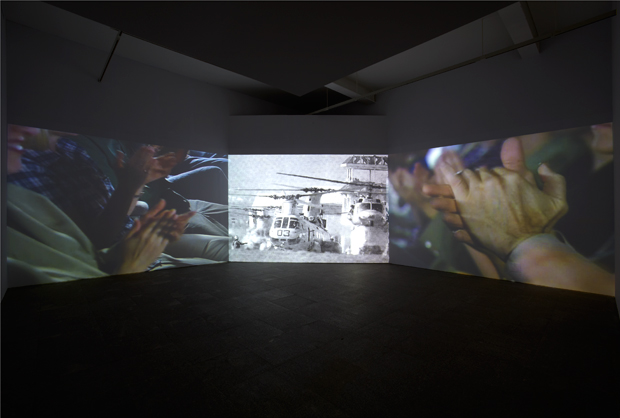 Entre/Between was first hosted at Madrid’s Reina Sofia National Art Museum, then at the Jeu de Paume Foundation in Paris and is now closing the third phase of this vital cycle at the Vancouver Art Gallery. Here, Daina Augaitis, curator and supervisor of the entire project in the three venues, became familiar with the work of Muntadas in Vancouver during the 1970s, and following the evolution of his work through time. Forty years of artistic quest, life experience and collaborations with professionals from all backgrounds are orchestrated in an installation presented in its entirety as an “open work” (Eco) although the same could be said of every single production by Muntadas.

Entre/Between became an ulterior externalization of the artist’s method and took the form of a meta-project. The leitmotiv dictated by the title entre/between is the thematic macro-structure around which the variable and permanent features of his work revolve and interact. When combined in different ways, they offer interpretations that are always new and fresh. In this way, interposing elements becomes visible or at least deducible. Anything standing between public and private, work and audience, curator and artist or work and museum makes it possible for that «possible field» – an in between space generated by the superimposition of society, art and communication – to emerge. 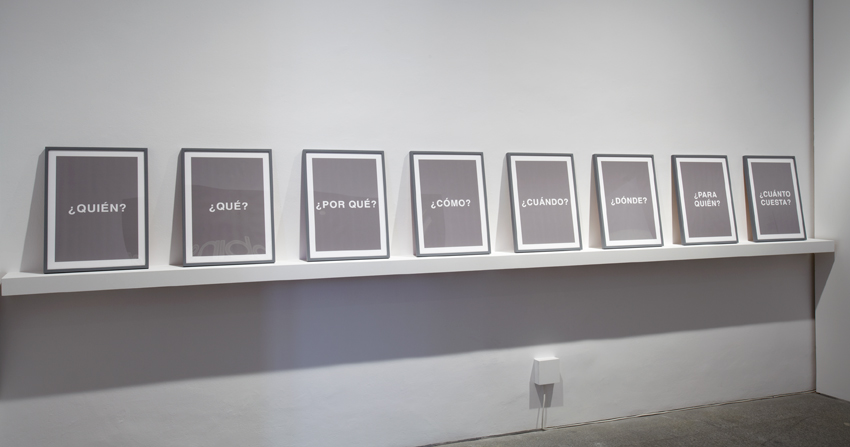 The projects for Entre/Between are arranged in «Constellations», territories that take shape from thematic configurations melted into a non-linear hypertext narrative. Each grouping includes the coupling of pioneer works with more contemporary ones. As the curator states in the exhibit catalogue: «Constellations as a non-linear way-finding tool to navigate the works of a prolific career». The public/private space articulates the theme of the «Microscapes» constellation which from the Subsensory Experiences: actions and activities series (1971-73) takes off for a sensorial decoding of signs through the body to finally arrive at Mirar Ver Percebir (2009) in which lamps shining on words linked to perception call their meanings into question with visual associations, the types of lamps used and their positions, evoking police interrogations (especially for those more familiar with cinematic idiom). It is in this constellation that artist and curator decided to locate Arte-Vida (1974). This is a manifesto of an attitude generated from the conviction of the interchangeability of «art» and «life» that guides all of his work.

Mediascapes, a definition he coined in the 1970s to describe landscapes that are more and more defined by mass-media, and here placed in the homonymous constellation, are «portrayed» through the deconstruction of the linguistic icons, such as those controlling news and advertising. Conventional signs of power – media objects, archetypical architecture and hand gestures – define «Sphere of Power» while «Communal Spaces»  works bring to light the nature of public space in an urban context. «Places of Spectacle» take into consideration works departing from structures created for public performances to contextualize ancient and modern ritual codes. Key works of his prolific On Translation series (which has been a work in progress since 1994) are included in his «Field of Translation» and featured in On Translation: The Internet Project (1997) in which a sentence translated into 23 languages is inevitably lost in translation. Life in the border areas where economical disparities between one country and another are more obvious is what gathers the works in «Domain of Fear». «The Archive» analyses the architectural and linguistic dynamics of the archive as displayed in his popular File Room: Archive of Censorship (1994-), an open and accessible archive of censorship cases, that points out the spatial and collaborative potentials of the Internet in the very year that it was beginning to become an accessible tool. «System of Art» is a collection of works that boldly calls the hierarchy of art and the politicization of museums and the market into question while «Exposiciòn/Exhibition» concentrates on «linguistically» analyzing his installation devices. 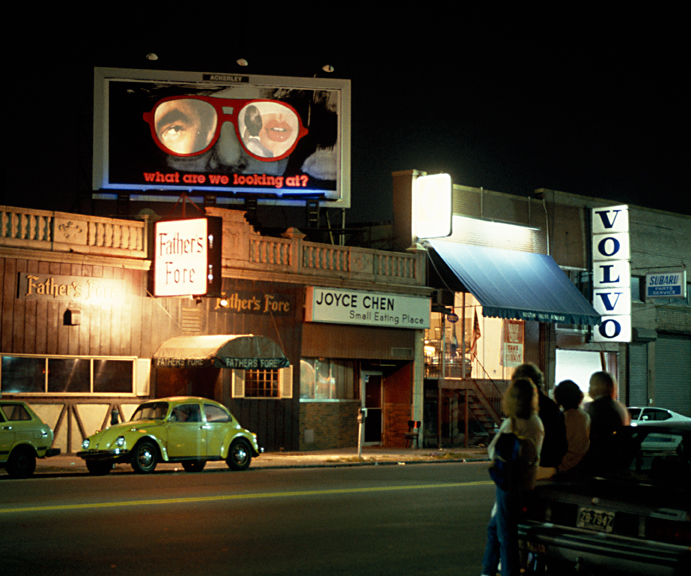 Lastly, everything is returned to its completion; microcosm and macrocosm find a common ground in their interchangeability. It comes as no surprise that Ciudad Museo is featured in «Communal Spaces» rather that in «Exposiciòn/Exhibition», despite the urban theme is framed within a clear reference to the space exhibition defined in the white cube, or About Academia outside the «Sphere of Power», even though the relationship between production and knowledge or politics and economic power is a statement that is also very important to the work. It also comes as no surprise that his On Translation series is also present, displaying a variety of works, in almost every constellation. Thus, assigning the works to the respective constellations triggers, in a linguistic play, a process of association that brings at the forefront one of the many themes coexisting in one work. The result being that one can clearly see how everything moves together in an overall crossing. As a whole, Entre/Between is a linguistic decoding that opens onto a «meta-methodology» deconstructed into main themes – to make the topics understandable – and reconstructed in a different association and relationship that the space «in between» makes possible.

We can imagine Entre/Between as a single «Mediascape» in which each constellation is legitimized to appear in the spotlight and to incorporate all the other pieces as well as to flow into them. Entre/Between is also a one «Archive» in the same way that the intentions of his projects are specifically directed to the issue of a live and dynamic archive. Why not imagine it as a single, large book? Publishing projects, in the form of an independent project or catalogue accompanying the exhibits, have always been present in Muntadas’ works as active agents of the decoding process, starting right with sensorial experiences like the ones to be found in his Poema Táctil (1972), a book that is meant to be «read» through touch experience. 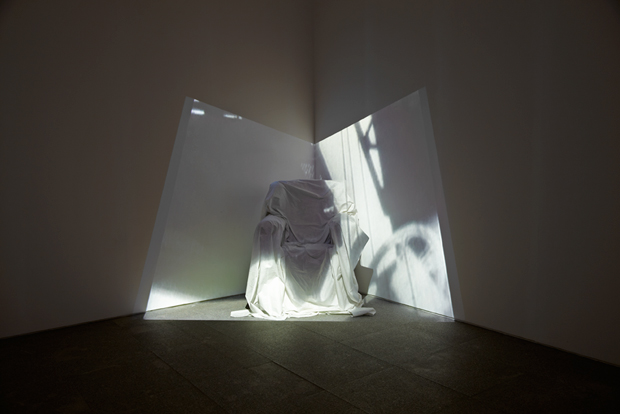 We can understand how all of this is possible as soon as we are able to acquire some kind of command of these «linguistic tools» which the artist provides us with to remove the media’s foil and visualize the space in between, the «possible field». This also means regaining that the «lost interval (intervallo perduto)» which artist, critic and illuminated thinker Gillo Dorfles had begun to reflect upon in the early 1980s in his essay Intervallo Perduto to indicate the space of reflection substituted by the rhythm dictated by the «hypertrophic signs». This flourishing production, along with that to come, is ready to live in future semantic compositions, recombined and decoded by the actors called into play, including the audience whose role is very important in any of his works.

Muntadas: Entre/Between is organized by the Museo Nacional Centro de Arte Reina Sofía, in collaboration with the Vancouver Art Gallery and curated by Daina Augaitis, Chief Curator/Associate Director. The exhibition toured at Reina Sofia Museum (Madrid, November 2011 -March 2012), at Jeu The Paume Foundation (Paris, January-February 2014), and today ends its third cicle at the Vancouver Art Gallery where his work had its first public attention in the Seventies.