In the world of science, the asterisk, with its star-like shape, implies a link; if we place the sign between the terms art and science, the resulting cultural combination is a new territory for exploration and research. And so a new star is born (it could be a supernova) which illuminates two universes: the arts and the sciences. Into this new territory – unknown, or rather, hybrid – where entwinements, convergences and plurality occur, comes art*Science 2017, to mark the anniversary of Leonardo, the journal published by MIT Press and the most authoritative resource on the relations between art and science, 50 years old this year. Art*Science2017 took place from 3rd to 5th July in Bologna. An idea by Pier Luigi Capucci, Noema’s Director, and by the Cultural Association La Comunicazione Diffusa, was the starting point for a conference on the relationship between art forms and scientific disciplines. The theme of this initial event was The New and History, in other words the relationship between two seemingly opposing concepts which nevertheless can and must live together. The “new” or “innovation” is rooted in the past, in history, but can and must re-launch its legacy into the future, update it, give it renewed functions through the disciplines of science and technology. What is the meaning of new, what is innovation, what does History mean to us today, and how can science and art come together in the complexity of contemporary life? Art*Science 2017 was also an opportunity for encounters and exchange between participants with the mailing list Yasmin – backed by UNESCO, Leonardo and Noema – on the interplay between art and science, which includes academics, artists, scientists, teachers and professionals throughout the Mediterranean basin. 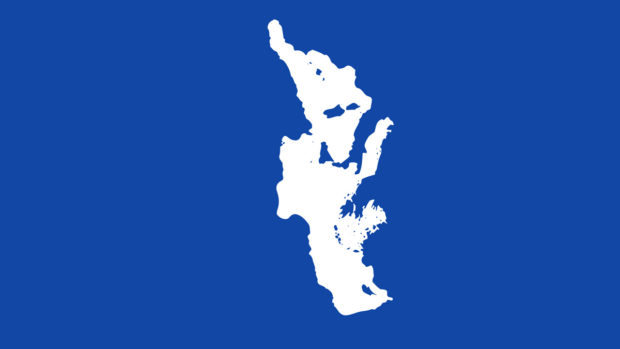 During the conference, an attempt was made to reflect and reason on the New, and also on Leonardo’s next 50 years. Introducing the theme was Roger Malina (Executive Editor of Leonardo Publications), who invited us to re-imagine the future of science in collaboration with the arts through the construction of a kind of collaborative platform. He was followed by Nina Czegledy, who addressed the role of a new generation of artists and scientists willing to work together. The territory constructed over the three days began with the opening show BIT (o del terzo incomodo), a version of a play by Eugène Ionesco: Délire à deux, in a translation by Barbara Dondi – approved by the author – and directed by Michele Orsi Bandini. This is an experiment in “inter-connective theatre”, in which the roles of actor and spectator are reversed and the stage assumes directorship of the show. A fascinating challenge in openness to digital communication, a stage within a stage where theatre blends with constant reflections on the everyday use of devices and their degree of pervasion.
The journey of Art*Science 2017/Leonardo 50 was a long one, from Michele Emmer and his soap bubbles containing the fascinating architecture of mathematics and aesthetics, followed by Silvia Casini, who studies “cerebral visualisations” using innovative scanner technologies in order to analyse and work alongside artists on the endlessly complex and fascinating “grey matter” we call the brain. Roberta Buiani, meanwhile, gave us back the sense of empty and full, of dust and experimentation through objects (in this case, wardrobes and glass display cases) which are abandoned in scientific institutions and laboratories, recounting the experience of an art project at Toronto University called The Cabinet Project. 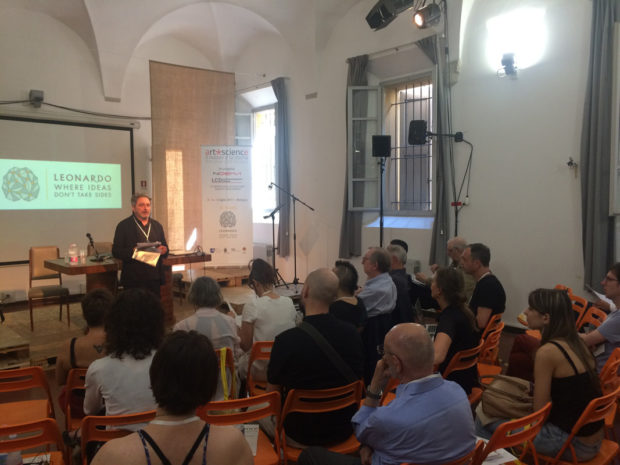 Other contributions circumnavigated the marriage of the arts and the sciences with European projects such as Scienar: Scientific scenarios and art, coordinated by the University of Calabria and brought to us by Marcella Giulia Lorenzi. Also featured were Bill Seaman’s creative computational investigations into languages, and the “transgenic” hybrids collected by Mario Savini in a rethinking not only of art forms but also of art behaviours, skilfully reorganised in an ecological vision by Judith Van der Elst with the concept of Greeness and new spatial ontologies. The first part of the session concludes with the interesting round-table BIT: interconnected Heresy, together with anthropologist Giovanni Azzaroni, actress and translator of the pièce Barbara Dondi, and Director Michele Orsi Bandini. Into this new connection and con-fusion, Francesco Monico projected a contemporary narcissistic vision in which future and past are unreal, while Charitos Demitris found a tool for research and experimentation in virtual reality. 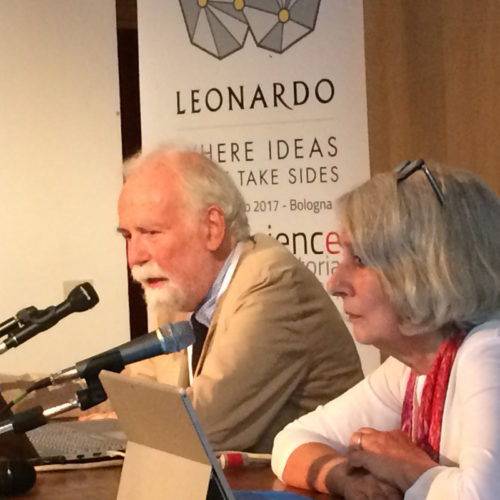 Essential too is the link between music and science, addressed by the very young Sonia Cannas, who highlighted the mysterious and increasingly intimate relationship of divine proportion and aural rapport that constitutes the symphony, heading towards new compositional strategies, while Elena Cologni – in a direct video link from Cambridge – spoke of space and living as the driving force of reflection between the arts and the sciences. At the same time, a valuable feature within Art*Science 2017 was the Festival of Complexity, coordinated by Simonetta Simoni, which was able to hold the complicated weave of art, theatre, music and science with the participation of Giovanni Chessa and Liliana Stracuzzi and their explorations of complex listening in contemporary music. Stella Saladino illustrated her experience of digital direction of the show BIT (o del terzo incomodo) and discussed how theatre and new technologies can coexist, while Pier Luigi Capucci himself spoke about the complexity of life and the new forms existing (the Third Life) in an increasingly hybrid territory. Piero Dominici, meanwhile, turned the focus on the urgent need for education about complexity. Lastly, there was time for an overview of the most important European centres involved in the fusion of art and science, starting with the international conference on Generative Art promoted by Celestino Soddu and Enrica Colabella, and continuing with the virtual projects of Bologna’s Cineca with Antonella Guidazzoli. Cinema too – with the Polly Maggoo association, founded by Serge Dentin – anticipates a new hybrid dimension between art and science for visual and experimental narrative, as does the project Pépinières européennes pour jeunes artistes, in which Franco Torriani proposes an incredible encounter of social mobility, artistic creativity and scientific exchange. In conclusion, Jadwiga Charzynska, director of the Laznia Centre for Contemporary Arts in Gdańsk, presented her testimony of encounters and exhibitions in the venue that has hosted artists of the calibre of Stelarc, Bill Vorn, Ken Feingold, Guy Ben-Ary and many more. The first part of the event closed with a reflection on ‘past-present’ by Gabriele Falciasecca, President of the Gugliemo Marconi Foundation in Bologna, and precious partner of art*Science2017. 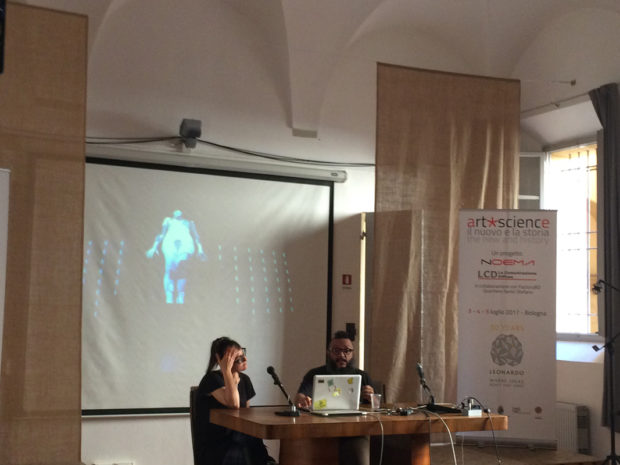 To conclude the three-day event, Salvatore Iaconesi and Oriana Persico’s AOS (Art is Open Source) presented its new project Kernos: a map of the subjects, locations, themes and relations between the arts and sciences in the Mediterranean basin; thus stimulating a participatory reflection on the essence, meaning, values, forms and differences in actions involving the arts and sciences in the region. The extraordinary experience and journey of Art*Science 2017/Leonardo 50 ended with a performance by AOS, created for the occasion and entitled Accelerator: a meditative and poetic experience for those who took part. While particles are observed in an accelerator, their effects come out of the research laboratory, accelerating the transformation of people’s perception of their universe. Individuals thus become particles in a planetary accelerator, receiving stimuli and signals (information on scientific results), moving (thinking and communicating), colliding (arguing) and turning into other entities (transforming cultures, awareness, and visions for their future). Accelerator concerns this very process, in a marvellous concert of science, society and its acceleration. 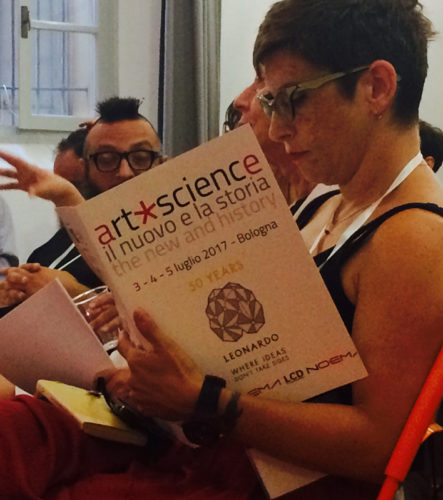 In this phase of acceleration, the New appears to have been renewed and innovated behind a series of questions, inputs, comparisons and clashes. It’s not a simple matter to narrate the future through the newness of history; in fact it’s complicated and – precisely because this challenge contains divergences, “transvergences” and corporeal transitions – it’s worth being part of it. Art*Science 2017 was undoubtedly an excellent observatory from which to contemplate the stars, calculate their energy and – why not – write a lovely poem about them. Underneath it all, we’re all made of the same stardust as everything is. In this sense, trans-disciplinary action can help us to understand and stimulate these “generative”, “molecular”, “particular” and, above all, collaborative cross-references. We began with the asterisk that links, and we can only finish under the stars; the stars above us and the relationships inside us which feed on themselves in order to illuminate hidden territories, cast into shadow for too long and now exploding in a blast of universal energy. With its vast cultural heritage, Italy must surely be fertile ground for fusions and constellations made of narration, imagination, bodies, reflections, comparisons, complexity and knowledge, so that the arts and the sciences can at last dance in a new space (in the beauty of the world) and complement each other in order to live and inhabit a new story.

Giorgio Cipolletta is a trans-disciplinary artist and media theorist. In 2012 he completed a PhD in Information and Communication Theory. He is currently an adjunct professor of Visual Art and Technology at the University of Macerata. He is a member of the media editorial staff of Noema / mediaversi / Riviste di Scienze sociali. He works as a freelance layout artist for the University Press of Macerata (EUM). He has published in numerous academic journals (Flusser Studies, Heteroglossia) and his first book is Metrobodily passages. For an aesthetics of transition, EUM, Macerata 2014. He has won several international poetry competitions and has participated in national exhibitions with multimedia installations and performances (Corpus 2012, Chaos 2013, Bookquake 2017). Since 2014 Giorgio has been a founding partner and vice-president of Crash (Creative Art Shocking).