... Under the Lens of Virtual Reality.

Artworks “in the age of their digital reproduction” seem destined to be enjoyed in an increasingly immersive, absorbing and spectacular way. The dream of entering a painting, seeing the pictorial space become a reality is enticing, surprising and extremely appealing. We see this in cinema, but also in exhibitions that promise a multi-sensorial experience: multimedia spaces in which paintings come to life, where little or nothing of the original work remains, merely transformed into illuminated surfaces. 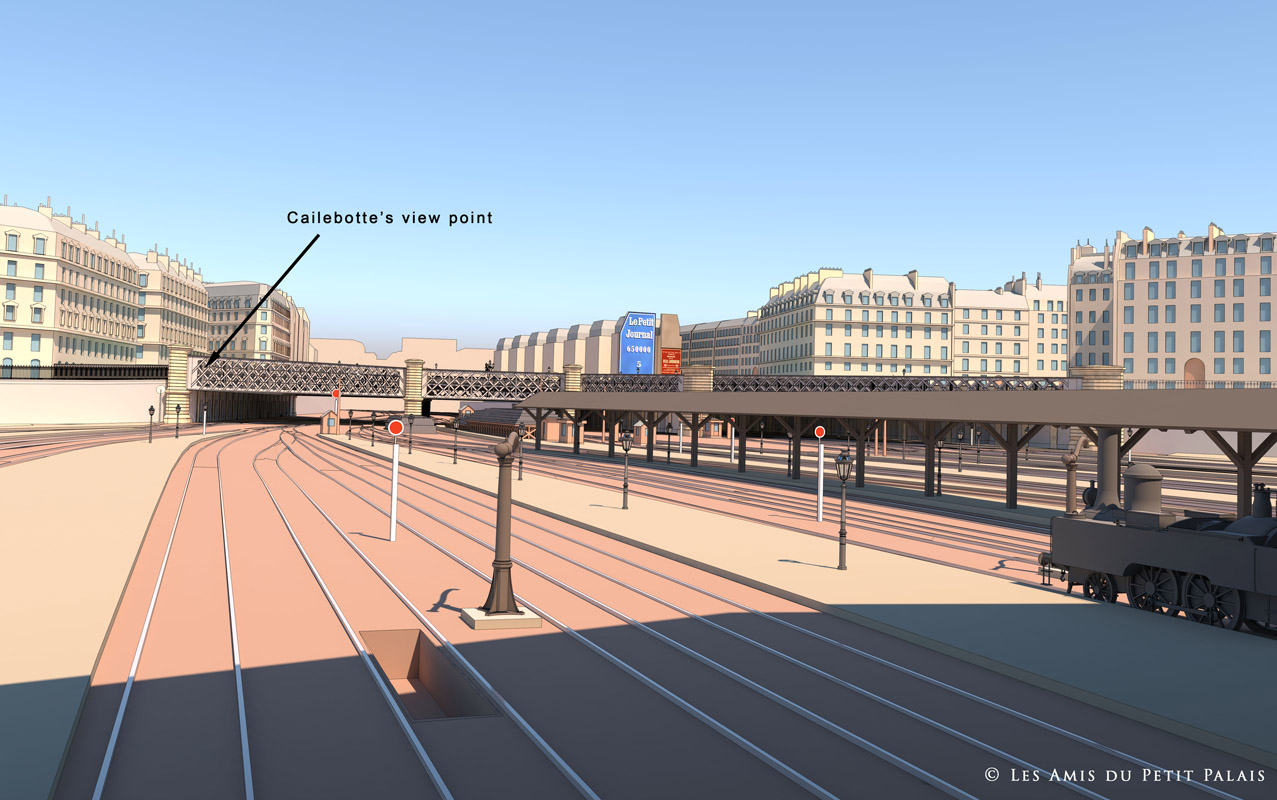 What if digital technologies were used instead to penetrate the deeper structure of a work, to understand its genesis and its content? The exhibition Impressionism in the Age of Industry: Monet, Pissaro and more, which recently concluded at the Art Gallery of Ontario in Toronto, included the painting Le Pont de l’Europe by Gustave Caillebotte, painted in 1876 and currently on loan from the Ghez collection. Tablets were made available to visitors, allowing them to access the work via an augmented reality system: when the tablet was pointed towards the painting, visitors gradually noticed that it was no longer the pictorial surface that was being framed, but its virtual reconstruction. 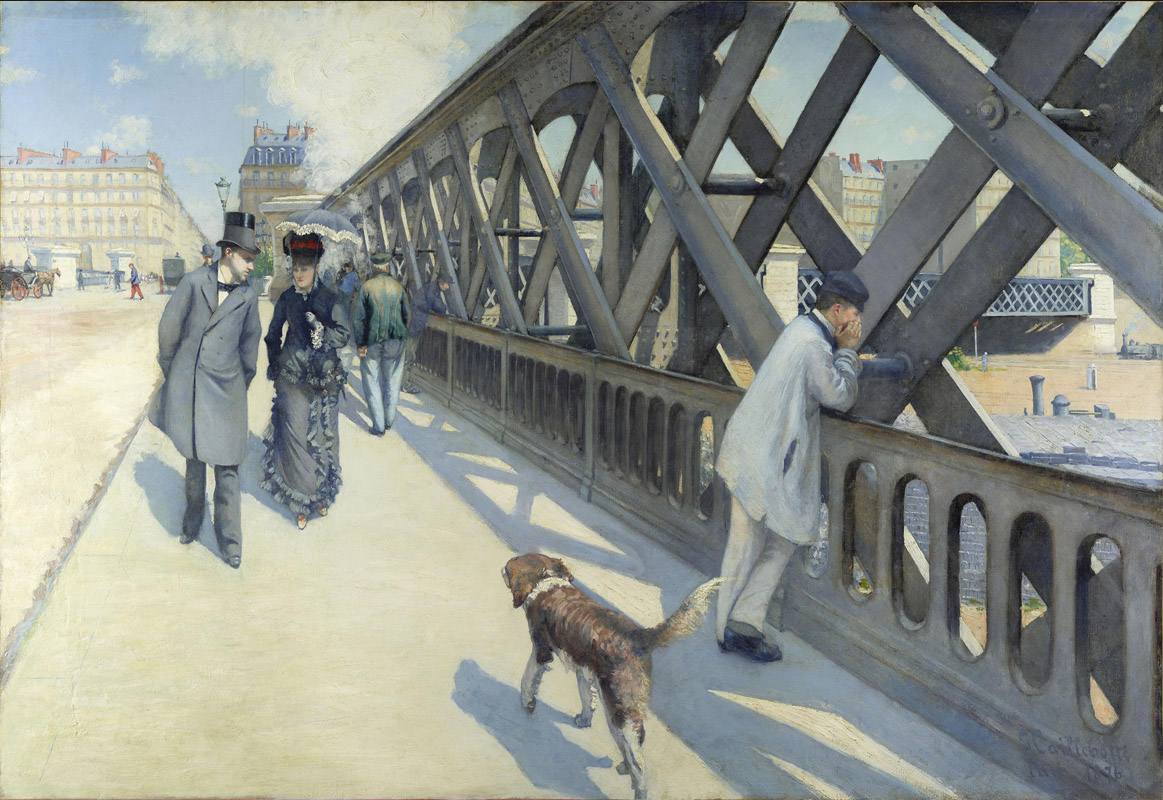 This system is the outcome of a lengthy and complex research project undertaken by neuroscientist Claude Ghez, an Emeritus Professor at Columbia University and owner of the Musée du Petit Palais in Geneva, and Pietro Galifi, the founder and artistic director – together with Alessandro Furlan and Stefano Moretti – of the production company Altair4 Multimedia. 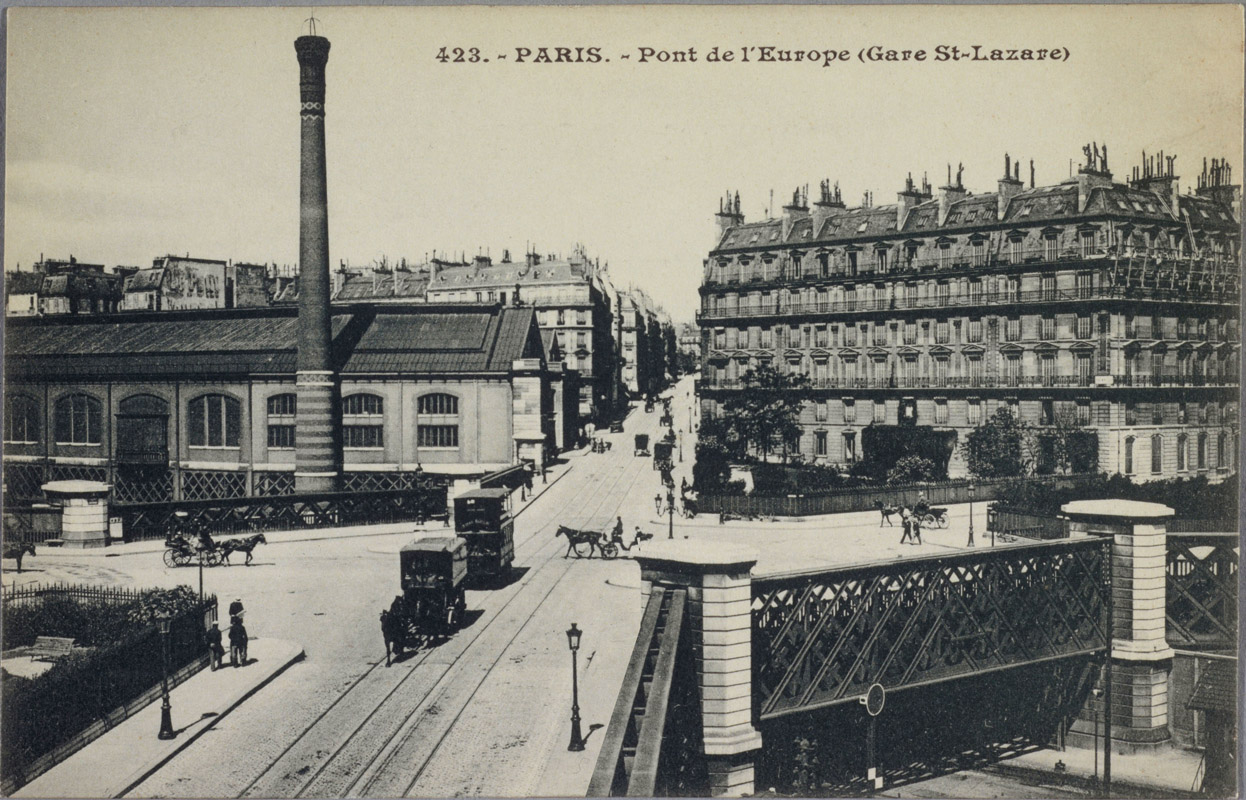 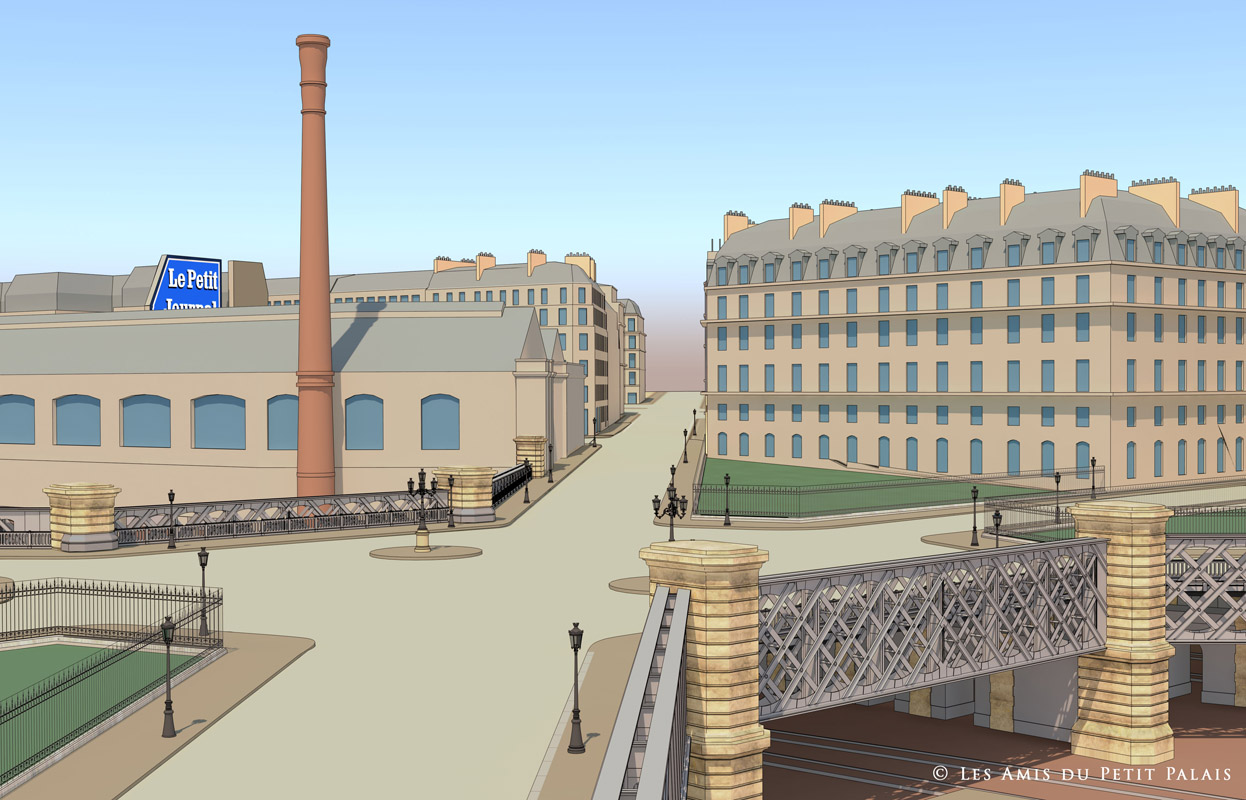 Ghez and Galifi’s research, which began in 2013,[1] emerged from the need to explore the perception of ambiguous pictorial spaces: Caillebotte chose a bridge that had just been built as his subject and depicted an urban area that was being transformed at the time – and has not ceased to change since then, appearing completely differently today. In addition, while still applying the rules of perspective, Caillebotte assembled his painting as a puzzle, merging different viewpoints: the main view is the one that looks through the iron girder, the true centrepiece of this work, with its interwoven metal structure. It is not the only viewpoint, however, if it is true that the lines guiding the spectators’ gaze are those of a central vanishing point, with the left part omitted.

The work by Ghez and Galifi started from a philological reconstruction of the painted space using photographs, archival documents and initial sketches. A detailed 3D model of the bridge and surrounding areas was developed from the data they collected and this enabled Ghez and Galifi, through relevant software, to identify the viewpoints the painter had used to make the work. The virtual reconstruction – Galifi has over thirty years of experience with the group Altair4 Multimedia – has become a tool for research and understanding, as well as an aid to enjoy and disseminate art. The research on Caillebotte has continued over the past few years right up to the augmented reality system exhibited in Toronto and the creation of a virtual reality system that allows visitors, using headsets, to immerse themselves in the space painted by Caillebotte. 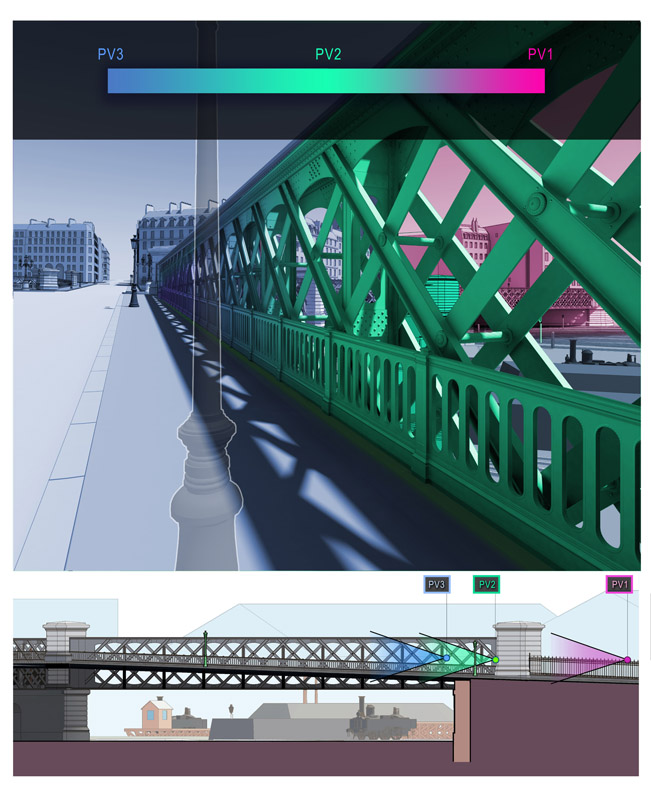 Galifi’s experience with the digital image was already present in the 1980s when, with Altair4, he participated in the first experiments using computer art in Italy, at the exact moment when IT was becoming a mass phenomenon. From that moment onwards he has taken part in and has followed the evolutions of computer graphics without ever losing sight of historical references: it is not by accident that he likes quoting Maldonado and his ideas of retracing systems of virtual representation which have existed across history. According to Galifi, virtual reality represents a revolution in the sense that it reveals the mechanisms underlying our perception, in the same way that photography did at the time of Caillebotte. «Today we are experiencing the same revolution with virtual reality» says Galifi «because we are discovering that we don’t just see the space surrounding us, but feel it with our entire body». 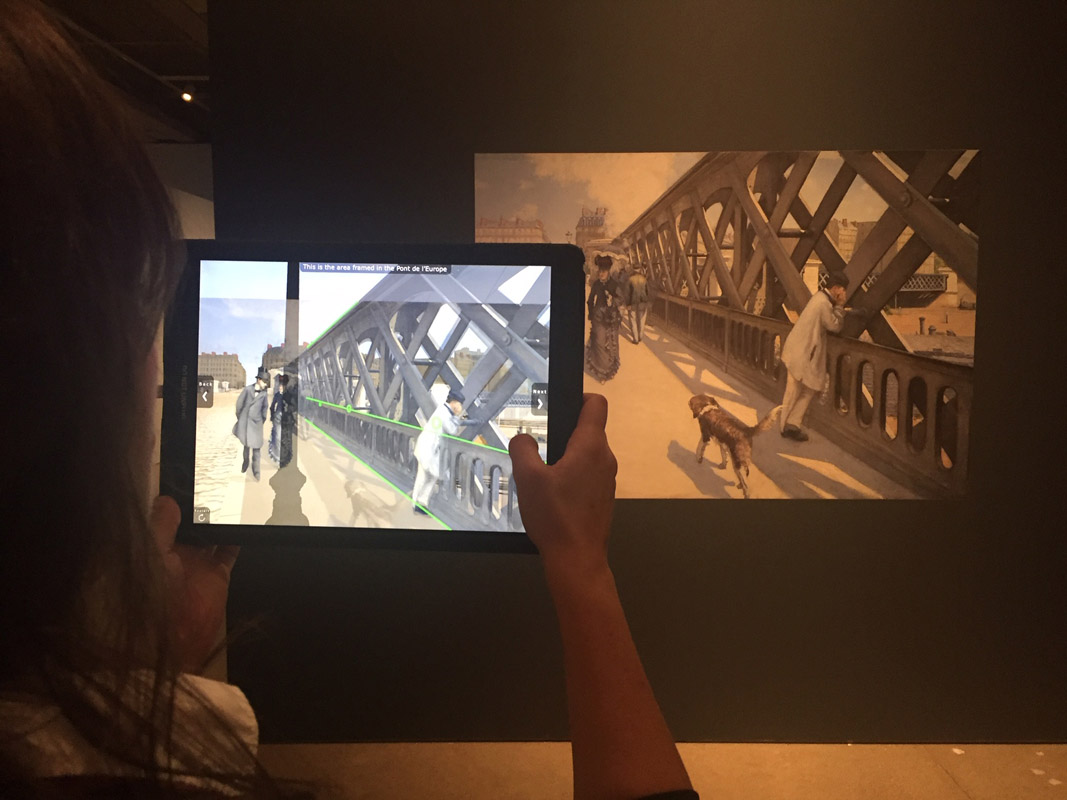 Through virtual reality systems it is possible to examine the relationship between pictorial space and real space: paintings have real locations that are virtually reconstructed. In this way Alberti’s metaphor of the window and the painting is re-enacted – from being a flat surface onto which an object is projected, it becomes the subject of the gaze that penetrates it.