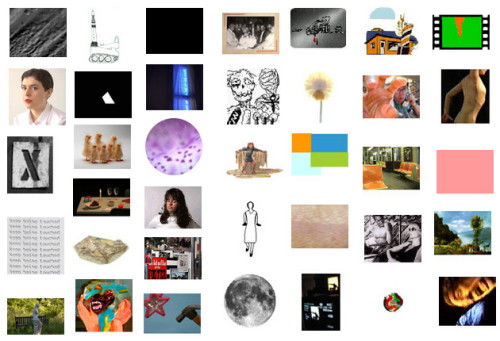 Since technology and the internet burst into society, and entered into the creative sector, some institutes, museums and foundations started to pay interest towards a new form of collecting as it is required by works of net art.

New York’s Dia Art Foundation is one of these institutions. Its web commissions began in 1995 as part of a project dedicated to aesthetic and conceptual experimentation with the new medium that was being promoted by the Dia’s Commissioning Committee.

The special collection features 36 online works that have been commissioned since 1995 to 2013. They can be viewed at www.diaart.org in the «Artists’ Web Projects» section. Some of these works have been commissioned by public funding from the New York City Department of Cultural Affairs and the New York State Council on the Arts. Exploration of the Internet medium was carried out by accentuating web art’s best love themes and its most obvious peculiarities. These very same themes are what changed the relationship between the virtual consumer and the work itself. It is now possible to have overall view of the collection of web works. It is interesting to observe how the initial experiments on the web were of a communicative level and how they are now used by other forms of media for virtual works. Photography is a good example of this kind of conceptual and technological evolution over time. 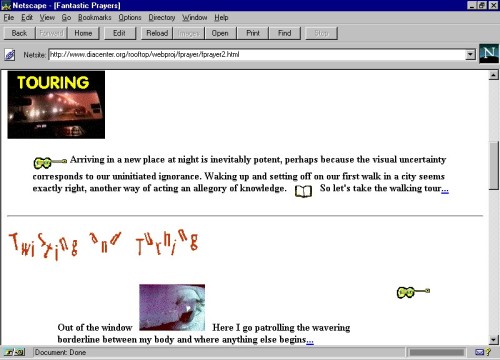 More specifically, the first commission was a piece by Tony Oursler, Constance DeJong and Stephen Vitiello entitled Fantastic Prayers which is a playful yet sorrowful discovery of the Hyperlink and its potential. The story is build on the webpage where a series of hyperlinks access other webpages containing sounds, video, texts and images that support and expand the narration borders through connection-icons recall excuisitely a low-tech dimension. Its graphics – a simple web page with text and hypertext subdivided into brief paragraphs – take us back to a technological past that we now remember with nostalgic fondness.

Of course, it was only 1995 and back then Internet and computers were astonishingly new – considered the most amazing means of communication with a wealth of narrative potential: an exciting game in which people went looking for a deeper understanding of the machine and a broader canvas for their thoughts. 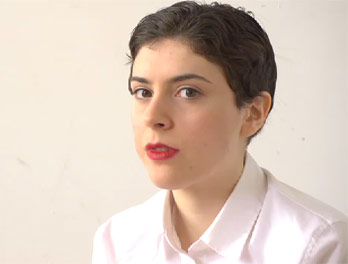 Web art gradually managed its way out of its virtual margins and was combined with other idioms as it established itself in a more concrete reality. Laylah Ali shows this to us in her John Brown Song! (2013). Internet is an agora where people can be exposed to ideas and exchange points of view. The classic John Brown’s Body marching song dedicated to abolitionist John Brown is interpreted by today’s Americans: a collaborative portrait that brings up social and political issues in a contemporary world.