by recto/verso collective
in focus, Interview

Arshake is pleased to relaunch, also in Italian, the interview by collective recto/verso  to James Bridle, writer, artist, theorician, explorer of the new aesthetics in the post-digital era, and founder of the term The New Aesthetic.

recto/verso: You coined the idea of the New Aesthetic, a result of both your academic background in Computer Science and Artificial Intelligence and your writing and artistic practice. Is it a concept which can be valid for a long time or is it rather an attempt to name what is here and now, to point out a moment which will pass rapidly?

James Bridle: The New Aesthetic was an unconsidered title for something I saw which was pervasive but had not been named: the emergence of networked processes into, for want of a better term, the “real world”. As such, it encompasses everything from digitally-manipulated images to unintentional glitches in manufacturing and information processing, to new ways of thinking, seeing, and experiencing the world in the light of new technologies. It hones in on the appreciable evidence of these things, whether that is visible aesthetics, or sensory modes, social practices, or legal ramifications. I think that the terrain it traverses has been with us for a very long time – since the birth of technology as distinct from direct human agency – but has become more evident with the development of networked technologies and digital imaging and information transmission. Thus it will be with us for a very long time. As a project, the New Aesthetic was never meant to be totalising: indeed, this is an area which is impossible to totalise. Rather, it’s an observation and an ongoing investigation. 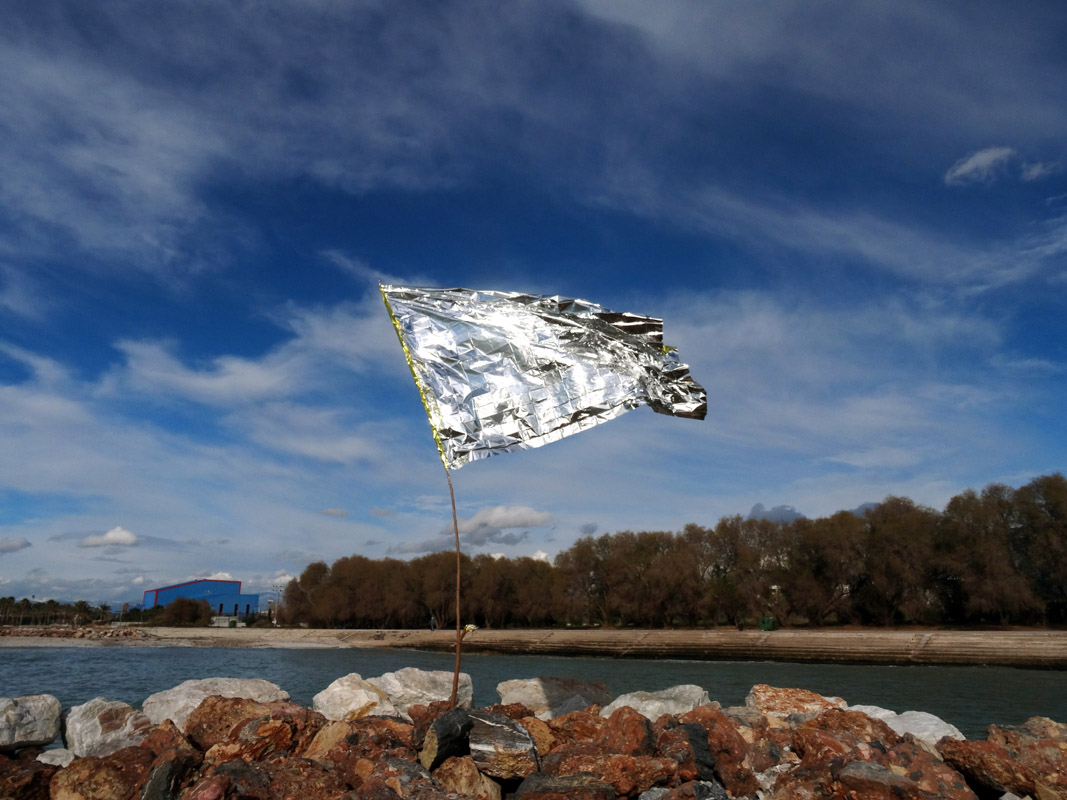 How do you incorporate this research into your body of work?

I spend a lot of my time looking at the impact of new technologies, and as you do this, you discover new stories to tell, and new affective modes to exploit. Thus my fascination with the use of holograms, whose deployment has varied as widely as Tupacs performance at Coachella, Narendra Modi’s nationalist political campaign, as well as virtual interrogators and security announcers at international borders. I repurposed the hologram to explore issues of citizenship and legal processing in Homo Sacer (2014), a commission for FACT, Liverpool, in 2014. Likewise, Seamless

Transitions (2015), a virtual tour of three sites of immigrant judgement, detention, and deportation in the UK for the Photographer’s Gallery, London, on 2015, brought together my interest in virtual architecture and 3D design with open source investigative work including flight-tracking websites and freedom of information requests. 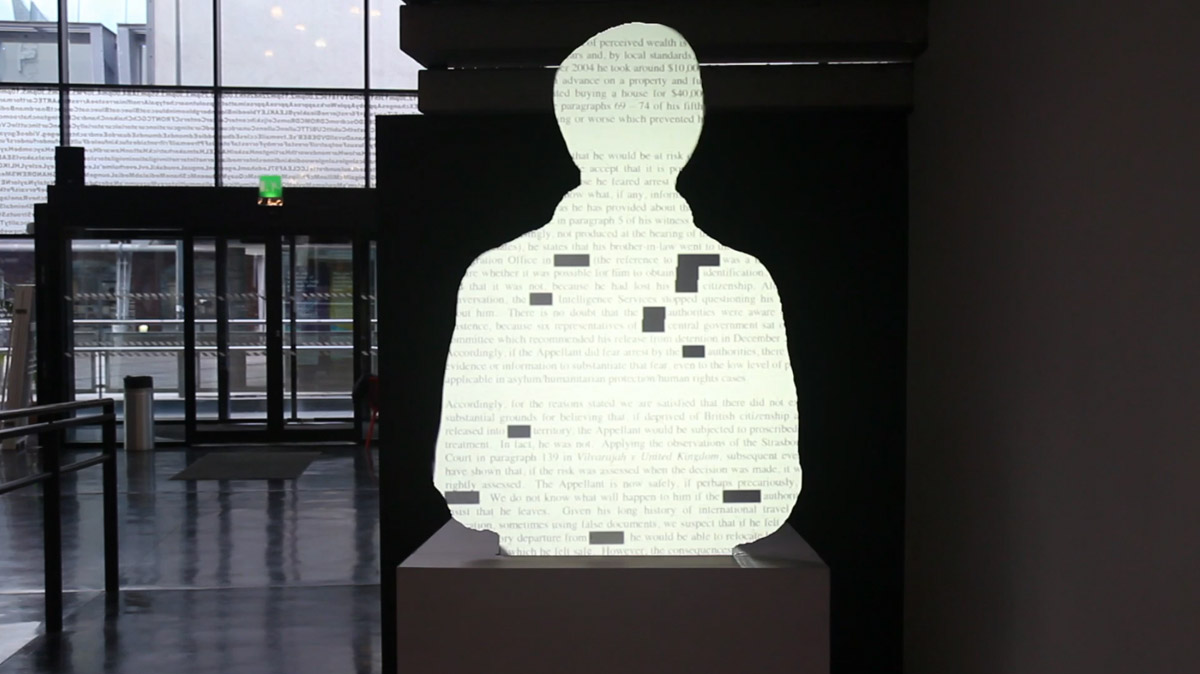 The New Aesthetic project along with your work with holograms or Drone Shadows series shed light on an important question also raised during the conference in Athens – the tendency of technology to be imperceptible. In your text Big Data, No thanks you capsulized a history of computing and a human-technology relation. Why it is important for you to make this connection between past and present?

I think it’s always important to make a historical connection to the technologies and politics which precede our current situation, for two reasons that are pertinent to the Big Data, No Thanks text. The first of these is the obvious one: that it is simply not possible to fully understand and thus act with full agency in the present without understanding the social and material histories which have produced the present moment. But the second is more interesting: the past contains many failed, under- utilised, mis-timed or misunderstood strategies which are awaiting rediscovery and review, and which may prove useful in our changed, contemporary circumstances.

In the case of Big Data, No Thanks I was particularly interested in how the long but little-known history of whistle-blowing by UK anti-nuclear activists could be compared to present-day strategies against surveillance, and how this comparison might also be used to change how we think and speak about surveillance itself. 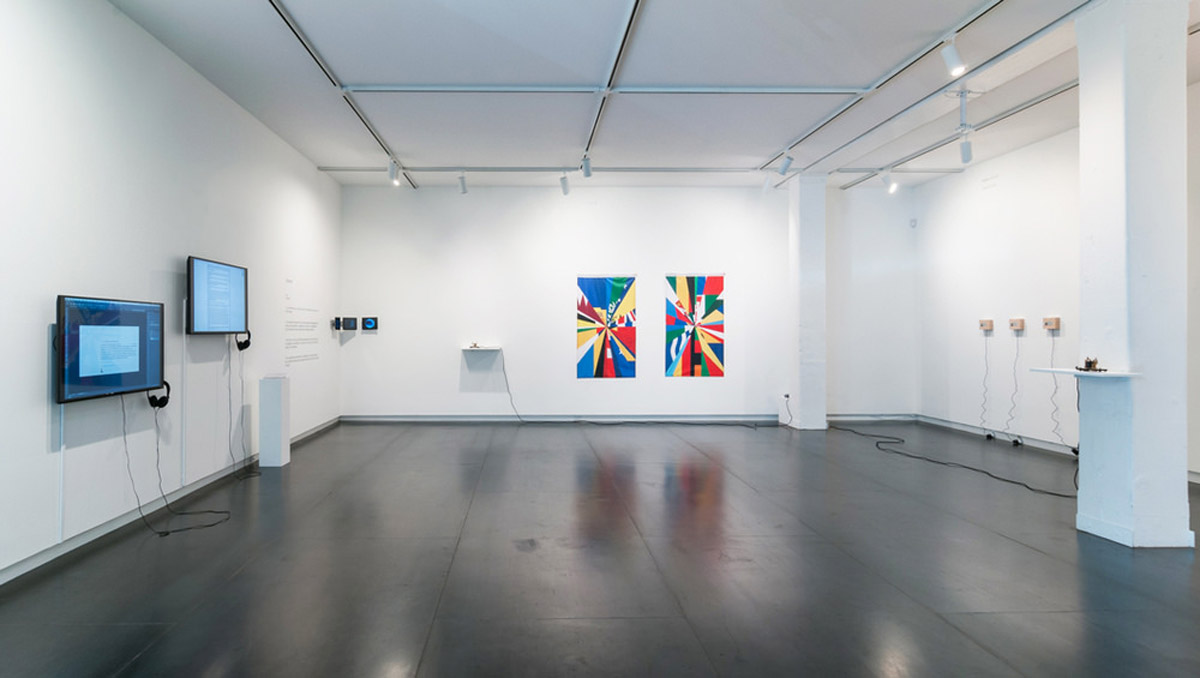 In the same text you conclude at some point that ‘the history of computing is (…) a history of obfuscation and inscrutability’. How do you position your practice in the context of this statement?

One of the roles of the artwork is to illuminate – to show the thing as it really is, in order that we may engage with it more fully. Many of my works take this direct approach: you draw the thing, or write about it, or write code around it, to understand it better and thus have agency over it, whether the “it” is a machine or a legal system, or an idea. But obfuscation and inscrutability have their uses too: art is not only about presenting better or easier answers, it is also about complicating and troubling received and simplistic ideas – not least that there are better ideas to be had. It’s about pursuing and promoting entirely different ways of looking at the situation, not simply “revealing” the situation as it really is. 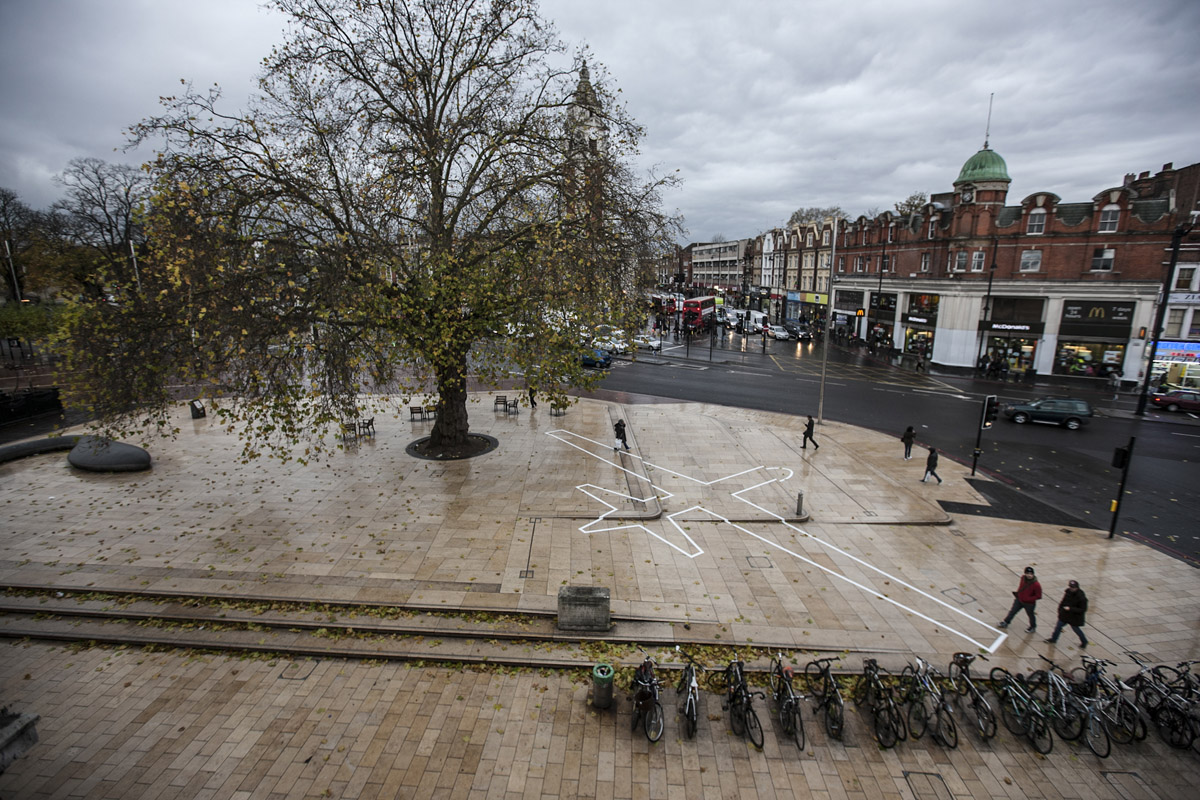 Unmasking surveillance technology, data gathering and its possible manipulation is at the core of your recent Satellite Shadow project, realized in Saint Petersburg – a unique political context. Is this how we can define the role of an artist working with digital technologies today?

I don’t think it’s how we should define the role: a digital artist can do a presumably infinite number of things and no artist is bound to do political work. But work that seeks to engage with the material conditions of the present is by its very nature going to engage with the politics that produced those conditions, and is therefore going to be political. It’s certainly what I’m interested in doing in this case, and the Satellite Shadow project led me down a fascinating route of research, exploring the uses and abuses of satellite images, which is what I hope all my work does, at least for me. 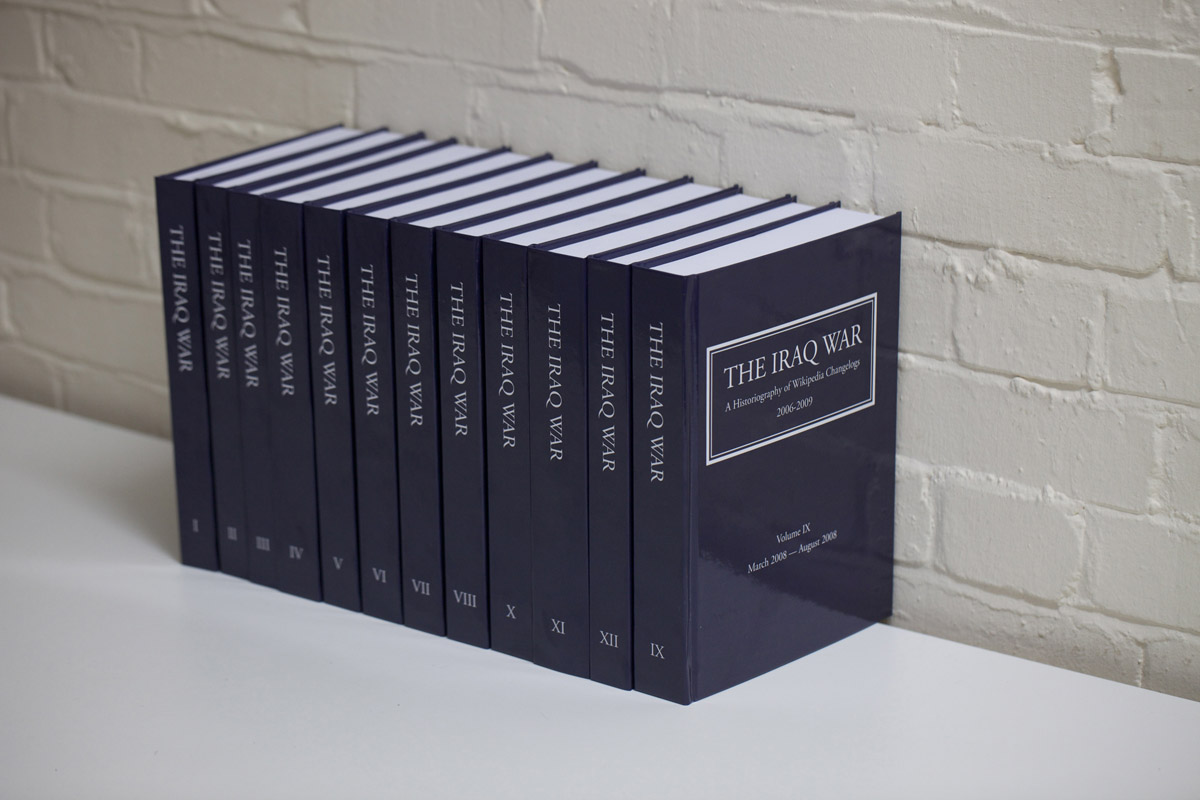 In his text Art Workers: Between Utopia and the Archive Boris Groys states that the Internet has erased the difference between the production and the exhibition of art. You have your own website and blog where we can read about all your projects. How important is being online to your artistic practice?

I might ask rather, how important is my artistic practice for being online? I’ve been online since I was 13, I don’t know any other way of being. But I think what Groys might be getting at is the erasure of the boundary between the exhibition space and the space of “real life”, which for many of us includes the Internet, not as a separate space of “online” versus “offline”, but as a completely entangled space of becoming. I was asked recently (excuse me) for my thoughts on the Whitechapel’s exhibition of digital and network-inspired art, “Electronic Superhighway”, and the best description I could come up with for this process was that “the gallery is now part of the Internet, not the other way round.” What I meant was that the gallery used to be the place you went for the finished, the complete, the definitive, and the summated; today, it can only (sometimes beautifully and brilliantly – I mean no disrespect) reflect back a tiny fraction of the activity which we know and cannot deny is occurring continuously and ecstatically elsewhere. 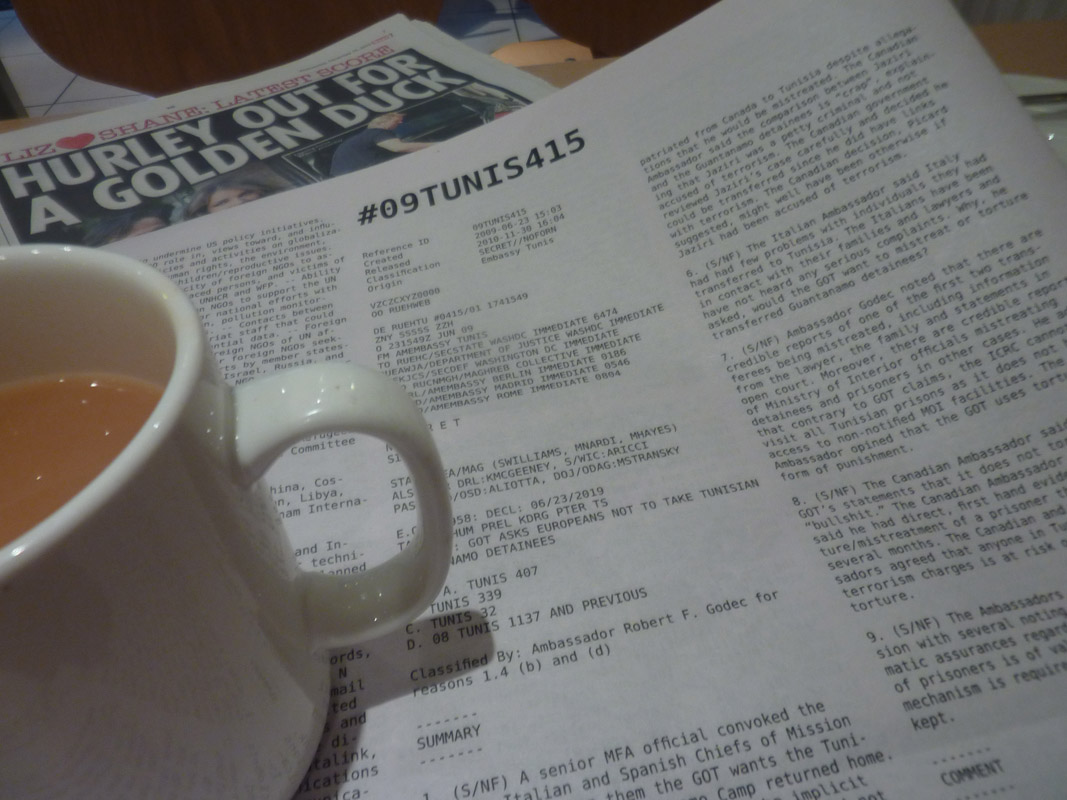 To conclude I will ask you for your definition of a hybrid word: online/offline.

I can’t put it better than Karen Barad, who has it best. In her writing and speaking, she uses that slash, the “/“, all the time,to signify not the separation of two concepts, but “an active and reiterative (intra-active) rethinking of the binary” [1] Online/offline is a false binary, and not merely a hybrid, but an intra-active process of entanglement between two ways of thinking the world – it’s right there in the slash that it gets interesting.

The interview (In Conversation with James Bridle) originally appeared on recto/verso‘s platform as part of the issue #4 of an online thematic magazines dedicated to Online/Offline, following a conference dedicated to the theme  organized in Athens by HD Kepler, two artist-run spaces 3 137 and Enterprise Projects. recto/verso is a research collective of widely understood curatorial practices aiming to broaden experiences while investigating the nature of images in contemporary society.