GAMeC – Bergamo’s Gallery of Modern and Contemporary Art is presenting «This is all so crazy, everybody seems so famous», the first solo exhibit at an Italian institute of American artist Cory Arcangel (b. Buffalo, 1978. He lives and works in New York).

Arcangel is one of the most influential artists of the New Media Generation. In fact, the Whitney Museum in New York dedicated a solo exhibition to him in 2011. His work revolves around the concept of safeguarding identity as well as digital and physical memory. His goal is to revive the importance of tradition through interest in the relationship between technology and culture, territory and innovation as well as through the appropriation and reuse of media. Arcangel’s works reflect and act within a contemporary society that is highly digitalized, adaptable and constantly changing, in which the practical value of things is destined to be lost in a short time in order to make way for new products – a duplicate of value. The artist is interested in saving technological objects from obsolescence. These objects seemed to be cutting-edge until a few years ago but now they are unused and condemned to a timelessness which is almost metaphysical and no longer accessible. Although he grew up during the technological boom – when mobile phones, videogames, computers, the Internet, and their relevant updates and upgrades were beginning their diffusion – Arcangel’s approach towards  a society of mass consumption and communication is not that of the user nor of the spectator but of the hacker who can manipulate data and bestow new meanings upon information. For instance, this kind of action can be found in his work Super Mario Clouds (2002), in which the popular game is modified: most of the architectural elements have been eliminated, leaving only clouds floating against a light blue background. In this way, importance is given to representation and pictorial space in videogames for the very first time. The artist’s message is that manipulation also means sharing: the directions and source codes to create different works are available on his website as well as in a series of publications entitled The Source. This attempt to safeguard and take action is also captured by the exhibition’s title – This Is All So Crazy, Everybody Seems So Famous – a quote from a hit song by teen pop music icon Miley Cyrus. The intense desire to have our «15 minutes of fame» – the acclamation by Andy Warhol – conceals the obsolescence inscribed in that time, so limited and shallow in comparison with incessant unfurling of the future. 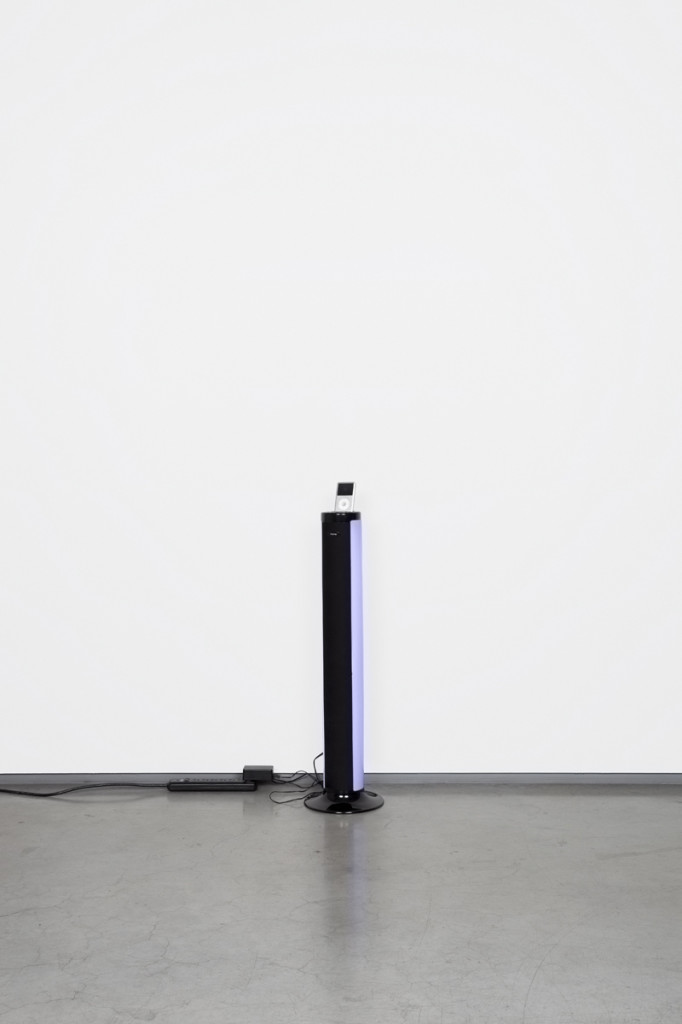 The exhibition created for GAMeC and curated by Stefano Raimondi is one of the city’s most important cultural events in preparation for EXPO 2015 along with the major retrospective exhibition devoted to Kazimir Malevich which the museum is displaying this fall. It will be held in exceptional circumstances at the Sala dei Giuristi of the Palazzo della Ragione in the heart of Upper Bergamo, the city’s political centre for centuries.

First and foremost, the exhibition project hinges on the contrast and exchange that could exist between one of the city’s most important historical buildings (Italy’s oldest municipal building whose construction began in the late 12th century) and the American artist’s ultra-contemporary installations. The space in the hall has been conceived as a large platform. The middle portion is occupied entirely by the artist’s Photoshop CS:  1060 by 2744 centimetres, 10 DPC, RGB, square pixels, default gradient «Spectrum», mousedown y=1800 x=6800, mouseup y=8800 x=20180 (2015). The piece is part of the Photoshop Gradient Demonstration series, a carpet that came into being through studies and collaboration with local companies, and traces the technical and technological processes of weaving. Until just a few years ago, weaving was one of the province’s most thriving production sectors and has undergone a process of renegotiation over time.

This work is a surface that can be walked upon measuring over 200 square metres and covers the entire floor of the room, developing into in a brilliant progression of colours to create a sounding board for the ancient fresco paintings decorating it. The piece envelops spectators completely, leading them into the «centre of the picture» – a typical Futurist concept. 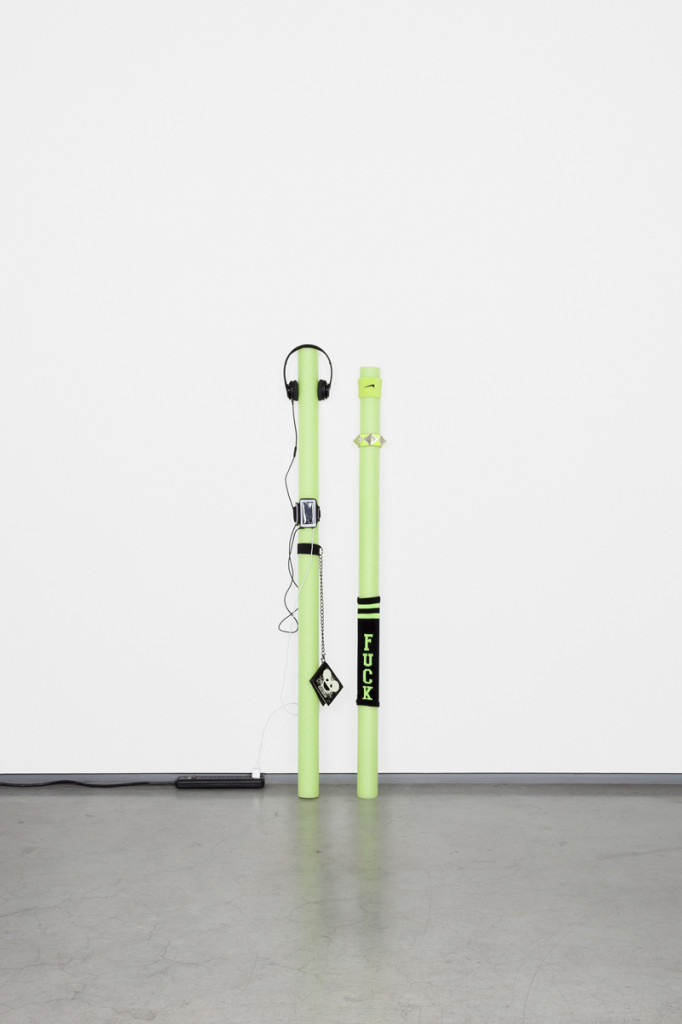 The exhibition installation then extends along the perimeter of the space, where the artist will set his works alongside the frescoes, luring spectators into applying a dual and simultaneous reading of the two levels of creation: the ancient one and the contemporary one. The carpet was made with the coloured and iridescent patterns of his pictorial works and is structured into blocks of colour. Formal aesthetics are purely conceptual since the reference is one of the gradients of Adobe Photoshop CS.

The transformation of a digital «object» into a concrete object is doubled in the exhibition created for GAMeC. In addition to this work Arcangel has conceived a silk scarf available in a limited edition (100 pieces) with the “Russell’s Rainbow” gradient used to create a carpet displayed during the exhibition hosted at the HEART Herning Museum of Contemporary Art: a multiple which further illustrates Arcangel’s trans-media practice. Among the works presented for the exhibition, the most recent ones are part of the Screen-Agers, Tall Boys, and Whales series and the Lakes series. Two other works are on display from Arcangel’s earlier works dating back to the first years of the 2000 -2010 decade which introduced modifications to the Nintendo video game consoles: Super Mario Clouds (2002- ), and Totally Fucked (2003), both presented here on period specific CRT monitors. These works offer a nearly complete comprehensive view of Cory Arcangel’s creative idiom over the last 15 years.

The Screen-Agers, Tall Boys, and Whales series (2011-2015) reflects upon contemporary worldliness with a touch of nostalgia: long plastic tubes used as pool noodles are transformed into characters (the short-lived icons of our here and now) and primped up with necklaces, electronic must-haves and designer clothes; music and beer bottles randomly positioned around the room. 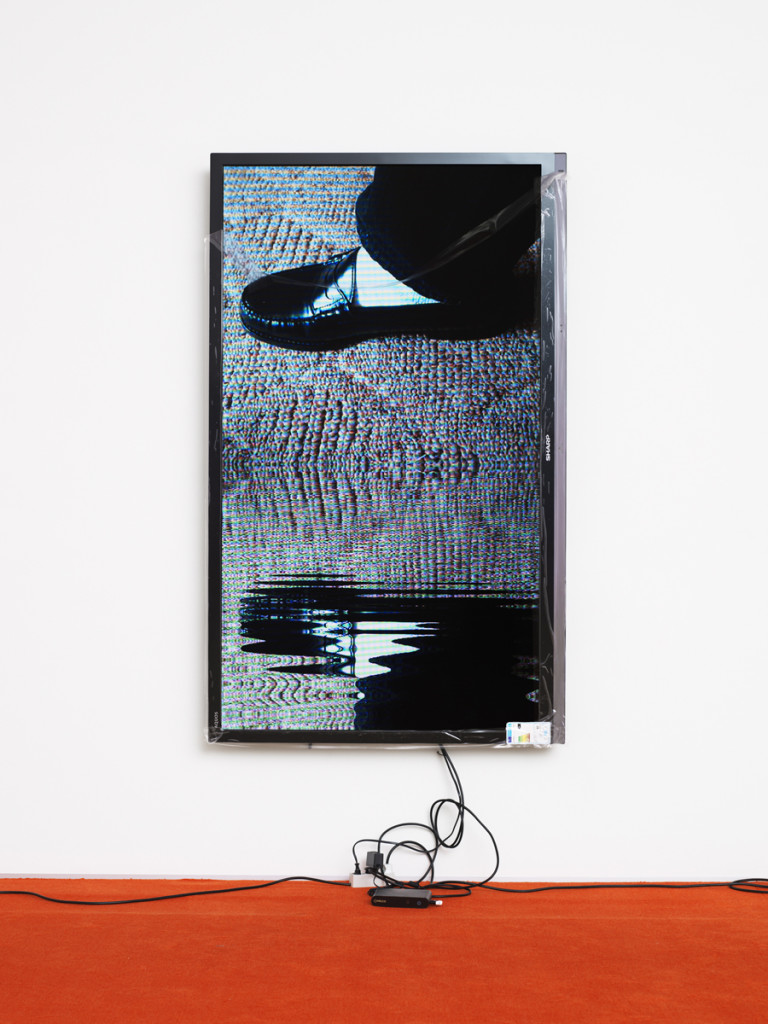 The Lakes series (2011-2015) is made up of installations with flat screen monitors – the omnipresent symbol of the consumer society – which have been literally overturned and set vertically: the artist has borrowed images from pop culture and applied the famous Java «lake» filter revived from the 1990s that creates a rippled effect, as if something were reflected on a liquid surface. The created image is not in motion – as one would expect to see on a monitor – nor static, but a hybrid of the two: the image upon which contemporary society floats and ripples. There is also a catalogue/work of art for the exhibition printed in both Italian and English that is equally sui generis. It resembles a teen magazine more than it does a traditional catalogue and features a series of essays by international curators along with publications typically aimed at the younger set (posters, stickers and gadgets).

Published by GAMeC Books, it includes texts written by Andrew Berardini – Writer, art critic and curator; Jacob Ciocci – Artist and musician; Lauren Cornell – Curator at the New Museum in New York; Giacinto Di Pietrantonio – Director of GAMeC in Bergamo; Aleksandra Domanovic – Artist; Valentina Gervasoni – Assistant Curator at GAMeC in Bergamo; Raphael Gygax – Curator at Migros Museum für Gegenwartskunst in Zurich; Ruba Katrib – Curator at the Sculpture Center in Long Island City, New York; Sam Korman – Independent curator and writer; Tina Kukielski – Co-curator of the 2013 Carnegie International; Hanne Mugaas – Director and curator at the Kunsthall Stavanger; Oliver Laric – Artist; Olia Lialina – Artist, film and video critic and curator; Barbara London – Associate Curator of the Department of Media and Performance Art at The Museum of Modern Art in New York; Daniel Lopatin – Experimental musician, composer and producer; Seth Price – Artist; Alessandro Rabottini – Curator at Large at MADRE in Naples; Stefano Raimondi – Curator at GAMeC in Bergamo. The aim of the work is to overturn the concept of a traditional art catalogue in favour of a more accessible, synthetic and contemporary tool. The graphics will be extremely colourful, with very short texts distributed in a refreshing manner peppered with plenty of images. The language of the essays will be colloquial, similar to what we use in informal correspondence. Everything in the catalogue is promoted with the attitude of a press release, even when it is not an advert: every piece of news will be trumpeted as «new», «exceptional», and «trendy» and – just like the exhibition itself– «not to be missed». «This is all so crazy, everybody seems so famous» was made possible thanks to the generous support of Radici Pietro Industries & Brands SpA. The exhibition is part of a series in honour of Arturo Toffetti. (from the press release)

«Cory Arcangel. This is all so crazy, everybody seems so famous», curated by Stefano Raimondi