The programme promoted by the Arts & Globalization platform, established by Rikke Jorgensen in 2015, ended on Sunday 1 July. The closing event, in the foyer of the Garibaldi Theatre, was a presentation of the Migrant Resources project by Danish artist Kenneth Balfelt, created with the Ghanaian Kwame Aidoo. Previously, over the course of two days (on 16 and 17 June), a series of performances, workshops, participatory art events and conversations with artists and curators coming from different continents took place in Palermo’s Piazza Magione in collaboration with Kaoz. All artists and curators were invited to contribute to the debate on global connectivity and the challenges faced by artists and institutions today.

In accordance with Manifesta’s guiding theme – coexistence and the planetary garden, where seeds of knowledge always produce new flowers and fruits – the will to restart from human beings, exploring the meaning of connectivity as an interrelation between the individual and the collective, seemed to emerge from the programme Art & Connectography. This connectivity goes beyond political borders, flags, false myths and simplistic identifications in search of a deeper interaction that finds its roots within human beings themselves. The spirit of these intense days can be read as an invitation to cultivate humanity and, through this, feed the emotional and affective aspects of existence. 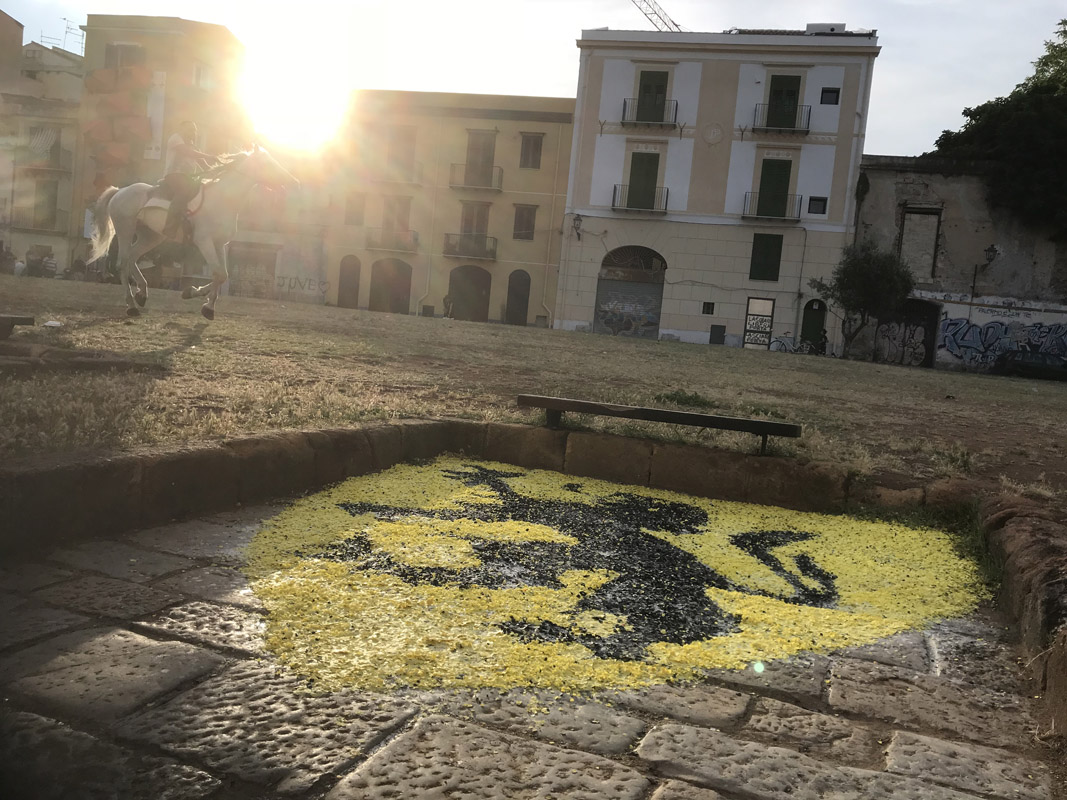 Among the ephemeral installations in Piazza Magione, “The Identical Look-Like” was to be found. This work consists of a flag made with confetti by Belgian artist Gery De Smet, which reproduces the coat-of-arms of tenth-century Sicily and is identical to the symbol of Flanders and another flag. The latter, by the Danish duo Hesselholdt & Mejlvang, is made with sand of various tonalities recalling the colours of human skin that range from light beige to intense brown. As in a Tibetan mandala the artists have created an artwork which, as soon as it is completed, is erased by mixing lines and colours in one vortex. Also in piazza Magione, Romina De Novellis creates a bell using traditional techniques from Sicilian flower decoration, similar to the game of hopscotch that children draw on pavements with coloured chalk. Each box displays the name of a country from which migrants, political refugees and asylum seekers come, while the last box “Europe” signals the desired landing point. The artist remained seated silently in the middle of the bell-shaped court while the flower decorations, a symbolic sea of coloured flowers, enclosed her. 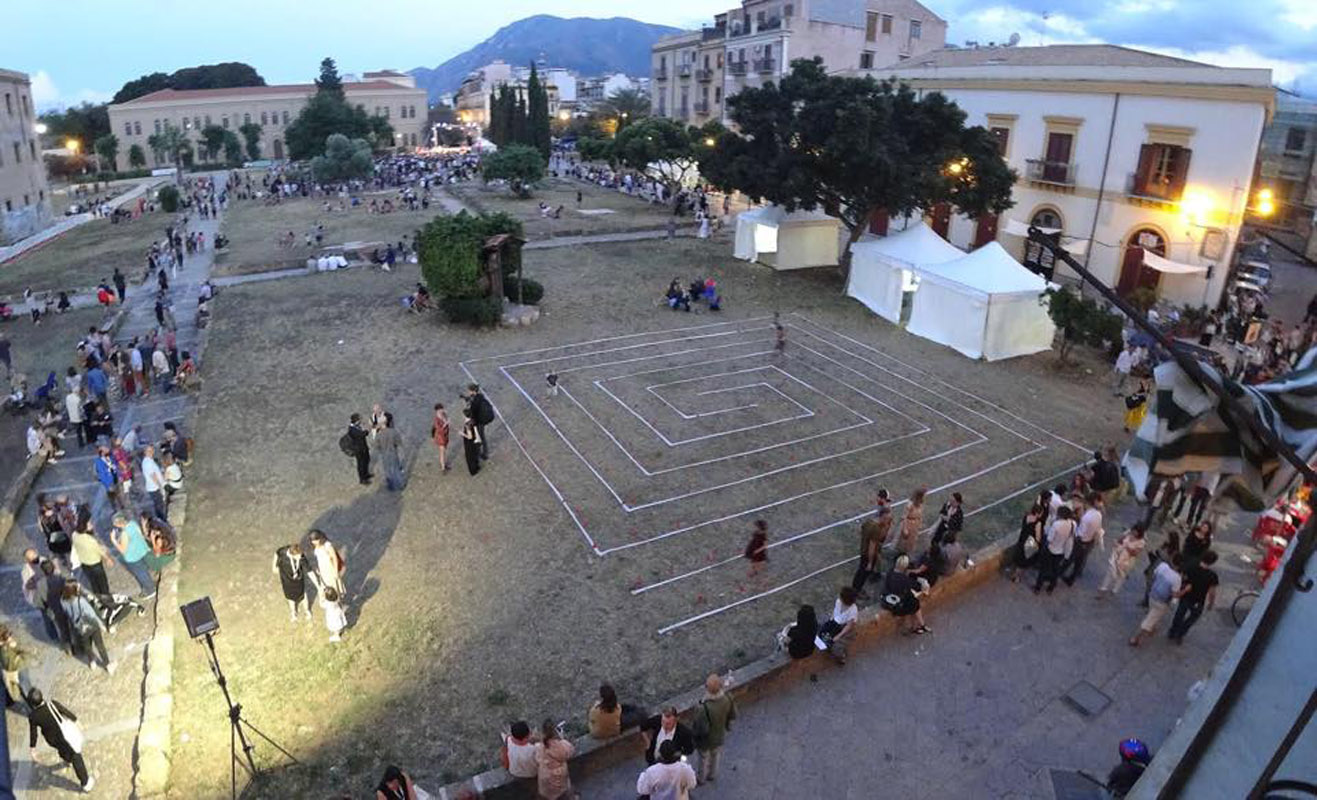 The Chinese-Malaysian artist H.H.Lim conceived the interactive installation “The Mental Trip”, a labyrinthine path formed by two concentric squares (approximately 13x13m) which, as the audience discovered, led to a dead end on entering it. H.H.Lim’s installation was the stage for a race proposed by the Indian artist Manohar Chiluveru, who uses the game as an opportunity to create forms of social interaction. The egg-and-spoon race is a game that was exported to India under British colonialism, becoming extremely popular in the subcontinent at the beginning of the twentieth century. Manohar Chiluveru ran a race without competition, where all participants wore T-shirts printed with a universal value such as solidarity, peace and love of nature – a symbolic non-race, reconciling past and present. 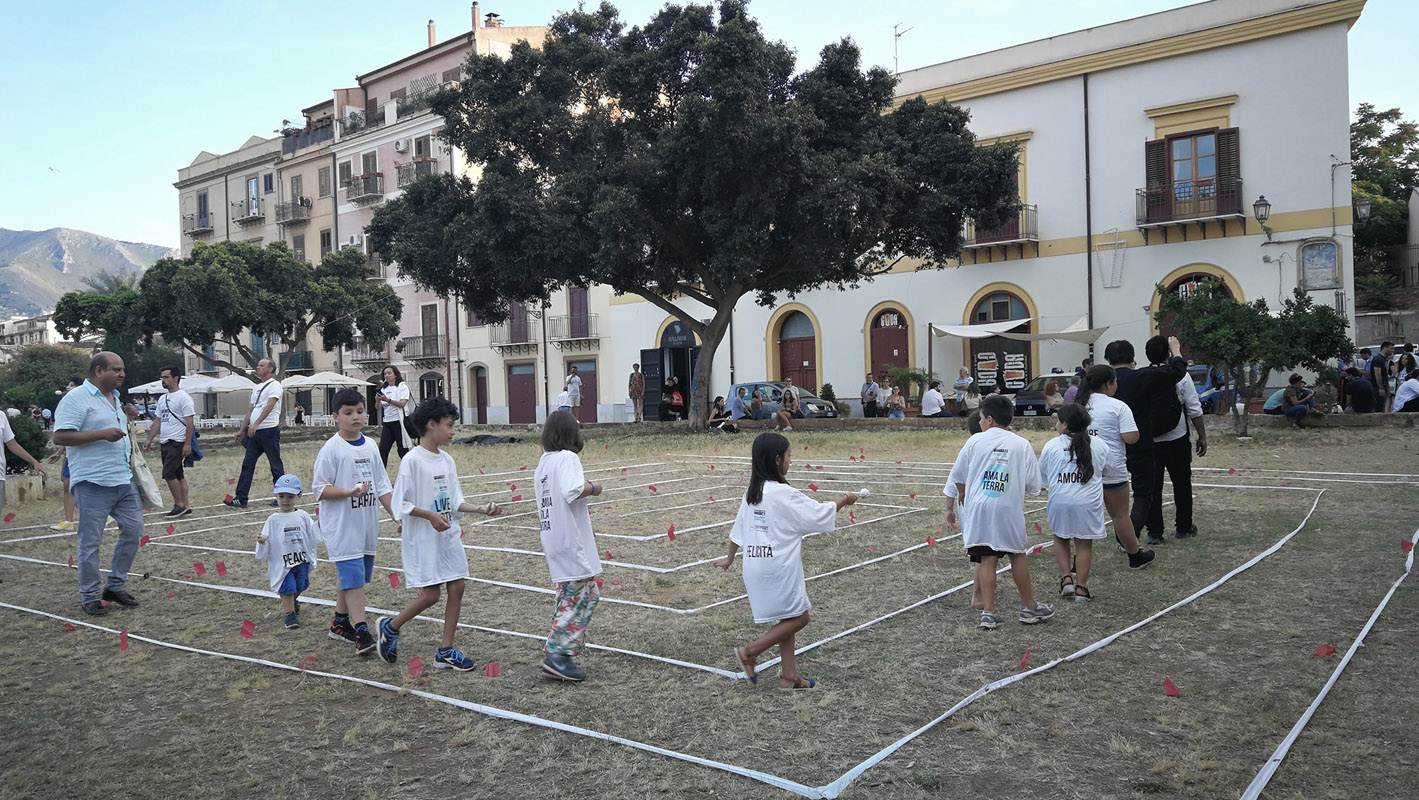 Lisa Batacchi presented Heated Oracles, a participatory art project created in collaboration with the residents of Piazza Magione: a cooking laboratory in which children and young adults made cakes in the Sicilian tradition, symbolic of the many cultural contributions which flowed into the island over the course of the centuries. Retracing some of the stories behind the local recipes – how these originated or were transformed following external events such as wars, revolutions and migration – biscuit recipes, their histories and shapes were identified. Each participant chose their own recipe to make, leaving a trace of their own journey. Starting from the initial question (who am I?) in the making the oracle’s response is revealed (where am I going?). Each piece is therefore evidence of the individual’s attitude to life itself. 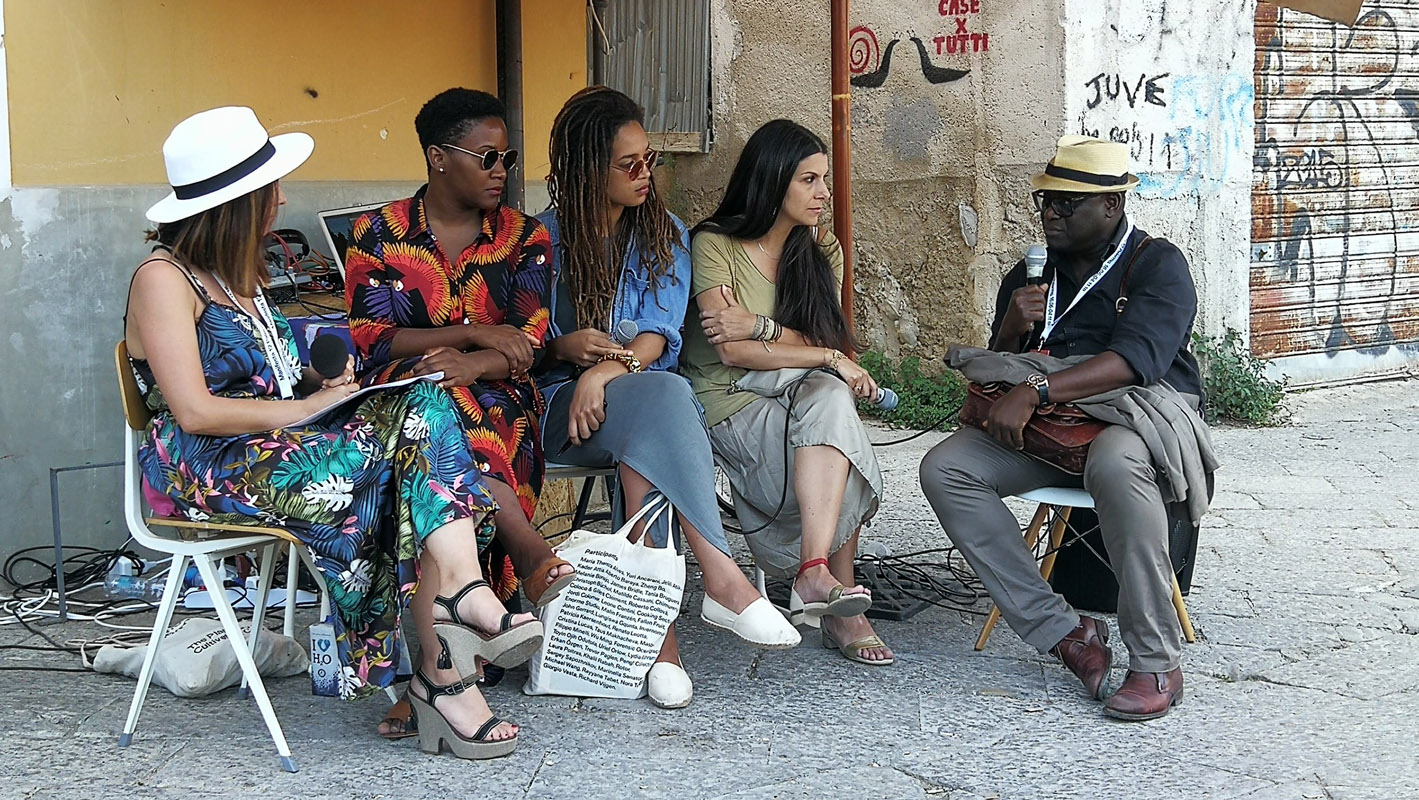 The French-Cameroonian artist Beya Gille Gacha also presented his participatory art project, made in collaboration with the Square’s residents, in which he took the hand casts of three people who would later be part of his series of sculptures, Stolen Hands. In Gacha’s work the body and its individual parts are always revealing invisible traces of life and joy, but also pain. The body is marked by our intimate memories, including collective historical memories, maintaining the signs of these traces that others have left within us. The hand reminds the artist of the atrocities committed in Congo by King Leopold II during the colonial period, when it was customary to amputate the hand of slaves as punishment. It is also the part of the body through which the first contact between two people takes place and it is the hand that reaches out to signal agreement and reconciliation. 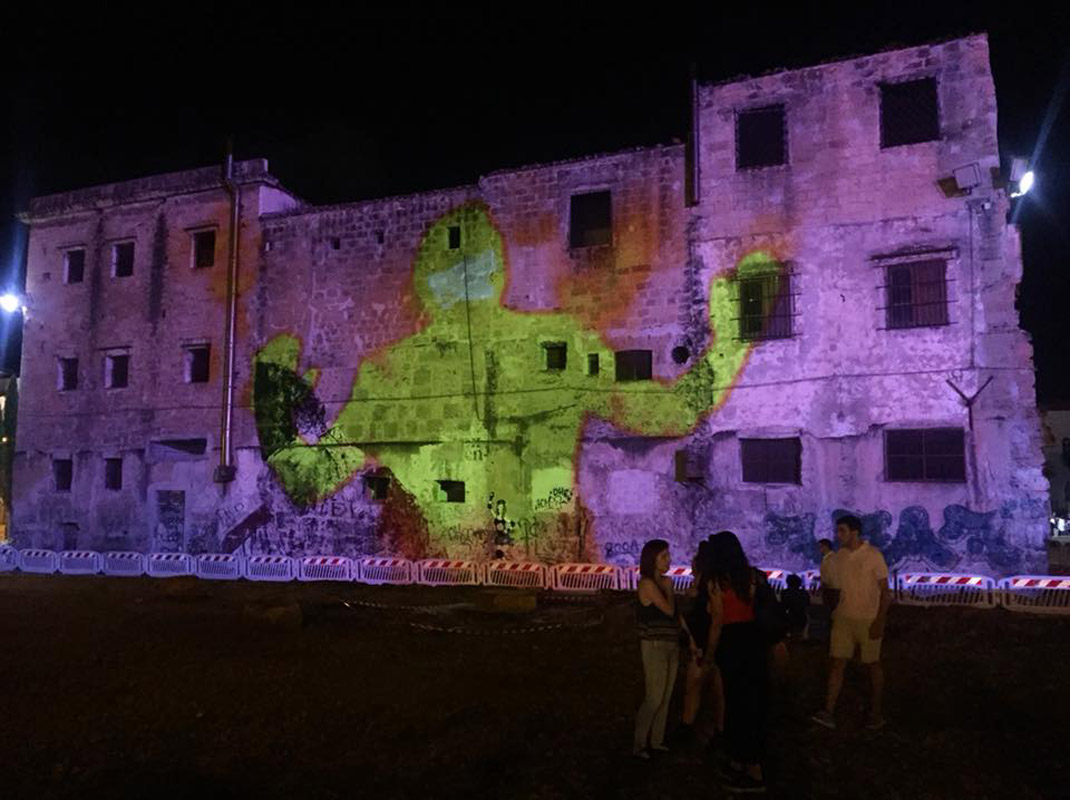 The work by Stefano Cagol also speaks of the trace left by the passage of man and his interaction with others and the places he leaves behind. The Body of Energy is a project involving multiple stages, in which the artist used an infrared camera to film the heat traces left by a number of people. The outcome of this documentation was projected onto one of the palaces in Piazza Magione on Saturday evening. Two works could be seen inside the Kaoz space: the video Looking for Donkey (2009) by Nanna Debois Buhl, a Danish artist who has long been interested in the effects that migration and colonialism have had on flora and fauna; the video installation by the Japanese collective Chim Pom, who presented their work made with materials produced by the recorded series of actions Black of Death (2013) in which they assembled, through a designated call device, an impressive number of crows in the sky above Tokyo and inside Fukushima’s no-entry zone.

Among the special projects, alongside the previously mentioned Migrating Resources by Belfat and Aidoo, which investigates migrant communities in Palermo, the duo Hesselholdt & Mejlvang created The Invisible Territory, an invisibile involvement in the kitchen of a restaurant close to Piazza Magione. When the lights are switched off, the white walls are revealed to be covered in fluorescent writing, a disturbing collection of comments and sentences written by haters that the two artists have gathered from social networking sites. Nasr-eddine Bennacer’s installation, Journeys Into the Future Through the Sea of the Past, curated by Sumesh Sharma and made with tents found in camps where hundreds of refugees and asylum seekers must sleep in France, was given space on the outside facade of Kaoz. The final special project was Radyo Vagabondo by American artists Richard Fleming and Jake Nussbaum, who were invited by Valentina Gioia Levy to create a radio station in Piazza Magione. In addition to following the Art & Connectography programme, the two artists carried out a study on the language of gestures, interviewing artists and public who normally use gestures to communicate. 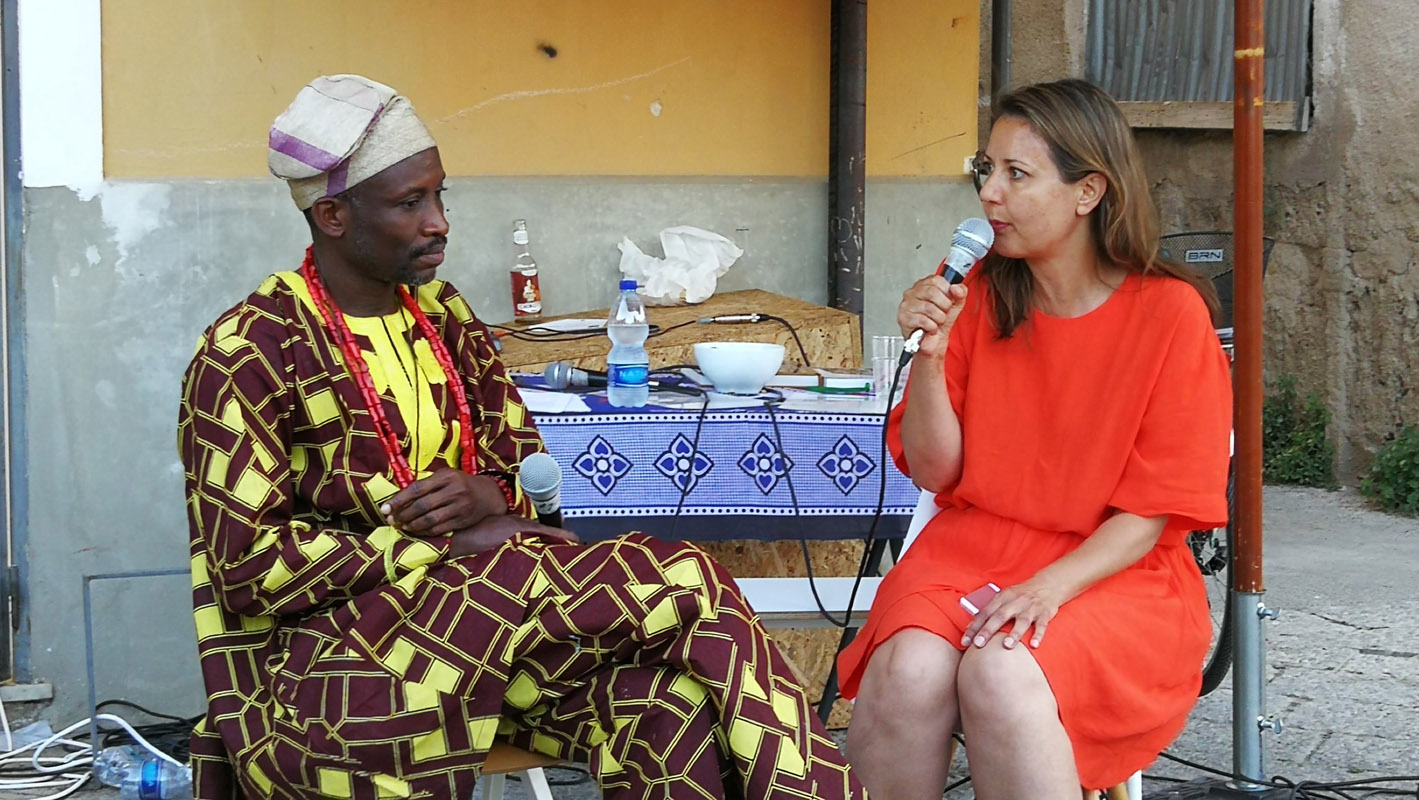 On Saturday morning, the curator Nadine Bilong invited the artist Omraam Tatcheda to launch a series of conversations. Both of Cameroonian origin and respectively based in Paris and Bologna, Bilong and Tatcheda addressed the need for Africans to reconnect with their past and history in order to face the continent’s future challenges. In the afternoon and on the following day, the dense programme of talks saw Rikke Jorgensen in conversation with artists Nanna Debois Buhl, Jeannette Ehlers and the Nigerian Jelili Atiku who, while explaining his performative practice and the connections this establishes with traditional Yoruba culture, defined humanity as a migrant body. 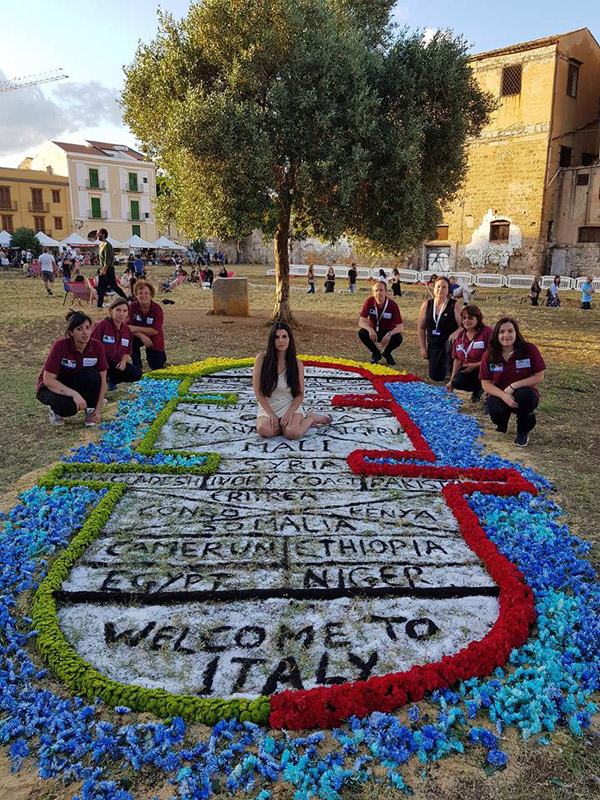 Valentina Gioia Levy invited Alnoor Mitha, founder and director of the Asian Triennial in Manchester, to discuss several issues connected to the mobility of Asian countries and Brexit while Awam Ampka, curator and lecturer at New York University, who – together with Nadine Bilong, Beya Gilles Gatcha and Romina De Novellis – spoke about the imaginary surrounding the body during the age of globalization with its constraints and limits. Finally, Hou Hanru, artistic director of MAXXI, was invited to discuss the challenges that contemporary hyper-connectivity entails for an ‘institution like the one you manage’, emphasising the museum’s interest in the Mediterranean, recalling two recent exhibitions dedicated to Istanbul and Beirut. The commitment of MAXXI, which under Hanru’s direction has hosted several collectives exploring the art scene in a number of different locations across the world, runs parallel with the interest that the director has shown for these themes over the years. “Globalization is desired when it is missing. But globalization is not a fantasy; it is real and produces real issues that inevitably require concrete solutions”.