Dealing With Absence is a virtual choreography, one of seven projects presented to the online public during this week’s opening of Residenze Digitali.

Once the dancers received the VR headset, delivered to their homes, they were invited to dance the moves and poses the actors performed in the film (all inspired by the time of absence), in which they were immersed beyond the screen, deciding the location of the performance. Indoor and open spaces, streets and subways, all these locations connected the performers to different environments where they experimented with the conflict and tension between inner and outer space, between the emotional experience of the body trapped between the image and the surrounding environment.

Absence – seeing without looking, hearing without listening, breathing without asking
Wearing VR headsets, in the room, on the streets
Guessing, relying on chance

The experience revealed in these words is just one of a series of reflections the dancers shared and which appeared on Instagram during the course of the work, which in the final edited version alternated with different choreographic moments.

The screen these dancers wore immersed their bodies into other worlds, isolating them from their surroundings. In the context of technology, the VR headset is the device that most violently drags the person who uses it into other universes, blinding the gaze which focuses on what is nearby, opening it up to other worlds. The body struggles with this perceptual conflict, revealed when it no longer runs on the same track as that of the mind, or at least does not do this in a synchronous way.

The headset – to see, to be seen or not to see,
to connect or to disconnect – is a mask, an inner state, a metaphor.
But also a concrete instrument of choreographic transmission.

So the headset and the experience it produces emerge from another reflection. 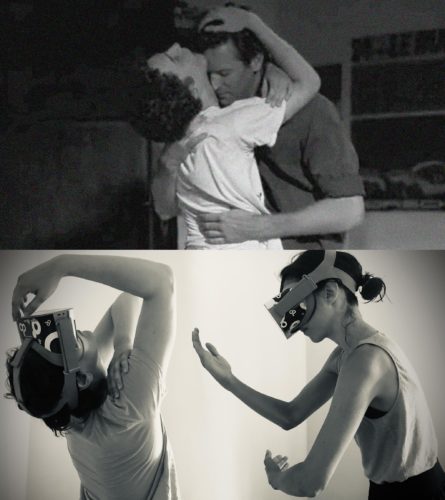 The editing process combined each individual experience with their strong sense of loneliness, transforming this into a choral choreography sublimated into a poetic form that, in its literal “poietic” power, empathically reaches for the viewer’s emotions, even through the screen and whatever the device.

Dealing With Absence is available online until 28 November, together with the other six performances, which are all very different from each other, but equally committed to translating the experience of the performing arts into a digital space, also focusing on the time it takes to be viewed that marks the attention at a pace that is never too long, as often happens in these cases.

Residenze Digitali is running until 28 November and viewers can watch Dealing with Absence again, as well as all the other 6 residency projects, in replay mode or live.

Please visit here the website for the complete and updated calendar of events.

AUDIENCE ON STAGE at «Trouble» by Gus Van Sant