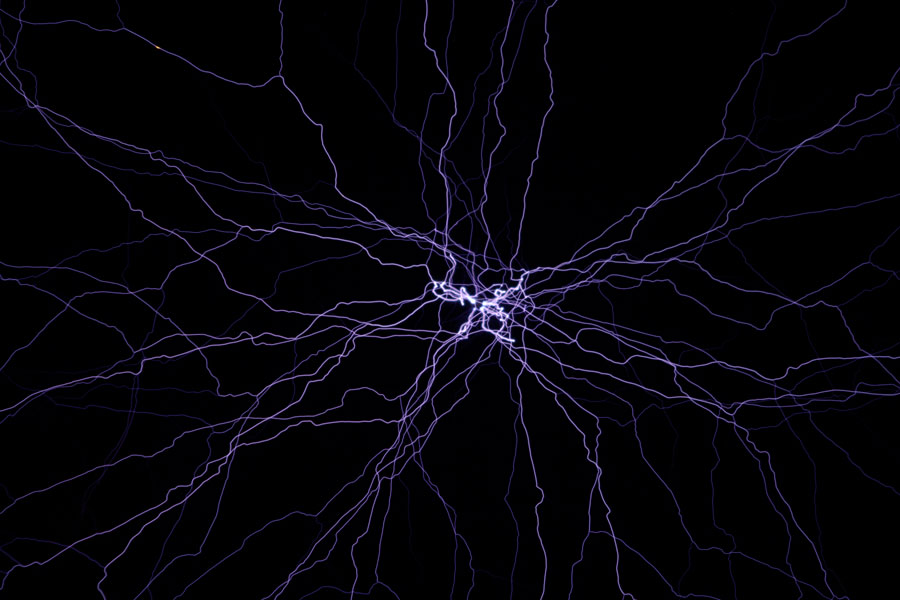 Once again this year, the halls of the MACRo located in Rome’s Testaccio district are hosting Digital Life as a part of the broader Romaeuropa Festival. Digital Life is an experimental platform in which contemporary art encounters technology.

The spirit of Digital Life for this 2014 edition is identified with its title, Play, and focuses upon two elements: music and interaction. A path of a collection of works unwinds through the large halls of the Pelanda. Contemplation and action; harmony and shrieking; the lyricism of thought and the chaos of experimentation seem to blend together effortlessly.

Dissecting, reconstructing and harmonizing a story: this is the «poetry of variation» (1), the consonance of several languages that inspired Babel V: Dream Man by Douglas Henderson. Dream Man, the poem by Russell Edson is reproduced piece by piece by speakers placed in a helical position. 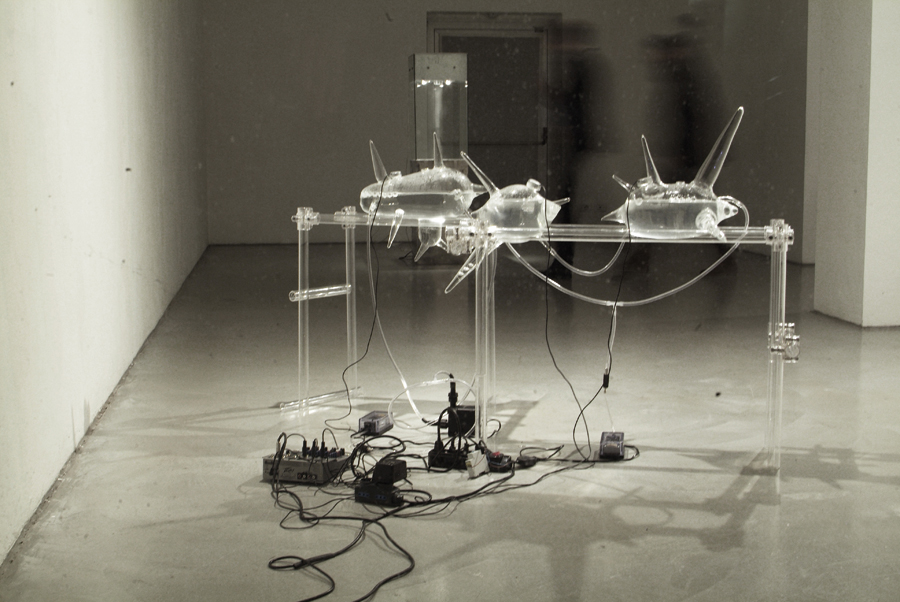 Everyday life is overflowing with sounds that are more or less unheard even if we are unaware of creating them. Donato Piccolo reminds us of this in his Orchestra Stocastica [Butterfly effect 2]. Mechanical elements reproduce gestures and objects that we use every day and he stitches them together to form an original ensemble: our very movements in space generate the noise.

Pietro Pirelli extends his multi-sensorial installation to architectural space with the help of Gianpietro Grossi. The interactive Arpa di Luce (Harp of Light) is made up of laser strings which make the large hall resonate as if it were a loudspeaker: the public can put it in motion and live the unique experience of ‘seeing music’. 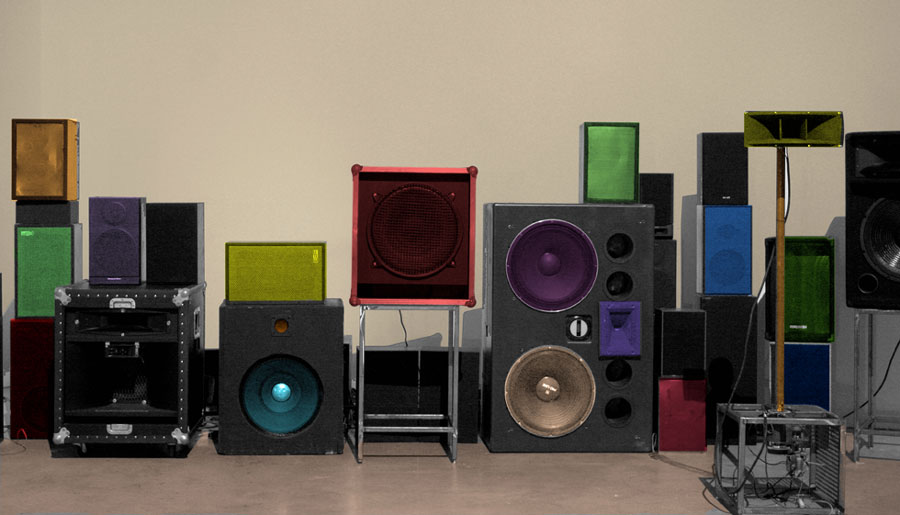 Music and kinetics are interconnected once again in the installation by Zahra Poonawala where a wall of speakers reproduces chamber music while mobile ‘solo’ amplifiers which follow the motion of spectators create interference with the audio landscape.

If the presence of spectators can cause interference, it creates a pure collision in the work by Alexandre Burton. His IMPACTS is made up of hanging Tesla reels that launch dangerous and fascinating electromagnetic flashes, filling the room with sounds that become increasingly sharper and more strident as the spectator draws near. Besieged by the exasperating sound, we arrive in front of Cycloid-e ready to fully savour the contrast. This pendulum designed by André and Michel Decosterd (COD.ACT) is made up of metal pipes with speakers that swing back and forth, filling the air with metallic and reverberating sounds. Harmonious and random in its rotation, with its resplendent metal and reference to our images of science fiction, this is one of the most irresistible aesthetic-kinetic experiences on exhibit. 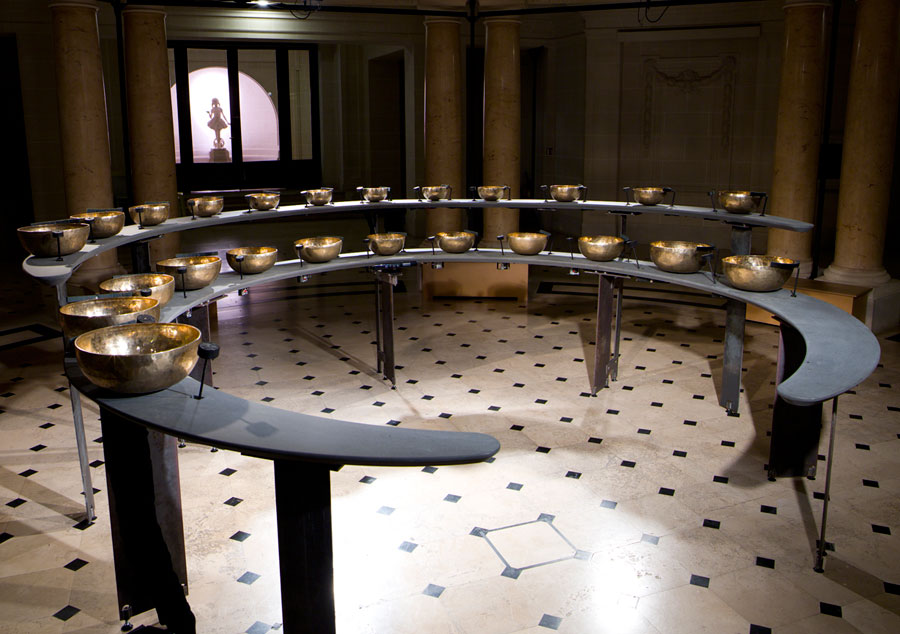 The future was not the only source of experimentation for Digital Life. Tradition contributed some ideas as well. Tibetan looms and bells are elements that offer much in terms of anthropological-cultural value. Their implication in the installations La Damassana by Léonore Marcier and Métier a tisser musical by Kingspley NG produce extremely evocative patterns of light and sound that also involve the public.

An invitation to gestural art and the emotional participation of body and mind are at the base of Balançoire, the audio work by Veaceslav Druta. It is poetic, playful and childish in its invitation to strum the strings of a guitar while swinging back and forth on a swing. We are projected directly into the dimension of memories, thus producing an evocative backdrop of a lost age. 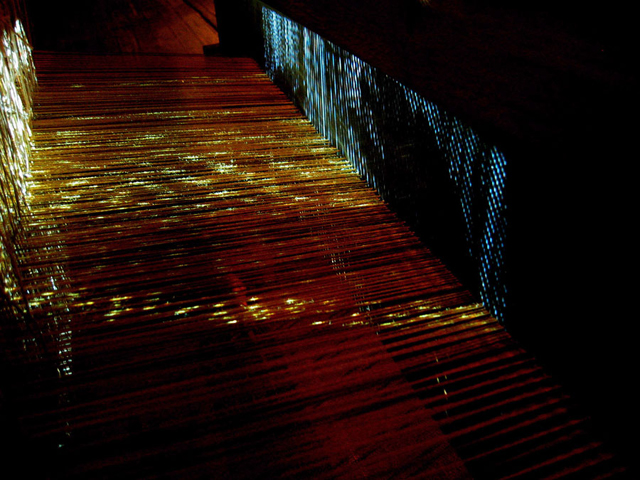 Evoking, more specifically, creating awareness about a social theme is also the goal of Heewon Lee with 108. The image projected around a dark room is an «exclusively typographic film» (1), the dramatic novel made up of testimonials of orphaned and abandoned children whose characters are produced by 108 music boxes.

The end of the Play exhibition is inevitably the end of a journey of thought. It drastically reduces the distance between the observed and the observer, no longer inherent to the process of musealization. It’s as if the miracle of blending calculation to emotion has taken place – in reply to an ancestral incitement towards poetic consolation as we take our giant steps towards the future. If it is true that music can be ancestrally configured as an art capable of acting on the deepest subconscious level, then Digital Life 2014 is most definitely completely lyrical, intoxicating and moving: the ascetic medium reveals the potential of a more emotional humanized technology. 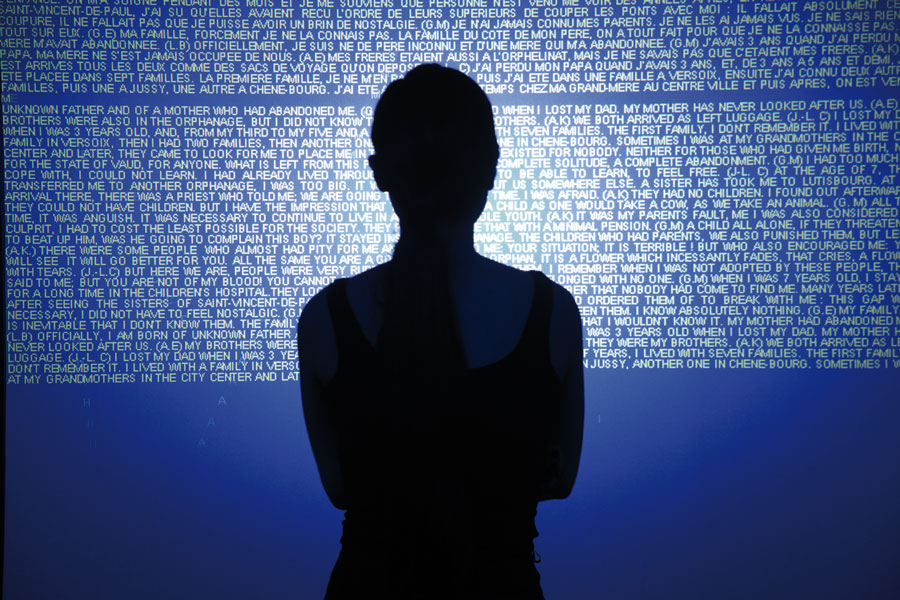 «(Dis)fide» at the castle of Barletta