Donato Piccolo’s works and vision arrive into the spaces of the Pomodoro’s Foundation in Milan. Piccolo’s Imprévisible inaugurates the Foundation’s new project room curated by Flavio Arensi, fist of a three acts exhibition.

The auto-mobile, a recurring image in Donato Piccolo’s work, particularly during his first years, resurfaces in this exhibition, overturned and ‘re-incarnated’ as a Kafkaesque insect with six robotic arms designing its profile. Two tortoises inside a glass display cabinet provide the input for this monstrous creature’s movement, mediated by an algorithm.  It is these animals, slow-paced and wise, that activate the movement of this gigantic creature. 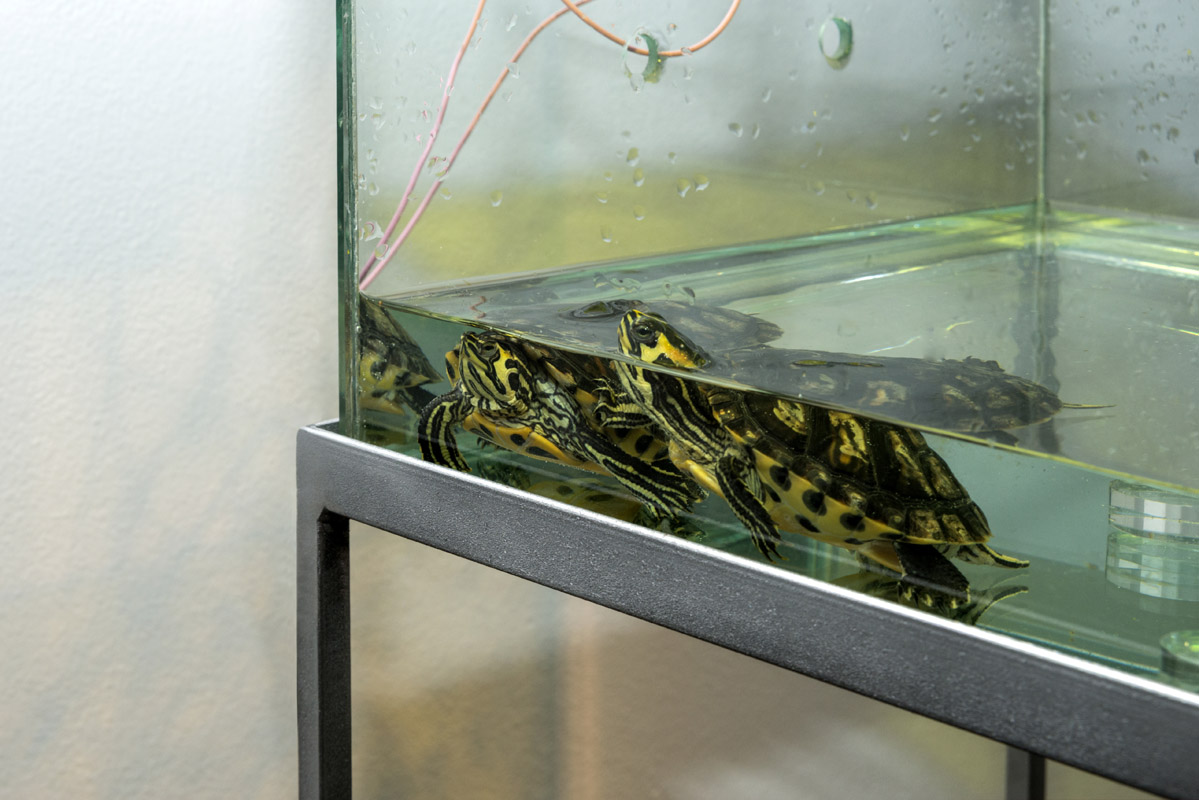 Artificial Intelligence animates cardboard boxes in Anna non porta rancore (Anna does not hold a grudge) and allows Anna to walk around the room and observe, embarking on the same journey of learning that the protagonist of Kafka’s Metamorphosis, Gregor Samsa, undertakes in his new ‘animal’ life. 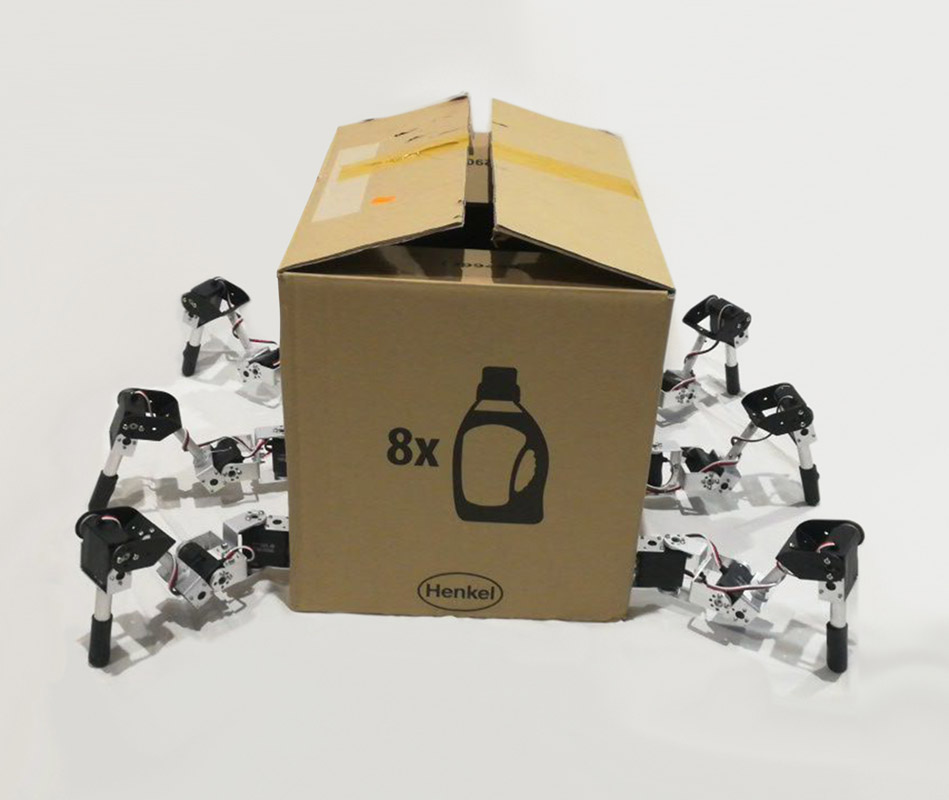 Donato Piccolo, who has always been creatively engaged in a learning process, attempts to observe his earthy room by experimenting, activating circuits and reflecting through drawings, as demonstrated by the drawings on paper that accompany the exhibits.

In Piccolo’s research, oscillating between nature and artifice, the enquiry into the consignment of man’s conscience to synthetic intelligence appears to emerge as a matter of urgency. AI represents what is now being added to contemporary society and what is, at the same time, being taken away from man, who is on the way to having his dominant role displaced. Man’s intelligence is being entrusted to a machine that merely observes, that does not take emotions into consideration, that does not ‘hold a grudge’. 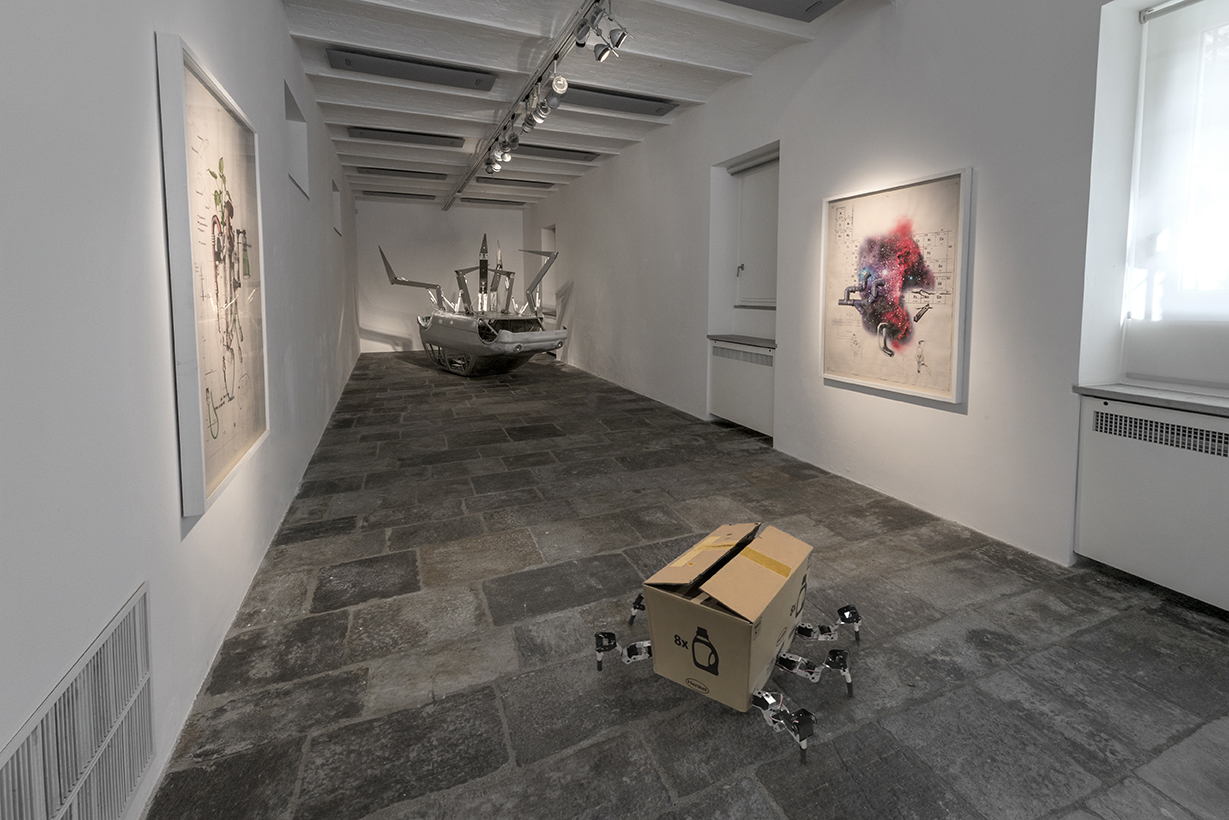 “We are standing opposite something that is processing information, explains Flavio Arensi in his critical essay. “Amassing information and modifying it according to precise mathematical calculations, without being distracted by the emotions on which all our human decisions depend. The censorship of feelings means abdicating all our human subjectivity, in other words that which outlines our individuality.”

We then arrive at the learning experience of algorithms, those that provided Norbert Wiener with the idea of introducing, during a meeting at Princeton in 1945, slightly before the establishment of cybernetics, the terms feedback, input and output. These terms have now entered our common language and are increasingly being used in the field of artificial intelligence. At the time Wiener was establishing a science that studied how machines worked using men’s nervous systems and brains as his model. It must be noted that after the end of the war, Wiener distanced himself from this research, anticipating its risks for humanity. In addition, it is important to consider how neuro-functioning today is fundamentally conditioned by machines. 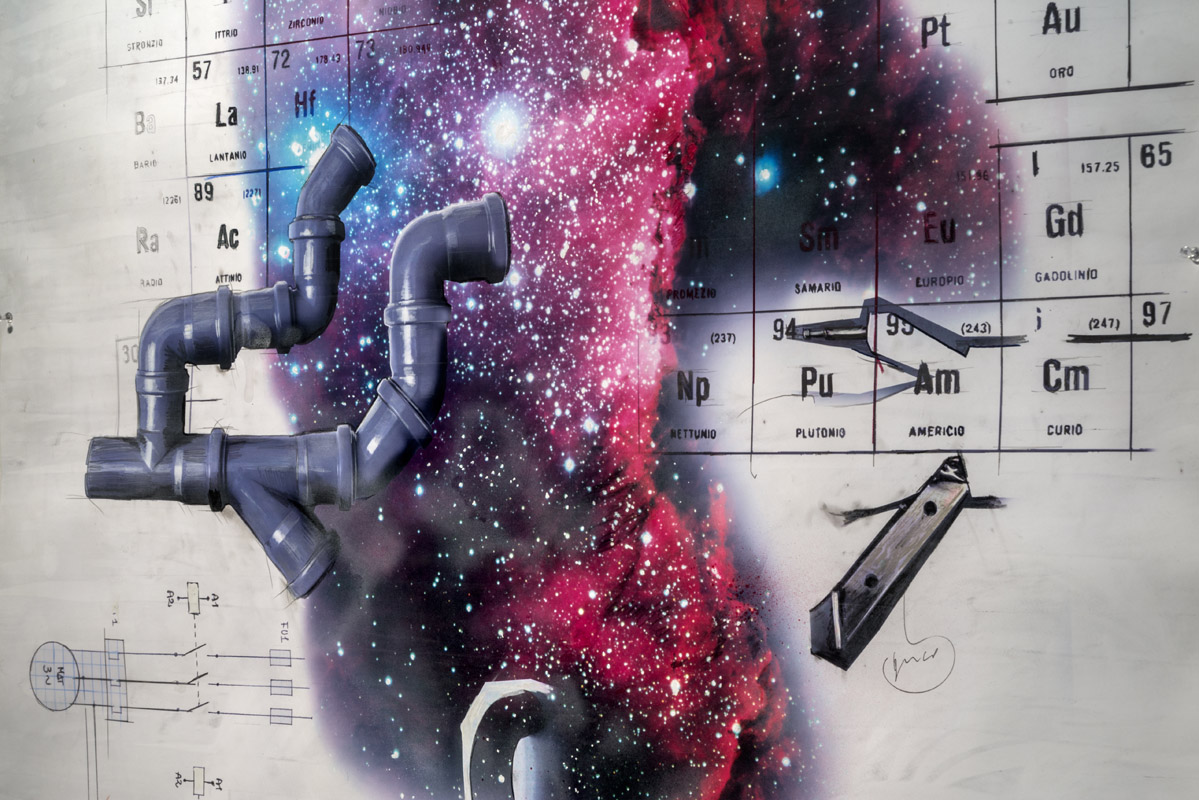 So in re-attributing what is natural and what is not, the human species must be included. Harari recounts how humans will overcome the Age of Sapiens, giving way to Homus Deus, an immortal man who is eternally happy – a man who acquires a role only when he promotes and serves an algorithmic device. The research for what is invisible, which drives Donato Piccolo’s creative curiosity, merges with the unpredictable. This is a contraction that is perfectly reflected in the French term imprévisible, which gives the exhibition its title. Navigating through unknown territory and discovering new emerging realities in the process, language becomes an increasingly important tool.

The life of a used cardboard, further humanised with the name Anna, roams around the room, observes and learns, whereas the insect-machine only acts as a result of hybrid input. If a new conscience were to fill the empty machine and cardboard’s shell, this would be ‘unpredictable’. It would be easier for the word ‘grudge’ to cut itself off from its emotional meaning, leaving space for something else, which is yet to be discovered.

Donato Piccolo. Imprévisible represents the first of three acts of Proust’s Room, curated by Flavio Arensi. This work is imagined as “a pretext to look at what is happening in society and to men through sounds, through what is absent as well as what is present, through the past as well as the future”.