Moving Layers. Contextual Video in Art and Architecture is a book that explores image in motion, as seen through its power of bringing elasticity to surfaces, of altering and rethinking their structures, of reclassifying the urban experience and that of space in general. Two artists and theorists have taken it upon themselves to tackle such an endeavour: Alexandro Ladaga and Silvia Manteiga, also known as Elastic Group of Artistic Research, partners in art and in life. The book’s first edition was published by Edilstampa in Italy in 2006 and this year an updated version in English was released by the same Publishing House. 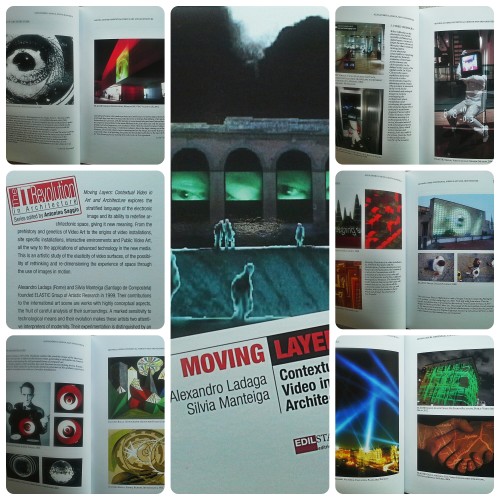 Their study retraces the history of image in motion and extends back to its antecedents: studies on photographer Muybridge’s concept of motion, Futuristic theories on spatial dynamism, Marcel Duchamp’s forethought and intuition regarding electronic images, the symbolic world of Léger and many others anticipated image in motion and introduced its entry into the media era that initiated with pioneering experiments with Nam June Paik videos in the 1960s. From this moment in time on, many diversified applications of image in motion followed into other creative spheres leaning towards various disciplines: analyzing the potential impact of revolutionizing space and what was considered the traditional spatial-temporal coordinates.

The Elastic Group takes a sensitive and perceptive approach to all of their works (whether videos or site-specific installations) and offer a vision that combines theory with experience. Vincenzo Trione describes their modus operandi as follows in the book’s epilogue: «They don’t limit themselves to merely reporting emotions or emergency zones. They filter what they perceive through a polyphony of pixels disseminated in a shower of traces, in overlapping lines and points on the surface» (Trione, Moving Layers, p. 67). 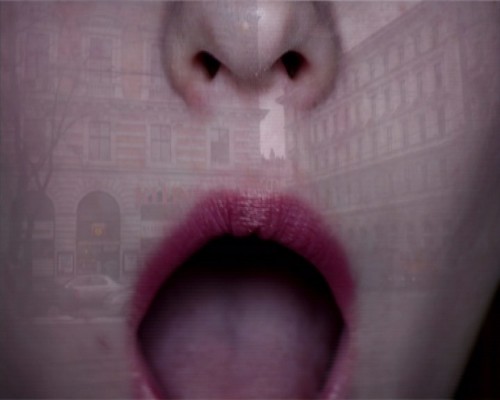 With this attitude, they  follow the metamorphosis of the image in motion as it is dictated by its intrinsec alchemic ability to transform surfaces and making space «elastic». «The video image – they state –  is capable of reaching impossible spaces, relative environments, contracted spaces; it can be transmitted simultaneously via satellite or via networks to different spaces thanks to the power of transmission in real time which has generated the desired wireless imagination of the Futurists» (Moving Layers, p. 14).

With this knowledge which, in their case, is also empirical the two artists are led by the flow of electronic image, pursuing it into the world of video installations and works of Public Art and Land Art. A journey into the «archaeology of the future» which can be brought to the surface not so much by digging their way through the depths as by «scraping the surface, the palimpsest like that of ancient frescoes created (in this instance) by the superimposition of multi-layered images and moving layers» (Moving Layers, p. 52).

There is an alternation between the all-discerning historical reconstruction and a closer analysis of the video’s impact on space – the result of its ability to penetrate and pass through surfaces, transforming private and intellectual space into public space and revolutionizing an urban environment.  «Video art, in its evolution from its site-specific origins (installations in closed spaces), has gradually been relocated outside, overlapping with architecture and creating a new type of public art – Public Video Art – that has become increasingly more relevant» (Moving Layers, p 47).

In these days Screencity Lab a Riga (Latvia), in collaboration with Interactionfield, is organizing two urban screenings in the context of «Waterpieces Festival» (Riga, Latvia 15-17 August 2014). The work by Elastic Group of Artistic Research is present with three works: Beyond Lines (2001), video installation that explores parallel stories to be read within the lines produces by the electronic image; CODEC Lossy (one of the series) videosophic research on how the video image is perceived by the machine, and Subliminal Wien (2005), a video collage where images and sound overlap to map the iconic language of the urban environment (in this case in relation to the city of Wien).