Federica di Carlo brings a new work, from her journey between earth and cosmos, to the National Gallery of Modern and Contemporary Art in Rome

For some time now, Federica di Carlo’s creativity has situated itself between the earth and the cosmos, doing so through a journey that began with an investigation and reflection on human perception and light – the light that builds images in the eye, generating rainbows and much more. Recently, her gaze has turned to the cosmos, the sun, the stars and how all of this is rendered by our perception through light and listening. Scientists from all over the world have opened up what were the most inaccessible laboratories so that their experiments aimed at investigating cosmic matter can be captured by the gaze and sensitivity of this artist – part scientist, part dreamer. The worlds that are made available to Federica di Carlo’s knowledge and sensitivity are recreated in installations, photographs and objects, situated in subtle border zones, in the strength, fragility and balance that inhabit and support everything. 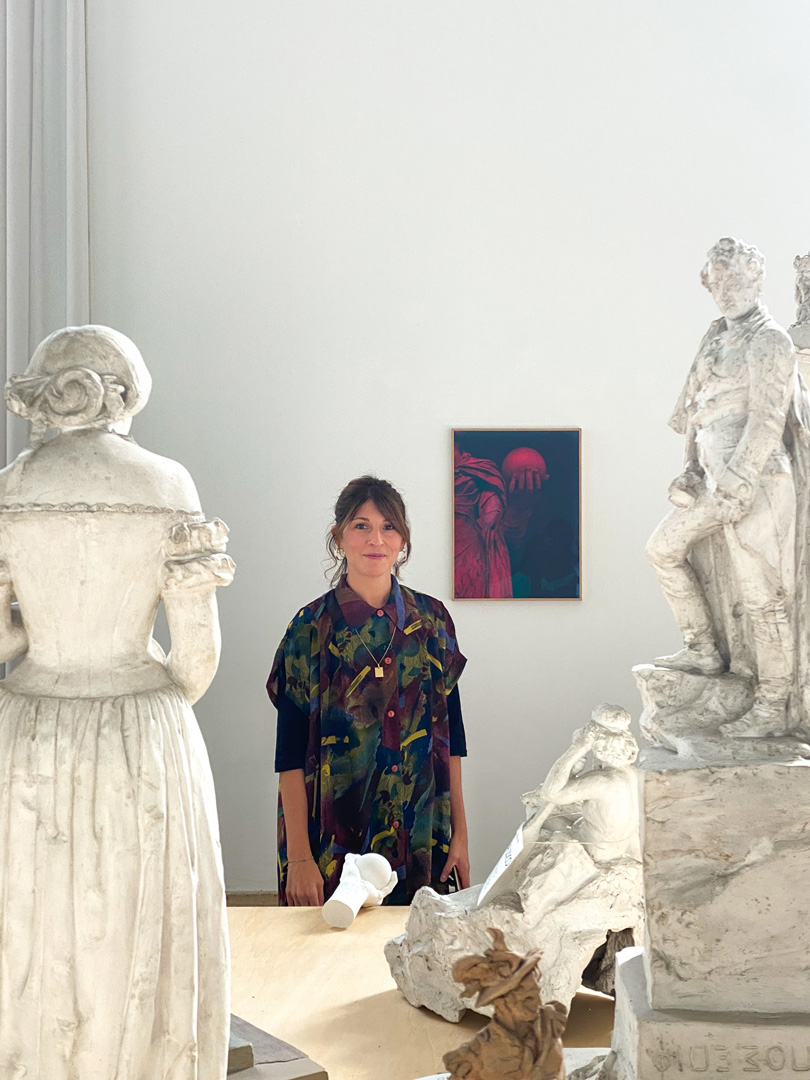 Volevo il Sole (“I wanted the Sun”), a rough plaster model of a hand capturing a sun, and a photograph depicting the detail of the statue of Urania, goddess of Astronomy (kept in the Vatican Museums), depict a fragment of this cosmic world in the plaster cast space of the Galleria Nazionale d’arte Moderna e Contemporanea in Rome, where it will be on display until 14 October.

The hand in plaster makes an unthinkable gesture, grasping the sun and bringing it down to earth with the same conviction as someone who tries to grasp something in a lucid dream and take it away with them. The hand hangs in balance, emerging from a large table where it hides among the other plaster works. 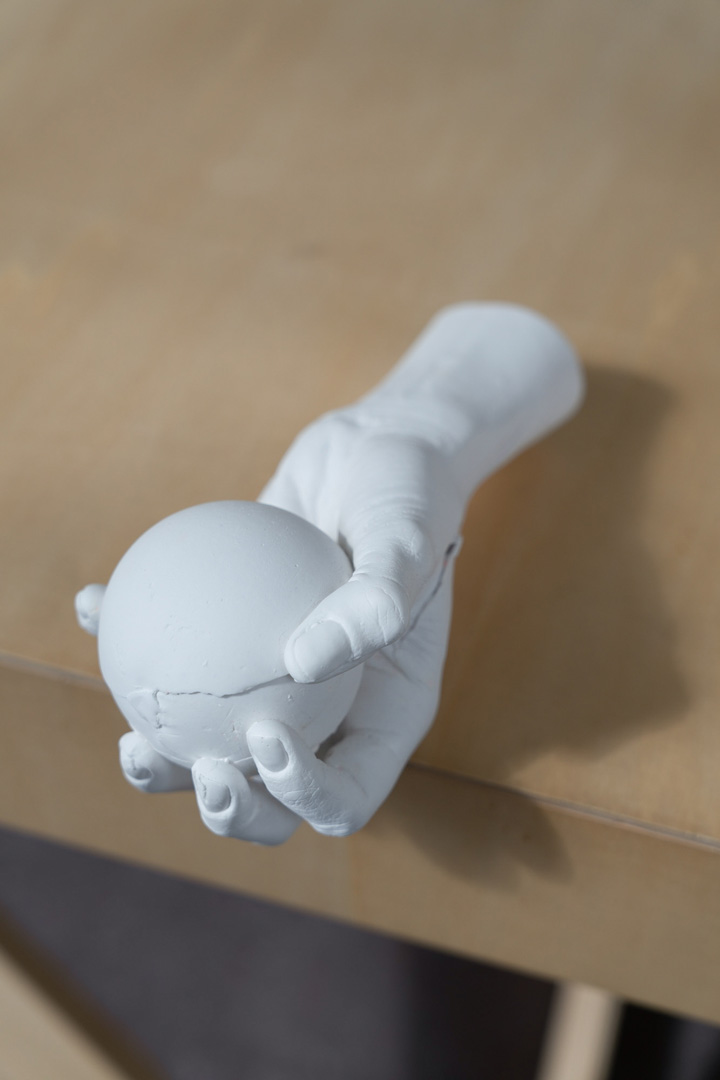 If, at first glance, it passes almost unnoticed, when we finally catch a glimpse of it, then the sculpture, the hand, the gesture and its position begin to occupy a central place. We focus, we slow down, we observe. The plaster begins to stand out as an intruder: white and fresh from being recently processed. Its precarious balance becomes overwhelming. We discover that the hand is not actually holding the sun. Rather, it is on the edge that divides the possible from the impossible, existing and occupying a line of equilibrium which, in this case, is also rendered in terms of an installation.

The hand protrudes from the table and the ball it grasps, exactly this object, seems to weigh the hand down. It represents a moment and a lingering shudder, a succession of moments where each of these seems the one destined to cause the ball to fall, thus shattering the dream.

The urge to catch the ball/sun, to save it from falling, is instinctive. The momentum frees even the most attentive visitor from the normal rules of a museum: “look but do not touch”. But something is at stake here, and the installation itself is outside installation norms, occupying an unexpected space, protruding from the table, from the notice board, from the aura that separates it from what can be thought of as “graspable”. But, in this moment, everything is suspended; this is where and when we must look for the sun. The hand grasping it is an illusion, a representation of this moment. If the sun is removed from this position, it ceases to exist. Any rescue attempt may prove lethal. 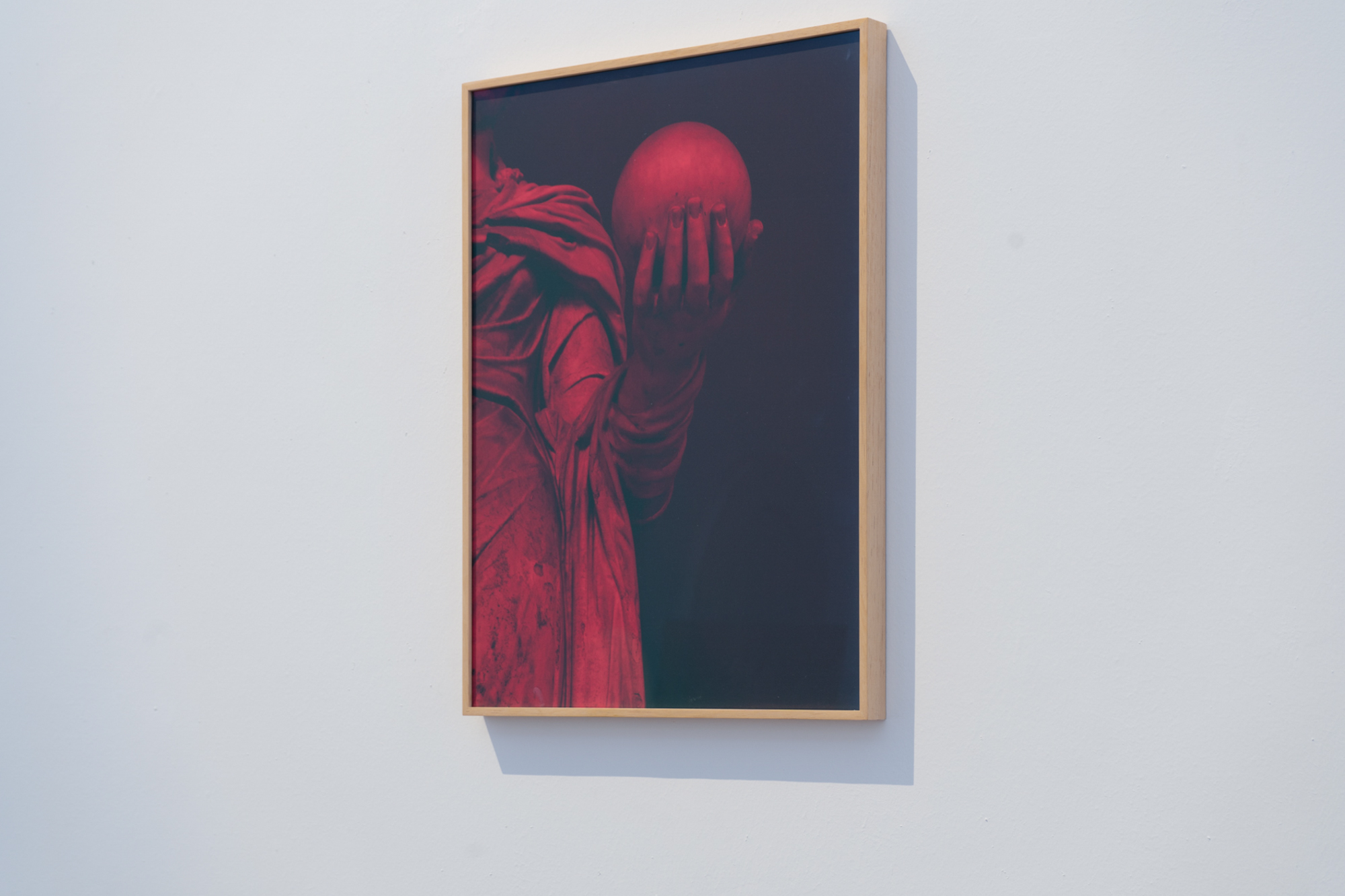 The impossibility of its positioning is reflected in the colour magenta, which does not exist in the visible spectrum. It filters the portrayed detail of Urania’s hand caught in the gesture of supporting the sun in a balancing position. The grace, balance and fragility of the gesture are proportional to its strength. It is these aspects that detach themselves from the dream of the myth and materialise in the plaster hand that tries to grasp it, repositioning both sun and hand in an even more precarious balance that holds them “in its grasp”.