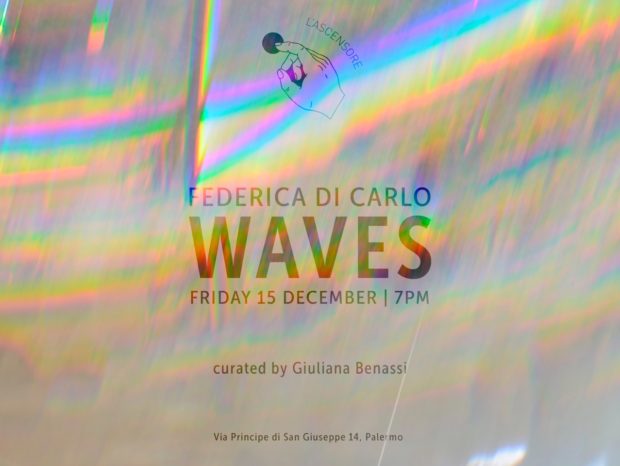 The Lift, an 8m2 room located in the historical centre of Palermo founded by Alberto Laganà in 2015 as Project Window, introduces Waves, an installation by artist Federica Di Carlo (Rome, 1984).

The work represents a reflection on the relationship between man and nature, highlighting its fragility and the need to use the eye’s gaze as an instrument of connection.

The rainbow – a recurring idiom in the language of this artist – is established as a mode of seeing and transforms itself from a positive archetype into both a synonym for anxiety at man’s gradual alienation from nature and a warning light for global warming. The ethereal presence of the piece interprets the location’s materiality, altering the uniform flooring of the space.

The work’s consistency is determined by the light – a sign that man can be connected to the surrounding environment and initiates a dialogic space with Palermo itself, a city characterised by the presence of the sea and its centuries-old cultural complexity.

In the work Waves, the fine balance within the laws of nature (an object of study for the artist thanks also to the collaboration with physicists and atmospheric scientists) and the possibility of rupture caused by man are poetically translated by Di Carlo: an epiphany of intermittent light that can be viewed by inhabitants and visitors to the Sicilian city. (from the Italian press release)

Federica Di Carlo’s work begins with the observation of nature and its relationship with human beings. The gaze is the artist’s privileged medium, meant as “place” of meeting, interference and boundary between man and the environment. In her work Di Carlo often collaborates with scientists and physicists from around the world to create some of her installations. She has displayed her work in several exhibitions in Italy and abroad; among these: Museum De Domijnen, Sittard; Swiss institute, Rome; MAXXI, in collaboration with Fondazione Mondo Digitale, Rome; MASS MOCA Museum, North Adams, Massachusetts, MA-US; There is no place like home 2016, Rome; Archivio Menna-Binga, Rome; Dimora Artica, Milan; Cinica Gallery, Palazzo Lucarini (Trevi Flash Art Museum), Trevi.