Federica Luzzi at the Nuova Pesa

On show the latest works realized with experimental techniques, even those that appear more traditional, such as photography and drawing.

Federica Luzzi’s sculptures in the three rooms of the new Nuova Pesa in Rome are all made using experimental techniques, even those that appear more traditional, such as photography and drawing. Experimentation has always been at the core of the artist’s work.

Shell, del crepuscoloo dell’alba is both the title and the spatial-temporal limit that inhabits Luzzi’s works where content, medium, material and technique exist in their continuous reversibility and mutual generation. Shell is a cycle of works that encompasses twenty years of research ranging from music, oriental tradition and all kinds of craft techniques to astrophysics, and which finds its home in this very term, shell, and its multiple meanings (shelter, case, bullet… ). 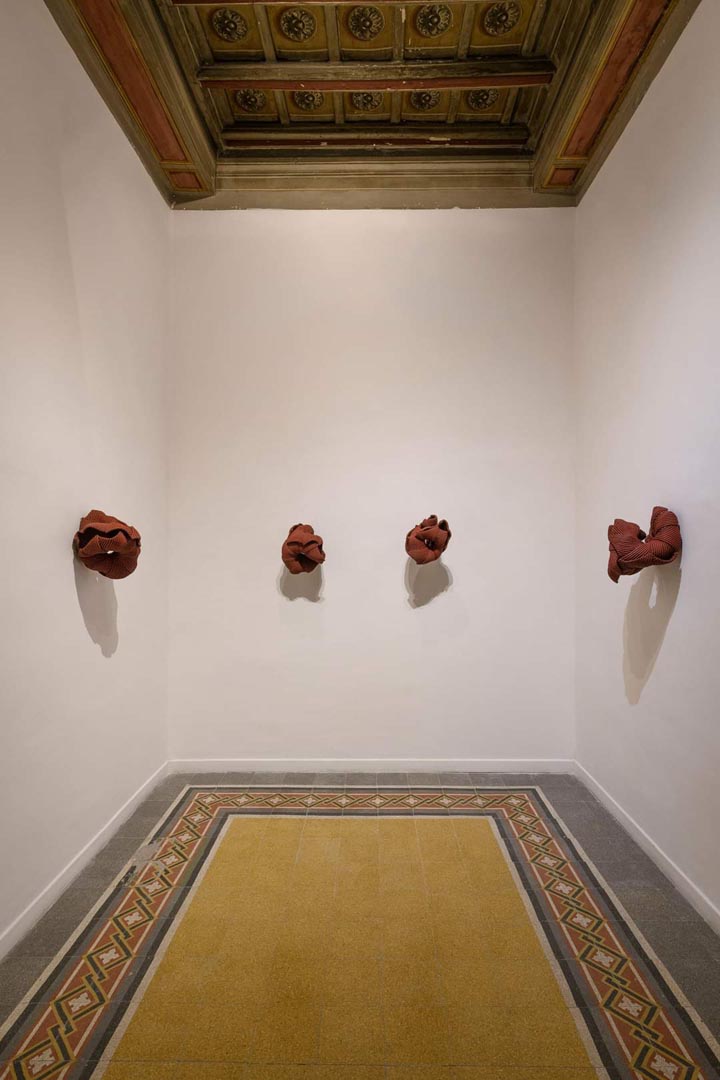 Shell also represents the shelter escaping human control as a safe haven during the period of isolation due to the pandemic, a time during which Federica created her most recent body of work. The sense of precariousness and instability is sometimes the driving force behind the search for new horizons, which has now been encapsulated in the works of this special phase of research.

The sculptures in the first room, made with an experimental technique consisting of knots, hematite powder and wax, seem to emerge from the walls like flowers. Their location allows their position to be changed from time to time. Sometimes they can be found in an open position, inviting one to look inwards, and at other times they are closed in on themselves. Whoever enters the gallery will always be confronted with something new. Shadows carefully orchestrated with light accompany the sculptures – fragile and powerful at the same time – just like flowers and life itself. 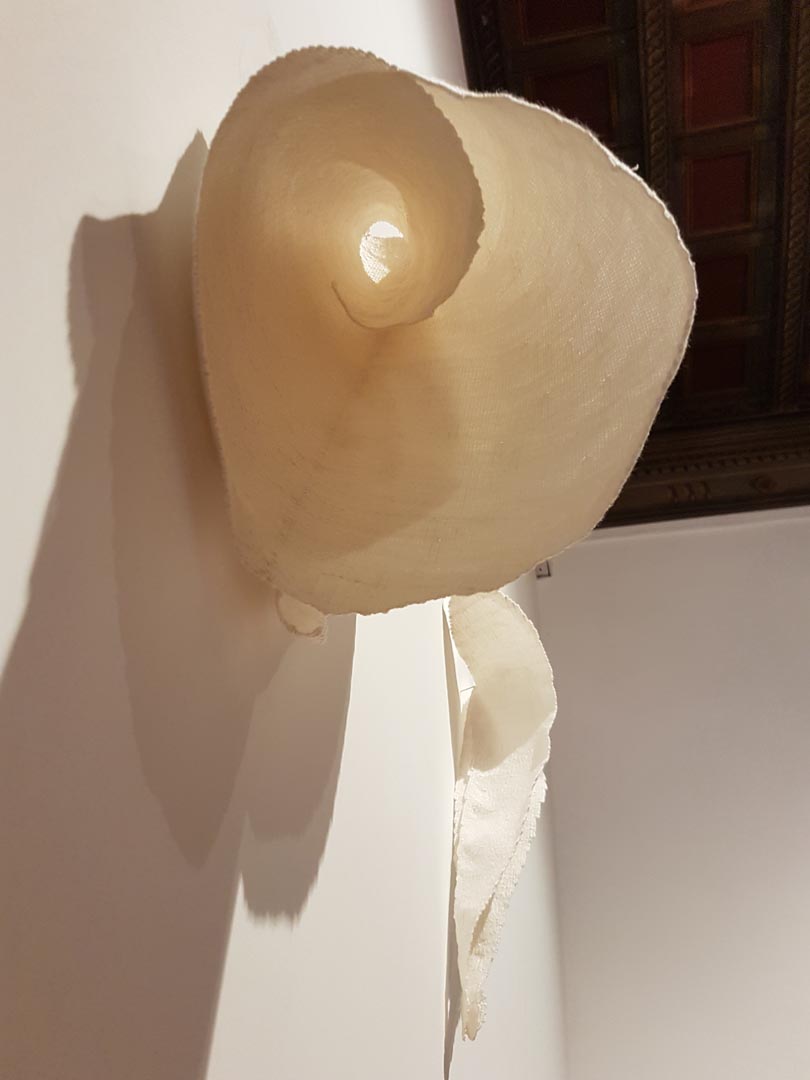 Life and danger that flow in the red of the hematite powder then cool in the darkness of the graphite in the Macramé Black Shell sculptures which, in the second room, are enclosed in showcases. Form and matter are placed on the margin between life and death, but also on the threshold of possible preservation.

Life and death also coexist in the very delicate drawing and fabric insert of Shell, del crepuscolo o dell’alba, a detail taken from the woodcut by Ichiyusai Kuniyoshi (1797-1861), a three-quarter-view portrait of Tan Onodera, the wife of the ronin, the samurai Onodera Junai. She is portrayed putting on her robe before she follows him to her death (following ancient Japanese tradition). “I was immediately interested in the form the garment folds take right at the side of the knee, highlighted by the striped pattern,” explains the artist. “I isolated the detail as if in drawing it, when enlarged, I could see it more carefully. Line after line, I unexpectedly discovered a vital, germinating line inside it. It is a body whose clothes, covering and following her curves, reveal unusual and unintentional details.

I then wanted to add a three-dimensional element to the drawing – a fragment, a strip of fabric that emerges from the cut made with a knife in the paper. From this part separated from the whole, from this interruption of the body’s continuity, because of the incision and the separation, a red thread also emerges that falls downwards as a result of gravity.”

The body and the story that literally take shape from the combination of drawing and matter and in the tiny space of a detail, emerge, in a different way, in the photographic print of the artist’s body on cotton paper – printed as a negative, removed from the detail turned upside down towards the universe, projected in the reconstruction of a star chart which corresponds to that of her body. “How many stars can be counted numerically?” asks Federica Luzzi.

“Every mole can be renamed and reproduced in new atlases with purely invented spatial formations, meridians and parallels. But although the body is circumstantial, it is not an objectively measurable geographical space.” 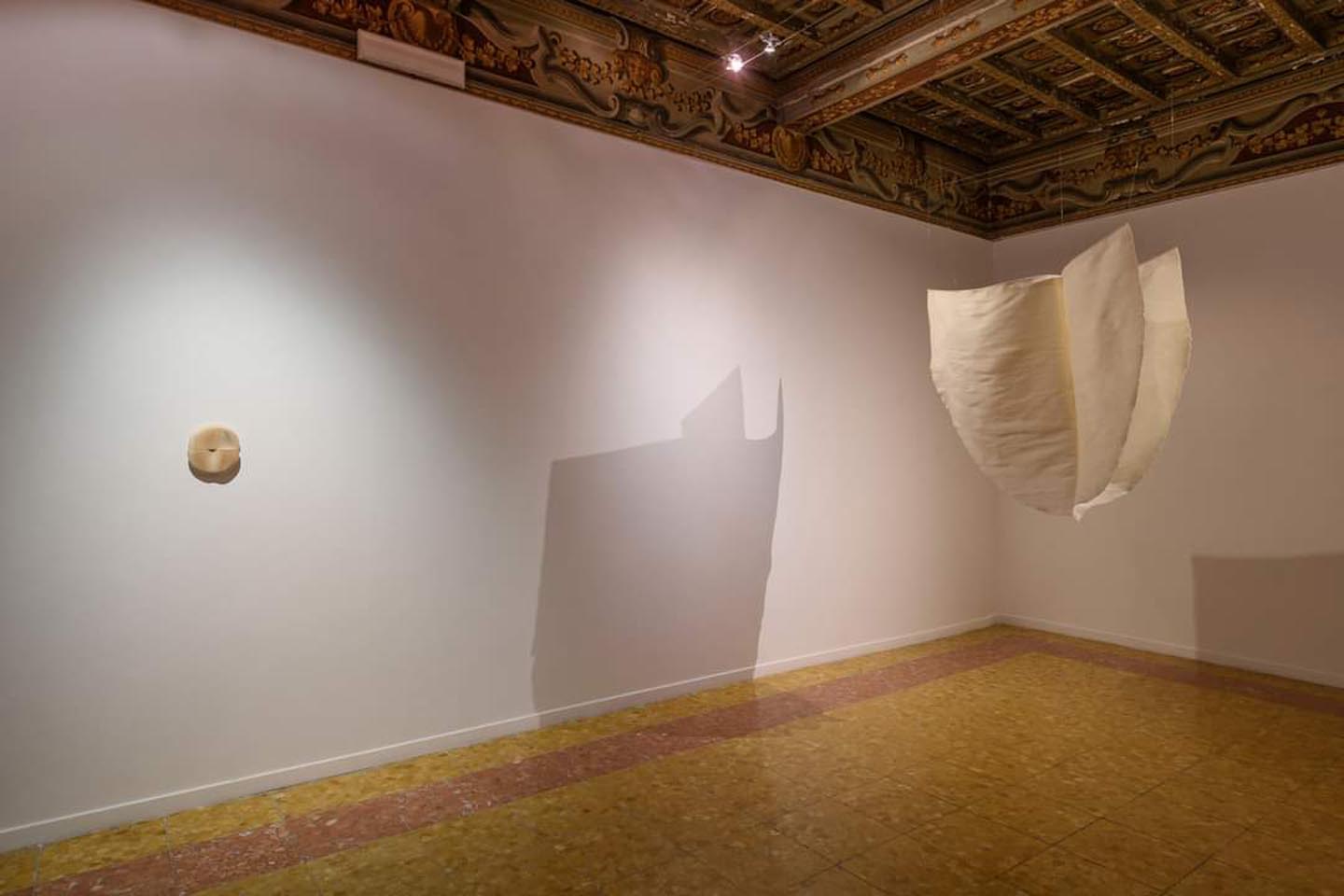 Going through a whole series of works that contain entire worlds in their material, colour and technique, we find the body and its encroachments in the large wings made of tapestry with a vertical linen-spinning loom in the large installation that occupies the last room. This time the body is not to be found in any image but rather in the strength of the weaving, in the relationship of man to machine and technique, in the fatigue of its process and its upward-leaning tendency.