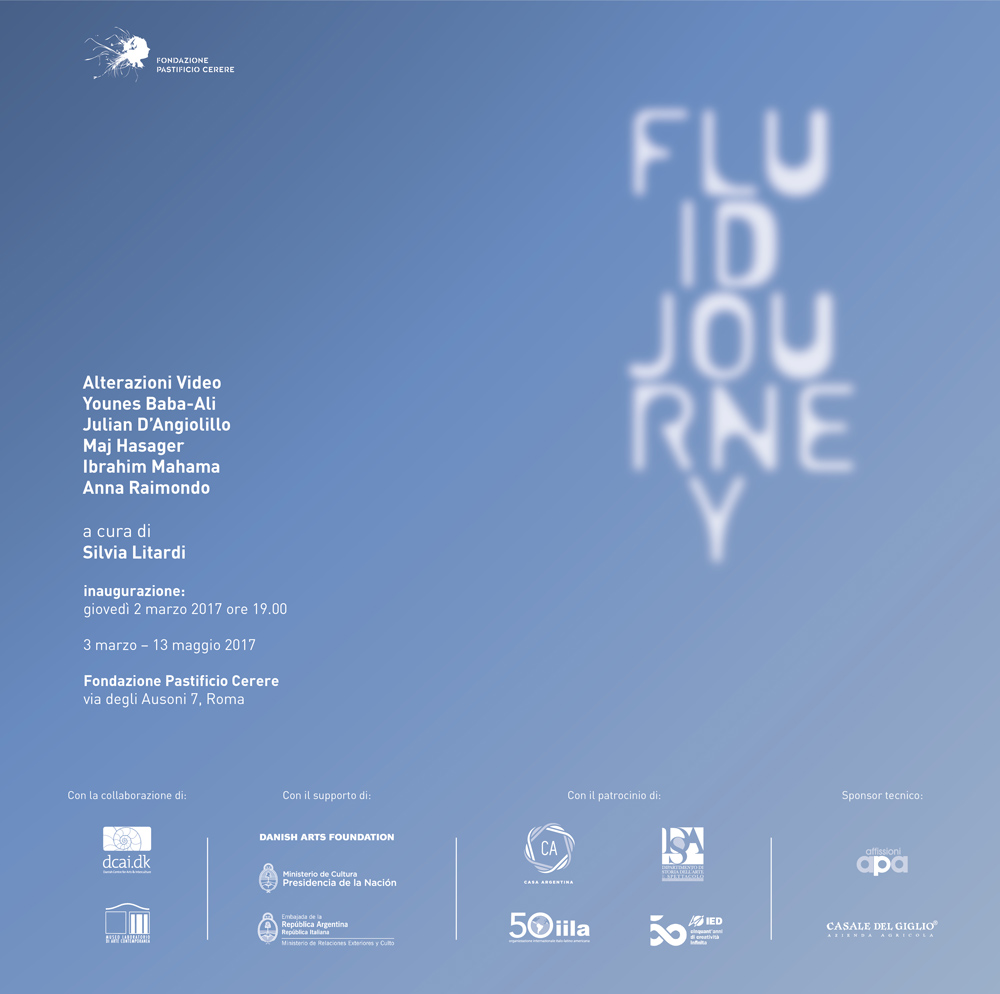 With Fluid Journey, the Pastificio Cerere presents a research project in the form of an exhibition and a conference, in order to explore “space as a semantic place for the negotiation of meaning, where the artist assumes the guise of the foreigner faced with a native culture, thus stimulating a trans-local view”. 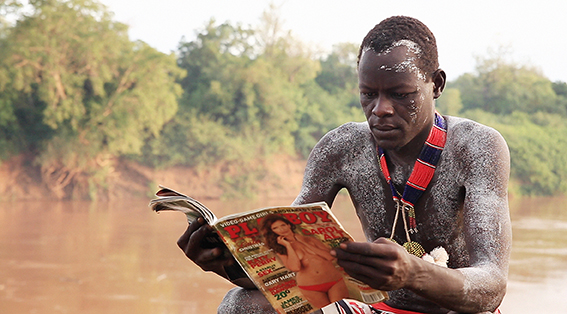 Fluid Journey is an attempt to enclose in a conceptual frame the work of artists who act as spatial analysts (Henri Lefebvre’s “socio-spatial theory”), “prioritising space as an interpretative view of the world”; as a force field in which all components act and participate in the determination of the singular characteristics of a local identity. Curator Silvia Litardi is interested in giving relevance to this particular artistic approach in the face of a contingent reality which may resemble that of the foreigner, able to grasp an urgency which is reflected in the space, and to renew the use of these places as bearers of new ways of inhabiting. The places travelled therefore take on the characteristics of “ethnoscapes” (Arjun Appadurai, 1996), where the locality influences and redefines the assumed original matrices of a cultural composition or – more simply – the fact of the landscape cannot do otherwise than fuse with the human scenario which more or less permanently inhabits it. 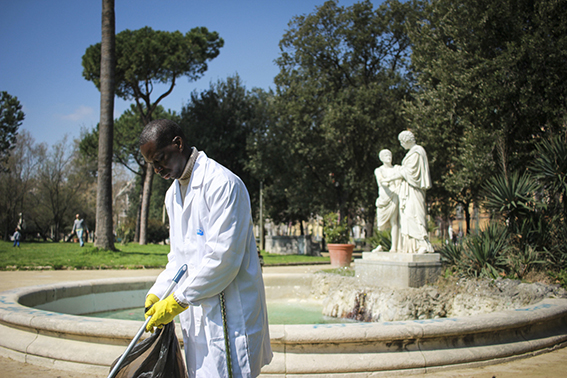 By means of site-specific projects, the exhibition itself is presented as a fluid journey among works which outline a possible cartography, incomplete and in constant flux. The view proposed by Fluid Journey is a schizophrenic one, which touches on Mussolini’s utopian “Third Rome”: the EUR district – site of Rome’s Universal Exhibition – is explored through the stories of the Filippino community in “We will meet in the blind spot” by Danish artist Maj Hasager; also on show are collages from the series “Notes on futurism, migration and a lost utopia”. 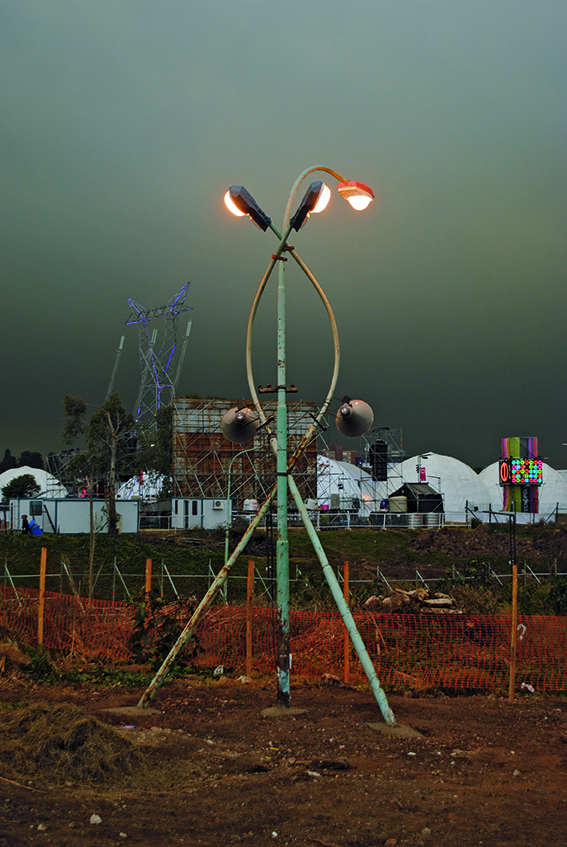 Julian D’Angiolillo (Argentina) takes the viewer to Buenos Aires during the construction of “Antropolis”, a temporary park built as a parasite of “Tecnopolis” (the technology park created in 2011 to mark the Bicentenary of the Argentinian Republic). “Antropolis” is the result of a humanistic investigation and a reflection on the urban renewal associated with Great Events. 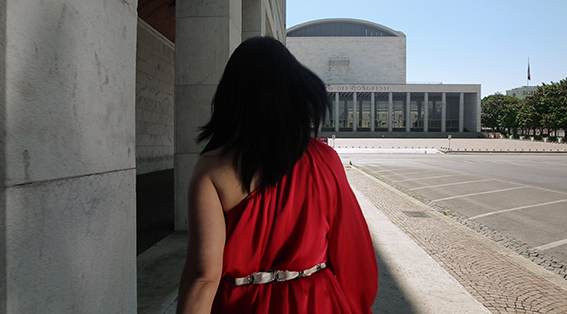 Alterazioni Video (Italy/Germany) present “Ambaradan”, the collective’s most recent Turbo Film: an aesthetically pop yet extremely lucid vision which reveals the unsaid regarding a geo-political tragedy unfolding in Ethiopia to the detriment of local communities. 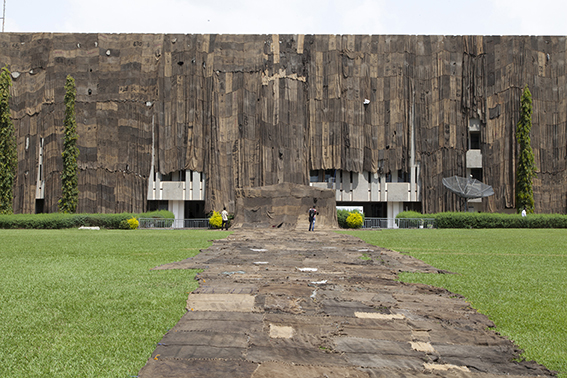 Ibrahim Mahama (Ghana) lives and works on the west coast of Africa, producing imposing installations made of jute sacks on disused buildings in Kumasi or Accra, symbolising post-colonial economies: the exhibition includes the video “Self Occupation”, a kind of aerial overview of the artist’s large-scale works, and an assemblage of sacks made of jute and other materials.

“Pulizia” is the main project by Younes Baba-Ali (Morocco/France/Belgium) in this exhibition: a fictitious cleaning business whose logo – similar to that of the Italian police – was printed on white uniforms worn by migrants living in Italy, invited by the artist to sessions of cleaning in public places; the inverted view of who controls whom, who takes care of whom, calls Italian immigration policy into question. 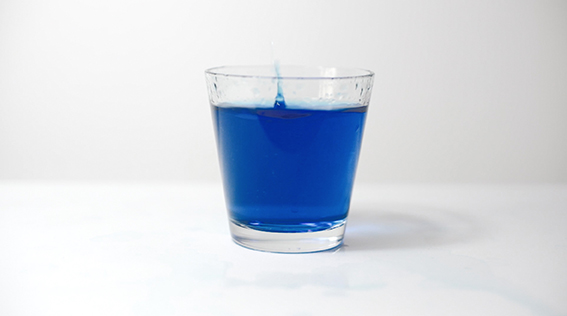 Drop by drop, a glass is filled until it overflows, while the voice of Anna Raimondo (Italy/Belgium) repeats the mantra Mediterraneo, Mediterraneo, Mediterraneo… During the time the action takes, and as it blends with the water, the voice fades and the words become unintelligible. With the video “Mediterraneo”, the artist – who is stateless by vocation – offers herself as a metaphor of ubiquity, a witness to travelling cultures, to an anthropology centred on the experience of the never-ending existential journey in search of the openness and change which also guided the research project underpinning Fluid Journey.