Artist Allan Kaprow (1927-2006) was an exponent of Abstract Expressionism during the 1940s. He coined the term «happening» at the end of the 1950’s to suggest a form of artistic expression that applies to the creation of situations devoid of structure, a beginning or an end, where one can participate actively and where the experience of the public becomes the central aspect in order for the work to acquire meaning. It’s not as if this were some kind of radical novelty since similar experiences had already been recorded in Dadaism, Futurism and Surrealism. It was, however, the first time that this type of experience had been acknowledged with a term by which it could be placed into an authentic artistic genre of its own. What actually did become increasingly acknowledged was the way art approached life and the way the two were united by an osmotic exchange, feeding off one another as the result of the shared experience. A few years later, Kaprow revealed the following in an article: «Happening is rough and sudden and often feels ‘dirty’. Dirt we might begin to realize, is also organic and fertile, and everything including the visitors, can grow a little in such circumstances.»1

So, the people invited to the loft of New York’s Reuben Gallery for 18 Happenings in 6 Parts back in 1959 were given a programme and a set of instructions as to how to behave. It included indications of where to sit, how to move and when to applaud. These guests witnessed a series of «happenings»: painters painting, lectures, musical performances and performers enunciating monosyllabic words such as «but» and «well». The end of each happening was marked by the sound of a bell ringing twice. Applauding was only allowed at the very end – after about ninety minutes of all kinds of situations. It was considered very trendy to attend one of these events at the time. In fact, once this type of creativity became popular, it was Kaprow himself to repudiate the term. 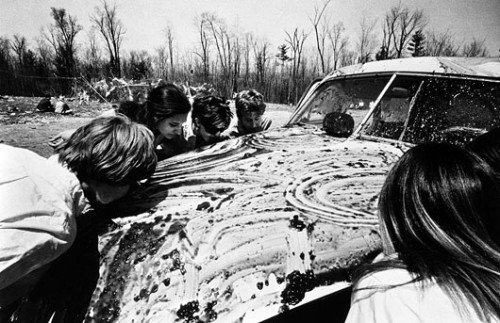 Now, what could possibly be the connection with the most current form of media art? Well, the connection is a very strong one and it is found precisely in the changes of the forma mentis that was being established those many years ago: by allowing art to be absorbed into everyday life and, above all, by holding the observer responsible and actively involving him or her with the work as a fundamental element. These changes in mental and behavioural attitudes belong to the world of technology and have become increasingly more accentuated right up until now when experience and interactivity – for as much as these aspects have changed regarding the degree of visitor participation (which is increasingly more active) – are often «vital» components of the work’s «being».