(Inside Voices) by Iginio De Luca

Through technological modernity, it is possible to expand the syntax of creative language, modifying its experience. Sounds can be expressed and drawn from contexts and objects, not normally related to any auditory sensation. It seems that Iginio de Luca (Formia, 1966) took up this possibility. In his project Le voci di dentro (Inside Voices) at Trajan’s Market – created for Live Museum, Live Change and curated by Maria Francesca Guida – de Luca addresses the dimension of history and memory in a contemporary mode. From inanimate and soundless material, new opportunities for use are opened up by establishing an intimate physical relationship with surfaces. 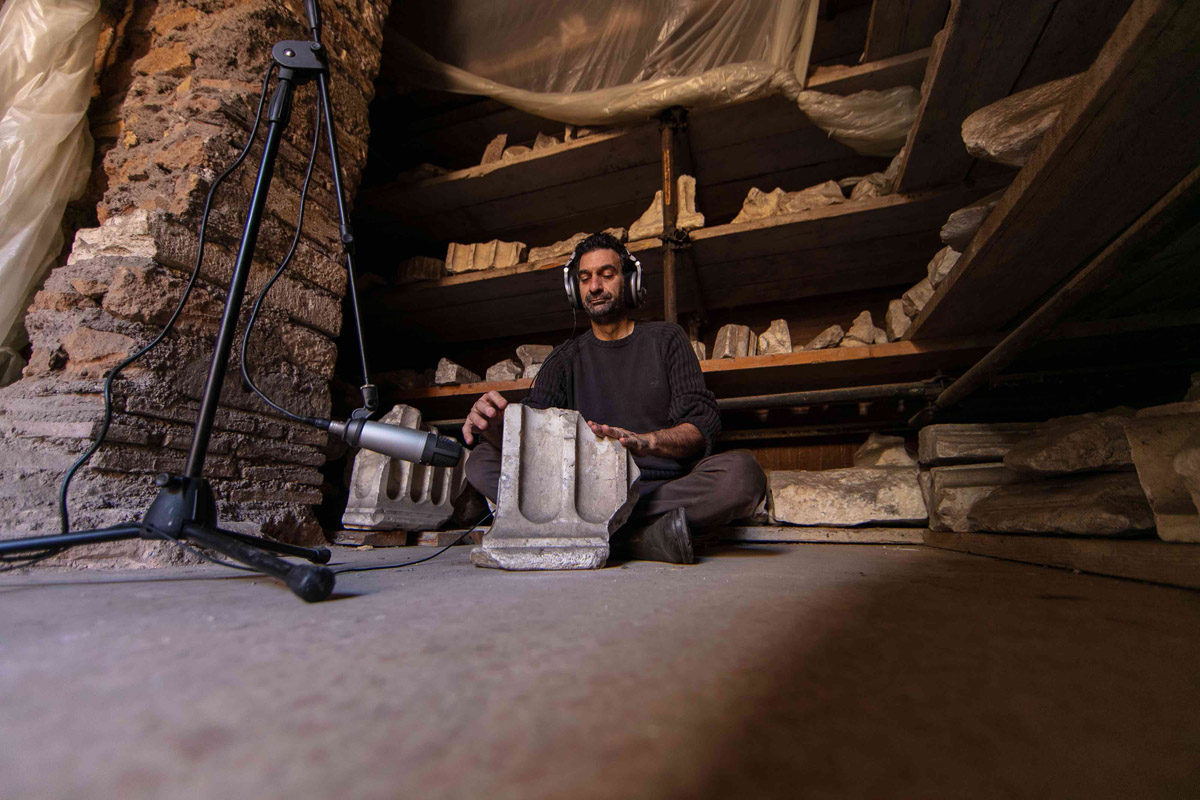 The finds, the marbles crammed into the dedicated spaces of Trajan’s Markets in the Imperial Fora form part of the work conceived by Iginio De Luca, in both a material and conceptual way. The Museum preserves a detailed historical fabric on different levels, the remains of eras that are a fundamental part of the collective heritage.

The marble sections acquire a new reality thanks to the action that the artist himself endows, through hand contact, to that which represents the new condition and existence of these inanimate stones. Starting from a decisive relationship with the place, artistic research and practice takes on a new form and identity for an intervention where sound derived from matter becomes the beating heart. 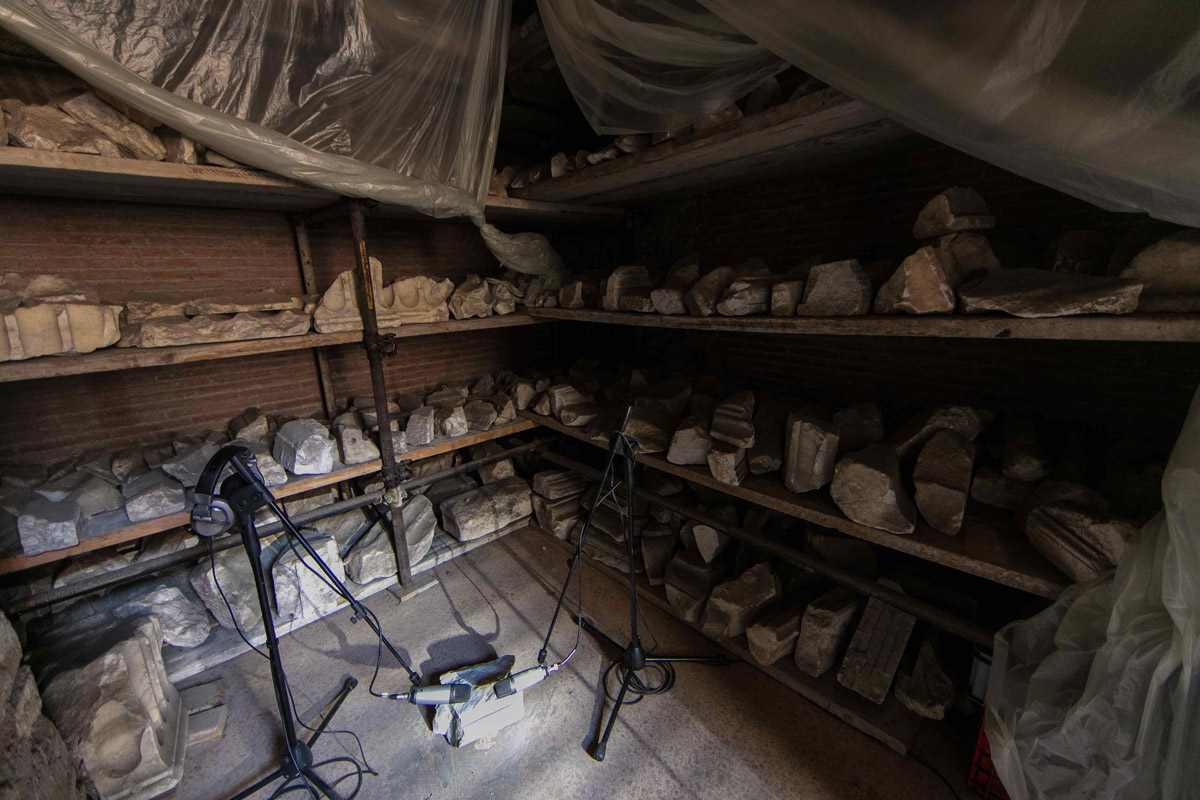 This is a site-specific project that involved the recording and amplifying of sounds, the making of a video, together with an audio file that is a piece of music in its own right. The guiding principle is the relationship between past and present. The original fragments, casts of columns and parts of architecture from imperial times, collected for conservation purposes and available for public viewing, contribute to De Luca’s project in a timeless dialectic. The transmission of a symbolic language expressed in a soundtrack that, through technological elaboration, activates a sensorial stimulus acting as an emotional experience. The sound is absorbed by the microphones, amplified and returned through loudspeakers that diffuse soft, high vibrant sound waves; unexpected “musical” outcomes. 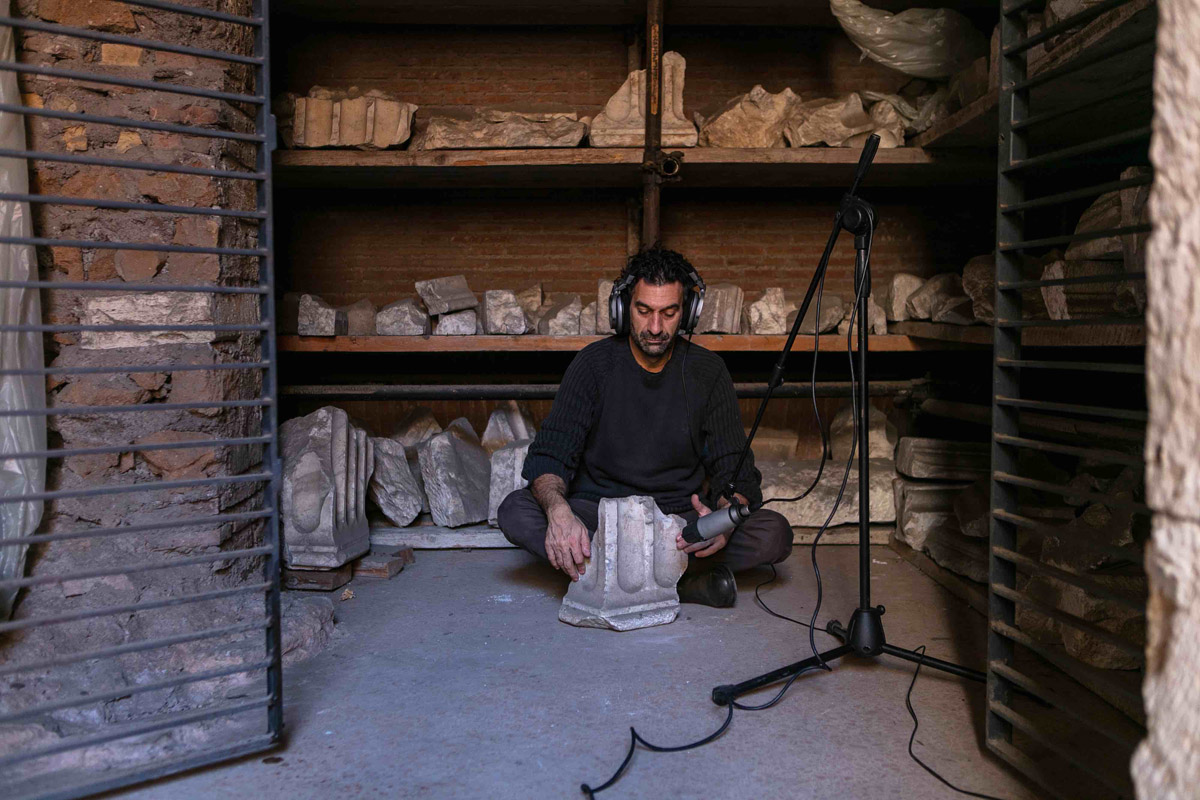 In the elaboration of contemporary language, with all the complexity of the medium’s use and its reconfiguration, and in the conceptual relationship between the past and technological transformation, a new creative reality emerges from the archaeological piece, from space and history. The inspiration, according to the artist, as a result of seeing these ruins in the majestic context of the Markets, a fascinating environment always full of new perspectives, even of the city itself. If in De Luca’s artistic practice, sound has a symbolic or disorienting connotation, in this project it becomes even more sensitive, produced by the relationship between the place and the emotional movement exercised on the ruin, which acts as a living, beating medium. A new, intense condition of use comes into being, entering deeply into the paths of memory; in a dialectic with the nature of the archaeological site, containing new realities developed by contemporary artists in alternating artistic ateliers.

Trajian Markets, Tome  (at the moment the visit are closed to the public due to the coronavirus emergency)