Nessuno Escluso (Nobody Excluded) in Naples

Elena Giulia Rossi: How and when did the project Nessuno Escluso (Nobody Excluded) start?

Bianco – Valente: Six years ago, the design studio that was working on the redevelopment of the Via Marina coastal route asked us to imagine a site-specific work to be installed in this area, but it was only last year that we really got to work on the project with the contractor and the town council, who suggested we worked on a large pre-existing circular structure which, with our intervention, we could transform into an ideal gateway to the city. The work was financed with a law allocating 2% of public building contracts to art.

What led you to define the concept of this intervention?

Pasolini, Umberto Eco and several other intellectuals recognised that the city of Naples does not always conform to global trends or, at least, does not endure them passively.

This territory, thanks to the series of historical, urban and, above all, social conditions characterising it, is a powerful generator of the imagination which, fed by utopian visions, asynchronicity and profligacy, manages to generate avant-garde movements in music, theatre, cinema, literature and art.

However, there is a radical transformation taking place, due to the commodification of the city for tourism and the consequent gentrification process undermining the complex social fabric that has animated its streets for centuries.

In the long run, all this will make Naples a victim of its own stereotypes, progressively undoing its ability to generate non-homologous visions in culture and the arts.

For us, Nessuno Escluso (Nobody Excluded) means safeguarding the opportunity for disadvantaged groups to continue living in the city centre. It means investing in schools as a priority, so that everyone has the chance to get the best possible education, and it also means keeping alive the capacity to welcome other cultures, to transform and change – features that have distinguished this place since it was founded 2,500 years ago by Greek colonists. 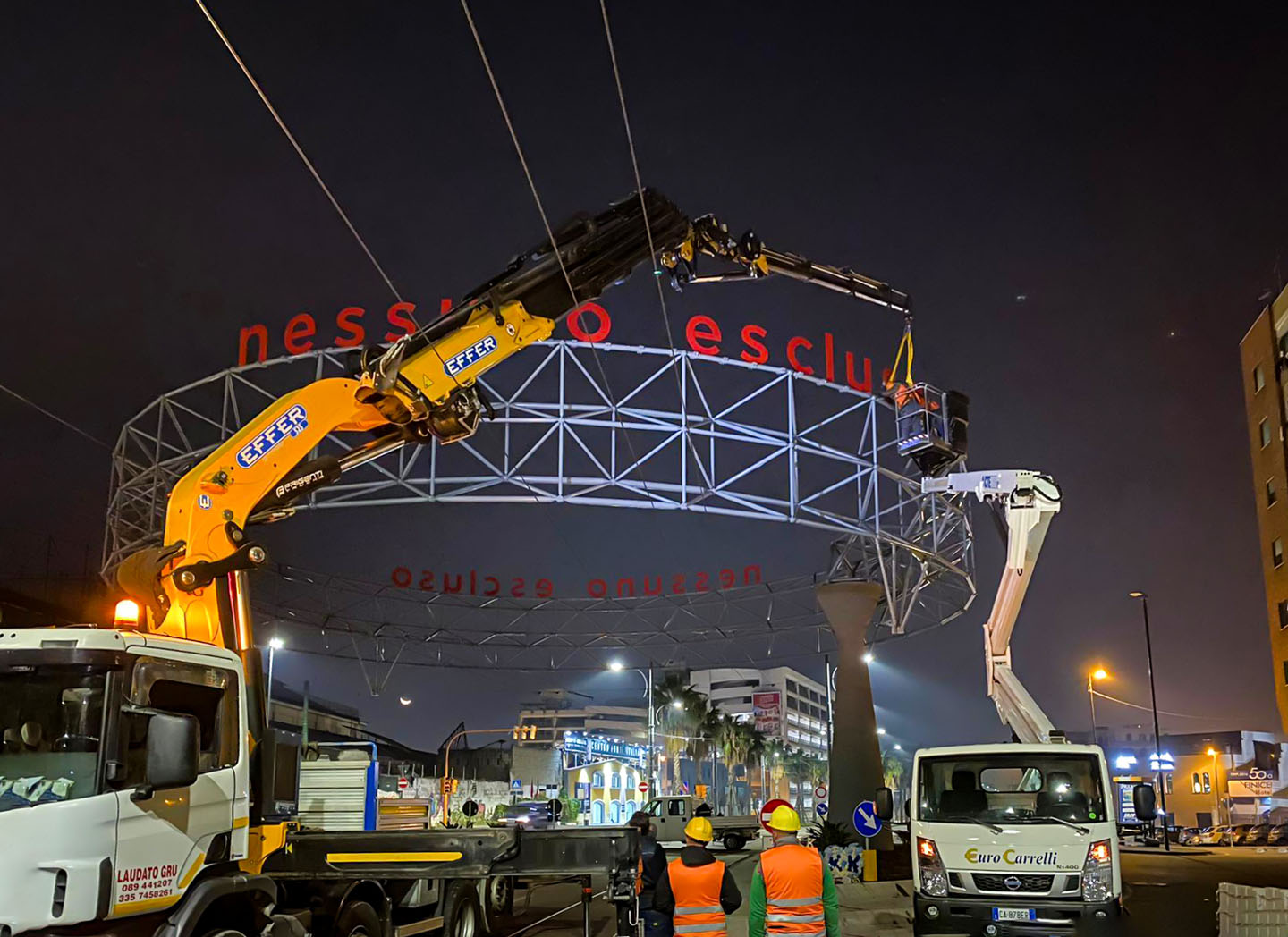 Can you describe the landscape surrounding the work? Is it a specific location in Naples?

The entire coastal route is the crystallisation of visions and strategic choices made over the last 150 years, which have turned out to be completely mistaken, with the people who live in the city still paying the price today.

Kilometres of breathtakingly beautiful coastline have been taken away from the city by a wall that was built to shield the port, the ruins of old industries, a power station and the railway line that still runs parallel to the coastline.

Inhabitants of entire city districts, who could enjoy the sea just by crossing the road, are forced to travel dozens of kilometres to do so.

We are in the strip of land located between the slopes of Vesuvius and the sea, breathtaking scenery, fertile land where the Royal Palace of Portici was built with the so-called Golden Mile, overlooked by enchanting Vesuvian villas and the archaeological excavations of Herculaneum.

A priceless cultural, architectural and landscape heritage, barely emerging from the surrounding degradation. An enormous waste.

For several years now, your interventions have specifically focused on public spaces…

We are passionate about the idea of art that can be freely used by people, without restrictions, without guardians, works that are designed for a specific place and a specific community, while still managing to have universal significance.

There is no simplification or complacency, but rather an invitation to look at the context from a different perspective, to break, if only for a few moments, the everyday rhythm of life which seems to take place and simultaneously disappear.

Bianco-Valente (Giovanna Bianco, Latronico, 1962 and Pino Valente, Napoli, 1967)
We live in Naples where we met in late 1993. We started our artistic project by investigating the body-mind duality from the scientific and philosophical point of view, the evolution of the models of interaction between life forms, perception, the transmission of experiences through storytelling and writing. After these studies there has been an evolution that aims to make interpersonal connections visible. Examples are installations set up on various historic buildings and other projects focusing on the relationship between people, events and places.
Since 2008, together with Pasquale Campanella, we have been curatine A Cielo Aperto, a public art project developed in Latronico (Basilicata), pursuing the idea of working on the construction of a open-air museum in which several permanent artworks interact with the montain environment, and to intervene in the urban space with shared and participatory projects.(Bianco – Valente)

WE NEED A GOLEM

WE NEED A GOLEM