Were there positive exchanges between artists and buyers? What kind of audience responded?

ML: I replied to this above. But in relation to your question about ‘qualifying’ the exchanges, I would say that the majority of them were productive exchanges. In a few instances they also led to actions that triggered collaborations that shifted the relationship between artist and buyer, artwork and viewer, authorship and making, curating and being curated. Apart from the instance of Guido Segni—invited by guest curator Domenico Quaranta—who appropriated the work of JODI, BESTBUY JODI ON EBAY (from #exstrange auction), to then sell it as a double ‘authored’ artwork, JODI’s EBAY shopping bag, the work of Garret Lynch, ART, LIMITED EDITION, PRINT | Auction action – commission an artwork, turned the winning buyer into a commissioner. The artist—invited by guest curator Gaia Tedone—used the amount paid by the auction winner “to employ other services sold on eBay to produce and customize items that then he assembled as an artwork”. With Drawing Conversations, Gagan Singh offered to have conversations with his buyer that would lead to the collaborative creation of drawings representing their encounter, putting a stress on his interest in becoming “the buyer’s thought”. One of the 11 guest curators that participated in the project, Tedone, also decided to create her own auction, Curatorial Consultancy with Cassini on #exstrange. She offered an ad hoc consultancy service based on her ‘collaboration’ with the Cassini algorithm, which also led to the creation of an additional auction by Alessandro Sambini, Portable Wildlife Image Instance. 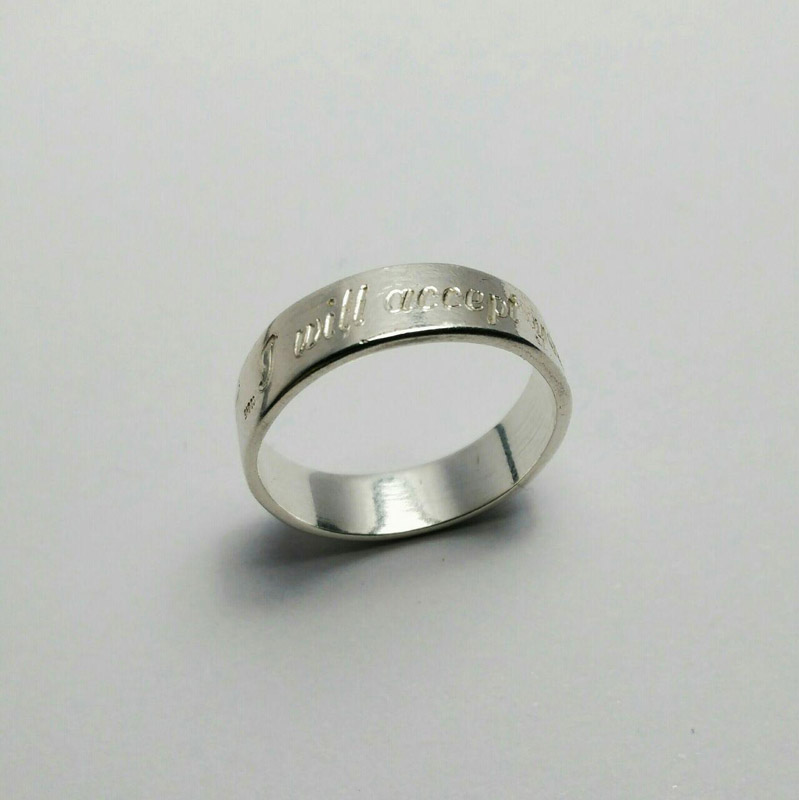 RM: Continuing with examples of artistic collaborations that grew out of #exstrange, LEXX Exhibitor Space with Fernanda Palomino and Marek Wolfryd launched Concession Carts with the intention of selling a food cart for an artist to use as a creative intervention to “circulate ideas” as other carts distribute products. Instead, the winning bidder (located in the USA) proposed to rent the vehicle to co-curate a 12-month period of “cycle-driven” exhibitions, performances and actions in in Cholula, Puebla; LEXX will retain ownership of the vehicle, house the cart, and facilitate encounters on-site. This was a great example of a negotiation between bidder and seller that deviated slightly from the original intention, hopefully for a more substantive, international exchange.

Artist Eno Laget’s Porch Jesus led in an unexpected direction. He created the artwork as a political and slightly humorous response to the anxiety over gentrification in Detroit and the first hundred days of the Trump presidency. Purchased by a local family, Laget delivered the sacramental to Kate and her husband Tony, a homebound veteran suffering from ALS. Kate told Laget “she wanted the Jesus because having it makes her home more of a sanctuary, an isolated but safe space where she spends most of her time caring for Tony and the children.” When asked why she bid much more than the asking price, she answered “I need to surround myself with things that are beautiful and give me hope. It was worth much more.” Laget was profoundly moved by the family and their conversation and donated all the money to the Southern Poverty Law Center. 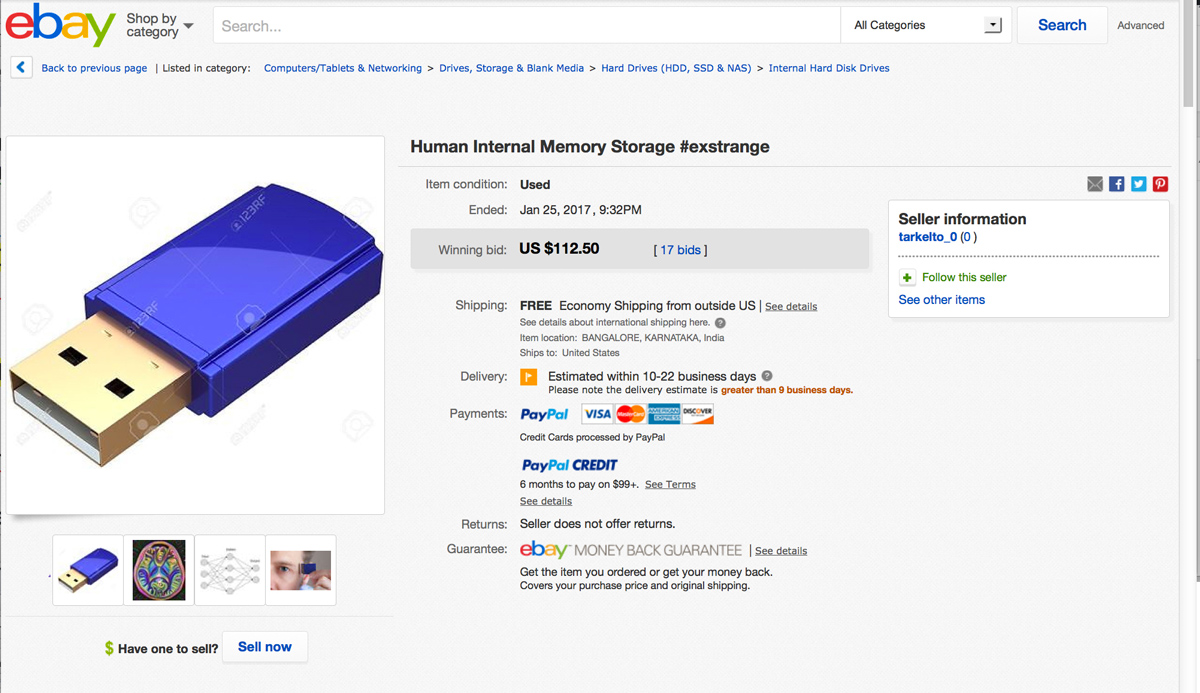 Can you give us examples of works that have shaken the different faces of the economy, as price of exchange between the gain of the purchase-resale transactions and the (un)aware acceptance of terms of online service that can be read as an auction operation of a complete lifetime?

ML: Quite a few works pointed at how terms and conditions are often overlooked in our everyday use of online services. I will accept your terms of service by Huaqian Zhang—invited by guest curator Bani Brusadin—brought this aspect to the forefront by selling a silver wedding ring with the engraving “I will accept your terms of service.” The artist offered a physical reminder of how we all blindly accept the presence of Google and other online services on a day-to day basis. Yastika Shetty, one of my students who I invited to participate in the project as part of a class, offered the buyer an opportunity to appropriate an identity by ‘adorning’ it. She put up for sale items that belonged to her and contained some of her biological traits, such as a lock of her hair. The work, This Identity, commented on government programmes of digitisation which by evaluating biological traits, reduce an identity to a set of information that can be read by algorithms. The work of Robert Sakrowski, video – webwork as web.pilgrimage for #exstrange, offered an insight into how the actions we perform online are often a form of labour that is non-quantifiable and often overlooked, while also becoming a medium that feeds back valuable data into algorithms and thereby into the very same services one uses. Another work that also looked at (un)valuing creative labour was that of Carlo Zanni, Life Is A Delicate negotiation, 2017. 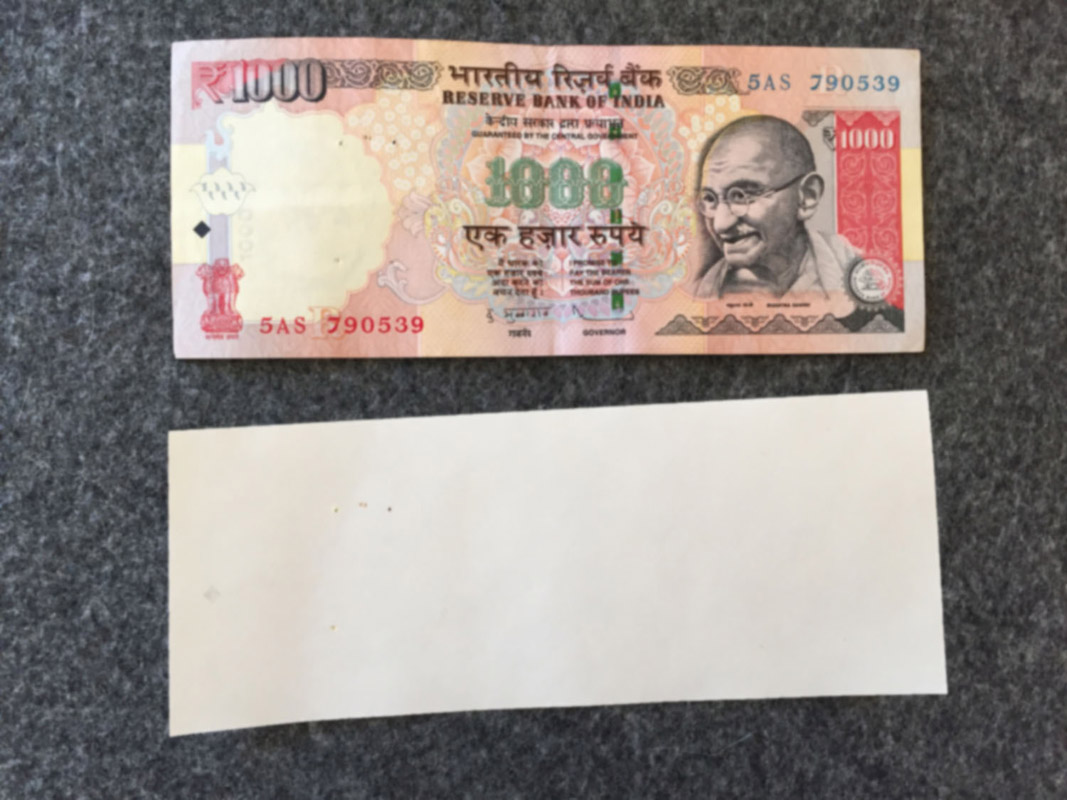 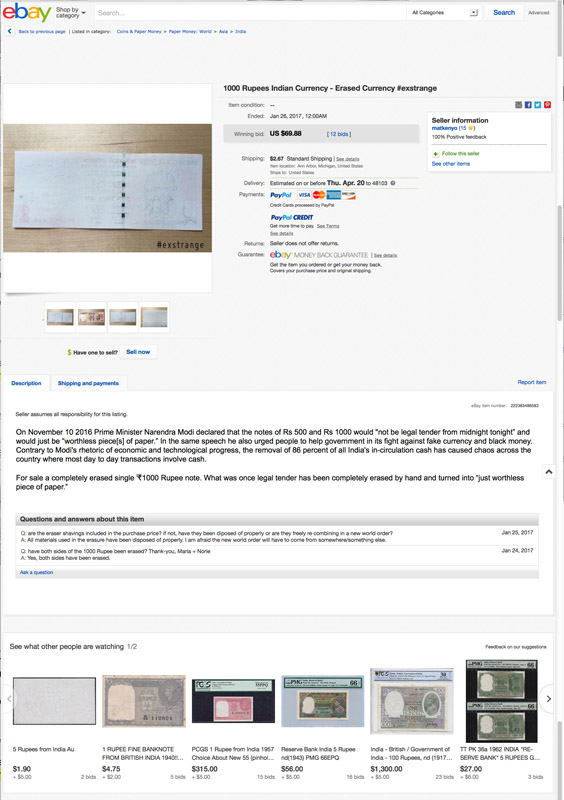 RM: In that work, Zanni used FBI negotiation techniques based in developing empathy, to walk through the challenges of participating in a show without funding. In a sense, we, as curators, were the audience for this work, along with artists facing the same dilemmas and collectors who may not understand the valuation of art.

A work that comes to mind here is Mary Ayling’s LongFormRelationship (LFR) Network, which is a lifetime commitment to a network of one (Ayling), using “slow technology, i.e., pen and paper. Ayling sold three networks, one of them for $0.01, whose shipping costs cover the cost of only one letter, not 53.12 years of correspondence. Ayling’s original pricing had accounted for her full expected lifetime of postage, but she willingly shifted to $0.01 because the work was part of a consumer choice study that required a low starting price. Ayling told us: “depending on how our correspondence goes, one of us will end up having invested more than the other in the end. Which seems to be the way it is with most commitments. In all honesty, I am terrified of this project. Will I be a good communicator for life? What are their expectations, what are my own? Will these networks be beneficial or detrimental? Or neutral? Today, I cut short a lunch that my partner and I were having with one of his potential new bosses because I was committed to making it to the post office to send John’s [winning bidder] letter on time.” 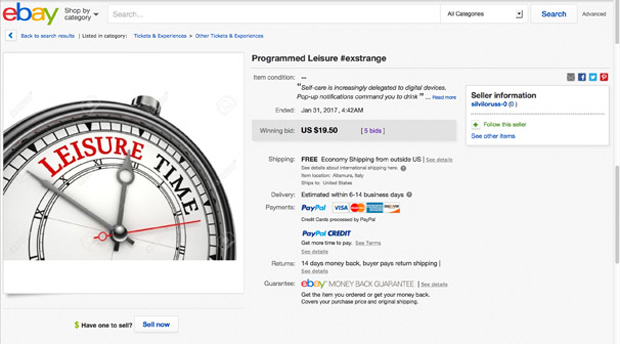 How is proceeding #exstrange and how do you want to develop it?

ML: The last auction of #exstrange is Your Own Named Exhibit Within the Museum of Capitalism by FICTILIS which was posted on the 4th April 2017. It offers the buyer the opportunity to purchase the naming rights to an exhibit; an exhibit designed and created by the artists themselves whose budget will be the amount of the winning bid. Over 60% of the artworks were sold.

RM: We are now working on the #exstrange book that will document all artworks and exchanges, including a map showing the path of transactions. The book will feature commissioned essays by writers such as Padma Chirumamilla (writing from the perspective of technology), Mark Dery (related to culture jamming and art), Lawrence Liang (intellectual property and public domain), Gaia Tedone (curatorial studies), Rob Walker (the marketplace), and Renee Carmichael (the choreography of eBay as a platform). The book will be published and available in June 2017.

This is the second part of the interview by Elena Giulia Abbiatici to  Marialaura Ghidini e Rebekah Modrak. Please click here to view the first part.

#exstrange is a live exhibition platform for all those who would love to use eBay as an ideation, production and distribution channel, that invites to think about digital commerce not only as a sales tool but, in particular, as an activator of relational processes. #exstrange began with Marialaura Ghidini and Marialaura Ghidini Rebekah Modrak’s curatorial invitation to 21 artists to launch a 7-day artwork/auction. One of these auctions launches every day, beginning on January 15, 2017. The next stage of the show started on February 5, 2017 when guest curators based across the globe invite three artists each to participate in the exhibition.