Weather as Medium is a book and an exploration of artworks that use weather or atmosphere as the primary medium, toward a meteorologica art

Last year, the artist and theorist Janine Randerson, active in the field of research into art and climate from completely unsuspecting times, came out with Weather as Medium, a book published by the prestigious publishing house MIT for the Leonardo series. “I treat the weather as a lively provocateur, collaborator, and catalyst for vital ecocritical conversations” From this assumption, Randerson crosses the relationship between art and climate over time, starting with a broad and documented introduction to the relationship between art and climate in tradition: the use of the elements in the practise of rituals as well as in art, as well as its nature as a ‘subject-object’ shared between art and science. Weather becomes a ‘creative tool’, towards a type of meteorological art, as the title of the publication itself says, and comes to focus on works that use data provided by science, and mediated by scientific instruments, the latter being the object of great attention by the author herself, who elects them as ‘compelling entities in themselves‘ (p. 44). In the selection of works and topics, Randerson believes that attention to the local is important. Many of her stories testify to experiences of indigenous communities in the Global South (particularly in Aotearoa in New Zealand, where she conducted a residency project) that merges and flow into the global debate. 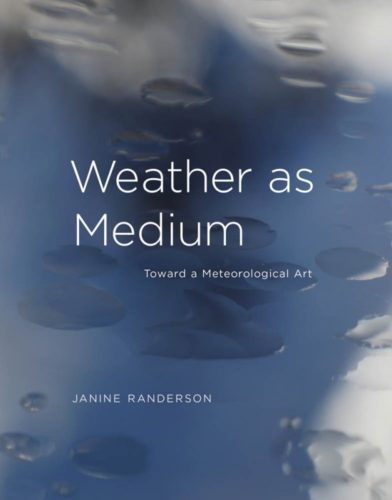 The projects of Hans Haacke, David Mendalla and Walter De Maria are among the historical works that raise the curtain on weather as a ‘vehicle of transformation’. Each one offers a different angle, all highlighting the role of the public: the public present in the physical place, as well as the public that assimilates the works mediated by the various distribution channels. In retracing the Fluxus works that employ weather as a medium, she identifies Cloud Music by R. Watts, David Behman and D. Diamond, where the passage of clouds was transformed into sound by an algorithmic process, as pivotal reference in between late modernist meteorological art and the latest digital developments.

In the digital age, the visualisation of data becomes crucial. The consignment of this data to the public is made possible by ways of thinking and acting that are in turn aimed at contributing to great changes. On the other hand, visualisation is persuasion (Latour, 1986) and Randerson agrees with his thinking and vision about visualisation historically, she argues that contemporary artists politicize and transform the same weather data that drives the technosciences. Art interposes itself in the interstices of these visualisations, offers different points of observation, and prepares for a critical look at things.

The practice of data sonification (Andrea Polli, Phil Dadson, Joyce Hinterding and Daid Haine); research on the role of instrumentation, such as that conducted by Randerson herself, Marco Pelihan, and Anaïs Tondeur, the use of ice as an empathic tool, the call to an active participation with more explicitly expressed activist works, are some of the ways of appropriating the climate through the data that express it.

Randerson does not neglect what has always proved to be of radical importance in the transition from one era to another: speculative storytelling. What happens when we reimagine our meteorological future? This is the question that gives form to the understanding that closes the book and opens up to future continuation. The book, brimming with examples, therefore launches a direction to take, a path traced in the furrow marked by the need for dialogue between art, science, indigenous peoples, human and non-human. “Art – concludes Randerson – invites us to think about the origins of the technical image. As visualizations become an increasingly natural part of our environment, we need to attend to their conditions of production”(p.59).