Konrad Zuse (1910 – 1995) was the initiator of the first program for computational machines to be based on the binary logic. Its application lead to the construction of his his first prototypes, named called Z1, Z2, Z3 and Z4, and built between 1936 and 1945. Part of this work took place in his apartament in his Zuse’s biography, part was developed during the Second World War, in the Henschel aircraft laboratories. Overall his invention moved along in “almost total intellectual isolation”, as claimed by Prof. Raúl Rojas. In Henschel, in 1940 he developed two machines which could automatically measure some parameters of missile wings, transform the analog measurement into a digital number, and compute a formula based in this values. The prototyes Z1 and Z2 were basically logic design models, whereas the Z3 implemented the first two models by introducing the electrical components.The Z4, installed in Zürich in 1950, was the first commercial computer in operation, anticipating the UNIVAC delivered in the US A a few months later.

Much more you can browse in the Konrad Zuse Internet Archive, an online archive where to find reproductions of original documents, including technical drawings, photographs, manuscripts, typescripts. The originals of the digitized images are stored in the archives of Deutsches Museum where they can be access upon special request. 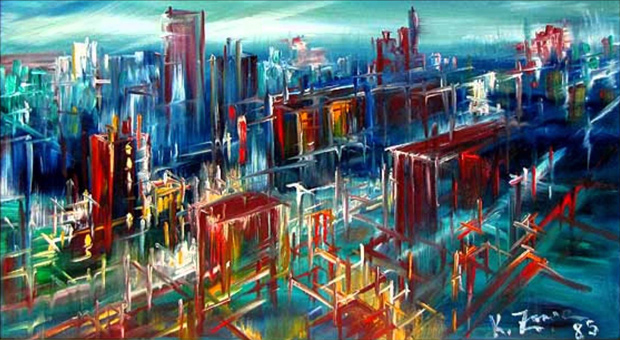 His passion for mathematics and for logics was manifest, on the first place, in his interest towards architecture, and in his natural versatility for drawing and for painting. His works were depicted last year, on the occasion of DOCUMENTA 13, one of the most important art events on a global scale that takes place in Kassel every five years. What is really important for us is to pay attention to the way invention and creativity move forward in parallel directions towards a common end.