Instructions for living in the city. Work and research on urban space 1969-2017, curated by Italo Tomassoni, Giacinto Di Pietrantonio and Giancarlo Partenzi outlines La Pietra’s multiple research strands by group and theme, presenting his most important works and documents related to urban spaces.

La Pietra’s work has always been connected to the places in which his art is situated – art of the territory and art for the social. Two urban installation projects are therefore located at the beginning of the exhibition. These are monuments dedicated to one of the most important events in Foligno’s history, the creation of the “First Print Edition of Dante’s Divine Comedy”. Twelve research areas are introduced by “Instructions” which help visitors better understand the exhibition providing a key to read the artworks on display.

Through one hundred two-dimensional works, videos, three-dimensional objects and one installation, the exhibition develops thanks to sections rich with visual influences. “Open House” is a staircase structure installed at the centre of the exhibition, the furniture made with a technique the artist calls “Planning Reconversion”: elements of street furniture transformed into household furniture.

The exhibition Why does the sky above belong to everyone and the earth below does not? presents Giuseppe Stampone’s recent work and focuses on several key themes: the expansion and re-appropriation of our own intimate time. This is achieved through multilayered drawings of iconic images made with black, red and blue BIC pens. These images are taken from the internet and redeveloped into single pieces, a process of defiance against the frenetic time-space dictatorship in which we are immersed. There are also contemporary reinterpretations of historic paintings, denouncing the migration crisis and extreme worldwide poverty. The struggle for a global education is explored through maps, tourist guides and spellers, inviting visitors to reflect on current themes such as migration, access to water resources and war. 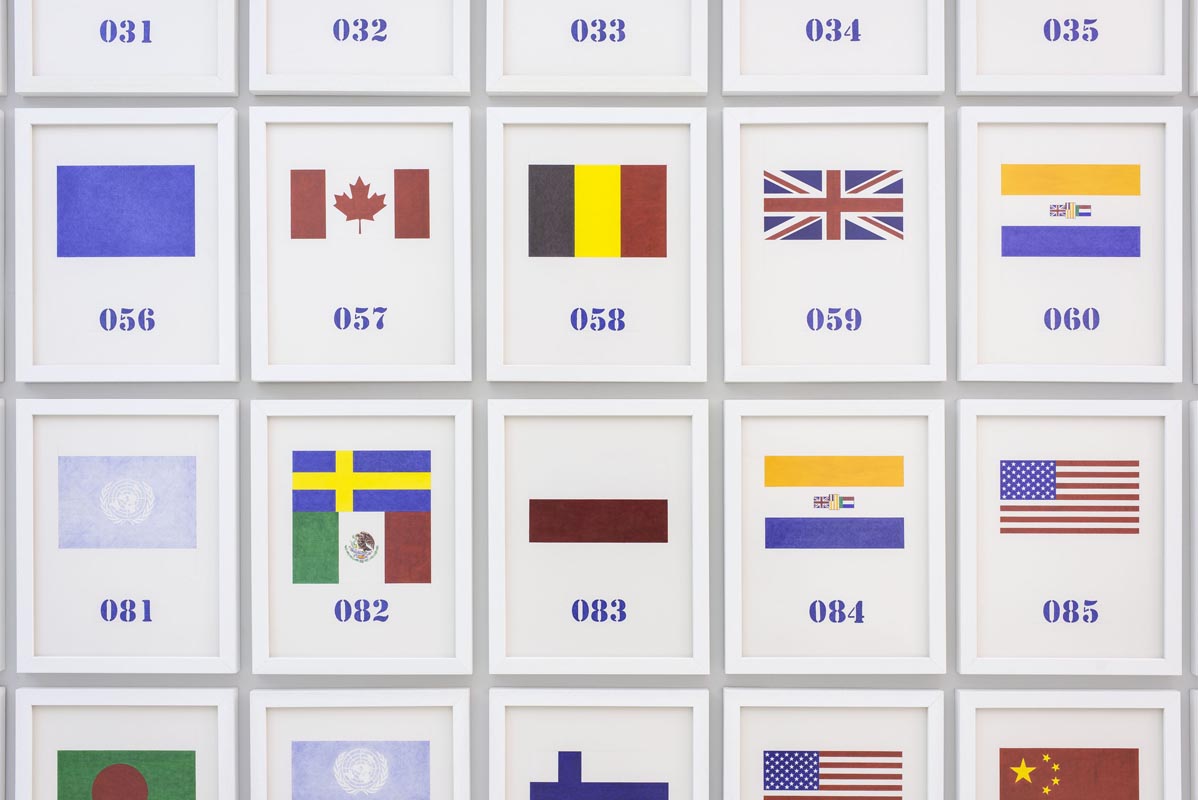 The exhibition includes the following works: P-W Peace and War, an installation 13 meters in length and displaying 114 flags meant to represent all the different countries that have won the Nobel Prize, which exposes the power logic at the heart of the most important international prize; the table Origine du monde, a reworking of Rembrandt’s The Abduction of Europa emphasises the failure of the Arab spring and the new wars of religion. There are also twenty drawings from the cycle 20th Century Dictators, created with images taken from various international magazine covers redesigned and placed in a contemporary ironic setting; a huge map divided into twelve 1 sq. meter shapes, made with iconic images taken from every country in the world; the new canvass Why there is only one sky when the earth is broken into lots of pieces (a sentence by Rodari), which is made with a BIC pen and updates the 1492 polyptych Donna Brigida by Nicolò Alunno, kept in Foligno’s Church of San Nicolò, highlights the relationship between power and sovereignty. 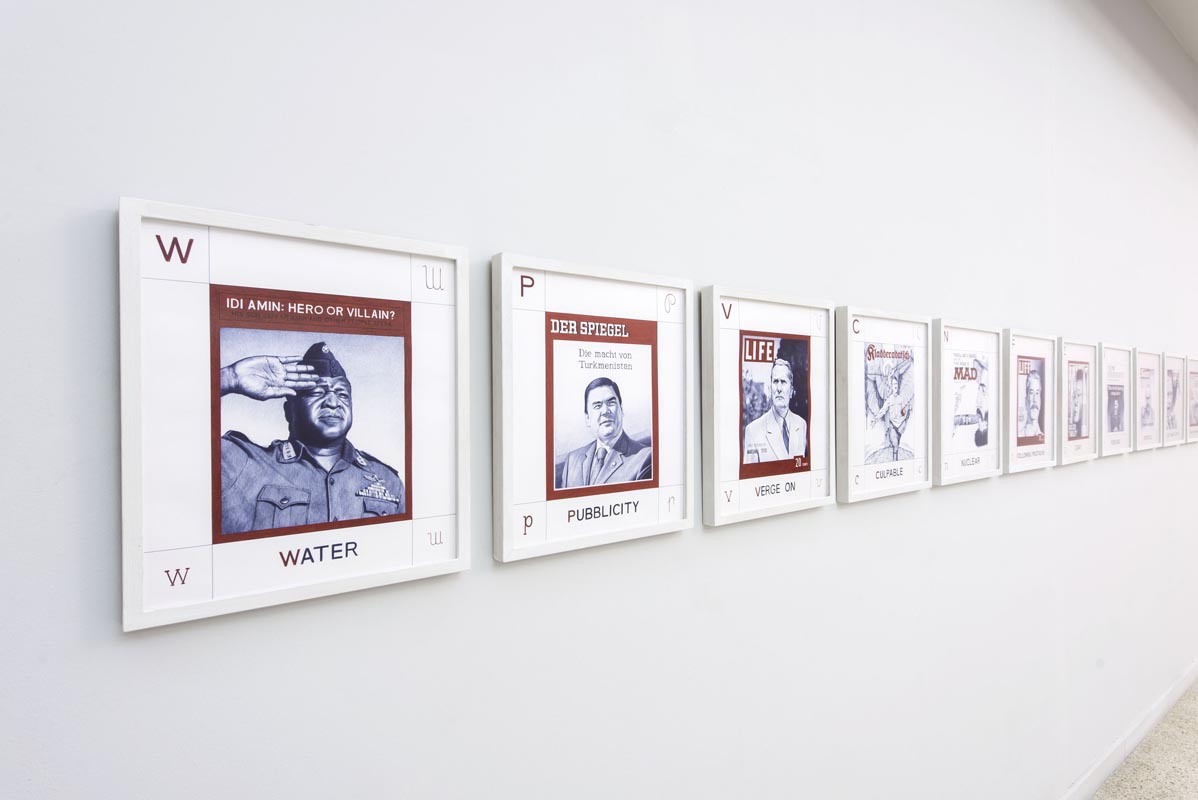 This work is placed beside six empty frames, made of white wood against a white wall, with information tags mentioning the authors’ names and details of the artworks they are meant to evoke, such as The Resurrection by Piero della Francesca, Raft of the Medusa by Gericault, Liberty Leading the People by Delacroix, The Fourth Estate by Pellizza da Volpedo, We Are the Revolution by Beuys and Guernica by Picasso – past events updated for the present. Viewers are called to act responsibly in their response because the empty space is filled by their forma mentis, mentally recreating the work in order to see it, referring back to their imagination and conscience. 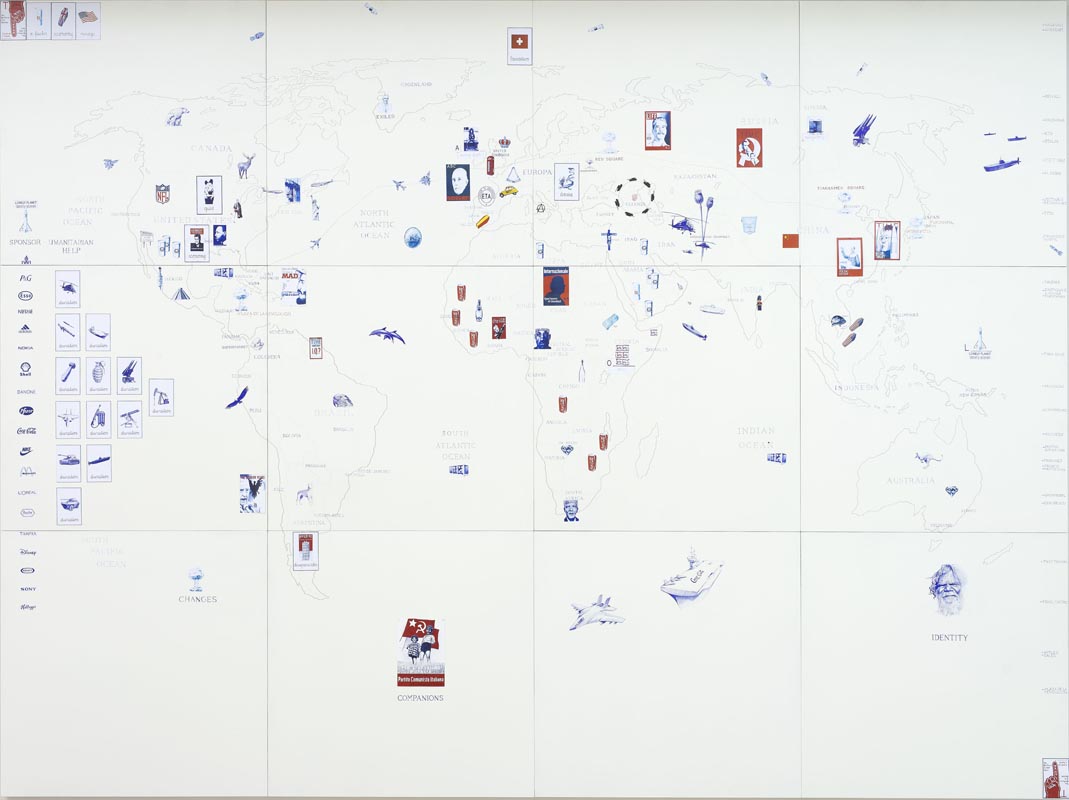 Another installation, made with foam and oil paints, reinterprets Rodari’s sentence, redesigning the possibilities offered by the sky while Finite straight line is a three-dimensional toy truck with the writing Emigration Made on the side, like the truck featured in the Coke advert, and a remote control meant to make an ironic statement on the trucks transporting migrants. Finally, visitors can watch the video of the important piece, Greetings from L’Aquila, which explores the devastating earthquake of 2009 – the names of the 308 victims feature in the end credits, lasting the time of the tremor.