Journey into the intelligence of materials.

Parallel Minds, a book by Laura Tripaldi, a young neuroscientist, is a journey into the intelligence of materials.

A book that is so specific and, at the same time, so transversal that even those who are not in the sector will find it fascinating and, above all, will have their perspective changed. And from this change of perspective many other things will be changed in turn. Material science, the most tangible discipline that can be imagined, crosses the world at all levels and traces the ecosystem and the configuration of complex systems in its dynamics. Materials, humans and other species coexist, contaminate each other and endlessly interact with each other.

Interface is a word that has become increasingly popular in recent times. Desktop and data visualisation are just some of the interfaces that are intended as portals connecting us with an “other” world. We have always interpreted the interface as a borderland dividing space and dimension. In reality it is also a place of exchange. And this is precisely where Laura Tripaldi’s vision begins, as she explains the nature of this zone, starting with chemistry, in which the interface is defined as a region where two substances with different properties meet: “The interface is not an imaginary line dividing bodies from each other, but rather a material region, a boundary zone endowed with mass and thickness, characterised by properties that make it radically different from the bodies that produced it.” (p. 18)

It is from this region, and starting from myths – first and foremost that of Arachne who weaves the web that opens and closes the book – that Laura enters the world of horizontal intelligence, that of materials as well as plants and fungi.

The myth of Arachne makes an “implicit” truth explicit, as the author herself points out, namely that material cloth is as inseparable from its weaver as technology is from man. And it is the structure of the web, as well as the technology of man, where part of intelligence has become decentralised, just as decentralised is the intelligence of the spider and of many other species, such as the octopus or mucilaginous mould that reason with form by modifying their bodies to build complex networks.

And while we imagine such fascinating and distant research, Laura Tripaldi explains that many studies relating to society are based on this intelligence, such as the calculation of routes in relation to traffic flows in urban centres or in other areas that regulate our lives. Some artificial materials also reason with form, so-called smart materials.

But the organisation of matter also involves dynamics, energy and a delicate interplay of balance and imbalance between inside and outside, between organisms and the environment. This extended ecosystem also includes the technologies we have produced, the canvases we have woven. This was also made clear by Paola Antonelli in an exhibition at Moma in 2008, which included responsibility for what was produced in the designer’s work and launched the study of organic forms into the new ecology of the future.

Some dynamics applied to nano-science seem to suggest macro-scale actions, such as the possibility of facilitating processes bottom-up rather than vice versa, as human intention and technological application might be understood.

“The best way to exploit a material system’s capacity for self-organisation is to relinquish direct control of the other, allowing its relational structure to emerge in all its complexity.” (p. 119) 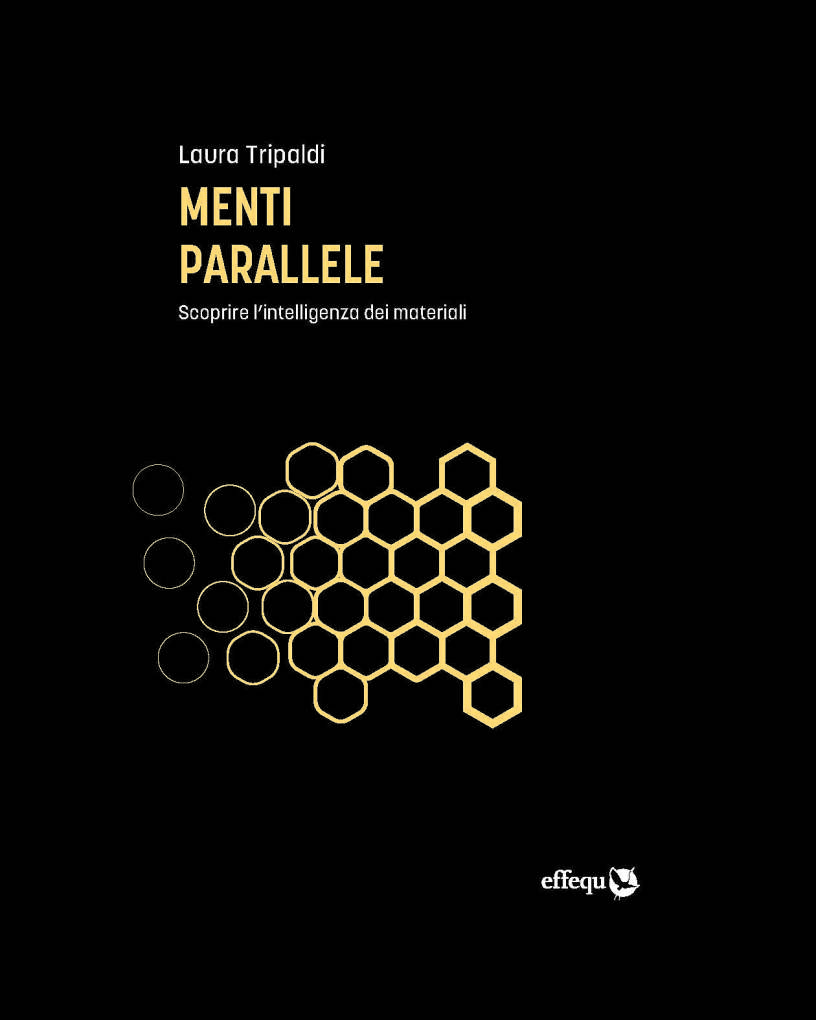 The book is an authentic journey that travels in and out of myths to find its origin in reality, that which is reduced to a nanometric scale, that which increases in size to the dimension of man and the system he inhabits. The anthropocentric man has lost his centre. In fact, it is possible that only in one’s imagination has a centre ever been occupied. Now he must take note and change his perspective.

All this emerges from the most basic material aggregation. So, it is just a game of scale. But the vision of this young scientist is a long way from being apocalyptic.

“We awaken from the age-old dream of human dominance over nature to plunge into new dreams in which, far from being alone, we find ourselves joined by a multiplicity of unexpected and friendly life forms.” (p. 184) If even our mind, like that of the spider, is inextricably intertwined with our technologies, building new materials means, above all, inventing new ways of relating to the world, new ways of seeing and feeling the matter surrounding us, which is produced when our intelligence encounters other minds (p. 202).

1 M under the Metro