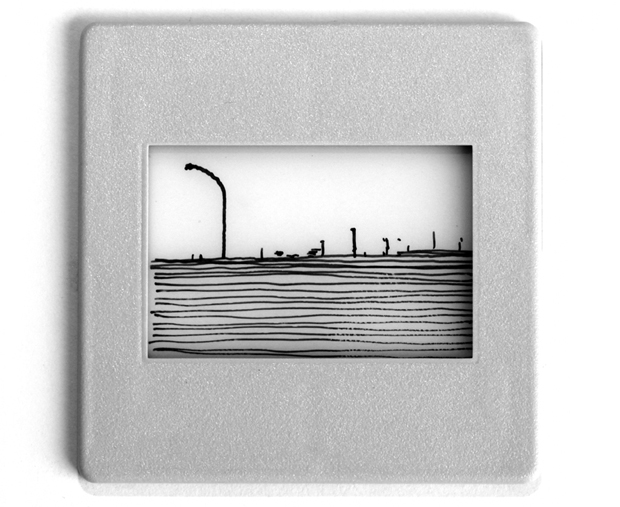 Mi disperdo e proseguo lasciandomi indietro un passo dopo l’altro (I am scattered and go on, leaving one step after another in my wake) is Luca Pancrazzi’s solo exhibit curated by Pietro Gaglianò and hosted at Milan’s Assab One. The exhibit features works being presented for the first time and drawings, objects, sculptures, photographs and slides, newspaper clippings, images that surfaced from the archives, a film and a long frieze which  have been gathered together to explore the theme of travel, landscape, archive and time. «Artists (who must always be imagined carrying their ‘Phoenician map’ around with them, containing objects and guiding the journey it has been drawn up for) involves two tensions: the synthesis between the means and the vision, through which art reveals itself, and the launching of perception into analytical development which enhances and extends the possibility of the work’s signification on a formal, sensitive and cultural plane». (Pietro Gaglianò)

The title of the exhibit is the same as a film presented here for the first time: a monumental sequence of a 35-metre-long drawing. Mi disperdo e proseguo lasciandomi indietro un passo dopo l’altro is in reference to the constant activity of our gaze and to its focus upon shapes of the landscapes which are sometimes tampered with and rerouted from the interior request for synthesis, from the processes of translation that the conditions of the chosen medium must also be subjected to. Gaglianò explains in his critique that «A line along the horizon runs for an 8-hour sequence that depicts a drawing traced on a roll a receipt paper. Overlapping signs make up the uninterrupted landscape presented on screen: the journey unwinds along a peri-urban road articulated by vertical street lights, blocks and infrequent groups of trees. The film reveals the error of the mark left by a pen: the calligraphic relapse opens up the horizon and in this large dimension, it becomes a peripheral view that withholds shapes distorted by speed».

The central area of Assab One is filled by an installation inspired by a recycled work of observation and reconstruction that features images, texts, models which were recovered or had surfaced from the artist’s archive and a long frieze that can be seen in portions on the walls; all of these elements redefine Luca Pancrazzi’s imaginary atlas. Fili da me lontano da te (Wires by me far from you) visualize space through the measure given by dozens of lead wires hanging from the ceiling, previously presented in other occasions and now introduced in a new and extended version. Restituzione di paesaggio (Restitution of a landscape), on display for the first time, projects a sequence of slides from within the exhibit space towards the city and the outer landscape, only without a screen to hold the images: a flow of images collected over the years and now returned – in an unconventional way –  to the sphere in which they belong.

With his Mi disperdo e proseguo lasciandomi indietro un passo dopo l’altro, Pancrazzi enters a scope that is almost Debordian – of super-urban dimensions, however – which gathers, recovers and creates glimpses of a landscape and intervals of time resulting in a complex vision. The visitor will have to contribute to putting it back together, re-fastening suggestions and directions, walking through Assab One several times.