by Arshake
in DIGITALIVE18, focus, News

For DIGITALIVE18, Marco Donnarumma, in collaboration with Margherita Pevere presented Eingeweide, a visceral choreography that stages“ a discourse of intimacy with the non-human and the machine”. Their partnership – in art as well as in their private life – comes together for the first time in an intense and symbiotic performative duo. From their base in Berlin, Donnarumma and Pevere pursue two different but complementary artistic and academic paths.While Donnarumma’s formative background is oriented towardsbody art, music, robotics and “performative art from the point of view of an intense corporeality”, Pevere comes from the humanities, environmental politics and media art. They share a specific interest in organic and technological processes and the relational forms these can generate.Their original trans-disciplinary language “attempts to integrate all these aspects organically.” 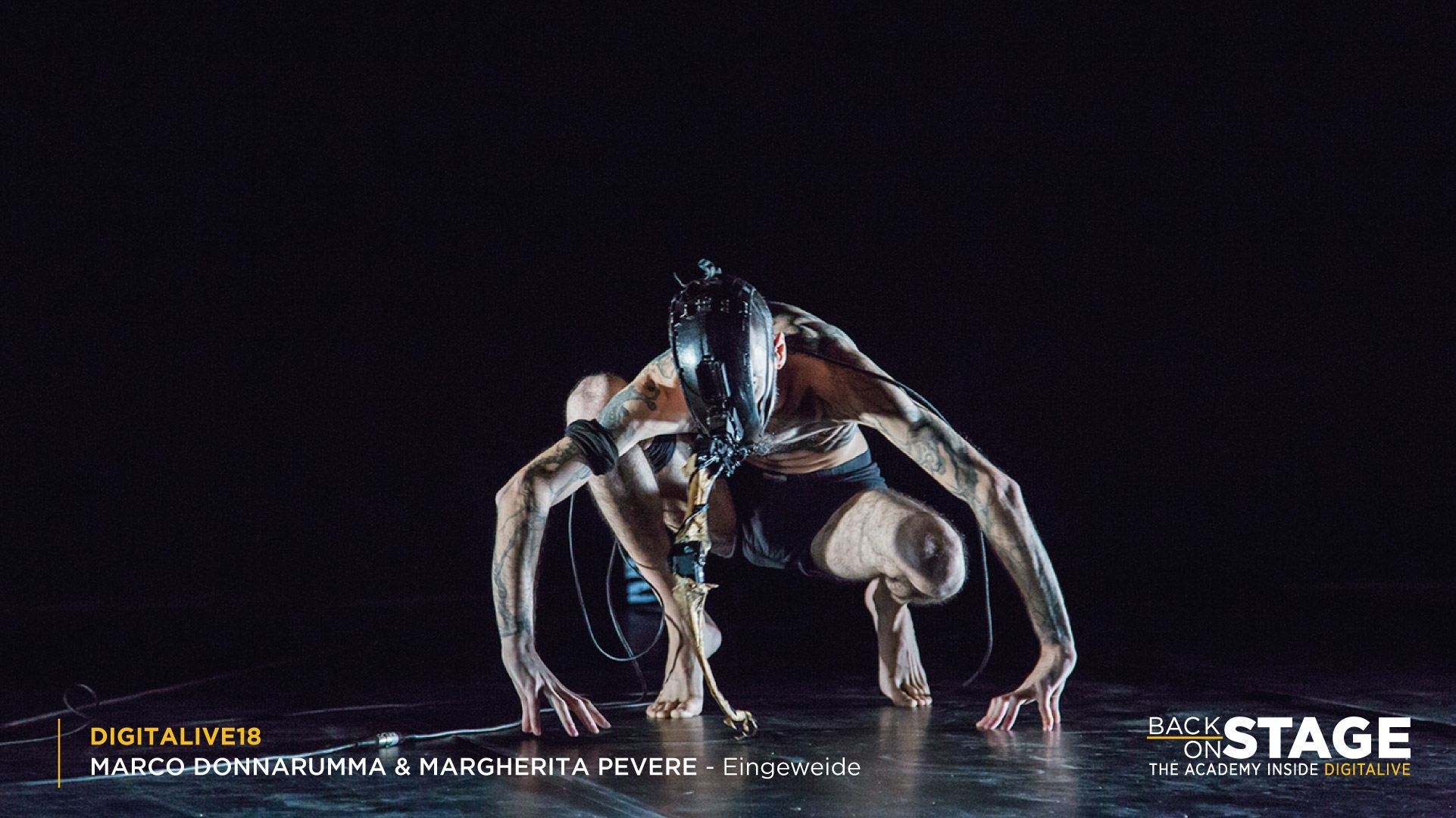 On stage, a new life form is moving. Two bodies, strapped together, form a new being about to be born. A delivery, a genesis, then a separation. The creature divides into two and discovers the world: on the one hand, the artificial world of technology; on the other, nature’s organic dimension. Donnarumma meets Ray, an artificial prothesis similar to an elephant’s trunk, with neural networks imitating the sensorial-motor system of animals, allowing Ray to respond to stimuli spontaneously. 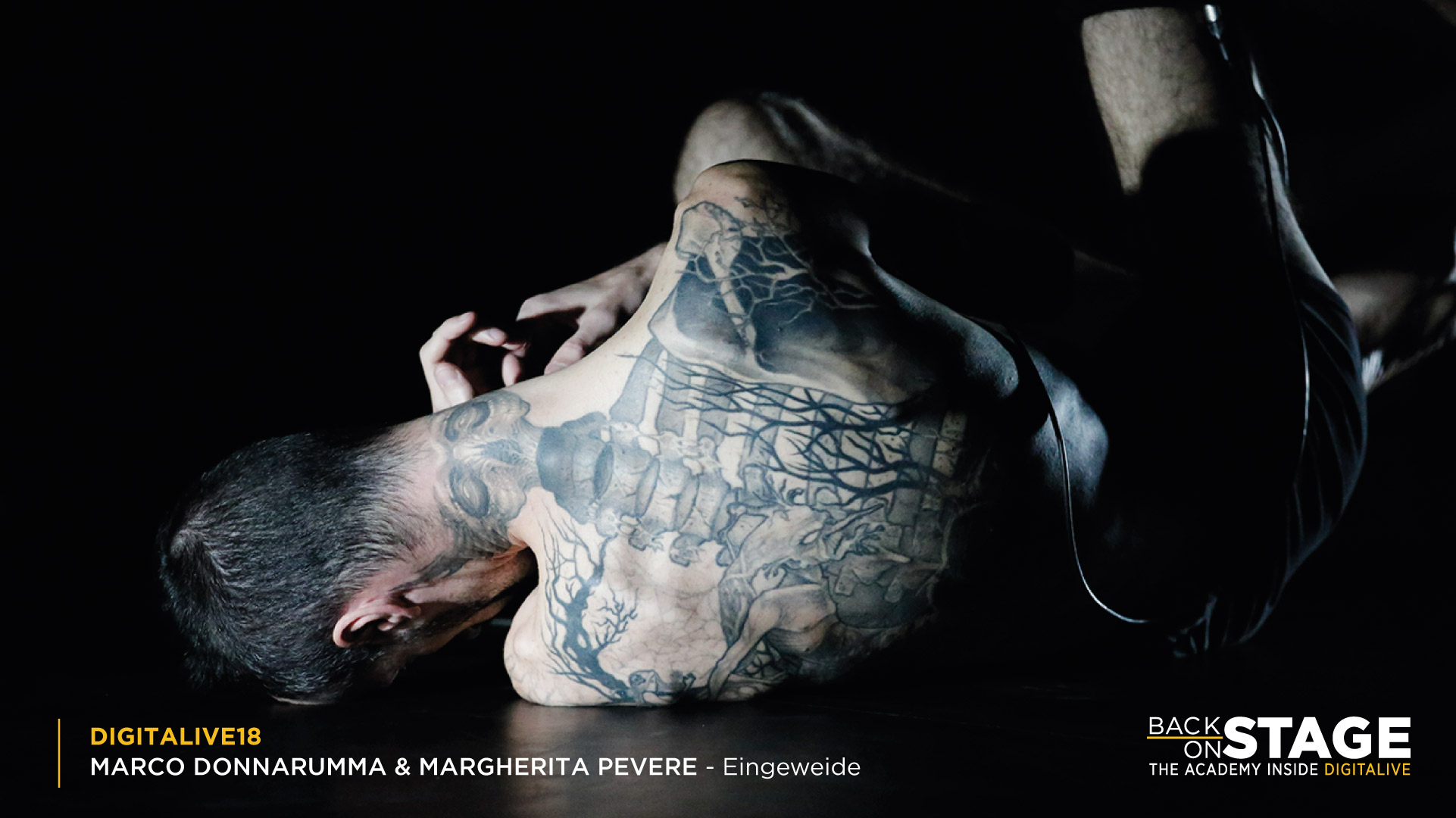 Each movement of the artist’s tattooed bust reverberates in space thanks to a complex system of biosensors which capture the movements of his muscles and organs.Margherita Pevere, her face hidden behind biofilm – or bacterial cellulose- searches in the white heaps of salt for those places “where there are leftovers and friction between our existence and other living forms which surround us”. While Donnarumma becomes one with the machine, interacting in ways that express kindness, intimacy and conflict, Pevere unites with the biofilm, which “in a powerful and ambiguous wayresembles skin andguts, but has nothing in common with the body of mammals or animals. This body is completely alien, but also estranging because one can recognise one’s self while, at the same time, finding it repulsive.” 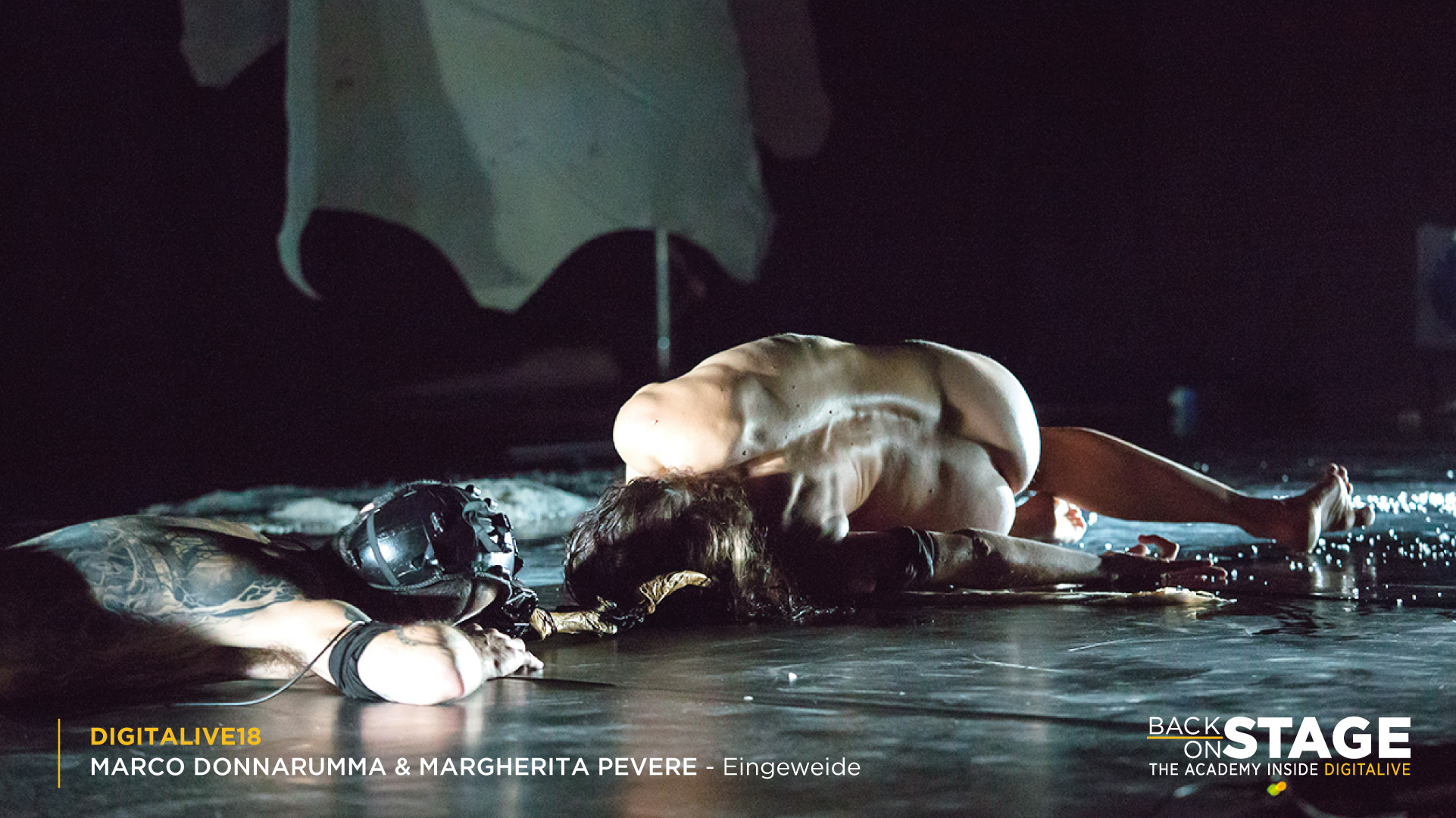 Eingeweide is part of the cycle7 configuration which “sets out to tackle the theme of man, machine and non-human coexistence from different perspectives”. A fusional, visceral relationship is established between artist and computer, between performer and organic tissue. This relationship generates a«sensual choreography» stimulating complicity, co-dependence and continuous exchange. Strongly alluding to physicality, Eingeweide – meaning guts –reconciles the biological nature of humans with the life forms surrounding them. “When relations are challenged, it is possible to find either a delicate or a brutal kind of intimacy. The history of the artwork emerges from these relations, while raising a number of questions”-questions that remain open, without fixed answers. This is because the duo “tries to avoid presenting a truth, tries to work on ambiguity to define slightly confused grey areas. Precisely because they are grey and confused these spaces challenge other notions we take for granted in our society.” 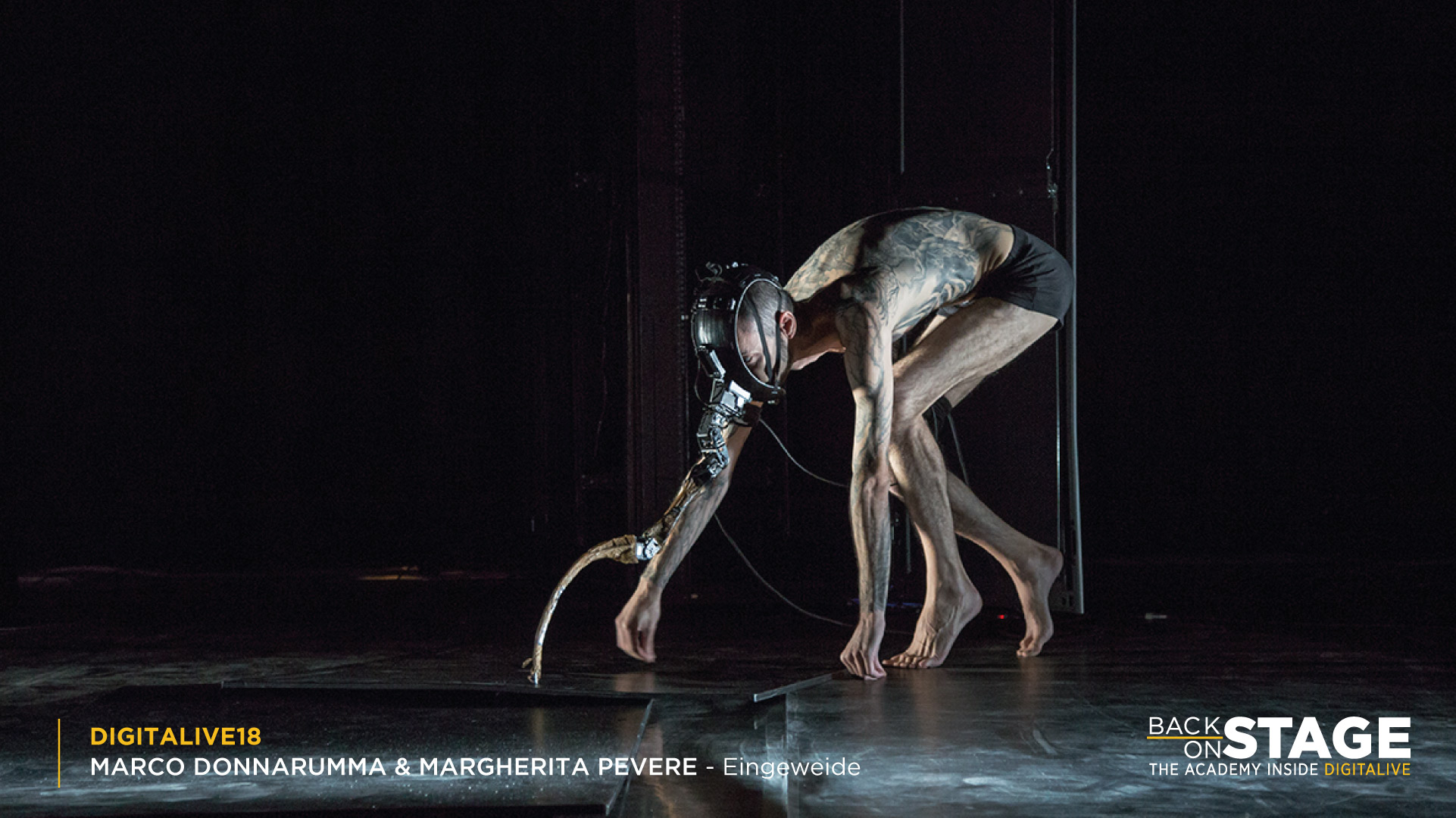 The mechanical skin of the artificial prothesis created by Marco Donnarumma, the organic skin made from microorganisms grown byMargherita Pevere, together with the animal skin hanging on stage, meet the artists’ bodies in a ritual dance echoing in the the Pelanda, a space once used to skin slaughtered pigs.

All the quotes belong to an interview released by Marco Donnarumma & Margherita Pevere to the students of the Rome Fine Arts Academy. The article is part of the special section that Arshake dedicates to  BACKSTAGE / ONSTAGE, the project that took 24 of the best students from the Rome Fine Arts Academy backstage during DIGITALIVE – a new format dedicated to digital art, curated by Federica Patti and part of the Romaeuropa Festival. Moving from backstage to front stage, in a Festival edition completely dedicated to performance and live events, students were involved in all the preparatory stages, from which they obtained material to be reassembled for this editorial project. The articles, published weekly, build a memory of the works and artists present at the event, capturing highlights from the ‘energetic’ performance works and also their protagonists. The content structure has been inspired by Antoni Muntadas’ Methodology of The Project, as suggested by Valeriana Berchicci.