Maria Adele Del Vecchio. Within, rather than above 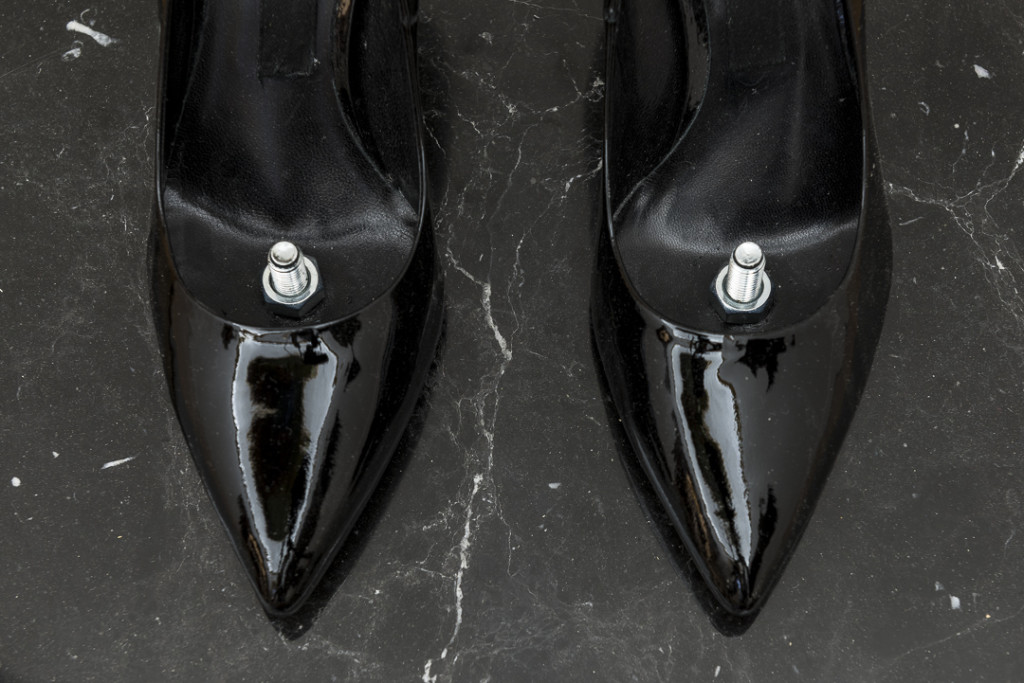 Within, rather than above: with this title Maria Adele del Vecchio has recently created, for the Galleria Tiziana di Caro in Naples, a visual essay, an iconic reflection, a bildhafte Denken (a thought for images, to be exact) which uses a series of varied techniques and materials to construct a formal catwalk at whose base is the principle of correspondence, personal growth and the evocation of memories through aesthetic cross-reference, rebound and echo. Del Vecchio’s is an essential work which places high value on linguistic plurality, the Babel-like nature of a phenomenon which, alongside the perfect layout of the pieces, sheds light on the diffused practice of installation and setting, an artistic process that with ever-growing insistence examines place and focuses on emotion and on the experience – both personal and passionate – of the viewer who contemplates it. 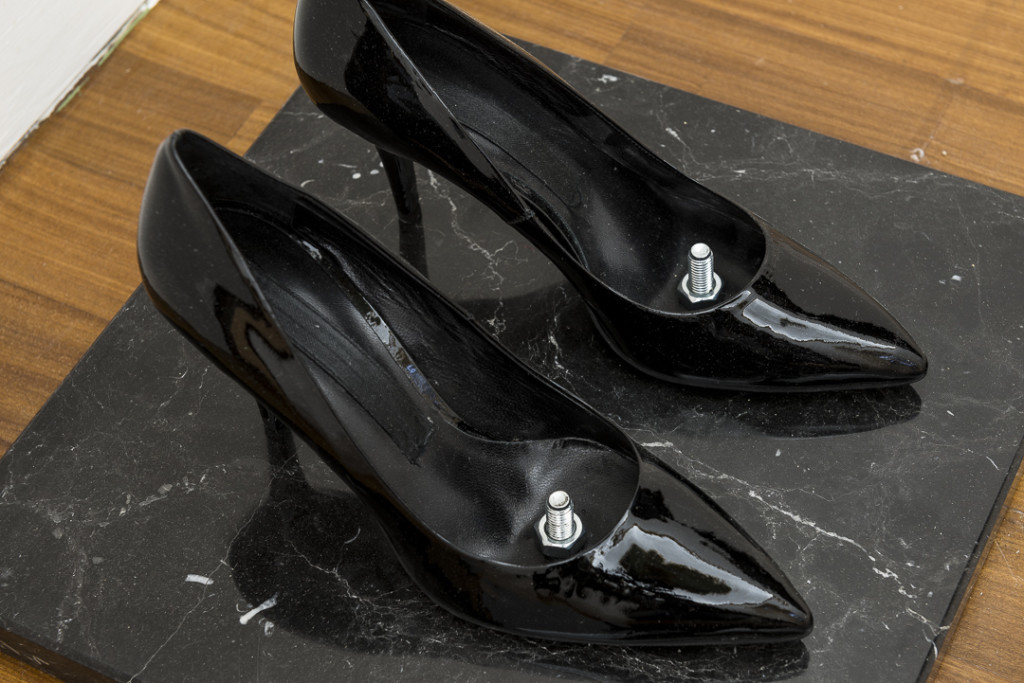 To open the exhibition, in a corner two shiny black shoes with stiletto-type high heels, a little femme fatale and all eighties elegance, are bolted onto a black marble base; these, together with a large dark wall-hanging (Black is the color of my true love’s hair), make up the first stage of a journey into the penumbra of life, a chronological and philological search for a lost sentiment to reckon with. Four parallelepipeds hold meagre debris, fragments of pink, black and white marble (to match the pedestals) which on the one hand evoke the memory of the sea of ice (Das Eismeer, 1823 – 24) – better known as “The Wreck of Hope” – by Caspar David Friedrich, with a desire to make three-dimensional and thus localise the work in form and space, in order to draw the viewer into the frame, while on the other hand address – and the title, General Semantics (Il naufragio della speranza (the wreck of hope)) makes this intention clear – a transemiotic process which, borrowing the theories of Alfred Korzybski, seeks to transcend the limits of human consciousness, test the territory of linguistic abstraction, work on the consciousness of abstracting and invite a new silence on the objective levels .

A photograph (Herstory, 2011 – 2015) reminds us of the 2014 neon work of the same name (installed in the office) which overturns the masculine derivation of the word history and gives history a feminine slant, “underlining an unresolved gender conflict and at the same time a reference to a more intimate history […] where the artist makes space for a personal search for identity”. 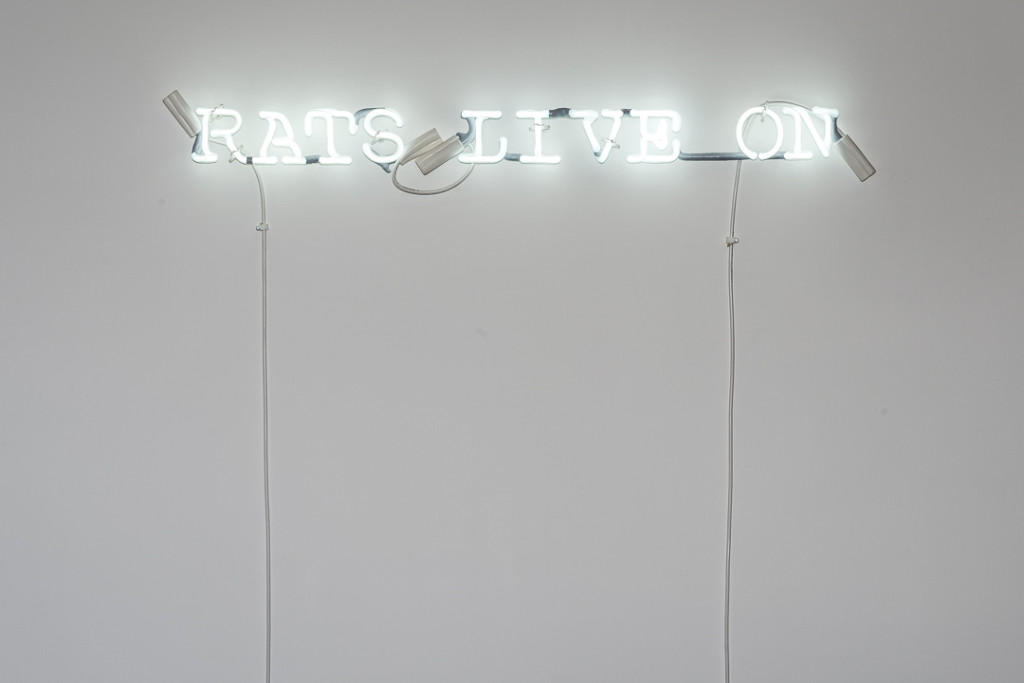 Corroboration of an eclectic and multi-linguistic approach is also found in the neon palindrome Rats live on (2015), borrowed from American poet Anne Sexton, and in a series of empty stereograms (Pollution #1 #2#3#4) where the viewer sees nothing but a dense interweaving of colours, and is asked to question the surface of the surface of the surface in order to perceive the uncertainty of things, the inconsistency of absolute truth. Similarly, the image of the viewer is uncertain when reflected in a mirror (Glittering scotoma, 2015) scratched to emulate scintillating scotoma, a particular visual condition – a kind of blind spot – which disturbs the field of vision. 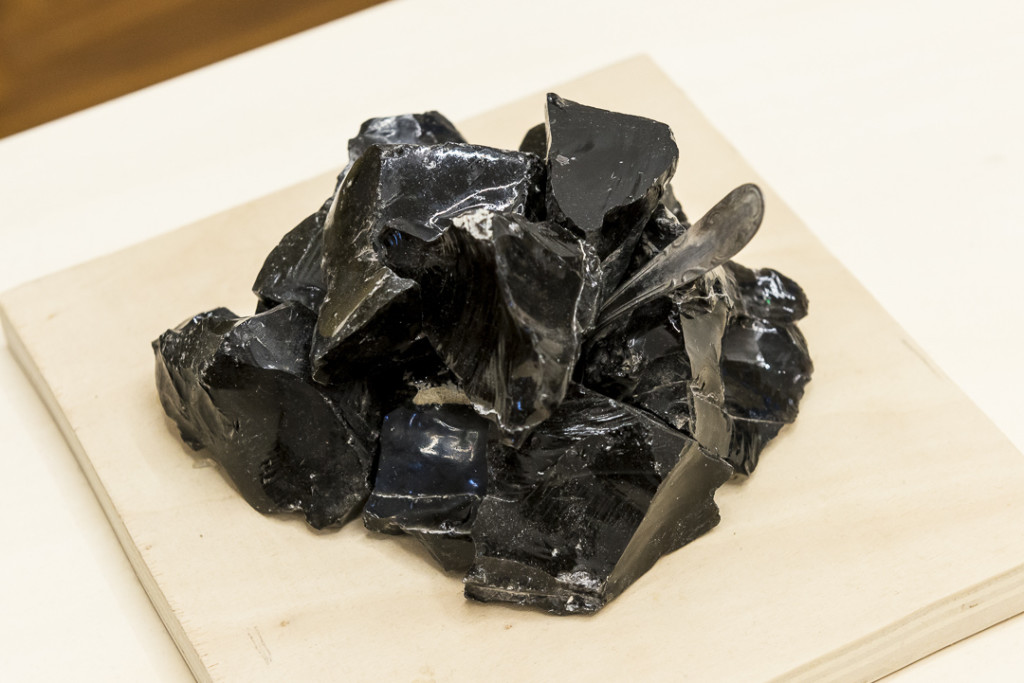 Just as when we replace an abstractly conceptual way of thinking with a sensory and image-laden perspective, so the 5 melancholies (Malinconia #1 # 2 #3 #4 #5) – crystal and amethyst, a coffee spoon with obsidian, a cup with mouldy coffee dregs, a collection of quartz and a brooch with black quartz – suggest a shift of emotions, a leap of memory, an autobiographical stitching-together which the artist uses to blend and homogenise, in a single aesthetic continent, several semiotic galaxies, to evoke present and presences through potent visual gymnastics that centrifuge history (stories) and its thousand variations.

This review refers to the show: Maria Adele Del Vecchio, Within, rather than above presented at Tiziana di Caro Gallery in the spring 2015