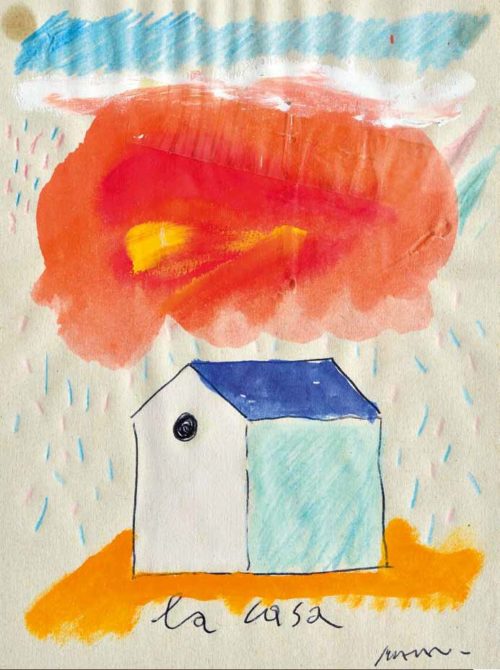 All produced between 2010 and the first half of 2020, the works presented by Nicola Maria Martino in this new solo show dedicated to the silence of the Levant Sea and a sense of nostalgia that can be perceived as Ungaretti-like cheerfulness, draw a visual itinerary in which colours are “crisp”, adhering to a mental vision of painting understood as excavation and conquest, as discovery. Corners of colour – perhaps kites – on the edge of large red, green and blue squares, ice-creams lying in the sun, forgotten islands and solitary towers, polychrome boats and aeroplanes that recall the story of Antoine de Saint-Exupéry’s Little Prince uncover a metaphysical and fairy-tale world (a clear reference to de Chirico’s The Return of Ulysses), irresistibly impenetrable, that comes to terms with the hidden place that is memory, with the daydream and boundless dream of painting, with the caravan of time where you can see the enchantments of a child (a human figure never appears in these works, even if you can make out a reference) who still dreams of being dragged away by the clouds or even the promises of future wonders cultivated with the sweetness of melancholy. A polyptych composed of six vertical modules (80x20cm), where everything is erased, swept away by the artist’s long brush, and nothing else remains except a musical scale consisting of colours. The display of artworks opens with a text (reported in full below) written specifically by the artist for the exhibition. (form the italian press release)

“Aeroplanes in the clear sky tell of acrobats in the Ionian air, they come from the Levant, they carry the sound of harps, they know of Odysseus and ancient Macedonian warriors. The lake’s saltless water surrounded by bushes of ruby-coloured mulberry… I return home late. Bring me a flower, bring me an umbrella, bring me more stories. I will offer you some wine from Tikves and I will think of new colours. Blue and red, pink, silent flocks. A drop of water fell on the plum tree. One warm morning we played to the march of drums… I hid among the yellow flowers and at dawn they were waiting for us at the port of Vlora in dark clothes… they spoke in a foreign language. And from there, we reached Ocrida and then rested. We were offered Koran dishes. Oriental sounds, harps and mandolas compete in the wind and we celebrated. The peach blossom and fresh April flowers are celebrated. With you I will learn to dance, together, in colour“.
Nicola Maria Martino (12 September 2020).

(entrance upon appointment, 5 people a time | write at the following e-mail in order to register: antonello.tolve@icloud.com)