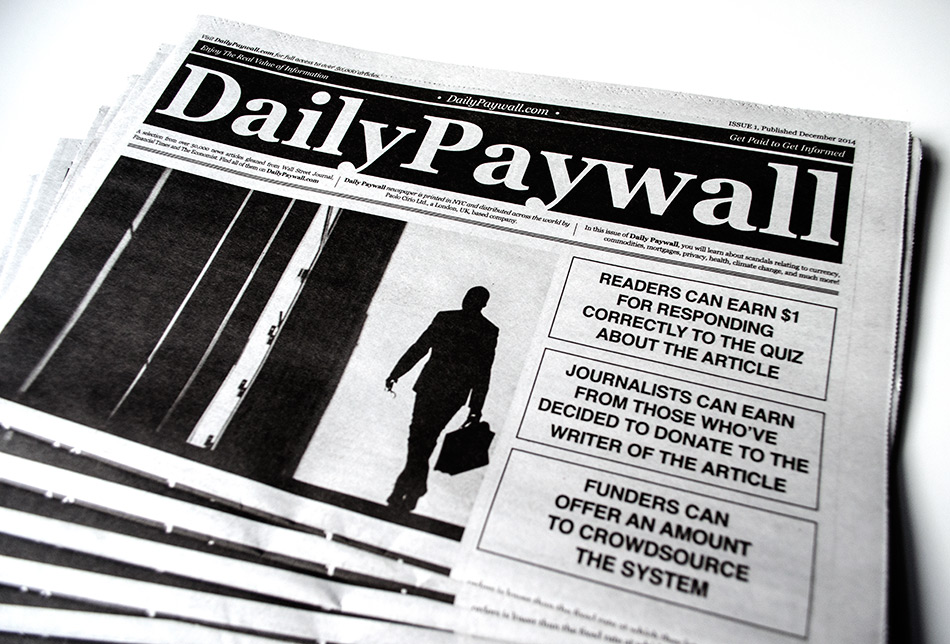 To celebrate 15 years of socio-critical Internet art practice, Paolo Cirio re-launches DailyPaywall.com with over 60,000 articles from the Financial Times, the Wall Street Journal and the Economist available to all for free!

This conceptual artwork critiques today’s information economy by reconfiguring and embodying the dynamics of the conflict over the control of information’s ownership, labor and sharing. DailyPaywall.com was online for a few days exactly a year ago until a legal threat from Pearson PLC took it down for copyright infringement. Meanwhile, Pearson sold the Financial Times and the Economist a few months after this letter.

Now, DailyPaywall.com is back on a safe new server, challenging unfair copyright laws once again by claiming fair use of over 60,000 news articles that should belong to the public. The pirated content from all 2014 won’t be indexed by search engines, yet, as in any public library, it’ll be available to students, researchers, journalists, cultural producers, and anyone who can’t afford the subscription fees imposed by those giant publishers, thereby overcoming economic and linguistic barriers to crucial information.

Daily Paywall was created as a media performance scripted and staged to involve a wide audience into a commentary on today’s information and sharing economy. The paid-to-read model is a creative economic model that engages with alternatives of social systems that needs to be reimagined. At this time, the crowdfunding and payments system won’t be enabled due to a lack of resources that limits the restaging of the online performance. More on Daily Paywall media performance. (from the press release) 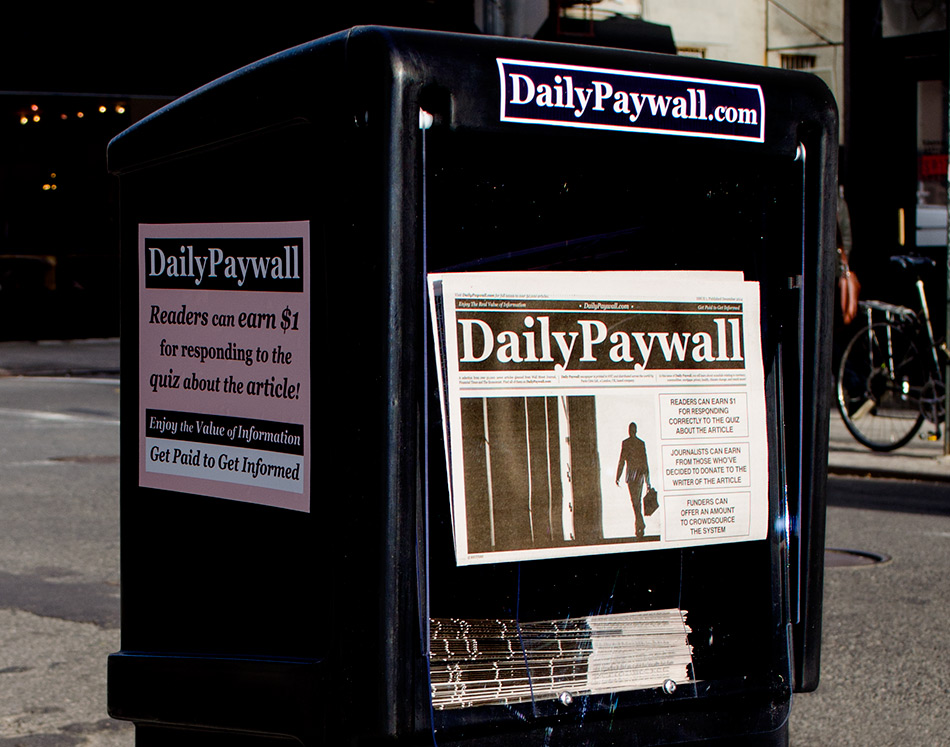 Paolo Cirio. In 15 years of activity in art activism and hacking, Paolo Cirio has always aimed to create meaningful art and address critical social issues.It was 2001 when he started to edit a large web project against the wave of militarism of the so-called War on Terror, and launching anonymous DDOS attacks against NATO’s website. It signed the beginning of Paolo Cirio’s international and independent activity of working with critical information surrounding international social issues and involving the public in creative forms of interventions toward social justice and a critique of information society.2015 has been a great year with over 25 exhibitions in 15 different countries at prestigious venues around the world, plus several lectures in conferences and art universities and three solo shows, at NOME gallery in Berlin, at Art Market Budapest and at Centre Culturel Bellegarde in Toulouse. 2015 started with Overexposed, a project about the dissemination of unauthorized photos of high-ranking U.S. intelligence officials who advocated for mass-surveillance. The art intervention received wide press coverage with over 15 reviews on German national newspapers and beyond. The Overexposed series is currently shown in NYC at Pratt Manhattan Gallery and from Jan. 22nd at Art Fair London.2015 just ended with a major show at the Museum Academy of Art of China in Hangzhou with a huge installation of The Hacking Monopolism Trilogy composed of the artworks of Amazon Noir, Facebook to Facebook and Google Will Eat Itself. In honor of these media performances and sophisticated hacks, China offered a great opportunity to discuss the complexities underpinning the concentration of economic and informational power by global Internet monopolies.