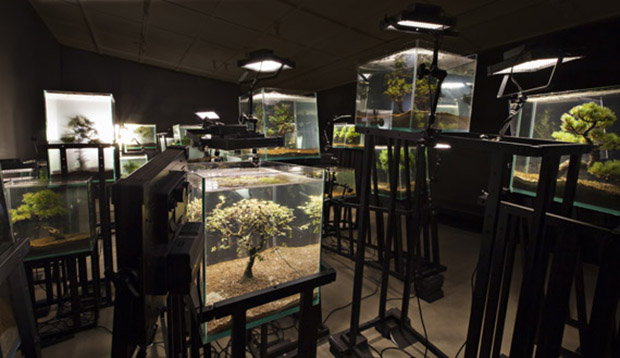 Elena Giulia Abbiatici interviews Mario Cristiani, confonder – with Lorenzo Fiaschi and Maurizio Rigillo of Continua Gallery in San Gimignano (Tuscany, Italy). Located in a former cinema, Galleria Continua has become the expression of an interest towards contemporary art which poses itself at the border between the market and research, between local and global, bridging past and present, recognized artists and emerging ones.

Elena Giulia Abbiatici. In her novel The Dispossesed – An Ambiguous Utopia (1974) the great science fiction writer Ursula K Le Guin imagines a double planet consisting of two halves divided by an unsurmountable wall: Urras and Anarres.  The former is a triumph of the capitalist, technological civilisation of money and work; the latter is the realm of ideological anarchism, based on nature and a deep mistrust of machines. It’s apparent from your choices as a gallerist that you love both these worlds, and seek to tread back and forth along the passage that links them. On one side, the market and the large-scale mechanisms you propose and run, on the other the anarchy of a small Tuscan town or the nature of the Parisian suburbs. In which world would you place yourself?

Mario Cristiani. Well you see, the further you move away from nature, the more you need to be in contact with it, to leave the logic of globalisation behind for a while. This is the aim of Galleria Continua and before that, Associazione Continua: to bring the two halves together. As we had no starting capital, if we hadn’t embraced the market, we wouldn’t even have survived, and so we looked for the cultural part of the market, fully aware of the costs involved in doing something significant on an international scale, in the public domain and the local area. 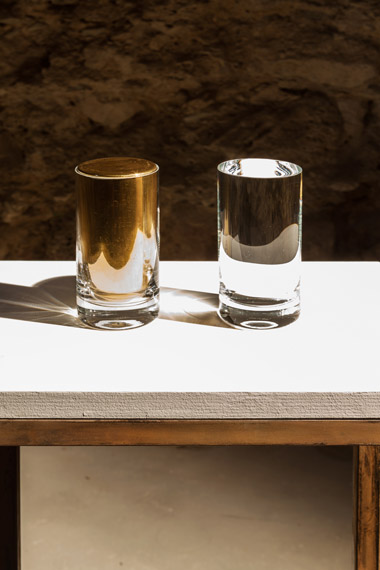 “Antifragile. Things that Gain from Disorder” then, to quote Nicholas Taleb: neither rigid opposition, with the risk of snapping, nor too weak an attitude, with the risk of suffocation. What difficulties has Continua encountered in Italy, Beijing and Paris?

In Italy there’s lack of awareness, in China awe and curiosity, in Les Moulins (Paris), possibility; and we’re thinking about a village that unites art and culture. 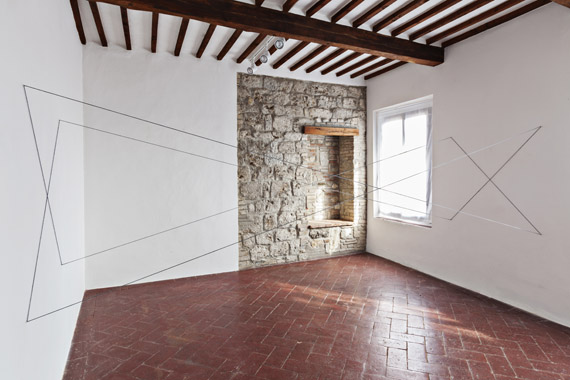 In Leviathan, the extraordinary work of political philosophy published in 1651, Thomas Hobbes symbolically depicts the state as the body of an enormous man, whose limbs are individual citizens. The authority of the state is the sum of individual liberties, which each citizen delegates, in accordance with natural rights. If we consider Leviathan as a system of art, which organs would you introduce to ensure the system can function, not in terms of what already exists, but in equilibrium with all its limbs?

Many galleries are going down the route of seeing themselves up as museums. We’ve taken a different route, linked to the potential of business, in other words to develop an idea of philanthropy with the private individual as starting point. We hope to get the private sector to cooperate with the public sector in a non-competitive way while retaining its independence. Get public administration to mediate the market through no-profit solutions to create a guaranteed public space. We need to find this synergy between public and private, encourage the production and donation of public artworks, create situations that facilitate relations between public and private, slim down procedures and collaboration, sponsorship and donations, for example. Above all, reduce paperwork and certification. The risk with all these difficulties is a widespread cultural impoverishment.

At Centre 104 in Paris, you celebrated your gallery’s 25th anniversary with the exhibition “Follia Continua”. The image on the invitation, by Pascale Martine Tayou, showed a large Vitruvian man enmeshed in a network of threads, a simple and primitive depiction of contemporary man. Mona Hautoum presented a reflection on the Web and its structure. How do you think internet has conditioned the contemporary art system? Most of the Galleria Continua artists work between art and politics, addressing social imbalances. It’s a form of activism, side by side with hackerism. Have you never been interested in artists who deal above all in digital aesthetics?

For me, an artist is an artist and a medium is a medium. If an artist does not speak to me, there’s nothing.. 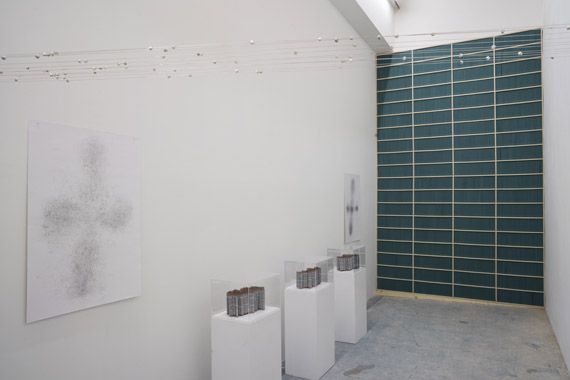 In this ocean of images, how can we have a vision that will last?

Our gallery is called Continua, and so in my view the secret lies in trying to unite past and present, giving continuity to the past. Above all it’s art as a stitching together with life, it’s continuity between imagination and calculation. Art as a form of reaction and reflection on concepts of value, economy and environment. This is the case with the exhibition now concluding in San Gimignano, which saw Brazilian artist Cildo Meireles team up with the Various Artists collective (24 fictitious artists) to develop a dynamic defined as “Q&A” – “Questions/Answers”. The questions posed concern water as the oil of the future, the concept of value split between economics and symbolism, and mathematics as an aesthetic means of achieving beauty. 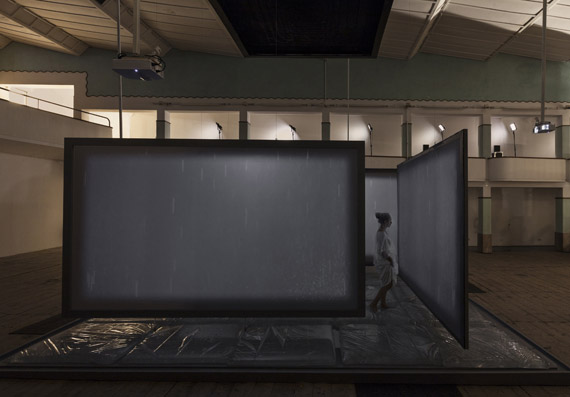 Chove Chuva by Cildo Meireles is an immersive installation consisting of four large screens; when the viewer enters the space created by them, it rains water; a scenario both apocalyptic and alarming which turns a spotlight on one of the many consequences of global warming and the rising of water levels. Various Artists responds with Agua Com Gas, aquariums containing bonsais which speak of the devastating phenomenon of land grabbing and speculative management of water resources in favour of certain areas and usually to the detriment of the poorest and most troubled lands. The discourse continues with Meireles’ Aquarum: two glasses, one filled with water, the other with gold, and a semantic shift to declare which of the two is really important. This is echoed by VA’s Googolplesso (10 to the power of 100), a kind of universal abacus to calculate infinite volumes of thoughts and knowledge. The dialogue closes with mathematics, a fundamental element in art since Egyptian times, and the idea of a harmony and beauty gained gradually at the cost of multiple calculations. And this time the Brazilian artist decides to subtract the concrete and construct virtual volumes, using only a few threads: in short, more of a mental concept of space than a material structure. After all, the invisible is everywhere, programming and controlling us. VA, meanwhile, devised workshops on the collection of data, with the aim of finding an inherent order within it. The task of the work is to find appropriate responses.The possibility for art is to make politics.