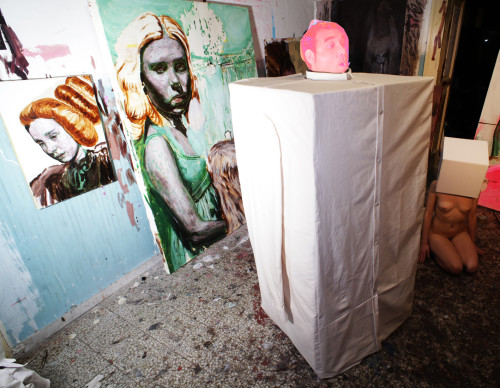 Ryan Mendoza is presenting Chromophobia, his last personal exhibition in Italy before his definitive (unconditional) return to New York. Bologna’s ABC gallery  is hosting this new and exciting project that lights up painting and invites spectators to interpret a land, the one of his origin which is increasingly more «complex, intriguing and abominable».  The departure from a profound re-visitation of Mendoza’s painting technique leads towards an aesthetic itinerary which tends to attribute unreal, immaterial and virtual properties to colour in order to display a series of fluctuating figures, weightless beings, images, shadows and irresistible models. 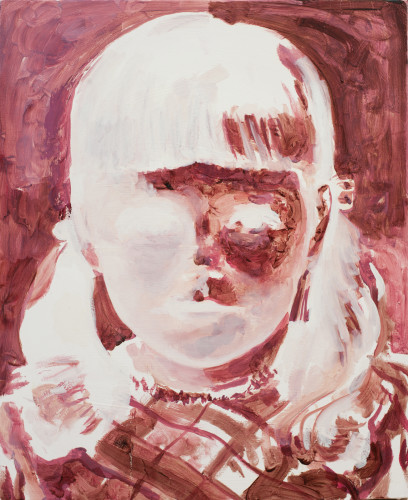 AT / You told me a while back that «painting is truly a primitive substance» for you. An ancient territory, a space through which one can recover close contact with the world of life and the «magic of reality». Do you still see it that way?

RM / Did I say that paint was primitive? I meant to say that paint is low-tech. Paint is any liquid that can be spread on a surface. So that includes ink. Writing is really painting. Books are paintings in black and white. Paint is so basic, that the evolution of language would have been enormously stunted without it. Paint makes man three dimensional.

Not to forget that man’s first letters, all of them were simple drawings. As I write this, every «A» I hit on the computer keyboard descends from rock paintings. «A» is for Aleph, the beginning of all things and «A» is for the Antlers of the Antelope, hot food on a stone plate, two bones pointing to the sky.

Ada Lovelace, the first computer programmer, loved to paint, she considered her computer program a painting in black and white, she considered letters, symbols and numbers, pictorially. If you were to take a digital photograph of a painting, she used to tell her students, as she had foreseen digital photography for one hundred years, you would be able to see clearly, its sequential numerical code. Computer programming is the evolutionary descendant of extraordinary refined painting. The innovations of technology are the result of artistic research, they are the result of a painterly quest for the miraculous. That feeling, the ancestral one, the voodoo magic of the cave paintings of bison and elk, and later, of church paintings- the search for truth, a solution, being engaged in the hunt for something, god or a woman, or a meal, it continues on our laptops. And while our method of painting, of creating meaning, as it evolves, as it becomes less and less recognizable, more ethereal, ever tinier, virtual, soon to be inserted into us and eventually to take us over, I pretend as if none of this is happening and I stretch a new white canvas.

AT / In contrast with the works displayed in your last personal exhibits – I’m referring to The Possessed (2010) and While You Were Away (2012) – this time we are observing an illuminated chromatic palette that becomes restless, dynamic and animated. What does this recovered chromatic verve represent in your artistic quest?

RM / I began painting just two colors together side by side. One painting, two colors. My teacher didn’t like my devotion with this one, single painting of mine. But I couldn’t seem to make two colors sit well together, so what was the point of me working with a full palette of colors, and then attempting to paint some object, a face, a tree in a forest. So I kept painting over the same canvas. For one year I painted over a single painting which consisted of two stripes of color. The painting built up to more than 30 cm of paint as I practiced my visual scales.

My teacher visited my little studio rarely, but when she did, she reprimanded me for not only having chosen to work with two basic stripes, but that I had limited my palette down to shades of grey, very close to white, and that all the work that I was doing was nearly invisible.

I assured her that I needed time to get the vibrancy right. You are scared of color, she mocked me. Let me take my time, I pleaded. Pull out some cadmium red and show me what you can do with it. Please don’t make me rush into things. Take off your caps and squeeze your tubes Mr. Mendoza. Oh, cant this wait? I have no experience in pushing colors into one another. Use your fingers, grab your paint brush, the bigger the better, and I will show you what you have been missing out on! 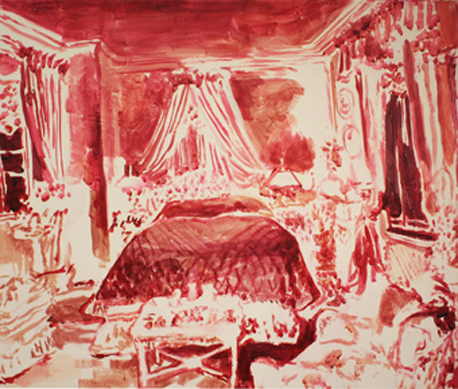 AT / These most recent works present a fantastic yet occasionally surreal scenario whose objective is to make figures appear on the surface and vanish at the same time. They look like shadows, images and ghosts that emerge, coming to mind like flashes and swift visions.

RM / There are moments when you walk sideways, through what you see. The walls drip, the floor turns into chocolate. The sky’s clouds can be eaten like cotton candy. The arms of your lover turn into pillows, and pillows turn into lingerie. A slip is made of rock, and the soft contours of a stone are lace. This is the house I moved into. Sometimes it lets me play my games. Sometimes I eat too much and have to sleep off the excess. But I look for the cracks in the walls, I peel down wallpaper, I stick my finger through where the paper has folded back and has given me a peek. There is a way to see the world as if you were on drugs. Abstinence and excess, take your pick, though alternating is advised.

Arshake wishes you a Happy Holiday!

Arshake wishes you a Happy Holiday!